The 2013 television series Hanzawa Naoki, which aired on the Japanese channel TBS, depicts a maverick banker of the same name who battles forces inside and outside his bank in dealing with the repayment of a huge loan. The exhilarating corporate drama came to an end in September, earning record ratings, but the tag line of its protagonist retains a firm grip on viewers’ minds: “When someone screws you over, pay them back double!” Taking a closer look at this show, which was addictive to so many, provides an insight into present-day Japanese society. 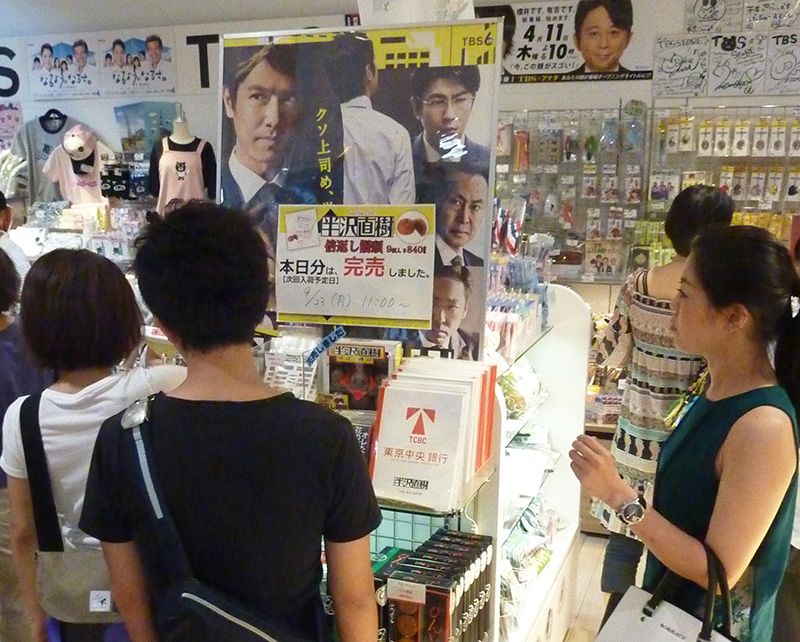 Official merchandise of the TV series flying off the racks at the TBS Shop in Akasaka, Tokyo. (Photograph courtesy of Nikkan Sports/Aflo.)

The TV series is based on two novels by Ikeido Jun, one of the foremost writers of “business novels” today—Oretachi baburu nyūkō-gumi (We Bubble-Economy Hires) and Oretachi hana no baburu-gumi (We Bubble-Economy Wonders), published in 2004 and 2008, respectively. Both novels depict the struggles of men who became bank employees during Japan’s economic bubble (1986–91). Two decades since joining the bank, the lead characters are now mid-career employees in their 40s, tasked with managing day-to-day operations.

The plot of the TV series is clear and simple, consisting of two narrative arcs. The first takes place in Osaka, where Hanzawa, as chief of the loans section of a bank branch, is forced to shoulder the blame for a bad loan of ¥500 million made by the branch manager. Boiling with righteous indignation, he manages to collect the ¥500 million, while brushing up against the branch manager.

The second narrative arc depicts Hanzawa after he has risen to the post of deputy director of the No. 2 Sales Division at the Tokyo head office. When he tries to expose the shady loans made by one of the bank’s managing directors, Hanzawa finds himself in the middle of a power struggle within the bank. The Financial Services Agency, which regulates banks, also enters into the equation, and the bank’s murky secrets are brought to light.

The series may be about bank employees, but their loyalty to the organization and their way of thinking are not much different from those of typical company employees in Japan. In both cases you can find the same sort of ambition, as well as envy and resentment. There are horrible bosses in just about any workplace, as well as coworkers who get in each other’s way. This is simply the reality of the corporate world, whether in the financial sector or elsewhere.

Two important plot elements in the series are unjust personnel changes and the taboo against disobeying one’s superior. These are also phenomena common to Japanese companies. The practice of loaning out of an employee that takes place in Japan is an approach that would likely baffle an employee of a global corporation. When a Japanese company assigns an employee to a subsidiary or affiliate it is often seen as a demotion, giving the employee the impression of being shunted off.

On the TV series, the branch manager tries to loan out Hanzawa to an affiliated factory in Thailand but ends up being sent there himself. In another scene, we see a colleague and friend of Hanzawa in a miserable situation at a company to which he was assigned. At the end of the series the president of the bank orders the transfer of Hanzawa to a securities subsidiary, presumably as punishment for his role as a “loose cannon” who exposed the corruption of the managing director.

It is rather disturbing how the employees at Japanese companies raise no fuss at such transfers; no one puts up a fight or makes any attempt to rebel. It does not even occur to them to appeal to a court of law, and none of them resign in protest to pursue better career options elsewhere.

Today, as Japan tries to keep pace with the advance of globalization, such conservative, self-denying workers are a burden, not a benefit. Employees and companies unable to fight back will simply be left behind in the global marketplace.

It seems safe to say that the overwhelming majority of “salarymen” who watched the Hanzawa Naoki series cheered on the protagonist. But it is as if they are making up for the shame they feel for not being like him. The high ratings that the series earned may in fact be a reflection of how far Japanese companies still have to go in adjusting to globalization.