On November 27, 2013, the Diet passed a bill to establish a National Security Council, which will serve as the command center for Japan’s diplomatic and security policies and national strategy. Modeled after the US National Security Council, it is known as the Japanese NSC. Under the leadership of the Kantei (the prime minister’s office), within which it has been set up, the council will engage in the timely collection of intelligence and in important policy decisions regarding foreign affairs and diplomacy. Its establishment marks a tipping point in Japan’s pursuit of peace and security.

Following the bill’s passage into law, the National Security Council came into being on December 4. In January 2014, the Cabinet Secretariat will set up a national security bureau as the NSC secretariat. To coincide with the council’s launch, moreover, the government approved Japan’s first national security strategy and a revised National Defense Program Guidelines on December 17.

Prime Minister Abe Shinzō pushed for a Japanese NSC during his first administration (September 2006–September 2007), albeit unsuccessfully. When the Algeria hostage crisis flared up in January 2013, a month after the second Abe cabinet was launched, the government was slow in collecting the needed intelligence for rescuing the Japanese hostages, exposing its lack of an internal structure for swiftly making decisions and taking action at times of crisis. The cabinet therefore set up the Advisory Council on the Establishment of a National Security Council in February and began the necessary preparations toward that end. 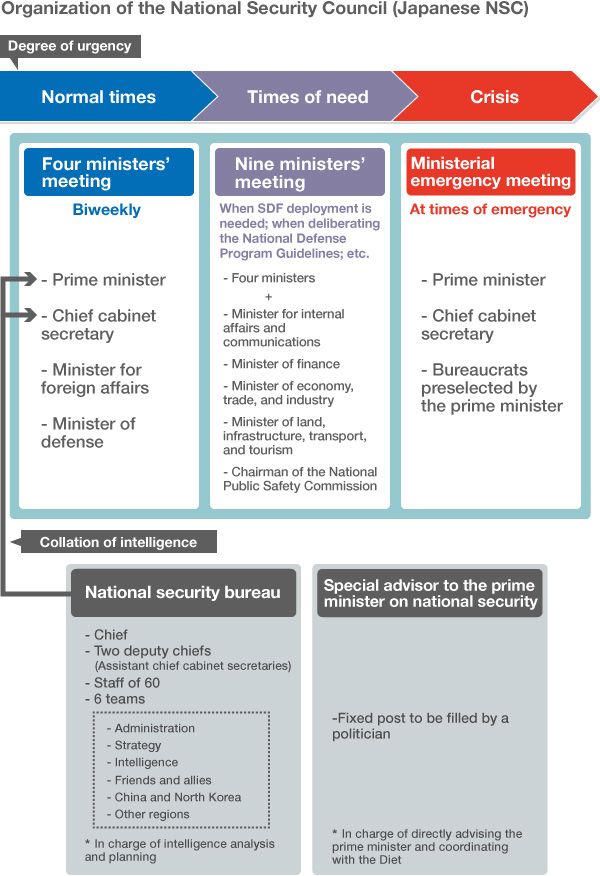 The backbone of the NSC will be the four ministers’ meeting, in which the prime minister, chief cabinet secretary, minister for foreign affairs, and minister of defense—along with the deputy prime minister—will generally meet once every two weeks. In the event of matters concerning citizens’ lives or property, a ministerial emergency meeting will be held to decide on a basic line of response. When the need arises to deploy the Self-Defense Forces, meanwhile, civilian control will be ensured by convening a nine ministers’ meeting of the four core ministers plus the minister for internal affairs and communications, minister of land, infrastructure, transport, and tourism, and others to determine what actions to take.

The national security bureau will be established to enhance the Kantei’s capacity for intelligence analysis, intelligence gathering and management, and other related tasks. It will be staffed by roughly 60 members loaned from other government organs, including the Ministry of Foreign Affairs, Ministry of Defense, and National Police Agency, who will be divided into six teams: administration, strategy, intelligence, friends and allies, China and North Korea, and other regions. Special Cabinet Advisor Yachi Shōtarō, who previously served as vice-minister for foreign affairs, is slated to become the bureau’s first chief.

Japan’s Intelligence Capabilities to Be Put to the Test

How well the Japanese NSC will function hinges on whether or not the Kantei will be able to set the direction of policy in an agile manner, doing away with the vertically organized structure of the relevant ministries. To that end, it is essential to enhance the national security bureau’s intelligence gathering and analysis capacity, and the new law explicitly mandates relevant ministries and agencies to provide information to the council.

Japan does not, however, possess a foreign intelligence agency independent of other government organs, like the CIA. Some members of the Advisory Council on the Establishment of a National Security Council called for the creation of such an agency, but the idea was dismissed.

Meanwhile, the Abe administration believes that sharing information with other governments is vital and that, as the NSC will have centralized control over such information, the recently enacted state secrets protection law goes hand in hand with the council’s establishment.