After a thrilling series of victories in the 2014 US Open Tennis Championships, Nishikori Kei lost in straight sets (6–3, 6–3, 6–3) to Croatian player Marin Cilic on September 8 (New York time).

The Japanese star, seeded tenth in the tournament, was a surprise participant in the final match, as was Cilic, seeded fourteenth. The Croat appeared especially strong in his surprise straight-sets victory (6–3, 6–4, 6–4) over Roger Federer in the semifinals, and interest was high in the final match, which was certain to produce a first-time champion no matter who won.

In quarterfinal play last week, the 24-year-old Nishikori beat the Swiss player Stan Wawrinka in full sets to become the first Japanese in 81 years to reach the semifinal stage of a Grand Slam tournament. (Satō Jirō made it to the semifinals at Wimbledon in 1933, his final Grand Slam appearance before his tragic 1934 suicide. For the US championships, you have to go back to 1918, when Kumagai Ichiya reached that round.)

And when he made it through the semifinal round, it was to become the first Japanese man—indeed, the first male player from Asia—to reach a Grand Slam singles final. 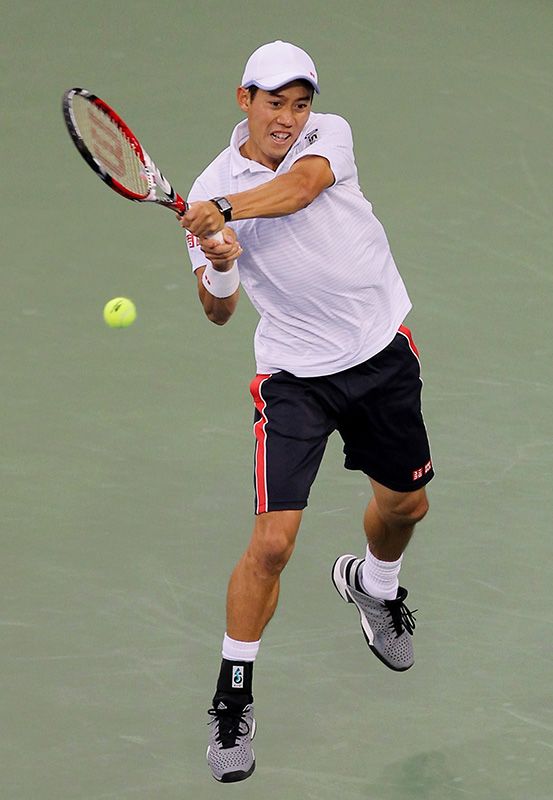 Nishikori takes to the air to return the ball in his final match against Marin Cilic. (© Jiji Press)

Nishikori’s semifinal match against the world’s top-ranked player, Serbia’s Novak Djokovic, electrified Japan. His four-set victory (6–4, 1–6, 7–6 [4], 6–3) on September 6 came in the brutal heat and humidity of Arthur Ashe Stadium—temperatures on the court hit 37ºC that day—but he appeared fresh and energetic throughout the match. Japanese tennis fans back home who stayed up into the wee hours of September 7, Japan time, were well rewarded with this victory by their nimble, mentally tough countryman.

Mental toughness has been an area of focus for Nishikori and his support team, led by the American coach Michael Chang, himself a Grand Slam champion with the 1989 French Open to his name. This toughness was especially necessary in this US Open. Nishikori was coming off of a procedure to remove a cyst from the bottom of his right foot as recently as August. Many were surprised to see him on the competitive court, much less dominating on it.

While he is certainly the country’s favorite son in the world of tennis today, he has not resided permanently in Japan for a decade. Nishikori moved to Florida in his early teens to train. It was in this environment, surrounded by the world’s top young players, that he developed his unorthodox style on the court, including his trademark leaps that allow him to hit from a higher point. His airborne play has given him the nickname “Air K” among his excited fans.

Also watching with great excitement from Japan was the clothing retailer Uniqlo, which inked a contract in early 2011 to become Nishikori’s official outfitter. Uniqlo, run by the firm Fast Retailing, does not sponsor many athletes, but it chose them well for this year’s US Open. Both Nishikori and Djokovic play in Uniqlo clothing, making their semifinal match “a Uniqlo matchup.” Fast Retailing CEO Yanai Tadashi was clearly pleased with the way the tournament shaped up, enthusing, “It’s a dream match.” On September 9, the company announced that Nishikori would receive a ¥100 million bonus for his second-place finish, with ¥50 million coming from Fast Retailing and the other half coming from Yanai himself. 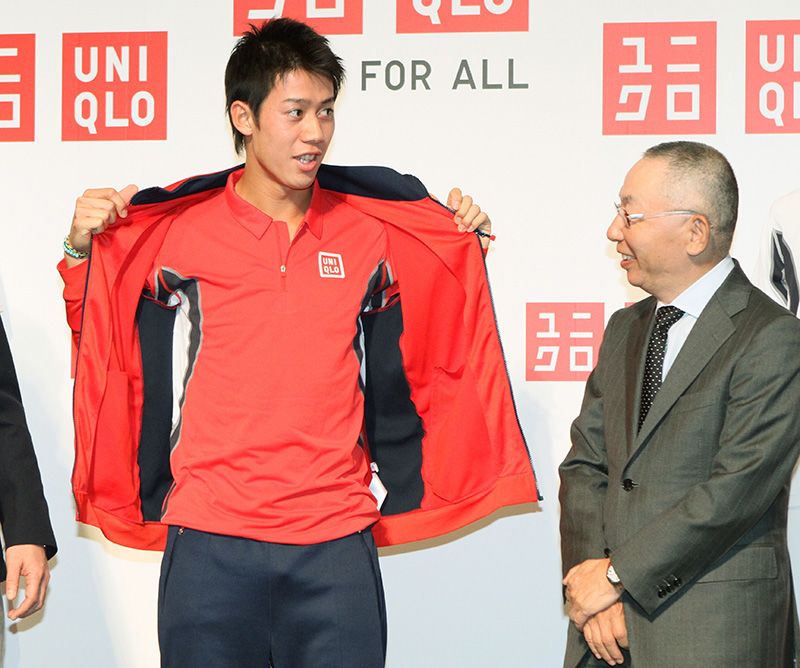 Uniqlo prepared a special run of the shirts worn by Nishikori and the wheelchair player Kunieda Shingo. As of the morning of the final match, these had sold out at the retailer’s website and the select outlets where they were on display. Japan’s tennis players have also made a run on the Wilson Steam 95 racket that Nishikori favors, with some Tokyo tennis outfitters reporting that they have been out of stock since August. And his other sponsors, including watchmaker Tag Heuer and noodle producer Nissin, have also seen their profiles rise thanks to Nishikori’s performance.

Another business benefiting from Nishikori-mania has been satellite broadcaster WOWOW, which saw subscriber numbers leap as viewers scrambled to watch its exclusive domestic broadcasts of US Open play. People without access to the pay channel made their way to sports bars (which extended their hours in scenes reminiscent of the World Cup soccer days) and, in many locations, gymnasiums set up for public viewing of the tennis.

Japanese Dominance in the Wheelchair Sport

Air K was not the only Japanese tennis player to perform well at the US Open this year. Two other Japanese team members are coming home with championships. Kunieda Shingo, the world’s top-ranked men’s wheelchair tennis player, beat Argentina’s Gustavo Fernandez in straight sets (7–6 [0], 6–4) to win the singles final match. He also paired with the Frenchman Stephane Houdet to win the wheelchair men’s doubles crown as well. Kamiji Yui, meanwhile, came out victorious (6–3, 6–3) in the wheelchair women’s singles final match against the Dutch player Aniek Van Koot, as well as teaming up with Britain’s Jordanne Whiley to win the women’s doubles title.