Former British Prime Minister John Major has urged Western nations and Asian countries, including Japan, to unite and take action against global risks and crises, as symbolized by ever-deepening confusion and conflict in the Middle East.

“Both Asia and Europe have an interest in events far beyond their own borders,” Major declared in a keynote speech he delivered at the UK-Japan Global Seminar, which was held in Tokyo on October 2–3 under the sponsorship of the Nippon Foundation and the Royal Institute of International Affairs, better known as Chatham House, with the cooperation of the Great Britain Sasakawa Foundation. This marked the second seminar, following the first one held at Chatham House in London in June last year.

In his speech, entitled “Security Challenges in Asia: The Relevance of the European Experience,” Major said, ”We live in a world that seems to become ever more perilous,” pointing out in particular “the mayhem in Syria, Iraq, and much of the Middle East, the fighting in Crimea, the military and political conflicts in Asia.”

Referring to security tensions in Asia, Major prominently highlighted “China’s military rise and her growing defense expenditure.” He welcomed China’s emergence as an economic power, but noted: “Less welcome is that China is expanding her maritime presence in the East and South China Seas, and in so doing, is creating tensions with, among others, Japan, the Philippines, and Vietnam. . . . The newly-expanded Chinese air defense identification zone adds to Asian concerns.”

There is cause for optimism, though. “Since 1945,” noted Major, “Europe has generally succeeded in bridging divisions that, in the past, threatened to divide the Continent.” He went on to indicate the role the multilateral institutions have to play. “The European Union, NATO, and the Organization on Security and Cooperation in Europe have each played a part in building trust.”

A central theme of the seminar was the search for potential areas of cooperation between Japan and Britain, or more broadly, between their regions. Major said, “At present, Asia looks at Europe’s experience in confronting security challenges to see if there are lessons to be learned. Perhaps one is that Europe could be more proactive in helping to resolve some of these challenges.” As a concrete suggestion, he offered: “The Asia-Europe Meeting has also been in place since 1996, and could play a more active role, both in resolving regional tensions and improving relations between our two regions.”

Major led the Conservative government from 1990 to 1997. He assumed the premiership just after Iraq’s Saddam Hussein invaded Kuwait and joined the United States’ war against the country. As one of leaders of the EU and NATO, he also struggled to resolve the bloody standoff in Northern Ireland and Bosnia’s ethnic war.

Meanwhile, on September 30 this year, Britain joined US airstrikes against insurgents in Iraq and Syria, including Daesh, the growing militant forces calling themselves Islamic State. In a question-and-answer session, Major was asked whether Western countries should send ground troops to the region. He replied that the ground battle should be won by Arabs, Kurds, and other forces local to the region. “If the West prevail on the ground, that will last for so long as the West are there,” he said. But he added, “I do think it is right” for the West to lend airpower, thus endorsing the series of airstrikes led by the United States.

On the question of expanding the United Nations Security Council, he insisted that countries like Japan, Germany, South Africa, and Brazil be allowed to join, saying that an expanded council “would become a more efficient and effective decision-making body.” He also criticized the current five permanent members’ veto right, which “hampers the efficiency of the United Nations.”

Tanaka Akihiko, president of the Japan International Cooperation Agency, cited countries like Cambodia and Nicaragua as “rare” successful cases which saw conflict end thanks to the existence of powerful leaders or that went through a democratic nation-rebuilding process involving elections. Inoguchi Takashi, president of the University of Niigata Prefecture, insisted that Japan should put stress on humanitarian assistance through UN institutions, as well as on the education field.

The discussion was also joined by other prominent panelists, including Adam Roberts, emeritus professor of international relations at Oxford University, and David Malone, rector of the UN University and under-secretary-general of the United Nations.

A Role for Japan in Refugee Issues

In the second-day sessions, Fujiwara Kiichi, professor of international politics at the University of Tokyo, noted Japan’s deep experience and expertise in refugee assistance. Japanese policy, he said, should center on humanitarian assistance, an approach different from those of Britain and the United States. 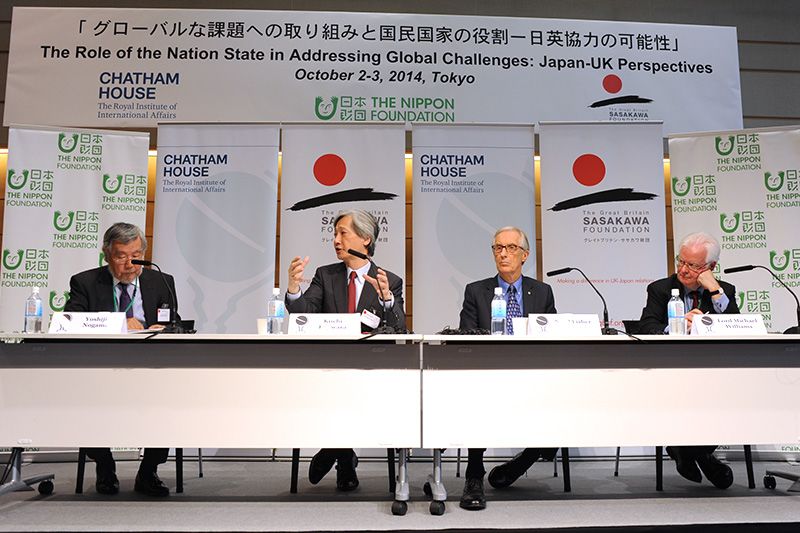 The Office of the UN High Commissioner for Refugees announced in late August that the registered number of Syrian refugees has topped 3 million, with about a half of the Syrian population having been displaced and one in every eight people having fled to nearby countries. Three countries in particular—Lebanon, Jordan, and Turkey—have seen the biggest influx of refugees, totaling 1.14 million, 608,000, and 815,000 people, respectively.

Nigel Fisher, former UN assistant secretary-general and regional humanitarian coordinator for the Syria crisis, warned that of these countries, Lebanon is seeing its very existence threatened by the pressure from refugees, which has brought about competition over resources, giving rise to tension and security issues.

Michael Williams, international trustee of the BBC, noted that Britain, which he said has maintained good relationships with Jordan, might be able to cooperate with Japan in assistance to that country.

Domestic and Energy Issues Under the Microscope

On the disaster at Tokyo Electric Power Co.’s Fukushima Daiichi Nuclear Power Station, Kurokawa Kiyoshi —an academic fellow of the National Graduate Institute for Policy Studies who chaired an independent investigation commission on the accident set up by the Japanese Diet—suggested that Japan and Britain, both densely populated island countries with scarce natural resources, could cooperate in resolving energy issues.

Jeff Kingston, director of Asian studies at Temple University Japan, showed a skeptical view on the restart of nuclear power plants in Japan, pointing out associated risks including the lack of evacuation programs for local residents. This discussion was also joined by Lutz Mez, professor of political science at the Freie Universität Berlin.

This year’s seminar closed on an energetic note, with many participants already proposing themes to be taken up at the 2015 gathering, to be held once again in Britain.