The administration of Prime Minister Abe Shinzō was hit by the resignations of two high-profile women ministers on October 20. On Monday morning, Obuchi Yūko offered her resignation as minister of economy, trade, and industry in connection with accusations of improper use of funds from her political support groups and campaign donors. That afternoon Matsushima Midori, minister of justice, stepped down over the distribution of paper fans bearing her likeness to voters.

For Prime Minister Abe, who just last month launched his reshuffled cabinet around the centerpiece of five female members—an all-time record for Japan, and the symbol of his drive to make the government one “in which women can shine”—the day’s resignations were perhaps the most serious blow his administration has received since its formation in December 2012.

At a press conference the same day, Abe stated: “As prime minister, I bear full responsibility for having appointed them, and I apologize deeply to the people of Japan.”

The two women’s resignations are the first to impact Abe’s second administration. His first outing as premier, in 2006–7, was marred by several high-profile resignations and one suicide in connection with accusations of malfeasance. All eyes are now on the Kantei to see how it will hold up after today’s events.

Money at the Heart of the Scandals

Behind Obuchi’s resignation are media reports of misuse of political funds by her support groups. Potential improprieties came to light after the weekly magazine Shūkan Shinchō reported on the content of financial statements filed by these groups, which included items like “ticket costs” and “meal costs” for Obuchi supporters who attended theater events in Tokyo in 2010 and 2011. By picking up the tab for costs that should have been covered by the guests themselves, the support groups appeared to be in violation of election law, which bans any such benefits provided to voters.

Matsushima, meanwhile, distributed paper fans bearing her name and likeness and a list of her policies at events in her Tokyo constituency. The opposition Democratic Party of Japan has been pursuing this as a potentially illegal act (politicians are not allowed to present items of value to voters), and last week escalated the matter by filing a criminal complaint against the justice minister with the Tokyo District Court, accusing her of violating the Public Offices Election Act. 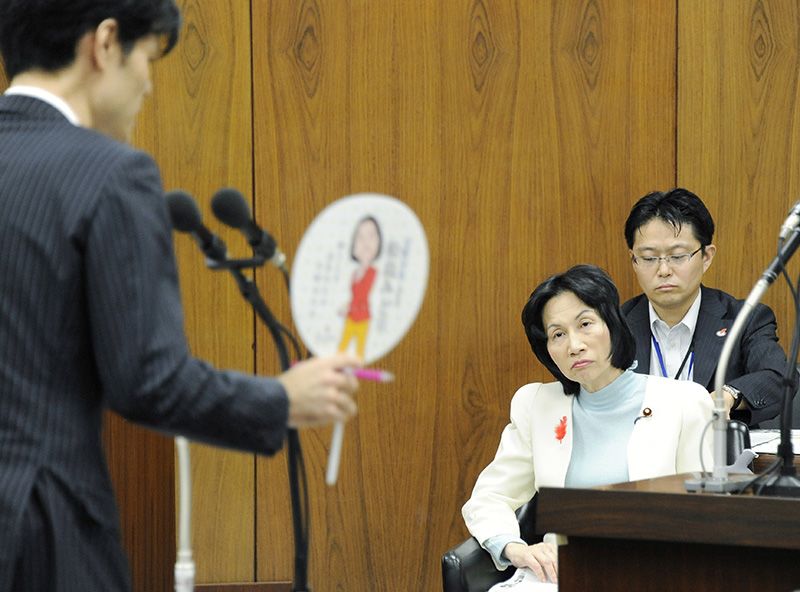 Justice Minister Matsushima faces questioning on the paper fans in a House of Representatives Committee on Judicial Affairs meeting on October 15. (© Jiji)

Obuchi, a 40-year-old mother of two, is the daughter of Obuchi Keizō (prime minister 1998–2000), whose Gunma Prefecture Diet seat she took over after he was felled by a stroke. She has won reelection four times since then and has served in the cabinet twice—once as METI head, and before that, as minister of state for social affairs and gender equality under Prime Minister Asō Tarō (2008–9). Her pedigree and success had marked her as a possible future prime minister, but this resignation, under a cloud of scandal, will set that goal back considerably.

Also set back has been Abe’s entire administration. By tapping five female ministers, he sent a signal that Japan intended to make the most of its women in the political and economic spheres. Obuchi, as a woman who was successfully building a career while balancing it with motherhood, was one of the key figures in this respect.

In addition to her METI portfolio, Obuchi was also state minister overseeing the Nuclear Damage Compensation and Decommissioning Facilitation Corporation, a role in which she was tasked in part with persuading the public to accept restarts of Japan’s nuclear reactors. And as economy minister, she was deeply involved in crafting support measures for small and medium-sized enterprises, expected to contribute to regional economic revitalization—another main plank of Abe’s. Her resignation will set back the policy calendar in all these areas.

Matsushima is a former Asahi Shimbun journalist with four election wins under her belt. The justice portfolio, her first cabinet position, ended up being hers for less than two months. Abe’s second administration lasted for 617 days without a membership change, a postwar record. But just weeks after he reshuffled the cabinet, its future looks much rockier.