Exporting the Maglev Dream: Can the Bullet Train Go Global?

But Japan’s high-speed railway ambitions do not end there. JR Central and its boosters in the government are already lobbying for construction of a similar maglev line through the Northeast Corridor between Boston and Washington DC in the United States.

JR Central plans to complete work on the Tokyo–Nagoya section by 2027, at a cost of about ¥5.5 trillion (roughly $45 billion–$50 billion)—all of it borne by the corporation. The line will tunnel through the Southern Alps to connect Shinagawa Station in Tokyo with Nagoya Station, a distance of 286 kilometers, in as little as 40 minutes. That’s less than half the time it takes via the Tōkaidō Shinkansen (88 minutes), which runs along the Pacific coast. The next phase of the project will extend the line to Osaka by 2045, bringing total estimated construction costs to ¥9 trillion. When complete, the Chūō Shinkansen is expected to cover the 438 km between Tokyo and Osaka in just 67 minutes.

The key to this unprecedented speed is the use of linear motor magnetic levitation technology. Conventional railways rely on friction between the train wheels and the track to create the traction needed to propel the train forward. But JR-Maglev trains will float some 10 centimeters above the track, suspended and propelled by superconducting magnets built into the train and superconducting coils mounted along the track. This unique made-in-Japan technology will allow trains to travel at speeds of up to 500 km per hour. 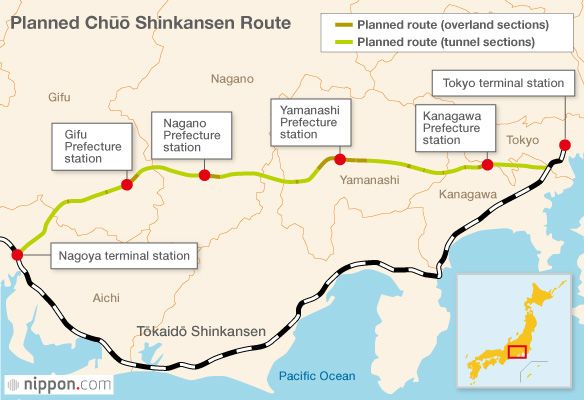 What possessed JR Central to launch such an ambitious undertaking? “We made the decision to develop the maglev because the Tōkaidō Shinkansen had reached the limit of its carrying capacity and because we saw the need for an alternative route in the event that an earthquake or other disaster caused major stoppages along the Tōkaidō Shinkansen,” says Representative Director and Chairman Emeritus Kasai Yoshiyuki. 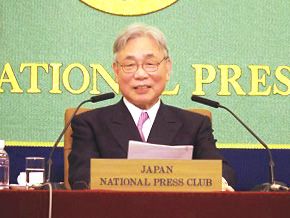 Still, the Chūō Shinkansen seems an extravagantly expensive project for a single company to finance. JR Central finds itself in a position to do so partly because the Shinkansen has operated in the black for half a century—ever since it opened for service in 1964. Another important factor was the zero-interest financing the company was able to secure after the collapse of the 1980s’ asset bubble.

Kasai is confident that the line, once built, will pay for itself. “If we can charge passengers just ¥700 more than our Tōkaidō Shinkansen fares, we should have no problem making it a going concern,” he asserts. Yet there is no denying that a project on this scale poses a substantial risk—especially in this age of uncertainty, when the specter of disaster lurks just over the horizon. One can only admire the company’s determination and spirit.

In 1825 the British steam engine Locomotion inaugurated the age of rail transport when it carried 600 passengers 19 km down a public line in northeastern England. (The trip took about two hours.) Almost two centuries later, that legacy lives on in Europe’s modern rail system. Even today, new lines are planned and built basically as extensions of the original network laid in the nineteenth century.

But Japan’s Shinkansen system, now 50 years old, was built exclusively for high-speed passenger trains. Neither freight trains nor local trains are permitted on its tracks. The use of dedicated railway lines built without road crossings at grade, combined with an automated train control system that eliminates the danger of collisions, has allowed Japan to develop a system of safe high-speed rail transport unique in the world.

Now Japan has taken another giant step forward with the commercialization of its own linear maglev Shinkansen technology.

The technology’s backers are not just gambling on the success of the Chūō Shinkansen. They are also betting that Japanese-style advanced high-speed rail transport is exportable. “Many countries that are thinking of building new railways would do well to adopt a brand-new system from the start,” says Kasai. In April 2014 four companies of the JR group jointly established the International High-Speed Rail Association (Shukuri Masafumi, chair), which is dedicated to exporting Japanese-style high-speed rail systems to such countries.

A key focus of the export campaign will be the highest volume passenger-train route in the United States: the Northeast Corridor, which runs 730 km along the northeastern seaboard, from Boston through New York City, Philadelphia, and Baltimore to Washington DC. Most of the Northeast Corridor is owned by Amtrak, which operates America’s only high-speed rail service, the Acela Express, between Boston and Washington DC.

Like other densely developed urban corridors, the northeastern seaboard suffers from chronic highway congestion, and it has all the air traffic its airports can accommodate. Building another expressway or another airport would entail excessive costs without necessarily solving the basic problem. The region is like a heart patient whose coronary arteries are blocked, compromising circulation throughout the body.

As Kasai sees it, the answer to the problem is a Japanese-style high-speed railway. “From the US viewpoint, a railway that bypasses the existing infrastructure of this highly developed urban area would be a very user-friendly solution that significantly enhances the region’s infrastructure,” he says. “From our standpoint, the Northeast Corridor has great appeal on account of its concentration of high-time-value customers.” The administration of President Barack Obama has embraced the idea of high-speed rail, and Japan is keen to export its linear maglev system to the Northeast Corridor, with its high potential for profitable public transportation.

A Bullet Train for Texas

JR Central, meanwhile, is working with the privately funded Texas Central Railway to export its tried and true Tōkaidō Shinkansen technology to the state of Texas. If the project pans out, an international version of the Nozomi bullet train, the N700-I Bullet, will eventually speed between the cities of Dallas and Houston, a distance of about 360 km. With a combined population of several million and no major existing railways to speak of, the region lends itself to a Shinkansen system. Talks with TCR are making good progress, and construction “could be underway sooner than you think,” according to Kasai.

The campaign to export advanced high-speed rail technology has the blessing of Prime Minister Abe Shinzō, who has incorporated it into his administration’s economic growth strategy. At a bilateral summit meeting with President Obama in April 2014, Abe took on the role of salesman-in-chief, holding out the incentive of a free technology transfer and several billion dollars to cover construction costs for the 66-km Washington–Baltimore leg of the envisioned Northeast Corridor high-speed line.

Still, US government finances are tight, and with the Republican Party in control of Congress since last November’s midterm elections, it is questionable whether President Obama can marshal support and secure funding for such an expensive project.

A substantial number of countries have drawn up plans for new high-speed rail systems, including Australia, Malaysia, and India. Unfortunately Japan’s efforts to export the Shinkansen have yielded few results to date. So far its only customer is Taiwan, where a high-speed rail service began in 2007. In Thailand and Vietnam, high-speed plans have been put on hold.

At present, China’s 30-km Shanghai Transrapid (Shanghai Pudong International Airport–Longyang Road Station) is the only commercially operated maglev line in the world. Germany provided the technology for that project, but its own maglev program closed down in 2011 after a fatal accident at a test facility in 2006. JR Central could have trouble persuading other countries to invest in a Japanese-style maglev, especially given the company’s lack of experience operating such a line commercially.

Kasai remains optimistic. “Of course, selling a high-speed rail system isn’t as simple as just giving a sales pitch,” he says. “But the United States needs such a system, and we have the know-how. Japan and the United States are economic allies as well as security allies. Given that special relationship, this is something that has to happen, and eventually, I’m convinced that it will.”

Such faith and tenacity may not be sufficient to turn Japan’s maglev dreams into a global enterprise, but surely they are a basic prerequisite.