This spring an international event devoted to state-of-the-art maritime defense technologies and equipment was held for the first time in Japan. MAST (Marine Systems and Technology) Asia 2015, a three-day conference and exhibition in the port city of Yokohama, drew nearly 4,000 participants, of whom about 1,300 attended conference sessions, according to a preliminary estimate by MAST Communications, the British company that organized the event. 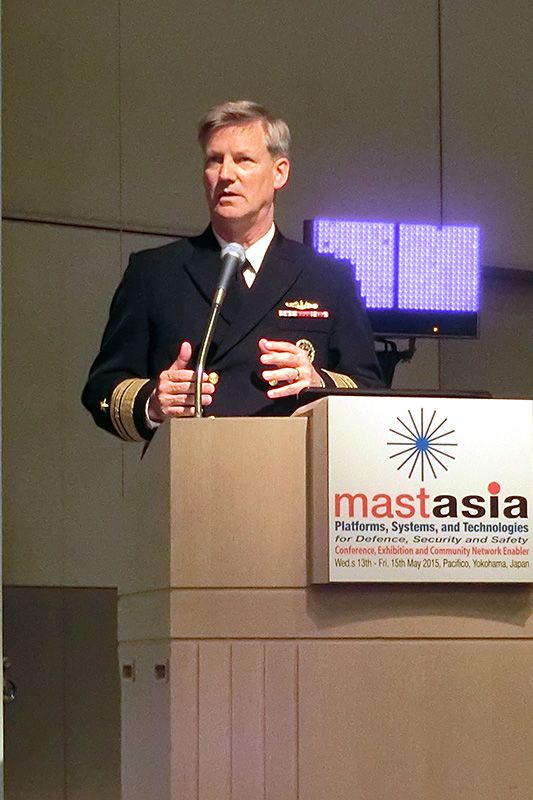 Former Japanese Defense Minister Morimoto Satoshi, serving as chairman of MAST Asia 2015, opened the event on May 13 with an address noting the importance of securing marine resources and maritime trade. In an allusion to China’s recent reclamation work on several disputed atolls in the South China Sea and attempts to challenge Japan’s sovereignty over the Senkaku Islands in the East China Sea, Morimoto quoted from the Declaration on Marine Security issued by the Group of Seven foreign ministers on April 15: “We are concerned by any unilateral actions, such as large-scale land reclamation, which change the status quo and increase tensions. We strongly oppose any attempt to assert territorial or maritime claims through the use of intimidation, coercion, or force.”

Top-brass officers from Japan, the United States, Britain, and France, including Admiral Takei Tomohisa, the Maritime Self-Defense Force’s chief of staff, and Vice Admiral Robert L. Thomas, commander of the US Seventh Fleet, delivered keynote speeches focusing on the military situation in the Asia-Pacific region. These were followed by the opening of the exhibition and a program of break-out sessions on specific subjects in the surface, undersea, and air and space sectors.

Among the some 100 exhibitors at MAST Asia were all 13 of Japan’s major defense contractors. These included ShinMaywa Industries, which introduced the US-2, an amphibious aircraft capable of touching down on rough seas with waves of up to three meters. The four-engine search-and-rescue seaplane is attracting attention from India. It was praised for its reliability by Tharminder Singh, honorary secretary of the Indian Chamber of Commerce in Japan, who said the chamber is acting as an intermediary between the Indian government and ShinMaywa regarding a possible deal.

Also on display was a model of the Sōryū-class submarine, a new class of diesel-powered attack submarine, in which Australia is showing strong interest as a replacement for its aging Collins-class boats. Sōryū submarines, with a displacement of 4,200 tons submerged, are built by Mitsubishi Heavy Industries and Kawasaki Heavy Industries for delivery to the MSDF.

At a cabinet meeting in April 2014, the administration of Prime Minister Abe Shinzō  eased Japan’s weapons export policy with the adoption of the Three Principles on Defense Equipment Transfers to replace the Three Principles on Arms Exports. The previous principles, even after their partial relaxation in 2011, had acted as a close to total ban on exports of weaponry and military technology. Sales to Australia or India could be the first concrete deals done under the new principles.

While facing off against Japan over the Senkaku Islands in the East China Sea, China also claims almost 90% of the South China Sea and is rushing reclamation work on several atolls in the sea that are also claimed by the Philippines and other neighboring countries.

The United States and its treaty ally, the Philippines, recently conducted a large-scale military exercise in the area in response to the growing Chinese presence. This was followed by the first-ever joint naval exercises by Japan and the Philippines in May. The training, which involved two MSDF destroyers and one Philippine frigate, took place in waters off Subic Bay, which used to host a US naval base.

Also in May, the Abe administration submitted new national security legislation to the Diet that would significantly increase the scope of potential activities by the Self-Defense Forces. Omitting previous references to “areas surrounding Japan,” the new legal framework places no geographical limits on activities by the SDF in response to situations that could have “grave consequences” for the nation’s peace and security.

In a related move, Japan and the United States agreed in April on a revised set of Guidelines for Japan-US Defense Cooperation, which “update the roles and missions of the two countries and promote a more balanced and effective Alliance to meet the emerging security challenges of the twenty-first century,” according to a joint statement issued by the foreign and defense ministers of the two countries. The document also states that ”the new Guidelines enable the Alliance to make greater contributions to international security initiatives wherever appropriate in a way consistent with Japanese laws and regulations, such as peacekeeping operations, maritime security, and logistic support.”

Under these new guidelines, Japan may find itself called upon to provide logistic or other support for US forces in the event of contingencies like the outbreak of a military clash involving China and its neighbors.

(Originally written in Japanese by Sugimoto Hitoshi of Nippon.com and published on May 14, 2015. Banner photo: Exhibition booth for the US-2 amphibious plane at MAST Asia 2015.)