The Promise of Cellulose Nanofibers

Cellulose, the main ingredient of plant fibers, is drawing attention as a promising new material that is light, strong, and eco-friendly when processed into celluose nanofibers. CNFs have many potential applications, such as in adult diapers, electronic displays, automobiles, and airplanes. With forests covering about 70% of its territory, Japan is a world leader in CNF-related research and development. Competition in developing CNF applications is now unfolding with the forest-rich nations of Northern Europe and North America.

One-Fifth the Weight of Steel and Five Times Its Strength

Interest in CNFs is based on their light weight and strength, said to be one-fifth the weight of steel and five times its strength. Light and strong automotive parts can be made by mixing CNFs with plastic or rubber. A group headed by Professor Yano Hiroyuki at the Research Institute for Sustainable Humanosphere, Kyoto University, is researching the replacement of iron with CNFs in automobile bodies and hoods, making automobiles lighter and more fuel efficient. This will also lower carbon dioxide emissions. In the future, CNFs may be incorporated in aircraft bodies similar to carbon fiber. 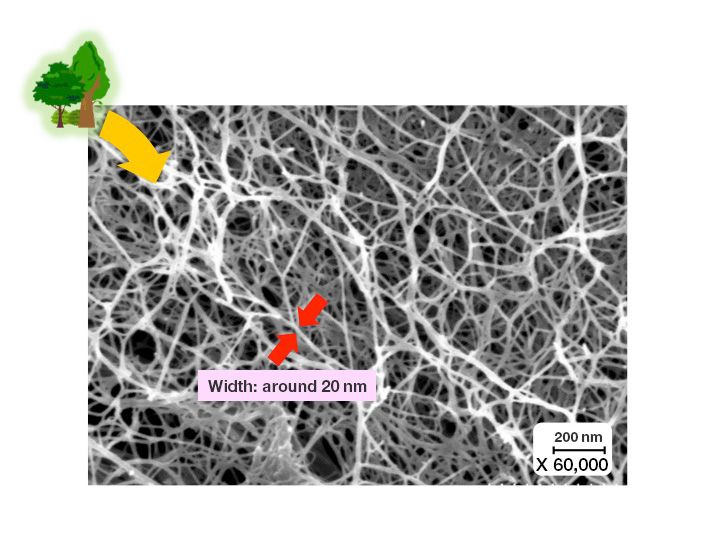 A view of CNFs through a microscope (courtesy of Nanocelluose Forum).

CNFs can also be used to make glass that is strong and resists heat deformation. Since the fibers are on a nano scale (one billionth of a meter), they allow visible light to pass through and can be processed into optically transparent materials. With a large specific surface area (surface area per unit of mass), CNFs can be made into filters that collect minute dust particles or into deodorants that absorb microscopic odorous substances. The freshness of food products can be maintained with packaging materials using CNF film as a deoxidizing agent. CNFs are highly viscous in water and may be used as an additive contributing a chewy quality to food.

Cellulose can be extracted from nearly all plants, such as trees (lumber), straw (wheat and rice), and stalks (corn and cotton), and this wide availability means that its environmental burden is low.

A Leader in Basic Research

Japan is achieving significant results in the basic research of CNFs. Paper companies routinely extract cellulose from wood materials to produce pulp. The bonds between nanofibers in pulp, however, are extremely strong, and a huge amount of energy is needed to split these bonds uniformly. This has been the greatest barrier to the commercialization of CNFs. 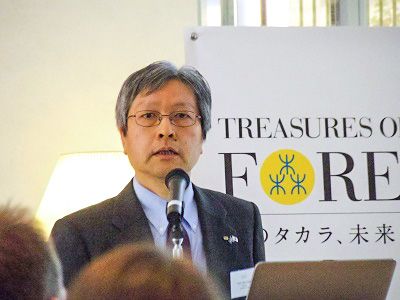 Professor Isogai of the University of Tokyo at the Embassy of Sweden, Tokyo, on March 10, 2016 (photo by Nagasawa Takaaki).

A research group led by Professor Isogai Akira of the University of Tokyo’s Graduate School of Agricultural and Life Sciences discovered in 2006 that the catalyst TEMPO used in oxidizing materials promotes the natural unraveling of fibers and enables the efficient extraction of CNFs. Through this chemical process, the electricity needed to produce nanofibers can be reduced 60- to 300-fold.

Professor Isogai was recognized for this discovery with the Anselme Payen Award of the American Chemical Society in March 2015, a prize named for the French chemist who discovered cellulose. Isogai also became the first person in Asia to win the Marcus Wallenberg Prize of Sweden, known as the Nobel Prize for forestry, in September 2015. 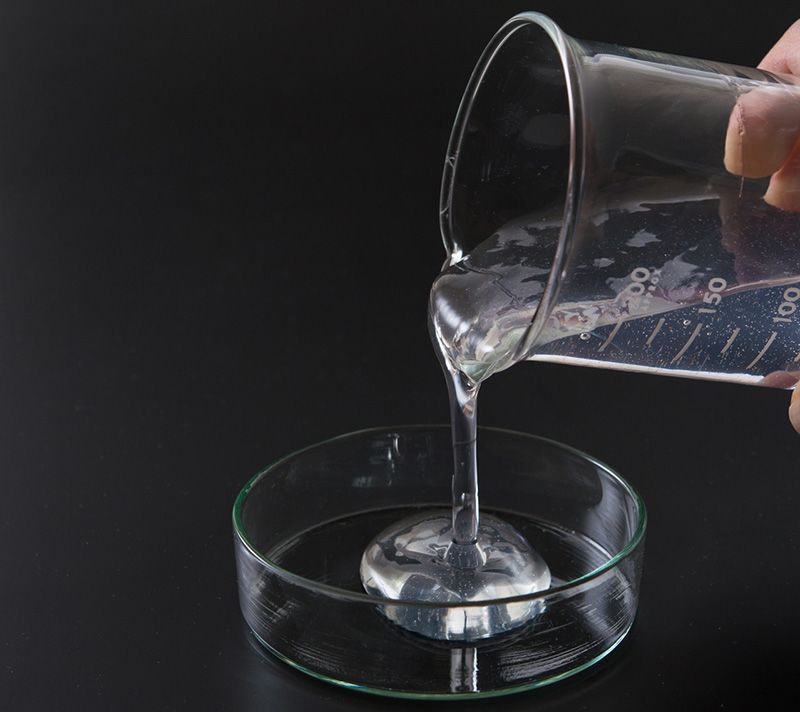 Faced with shrinking demand for paper, paper manufacturers are actively engaged in the R&D and commercialization of CNFs. Nippon Paper, Japan’s second largest paper company, began operating a production demonstration facility (annual production of more than 30 tons) using the TEMPO catalyst oxidation process at its Iwakuni plant in October 2013. The company is also working on CNF applications. It succeeded in developing a CNF sheet with deoderant and antibacterial properties and began selling the world’s first adult diaper utilizing CNFs in October 2015.

Ōji Holdings, Japan’s largest paper company, developed a continuous process for manufacturing transparent sheets out of 4-nanometer CNFs in March 2013 with Mitsubishi Chemical. The sheets are lightweight and fold like paper, and they can be made into large electronic displays or solar cells that are unfolded when needed. Focusing on CNFs’ property of viscosity, Ōji Holdings is also working with Nikkō Chemicals on developing new uses and functions for CNFs as a raw material for cosmetics. 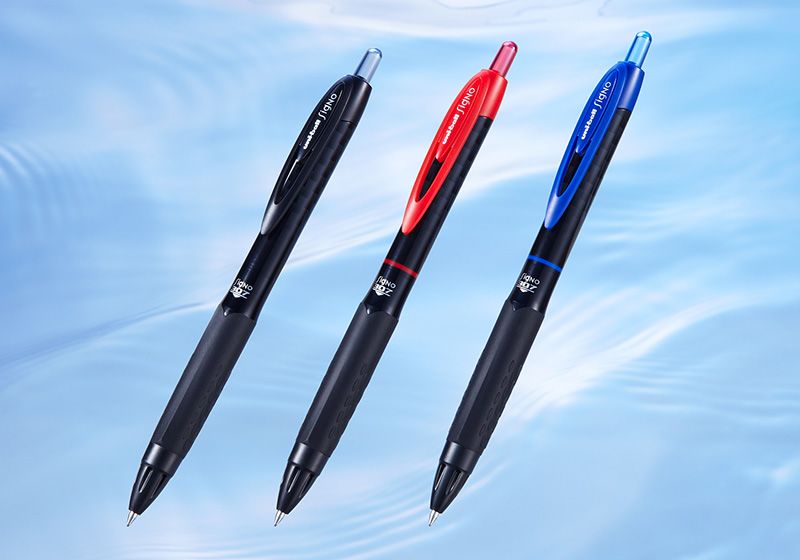 Mitsubishi Pencil will begin domestic sales of gel ink ballpoint pens using CNFs as a thickening agent in late May, a product it already launched in European and US markets in 2015. The ink in these pens is 50% less viscous than conventional ballpoint pens, and writing remains skip free even when scribbling quickly.

According to Professor Yano of Kyoto University, while it will be some time before the entire body is made from CNFs, automobiles can be expected to include plastic parts reinforced with CNFs in the not too distant future.

Lines drawn with a conventional pen, left, and with Uni-Ball Signo 307, right (courtesy of Mitsubishi Pencil).

While CNFs are expected to find a wide range of uses, their high manufacturing cost remains a bottleneck. A cost of ¥5,000 to ¥10,000 per kilogram for CNFs compares to ¥200 for steel and ¥300 to ¥500 for plastic. Even when mixed with plastic, the per kilogram cost of CNFs is greater than the ¥3,000 for carbon fiber or ¥5,000 for aramid fiber. A factor in favor of CNFs, however, is the extremely low market price of pulp, its raw material, which is between ¥60 and ¥80. Tapping this cost advantage may enable the rapid commercialization of CNFs.

Northern Europe and North America have taken the lead in setting up demonstration plants. The Innventia Group, a research institute in paper manufacturing, is playing a central role in Sweden in researching the commercialization of CNFs in coordination with a subsidiary company. The group began operating the world’s first pilot plant for manufacturing CNFs (daily production of 100 kg) in February 2011.

Canada is working on the application and commercialization of cellulose nanocrystals, which are even smaller than CNFs, through joint research and development involving industry, government, and academia. The joint venture CelluForce began operating the world’s first CNC demonstration plant (daily production of 1 ton) in January 2012. In the United States, the Forest Service of the Agriculture Department established a CNC pilot plant (weekly production of 30 kg) in July 2012.

The government’s Japan Revitalization Strategy 2015 specifies the development of international standards for CNFs and the promotion of their use. To ensure widespread involvement in this process, a Nanocellulose Forum (chaired by Kyoto University’s Yano Hiroyuki) was established under the National Institute of Advanced Industrial Science and Technology with the objective of reducing the cost of manufacturing CNFs to ¥300 and to develop CNFs into a ¥1 trillion market by 2030.

Watanabe Masayoshi, head of the Paper Industry and Consumer and Recreational Goods Division of the Ministry of Economy, Trade, and Industry, points out that costs will fall sharply if mass production can be achieved, opening the way to manufacturing utilizing domestic forest resources. He hopes that Japan can take the initiative through standardization.

Trees that were planted in Japan after World War II are reaching the harvest stage. Utilizing these ample forest resources to manufacture CNFs offers Japan the opportunity of transitioning to an economy powered by a new biomass industry.

Originally written in Japanese and published on May 13, 2016. Banner photo: CNFs shown through a microscope (left, courtesy of the Research Institute for Sustainable Humanosphere, Kyoto University) and CNF dispersion fluid in a beaker produced by Nippon Paper’s production demonstration facility (courtesy of Nippon Paper).