Researchers at the International Institute for Integrative Sleep Medicine of the University of Tsukuba have identified two genes directly involved in regulating sleep and wakefulness. The IIIS team published the breakthrough discoveries in the electronic edition of the British scientific journal Nature in November 2016.

The mechanics of sleep is one of neuroscience’s greatest mysteries. Why do all animals, including humans, need to sleep, and how do they maintain a regular sleep cycle? The team’s findings throw light on questions that have puzzled scientists for centuries.

“Genes that were directly linked to sleep had never been found before,” explains IIIS Director Yanagisawa Masashi, “so the recent findings are major discoveries that will help us fathom what somnolence is all about. They could eventually be applied in treating sleep disorders and other conditions.”

Sleep has long remained something of an enigma to conventional science, which relies on the sort of observation and experiments that cannot be done when the subject is, by definition, unconscious. The team led by Yanagisawa thus employed an ambitious and unconventional approach to plumbing the secrets of sleep, relying instead on forward genetics—searching for the genes responsible for certain hereditary traits, or phenotypes.

The first step was to create mice with a variety of artificially induced genetic mutations in the neurons. The sperm DNA of male mice was randomly damaged by injecting a mutagen called N-ethyl-N-nitrosourea. The mice were then propagated, and researchers checked for abnormalities in the sleep and waking behavior of the offspring by measuring the electrical activity of the brain and muscles. The next generation was produced from individuals showing clear signs of abnormal sleep patterns, such as extremely long or short sleep. If the same abnormalities were seen in the offspring, the traits were determined to have been inherited; researchers then set out to identify the genes shared by mice of the same lineage.

Yanagisawa and his team, including Professor Funato Hiromasa, bred more than 8,000 mice over the course of roughly six years and meticulously searched for the presence of sleep abnormalities. This approach was both labor and time intensive, as well as costly, but it paid off in the end. 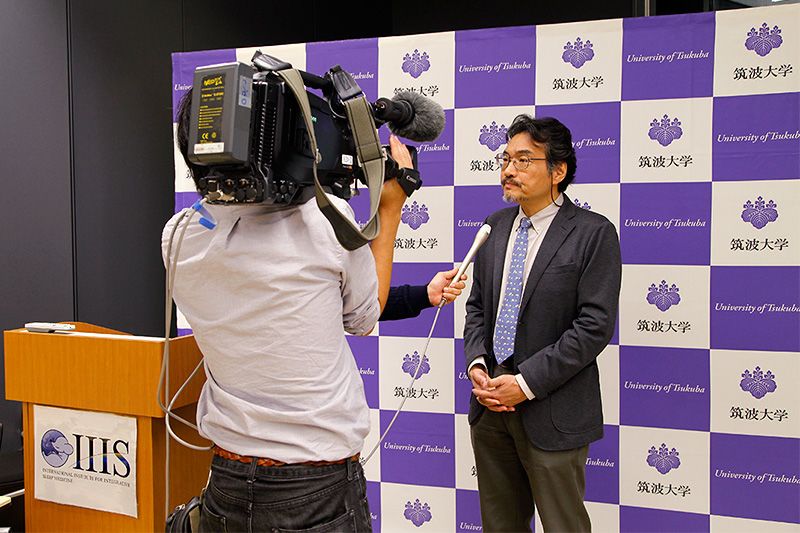 Professor Yanagisawa is interviewed by a broadcaster about the findings (photo courtesy of WPI-IIIS).

The team identified two lineages: one with significantly reduced waking hours and another with significantly low levels of rapid eye movement during sleep. From among the over 1,000 mutations that had occurred in the genomes of second-generation mice, the scientists made a short list of genes closely associated with each phenotype. They then reproduced mice with the same genetic mutation by implanting the identified genes using state-of-the-art genome editing. By verifying whether or not these mice exhibited the phenotype of shorter waking hours or reduced REM sleep, they were able to demonstrate the causality between the gene and phenotype.

The upshot was the discovery of two genes: Sik3 and Nalcn.

Mice with a mutated Sik3 gene had no anomalies in the brain’s arousal system but slept for abnormally long durations and stayed awake for extremely short periods. Genes directly involved in modulating the quantity and quality of sleep had never been found before. The team believes that Sik3, a protein-phosphorylating enzyme, generates the signals for drowsiness. Moreover, it has ascertained that Sik3 also regulates sleep in fruit flies and roundworms, suggesting that the gene is universally involved in sleep regulation.

Meanwhile, REM sleep was dramatically reduced among mice with mutations in the Nalcn gene. The sleep cycle alternates between REM sleep, in which the body is essentially asleep but the brain is active, and the deeper non-REM sleep. Nalcn may be responsible for producing proteins involved in switching between the two states of sleep, and its discovery is expected to shed light on the intracellular mechanism of sleep state switching. 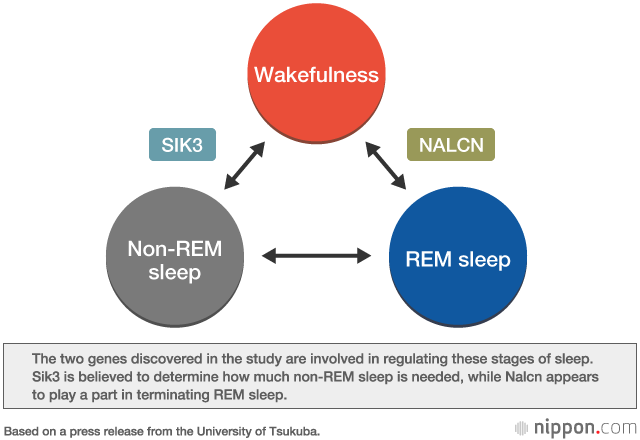 In 1998 Yanagisawa discovered orexin, a substance that controls the switching between sleep and wakefulness by promoting the latter. In addition to uncovering the genes associated with sleep, the other pillar of current research at IIIS is developing a drug that treats narcolepsy by activating the effect of orexin. The institute has already found the protein that acts as a receptor for orexin, and it hopes that a drug with this protein will be able to treat the symptom.

To that end, the IIIS brought on board Professor Nagase Hiroshi, a synthetic chemist who has developed two drugs at pharmaceutical companies. With his help, it has succeeded in synthesizing YNT-185—a highly soluble compound that shows significant activity even at low concentrations (around 10-9mol/L)—as an orexin receptor agonist. The results were published in 2015, revealing the compound’s structure, and many pharmaceutical firms have jumped on the bandwagon to optimize its structure with an eye to developing medication.

But Yanagisawa is intent on staying ahead of the game. “We’d like to pin down a candidate substance within two years and be the first to develop a drug based on it,” he says.

(Originally written in Japanese and published on January 3, 2017. Banner photo: A large-scale system capable of simultaneously monitoring the brain and muscle activities of numerous mice. Photo courtesy of WPI-IIIS.)