Revision of the Three Principles on Arms Exports, Assistance for Myanmar

At a meeting on April 10 between Prime Minister Noda Yoshihiko and his visiting British counterpart, David Cameron, the two leaders agreed that Japan and Britain would work on joint development of defense equipment. The agreement was grounded in a policy change announced December 27, 2011 concerning a revision of the Three Principles on Arms Exports, which had previously precluded such joint undertakings.

Greater Flexibility in Applying the Three Principles on Arms Exports

The Three Principles on Arms Exports have a long history, dating back to a statement made by Prime Minister Satō Eisaku in response to questioning in the House of Representatives in 1967. Satō set forth a policy of banning arms exports to (1) communist bloc countries, (2) countries subject to an arms export embargo under United Nations Security Council resolutions, and (3) countries involved or likely to become involved in international conflicts. This original formulation of the Three Principles was not particularly problematic. But a 1976 statement to the lower house by Prime Minister Miki Takeo declared that Japan would refrain from exports of arms even to areas other than those set forth in the Three Principles and would apply the same sort of restraint to exports of equipment used in arms manufacturing. With these additions, the government’s policy became an effective ban on all exports of arms, defense equipment, and the like.

The revision approved by the government last December was broader in scope, providing exceptions that covered not just specific cases but general categories. The newly adopted guidelines for the overseas transfer of defense equipment allow (1) the transfer of defense equipment overseas in cases involving contributions to peace and international cooperation and (2) international joint development and production of defense equipment in cases where Japan has a cooperative relationship in the field of security with the other country or countries and where joint development and production will contribute to Japan’s own security. In recent years, security has become a greater concern in the area around Japan; meanwhile Japan’s defense budget has been stagnant for a long time, and the cost of procuring the most advanced equipment, such as next generation fighter jets, has risen even higher.

The decision to finally revise the Three Principles and allow joint development and production of defense equipment with security partners other than the United States is a matter of great significance for the maintenance and enhancement of Japan’s defense industry. I hope the government will implement the revised principles as flexibly as possible.

The Fourth Mekong-Japan Summit was held in Tokyo on April 21. At this gathering Prime Minister Noda announced Japan’s intention of providing some ¥600 billion in official development assistance over the coming three years for infrastructure projects in the countries of the Mekong region, namely, Cambodia, Laos, Myanmar (Burma), Thailand, and Vietnam. Assistance will be provided for 57 projects, including high-speed railway construction, involving ¥2,300 billion in total project costs. 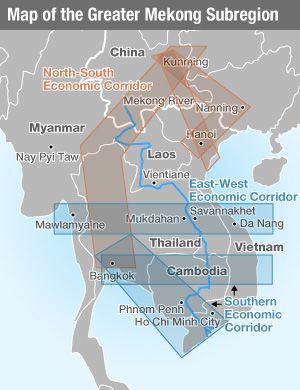 Prior to this summit, Thailand’s Prime Minister Yingluck Shinawatra visited China and met with Wen Jiabao, her Chinese counterpart; the two discussed cooperation in such areas as high-speed rail construction in Thailand and the energy sector, and they agreed to aim for an increase in the value of bilateral trade to $100 billion by 2015, 50% higher than the figure for 2011. Thailand is located at the hub of the so-called Greater Mekong Subregion, and though there has been some political turbulence due to conflict between royalists and the Thaksin camp (supporters of former Prime Minister Thaksin Shinawatra and his sister, the current prime minister), the Thai government has been pursuing a consistent economic strategy aimed at building an internationally competitive mega-region centered on Bangkok. Meanwhile, in line with the master plan drawn up by the Asian Development Bank for market integration and development of “economic corridors” in the Greater Mekong Subregion, China has been building up vertical (north-south) infrastructure links with Kunming (capital of Yunnan Province) as their hub; this work includes development of the ADB’s proposed North-South Economic Corridor, high-speed rail construction, and electric power grid improvement.

Japan, meanwhile, is already implementing economic cooperation for horizontal (east-west) infrastructure in the Mekong region, including development of the proposed East-West Economic Corridor and the Southern Economic Corridor. Thailand is in a position to enjoy the benefits of economic integration in this region through cooperation with China and Japan. Prime Minister Yingluck’s visits to Beijing and Tokyo and requests for Chinese and Japanese pledges of assistance in this connection are quite natural moves from a Thai perspective.

The participants in the Tokyo summit included Myanmar’s President Thein Sein. This was the first visit to Japan by the head of state of Myanmar since 1984.In a meeting with the president, Prime Minister Noda conveyed Japan’s intention of resuming official development assistance (yen loans), which had been suspended since 1987.

Supporting the Reform Process in Myanmar

Over the past year the government of Myanmar has proclaimed its commitment to reforms in pursuit of domestic peace, economic growth, and improvement of living standards. In the legislative by-elections held on April 1 this year, the opposition National League for Democracy scored a major victory. The fact that an opposition victory was even possible is evidence that the administration of President Thein Sein has truly been implementing reforms on the political front. Also on April 1, the government confirmed its reform credentials on the economic front with an overhaul of the exchange rate system. But in the period ahead we can expect to see increased resistance to the reform process.

As noted by Kudō Toshihiro of the Institute of Developing Economies in his recently published book Myanmā seiji no jitsuzō (The Real Picture of Politics in Myanmar), Myanmar’s army greatly strengthened its power base during the years of military rule from 1988 to 2010. President Sein’s reforms are intended to leave this power base in place and legitimize a form of government in which the army will continue to be the backbone of the state. Opposition leader Aung San Suu Kyi has been calling for a revision of the Constitution, which includes provisions giving the military a prominent role in politics, and the recent electoral victory by the NLD-led opposition camp is certain to fuel such demands. But General Min Aung Hlaing, Myanmar’s military commander in chief, insists that the current constitution must be kept in place.

How will this difference be settled? President Sein suggests that deliberations in the national legislature can lead to a compromise acceptable to both the army and the NLD. The outcome remains to be seen, but this issue highlights the importance of providing support for the reform process that the Sein administration is undertaking. If liberalization progresses on both the political and economic fronts, allowing inflows of foreign investment that support economic growth, it will become harder for the authorities to abandon the reforms and turn the clock back. It is good to see the decision by the Japanese government to forgo repayment of some ¥300 billion of Myanmar’s outstanding obligations from the past, and embark on a program of assistance for infrastructure building and human resources development, accompanied by the resumption of concessional ODA lending. If progress can be achieved in the quest for reconciliation with Myanmar’s ethnic minorities, and if trust can be built between the ruling and opposition camps in the legislature, and if the economy can be put on a growth track and living standards improve, the leaders of the government and army should feel more confident in their ability to maintain national stability, and we can expect to see more room for compromise on the constitution.