In Edo (present-day Tokyo) from around the latter half of the seventeenth century, indulging in the pleasures of the city’s “licensed quarters” was one source of entertainment for men, but the cost of hiring the services of a top-class lady was far too exorbitant for the common man to afford. Female residents of the city, for their part, were interested in the theater, but attending a show—although cheaper a visit to the licensed quarters—was beyond the means of many poorer people. A cheaper and more personal alternative to those pastimes that became popular with the general public was the woodblock prints and paintings known as ukiyo-e, which would feature depictions of prostitutes, geisha, and actors. As the popularity of this art form increased, there was more work for artists, with the work split between specialists in engraving and printing. Professional publishers appeared as the business continued to flourish and there was voluminous production of pictures of beautiful women and actors.

From the second half of the eighteenth century to the first half of the nineteenth century, Japan experienced an unprecedented boom in tourism, with common people climbing Mount Fuji, making the pilgrimage to the Ise Shrine, and completing other exploits. These events were reflected in the new genre of landscape prints, including such famous works as Fugaku sanjūrokkei (Thirty-six Views of Mount Fuji) by Katsushika Hokusai (1760–1849) and Tōkaidō gojūsantsugi (Fifty-three Stations of the Tōkaidō) by Utagawa Hiroshige (1797–1858).

Ukiyo-e prints featuring beautiful women and landscapes have been particularly well received abroad, but for those with some knowledge of the history, social customs, and language of Japan, there is a multitude of pictures that are even more interesting.

Today the word manga usually refers to the contemporary Japanese comics, but there is another meaning to the word, which was coined by Hokusai to describe the act of drawing in a carefree way. Epitomizing this style are the Hokusai manga (or Hokusai’s sketches), a 15-volume collection of drawings of various subjects. The pictures in this collection overflow with sophisticated humor in a relaxed but ridiculous style, depicting people and animals in the Edo period (1603–1868) freely moving around in all directions. Although there is no clear story, the satire and irony is very much like the manga of modern times.

In the first half of the nineteenth century, the Edo shogunate forced increased frugality on the people as part of the Tenpō Reforms, banning the illustration of prostitutes, geisha, and actors. Shortly before this, the artist Utagawa Kuniyoshi (1797-1861) was pioneering the new technique of painting prostitutes and actors in the shape of animals and monsters. He also created shadow plays that looked like puzzles and new kinds of animal paintings. The prohibition handed down by the Tokugawa shogunate forced him to be more creative and work even more vigorously in these new fields. As an example, he created a picture where a side profile of a person’s face is composed of naked bodies, and other pictures where cats take the form of letters. 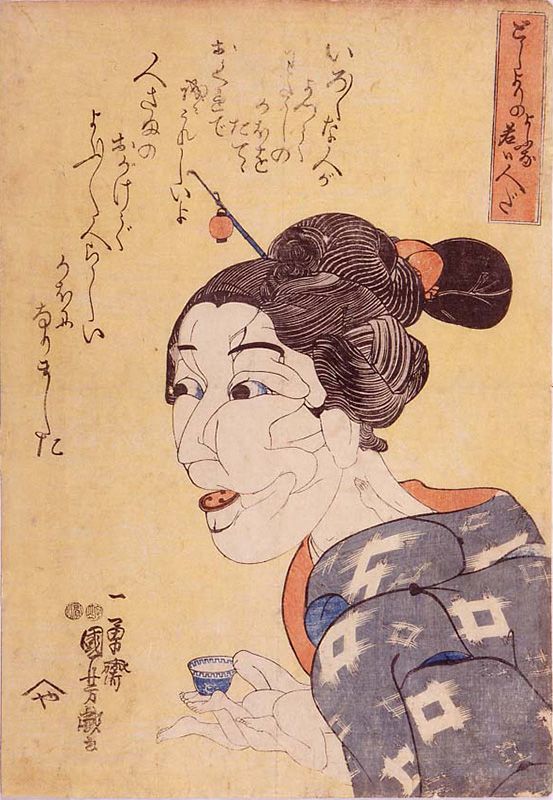 Ukiyo-e pieces travelled to the West in the middle of the nineteenth century. It is well known that the subject matter and composition of Western art were influenced by ukiyo-e but the reverse is also true: ukiyo-e artists got ideas for their work from the West. From the late eighteenth century Japan isolated itself from the outside world, closing its borders to outsiders. Yet ukiyo-e artists still gathered information from Dutch copperplate engravings and other sources, incorporating ancient ruins and European style towns into their artwork. In their artwork, Hiroshige and Hokusai also used copious amounts of the dark blue color used in Berlin ceramics, known as “Prussian blue.”

The “Mass Media” of the Edo Period

It is said that the closer you look at ukiyo-e, the better you will understand what life was like in the Edo period. Each work has the potential to provoke a different reaction. One might wonder, for instance, “What was that play really like? Was that actor any good?” Someone else might think, “I’d love to meet that beautiful woman. Just look at her beautiful kimono!” And still another viewer might be seized by the thought of wanting to climb Mount Fuji some day. Ukiyo-e stimulated people’s desires in much the same way as does our modern-day mass media—from advertisements to newspapers and magazines.

In line with the sophisticated outlook of people in the Edo period, ukiyo-e artists were more interested in vividly designed subjects rooted in daily life, than in accurately portraying the human figure or nature. As a result of that approach, the artists were able to convey to the world a Japanese worldview that differed from the Western outlook.

Photograph supplied courtesy of the Ōta Memorial Museum of Art

Specializing in ukiyo-e artwork, the museum opened in 1980, based on the collection accumulated from inside and outside Japan by the late Ōta Seizō V (1893–1977). Bringing together representative masterpieces from the birth of the ukiyo-e tradition to its height, the museum houses around 12,000 pieces.

Opening hours: 10:30 a.m. to 5:30 p.m. (Last entry at 5:00 p.m.)
Holidays: Every Monday, except when it is a national holiday, in which case the following day is a holiday. Closed for a short period at the end of every month to change the displayed pieces, and at the end of the year (December 21–January 2).
Access: Five minute walk from the Omotesandō exit of Harajuku Station on the JR Yamanote Line; three minute walk from exit number 5 at Meiji-jingūmae Station on the Tokyo Metro Chiyoda and Fukutoshin Lines.