El Sistema is a world-famous music education program. It began in 1975, when the economist and conductor José Antonio Abreu put together an orchestra of Venezuelan musicians in the hope of encouraging more people to participate in the arts in that country. El Sistema is well-known for having produced classical music celebrities like conductor Gustavo Dudamel, but the program is about much more than cultivating professional musicians. With support from the state, the foundation lends instruments free of charge and provides musical education to children and adults alike.

Other activities include programs to tackle poverty and crime, musical instrument restoration workshops for young people, and choirs for disabled children. Nor are the foundation’s goals confined to promoting music alone; by bringing hope to the children’s families and those around them, El Sistema aims to change society for the better. El Sistema has received numerous accolades and awards for its work, including Spain’s prestigious Prince of Asturias Award for the Arts in 2008.

And now El Sistema has arrived in Japan. Established in March 2012, El Sistema Japan has been offering extra-curricular musical activities to local children in the town of Sōma in Fukushima Prefecture, one of the communities devastated by the tsunami of March 2011. There are also plans for a local orchestra. Leading the initiative is Kikugawa Yutaka, whose experience includes work for UNICEF and UNESCO in Lesotho, South Africa, Eritrea, and other areas of Africa. He says that the people of Sōma have a deep affection for their homeland. El Sistema Japan wants to harness that local spirit to build a sustainable framework for support with its roots in the local community. 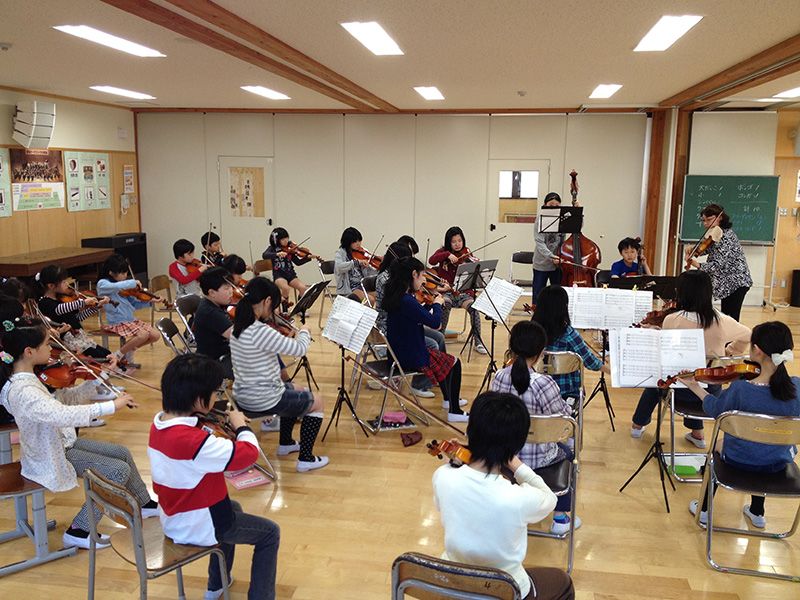 The world-famous cellist, Pablo Casals (1876–1973) believed that taking action was the best way of encouraging others to help. He was convinced that there would always be other people ready to help, just waiting for their opportunity to help those in need. In the early years of the twentieth century he established the Workers’ Society for Concerts in Barcelona, which aimed to make music more accessible to working people. From humble beginnings, the society grew to the stage where ordinary workers, who might have little contact with music otherwise, were forming their own choirs and orchestras. The same spirit of using music to improve society drives El Sistema and its ambitions today. It is not simply a question of encouraging people to attend performances by professional musicians. In Casals’s Barcelona society, the workers were responsible for managing the concerts and many learned to play an instrument themselves. Casals believed that such projects, based on individual initiative, would ultimately benefit society as a whole.

Casals was forced into exile during the Spanish Civil War (1936–39) but continued to perform the music of his Catalan homeland, inspiring and encouraging his fellow Catalonians by confirming their shared identity based on a love for their home. Once the basic essentials of life have been secured, what should we look for next? Our children are the future. They have the ability to influence and draw in other people around them. It would be a mistake to judge El Sistema Japan from a short-term perspective. This is not a situation in which we should look for efficiency and silver-bullet solutions. I intend to take the long view. I will watch with interest to see how El Sistema’s efforts take root in Japan.