Why Noda Decided to Call an Election

On November 16 Prime Minister Noda Yoshihiko dissolved the House of Representatives; a general election will be held on December 16. Many readers may wonder why he took that step at this time. After all, public support for Noda’s cabinet and his Democratic Party of Japan is languishing at a very low level. Opinion polls conducted by the major newspapers shortly before the announcement show that the cabinet support rate had fallen below 20%. And only about 15% of the voters said that they planned to cast votes for the DPJ in the proportional-representation districts of the lower house.

So why did Noda call an election despite the poor political circumstances? The answer can be found in the legislative process surrounding the comprehensive social security and tax system reform bills. In particular, how they passed the House of Councillors is important to understanding why Noda was driven to dissolve the Diet. 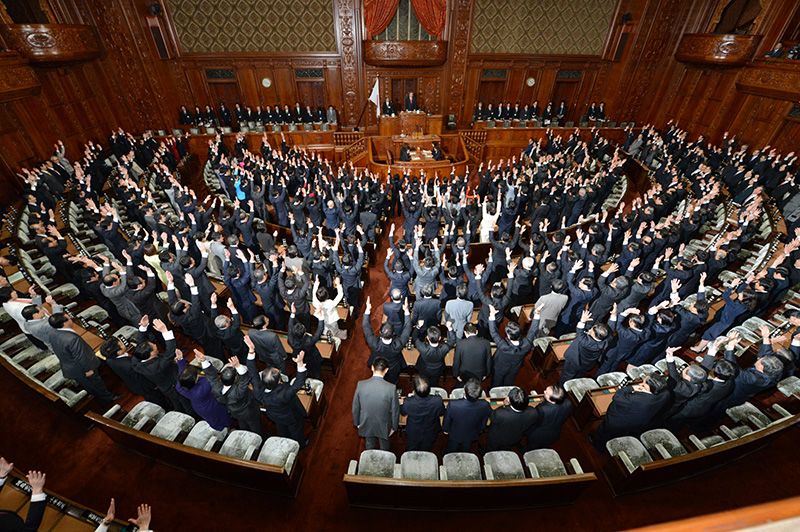 Members of the House of Representatives cheer the dissolution of the lower house on November 16, 2012 (Photo: Sankei Shimbun).

Noda Promises an Election to Get His Bills Passed

It was in March 2012 that the cabinet submitted the social security and tax system reform bills to the Diet. The core of this reform is the raise of the consumption tax rate from 5% to 8%, and later to 10%. Noda considered this legislation to be the most important agenda of his cabinet. Because of the “divided government” (a state in which the ruling coalition does not have a majority in the upper house), he needed the support of the Liberal Democratic Party to get the bills passed. While his DPJ was in command of the lower house, the LDP and its partner, New Kōmeitō, held the key to getting the legislation through the upper house.

The DPJ, the LDP, and Kōmeitō entered into negotiations, eventually arriving at an agreement. The DPJ basically found itself being forced to accept the views of the two other parties on how the reform should be structured. On June 26 the lower house passed the revised legislation, and the bills were sent on to the upper house.

As I have written in some detail about these events elsewhere, here I will simply mention three reasons behind the LDP’s decision to cooperate with the DPJ. First, the LDP itself had previously come out in favor of the consumption tax hike; this was a commitment it made in the campaign for the 2010 House of Councillors election. Second, it hoped that enactment of the legislation would lead to a split in the ranks of the DPJ. Third, it wanted to counter the criticisms of its “indecisive politics.” That is, it feared that further gridlock in the Diet would increase support for the new political forces—particularly the Japan Restoration Party led by Osaka Mayor Hashimoto Tōru.

With the tax-hike bills still requiring approval in the upper house, a number of Liberal Democrats who had not been happy with them from the start stepped up their calls for the prime minister to dissolve the Diet and put the issue before the public. Sympathetic moves became conspicuous in the course of the upper house deliberations, and momentum increased within the LDP to scrap the three-party agreement. The Liberal Democrats planned to submit no-confidence and censure motions against the cabinet in the two chambers of the Diet.

Faced with this critical situation, the prime minister on August 8 held a meeting with then LDP President Tanigaki Sadakazu and Kōmeitō Chief Representative Yamaguchi Natsuo. The upshot was that Noda agreed that once the legislation had been enacted, he would dissolve the lower house “in the near future.” In this way he managed to secure continued cooperation from the LDP and Kōmeitō for a while, and the upper house approved the bills on August 10. As a result, the comprehensive reform of social security and taxes is now ready to go forward as scheduled.

What would have happened if the LDP instead had determined to introduce the no-confidence and censure motions? That would have been the death knell of the three-party agreement, of course, and it would have left the DPJ with no way to get its legislation passed. Noda would have found himself in a very uncomfortable position, and probably he would have felt compelled at that point to dissolve the lower house or have his cabinet resign. In this light, the prime minister really had no choice but to promise the leaders of the opposition that he would soon hold a general election.

Unable to Postpone the Election Any Longer

Subsequently Noda continued to face pressure to follow through on his dissolution promise, but first he wanted to get three political agenda items out of the way. One was enactment of the bill on issuing government bonds. The second was the establishment of a national council to reform the social security system. And the third was enactment of a bill on reforming the electoral system, the key feature of which is a reduction in the number of seats in the House of Representatives to rectify disparity in the value of votes between heavily and sparsely populated constituencies.

On all three items the LDP was willing to cooperate with the prime minister. This cleared the way for Noda to propose on November 14 that the lower house be dissolved in two days, followed by a general election on December 16. The stage he chose for this announcement was the question time in the Diet. Since two of the three agenda items had by then been more or less settled, he asked in return only that the LDP first reaffirm its commitment to the third, the proposed electoral reform.

The prime minister in this way tried to put off the day of dissolution by attaching various conditions that needed to be met before he would act, but eventually he could delay no longer. If he had continued to hesitate, many voters would have sensed he was planning to break his promise, which would have made the political prospects for the Democrats even darker. Political gridlock would also have worsened, because the Liberal Democrats were becoming increasingly less willing to cooperate in legislative deliberations. And when the Diet grinds to a standstill, past experience shows that it is the cabinet and the ruling party that get most of the blame.

In short, Noda’s power to dissolve the Diet at a time of his choosing became subject to constraints back in August, when in the three-party meeting the LDP managed to wrest from him the promise that he would act sometime soon. What had forced him into this position was the fact that his cabinet’s legislation had been taken hostage by the upper house. We may say the dissolution has reconfirmed that the House of Councillors is still a power to be reckoned with. It has sufficient clout these days to hold sway over the prime minister’s dissolution prerogative.