Nuclear Power and the Emptiness of Political Promises

Fukushima: Running Out of Patience

At a New Year’s meeting of her supporters on January 13, Shiga Prefecture’s governor Kada Yukiko revealed the series of events that led to the formation of the Nippon Mirai no Tō, or the “Tomorrow Party of Japan.” Apparently she took the decision to form the party after being persuaded by Ozawa Ichirō in the lead-up to the December’s lower house elections that “if you run, we should get 100 candidates through.” [In fact, the party did not do quite so well. Click here to see full election results.—Ed.] The newly formed Tomorrow Party campaigned on a pledge to phase out nuclear power. Symbolically, Kada and other members of the party leadership gave their first pre-election speeches in Fukushima Prefecture, the site of the 2011 nuclear disaster. 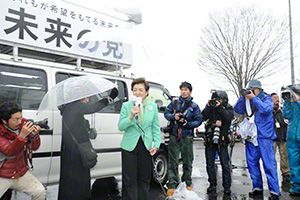 The election was held on December 16, 2012. By the end of the month, serious squabbles were already breaking out inside the party, and the “Tomorrow Party” split apart barely a month after it had been founded. Kada left, and the party was renamed Seikatsu no Tō, or the “Lifestyle Party.” What are we to make of the short-lived party and its pledge to abandon nuclear power? Were Kada and her party simply used to win votes? The sorry saga brought a familiar sense of disappointment.

Last December’s election was the first nationwide vote since the triple disaster of March 2011. For the worst-affected regions in particular, the election represented an important opportunity to choose the government that will be responsible for the recovery and reconstruction efforts in the years to come. One year and nine months on from the disaster, and a full year after Prime Minister Noda Yoshihiko claimed that the situation was “under control,” conditions at the nuclear power plant remain unstable, and more than 150,000 people are still unable to return to their homes.

Work to build adequate interim storage facilities is making little progress, and decontamination efforts have practically come to a standstill, adding to the health concerns of many people in the prefecture. There is also no end to the damage that the disaster continues to wreak on the prefecture’s agriculture and tourism sectors. On a national level, the political response has been limp and ineffectual. The government failed to appreciate the scale of the disaster, and tried to muddle through with regular measures. The people of Fukushima are frustrated and fed up. They are desperate for something that can break through the current impasse and accelerate the recovery and reconstruction process. That, essentially, was the mood in the lead up to the election.

On a national level, there was a good deal of excitement and speculation about the emergence of a so-called “third force” alternative to the two main parties. There was a flurry of activity as new parties formed, joined forces, and fell apart. By contrast, the mood among voters in Fukushima Prefecture was calm and detached from the outset. As soon as the decision was taken to dissolve the Diet and call a general election, the Nippon Mirai no Tō and several other parties rushed to issue campaign promises pledging speedy recovery from the accident. Many promised to review Japan’s nuclear power policy. The details may have varied, but these pledges all had one thing in common: they were lacking in detail, and had nothing concrete to say about how these aims would be achieved. 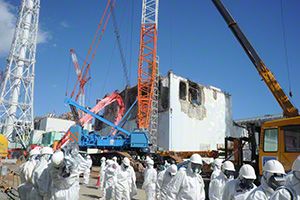 Whether we close down our nuclear power plants or start them running again, the basic problem remains. Without proper facilities for treating and disposing of radioactive waste, we are going to face difficulties sooner or later. Even if a plant is inactive, so long as a large fuel assembly remains in the reactors’ spent fuel pool, the surrounding area remains exposed to the same danger as if the plant were operational. For Fukushima Prefecture, building interim storage and final disposal facilities is the number one priority. Yet none of the parties in the recent election seemed to have the faintest idea about how to provide these facilities.

Fukushima is not the only place in need of new policies to address back-end nuclear issues. This is an urgent question that requires serious thought not only from the other prefectures throughout the country that are home to nuclear reactors, but also Tokyo and other big cities that use most of the electricity they produce. This question ought to be at the center of discussions about nuclear energy. Instead, for all the recent debates about nuclear policy, it has been put to one side, shelved and ignored. People in Fukushima were outraged to see how shallow the political arguments on the subject were. Nuclear power was one of the major points of debate during the campaign, but for many of the most directly affected voters, the impression was of distant politicians with no understanding of the reality. Seen from Fukushima, the political rhetoric looked like idle dream talk.

In the end, it was hard to avoid the conclusion that all the talk about “phasing out” or “moving beyond” nuclear power was just empty rhetoric, designed to win votes—nothing but hot air and make-believe. Certainly this was the impression that many voters got. This was surely the major reason why so many voters lost interest in the election and why only 58.86% of Fukushima voters bothered to cast a vote in the single-seat constituency election—the lowest turnout since the war.

In the event, candidates endorsed by the Liberal Democratic Party were elected in all five of the prefecture’s election districts, once we include those who got in after a second bite at the cherry under the proportional representation system. This result may come as a surprise, given that the LDP were the most noncommittal of all the parties on the question of reviewing nuclear policy. How could a party with such views win the popular vote in a prefecture still reeling from the effects of a nuclear disaster? But of course, the fact that the LDP did relatively well does not amount to a resounding endorsement from the voters. Although the party received a greater percentage of the vote in the prefecture than any other single party, it still failed to secure a majority, winning only 43.6% of the vote. As even the local party leadership had to concede: “This was an election that the Democratic Party of Japan lost. We don’t really feel that we won in any meaningful sense.”

But the DPJ were not the only losers. The results in the proportional representation vote showed support of 26.0% for the LDP, 20.2% for the DPJ, and 17.8% for the Japan Restoration Party. In other words, none of the parties, including those of the so-called “third force,” succeeded in meeting the hopes and expectations of the electorate.

Two Diet members elected from Fukushima districts were included in the cabinet announced shortly after Abe Shinzō took office as prime minister. These were Nemoto Takumi as minister for reconstruction and Mori Masako, who will be responsible for measures to address the declining birthrate. Nemoto will also be responsible for comprehensive policy coordination for revival from the nuclear accident, while Mori will take charge of childcare issues, food safety, and measures to rebuild public faith in the safety of Fukushima and its agricultural produce.

There is some hope in Fukushima that having two of their elected representatives in the national government might lead to some progress in the stalled recovery and reconstruction process. But people are no longer prepared to be forgiving. Quite a few people are adopting a wait-and-see attitude: “Let’s see some results before we get carried away.” During its time in opposition, the LDP was fiercely critical of the DPJ’s handling of the disaster and its aftermath. They savaged the government for its lackadaisical response. Now the boot is on the other foot. Unless the new cabinet manages to bring about rapid improvements in the way the national government and TEPCO are dealing with the recovery process, and makes substantial changes that make a real difference to people’s lives, they will come in for even harsher criticism than the DPJ government they have replaced. Fukushima’s true feelings on the LDP may become known this summer, when the prefecture will vote to elect a single member to the upper house, following reforms that will reduce the number of the prefecture’s representatives.