Abe Shinzō has taken over as prime minister for the second time. The market and the political world have welcomed his arrival and especially his message that, for the time being, vanquishing deflation will be his top priority. As a result, the overvalued yen has undergone some correction, and stock prices have made large gains. While his administration is still working out the details of its policy program, market participants are becoming more optimistic.

To be sure, the improvement of expectations is not a trend confined to Japan. The world economy overall has begun to shift, and this will have an impact on the goals to aim for in the Japanese economy.

Investors Opt for “Risk On” Positions

People in financial circles use a concept called “risk on, risk off.” When investor sentiment tends to favor high-risk, high-return financial instruments, a “risk on” mood is present. In this situation, funds will tend to flow into stocks and property rather than low-risk government bonds, and investments in emerging economies thought to have good growth potential will gain momentum.

Starting in 2007, due to factors such as the subprime mortgage shock, the bankruptcy of Lehman Brothers, and the European fiscal crisis, sentiment among investors was risk off. Funds were moved from emerging markets into safe currencies such as the yen and the dollar. Investors fled from stocks and property and shifted into low-risk Japanese and US government debt.

Accordingly, the yen gained strength, share prices dropped, and government bond yields diminished. A risk-off economic climate is one in which Japan has a hard time, and it is also one reason why deflation has persisted for so long.

Since the second half of 2012, however, a gradual recovery of risk-on optimism seems to have begun around the world. The US economy is showing signs of perking up, although by no means quickly. European economies are still viewed with unease for various reasons, but most observers agree that the worst-case scenarios have been avoided. And in China, where the authorities are under pressure to revise their growth model, the growth slowdown looks like it has stopped.

In this context, signs of a modest resumption of investment in emerging economies can be seen. The Korean won, which is a key currency from Japan’s perspective, has begun to strengthen substantially. The recent tendency for the won to be undervalued has caused serious hardship in Japan’s manufacturing sector. The correction of Japan’s overvalued currency is also moving forward against the dollar and the euro. Moreover, yields on top-grade government bonds, such as those of Japan, Germany, and the United States, seem poised for a gradual upturn now that the Japanese and American stock markets are becoming more bullish.

The Three Arrows of Abenomics

Whether these currents in the world economy will continue remains uncertain, but a great opportunity for Japan, which hopes to reverse the decline in prices as soon as possible, has clearly arrived. The time was right for the new administration to step forward with bold stimulus policies under the banner of a quick escape from deflation.

That said, shrugging off the shackles of persistent deflation will not be easy. This is because the Japanese economy as a whole has become caught in the grips of deflationary thinking. To be sure, Japan does not face a critical balance-sheet problem, setting it apart from the United States, where families have been struggling to get household budgets back into sound shape ever since the global financial crisis hit, and also Europe, where governments still have their hands full dealing with sovereign debt crises. More than 20 years have passed since Japan’s bubble economy collapsed, and both households and companies have an excess of savings, while financial institutions are building up ample stocks of deposited funds. But while Japan is blessed with an abundance of cash, it is cursed with deflation-minded investors. They have been reluctant to take risks and put money to work in the most profitable ways.

Freeing the country from the deflationary trap requires the adoption of an even more aggressive policy of ultraloose money by the Bank of Japan. Such is the thinking of the Abe administration, and the central bank is now poised to raise its inflation target to 2%.

To be sure, monetary easing by itself will be insufficient for bringing deflation to a halt. The economic policy program the administration is assembling is said to consist of “three arrows.” One is bold monetary easing; another is economic stimulus featuring highly focused government spending; and the third is a growth strategy with a number of key components, such as deregulation. The hope is that the economy can be jolted out of deflationary expectations by shooting all three arrows at once. 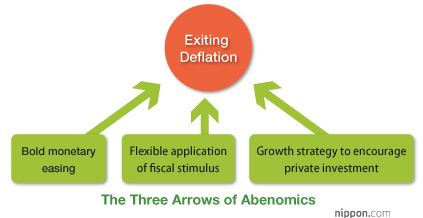 Aiming to Regain Fiscal Health over the Longer Run

From the outset, the Japanese government has needed to avert a collapse in the prices of its government bonds, which could be caused by sloppy management of fiscal policy. After all, Japan’s public debts have grown into a mighty mountain. This means that if the administration implements fiscal stimulus aggressively for the time being, it must at the same time convince the market that it will pilot public finances toward a healthy balance over the longer run. The most important question is what the government will do to suppress the rise of social security expenditures. Also critical is progress toward tax reform through a public debate on securing revenue for fiscal spending.