Although Margaret Thatcher kept a low profile during her final years, as she struggled with Alzheimer’s, media fascination with her life continued to keep her name in the public eye—not least in Japan, where the Iron Lady biopic was a big hit after its release in March 2012. Her death on April 8, 2013, at the age of 87, was a major news story in the Japanese media, more than 20 years after her time as prime minister came to an end.

Nakasone Yasuhiro, the former Japanese prime minister who built a close relationship with Thatcher in the 1980s, remembered her in an article published in the Nikkei the day after her death: “Together with Ronald Reagan, Thatcher will go down in history as the leading Free World politician of the postwar era. She played a leading role in insisting that the free market economies must join together to resist the Soviet Union.” Thatcher, Reagan, and Nakasone were three of the most prominent figures in international politics as the Cold War moved toward its denouement in the 1980s. Thatcher’s death leaves Nakasone as the last of the three still alive.

The Iron Lady Comes to Japan

When Thatcher visited Japan in September 1982, three years after becoming Britain’s first woman prime minister, relations between Britain and Japan were going through an extremely rocky patch. Japan had avoided giving clear support for Britain during the Falklands’ conflict that broke out in April 1982, out of concern that doing so might adversely affect its relations with South America. Thatcher had taken this lack of support as a personal affront. The surge in Japanese exports to Britain was also having a detrimental effect on Britain’s balance of payments and casting a shadow over relations between the two countries. The Japanese prime minister at the time was Suzuki Zenkō—whose lack of political leadership skills was widely recognized within the British government.

The British government put together a secret committee to consider British policy toward Japan. The report, completed in May, noted that Japan “should remain a reliable and co-operative member of the Western family,” suggesting that “Japan should accept greater responsibility for the international consequences of her economic success, and adapt her economic and trading policies accordingly.”

It is notable that the report went beyond merely considering relations with Japan from the perspective of trade frictions. Instead, it argued that a stronger relationship with Japan was necessary from a political and strategic perspective and recognized the need to connect Japan’s economic growth with British interests. One consequence of this approach was a decision to encourage Japanese investment in Britain.

The Iron Lady’s visit to Japan was a resounding success, thanks to her strong personality and forceful views. Thatcher traveled energetically around the country and met numerous business leaders. In particular, she put great energy into persuading auto manufacturers to invest in Britain. As a result, both Honda and Nissan subsequently set up major production bases that created new jobs and helped revitalize the local economies in the regions where the factories were built.

A couple of weeks after Thatcher’s return to London, there was a change of leadership in Japan. The new prime minister, the youthful Nakasone Yasuhiro, created an immediate impact in Japan and around the world. A strong leader who aimed to turn Japan into a more internationally minded country, Nakasone made a big impression on Japanese foreign policy. At home, he pushed ahead with an ambitious program of privatization. Thatcher was impressed by her first meeting with Nakasone, at the G7 summit in Williamsburg, Virginia, in May 1983. In her memoirs, she wrote that Nakasone “was perhaps the most articulate and ‘western’ of Japan’s leaders in the time when I was Prime Minister.” During a meeting at the Williamsburg summit, Thatcher urged Nakasone to help ensure that Nissan invested in Britain. For all the talk of Thatcher as the “Iron Lady,” she could be a formidable saleswoman too.

The two leaders met repeatedly at summits in the years that followed. In her memoirs, Thatcher wrote: “Under Prime Minister Nakasone, Japan began to play a more active role in international affairs. So, when he made a visit to Britain in June 1984 I felt I was dealing with a Japanese leader who understood and sympathized with western values and had shown that he was prepared to make steps in the right direction on economic policy.” 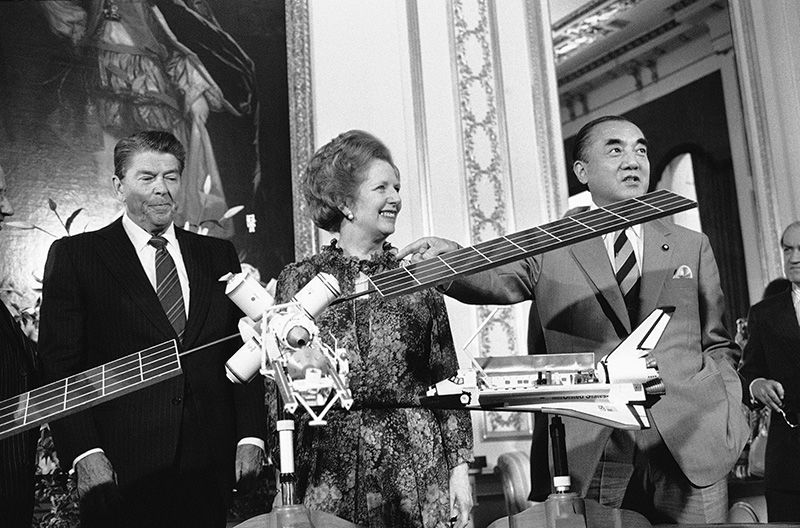 British Prime Minister Margaret Thatcher smiles as Japanese Prime Minister Nakasone Yasuhiro asks a question about a model of the proposed US manned space station, during a break at a London G7 summit meeting. US President Ronald Reagan looks on at left. (June 9, 1984. Photo: Bob Daugherty/AP/Aflo)

Thatcher and Nakasone shared a political outlook that was based on a firm belief in the power of self-reliance. In a famous interview in 1987, Thatcher said: “It is our duty to look after ourselves . . . People have got the entitlements too much in mind without the obligations.”

This spirit of self-reliance is sorely missing from Japanese society today. Too many people take it for granted that the state will look after them. But the government no longer has those kinds of resources to spare. In the years to come, people will have to learn to depend on their own efforts. Self-reliance is once more the order of the day. There is no doubt that Thatcherism played a major part in reviving the British economy during the 1990s. From a long-term perspective, it is clear that we need to rekindle this spirit of self-reliance in today’s Japan, where the country is struggling with a huge budget deficit and a declining birthrate. The need for self-reliance may turn out to be one of Margaret Thatcher’s lasting messages for Japan.