On February 14, figure skater Hanyū Yuzuru delivered a Valentine’s Day present to millions of fans watching him compete in the men’s free skating competition in Sochi, Russia: Japan’s first ever Olympic gold medal in the men’s event. Just 19 years old, Hanyū came into his own just as the great Russian skater Evgeni Plushenko, 31—identified by the young Japanese skater as a hero and inspiration—announced his retirement from the sport he has dominated for years.

Born on December 7, 1994, in the city of Sendai, Miyagi Prefecture, Hanyū laced up his first pair of skates when he was four. At the time the city was in the grip of a figure skating boom, thanks to the appearance in the 1998 Nagano Olympics of four skaters, including Honda Takeshi and Arakawa Shizuka (a gold medalist at Torino in 2006), who had honed their skills at Sendai’s rinks. At first he was tagging along behind his older sister, who attended skating classes taught by former Olympian Sano Minoru. But his casual enjoyment of the sport in those early years took a turn for the serious with the appearance of the Russian champion Plushenko on the international skating scene.

The young Hanyū was glued to the television during the 2002 Olympics in Salt Lake City, where a 19-year-old Plushenko took on fellow Russian Alexei Yagudin in the men’s singles event. The two Russians turned in daring, athletic performances, taking the men’s sport to new levels with their quadruple spins and difficult combination jumps. This was thrilling competition for the seven-year-old Hanyū to watch.

As Hanyū recalls, “My image of the Olympics was always as the place where Plushenko and Yagudin took each other on in their great clash.” In the end Yagudin took the gold medal, but it was the silver medalist Plushenko who captured Hanyū’s imagination with his explosive quadruple toe loops and Biellmann spins—the latter, a signature move for women in the sport, seen as particularly challenging for men, requiring tremendous flexibility to extend one leg behind the body and lift the skate high overhead while twirling on the other foot.

Hanyū, confident in his own flexibility, immediately set about mastering the Biellmann spin himself. He also styled his hair in a mushroom cut, the same as his Russian hero, and took to including a drawing of a smiling mushroom with his signature whenever he was asked for an autograph.

“It always took a long time to do an autograph that way,” he says, “but back then the mushroom was a lucky charm of sorts to me. I looked up to Plushenko in every way in those days. In many ways I still do now.”

Twelve years later, in February 2014, the Japanese skater was in the Iceberg Skating Palace with the Russian who inspired him. Hanyū and Plushenko met for the first time in competition at Sochi, where they faced off first in the men’s short program portion of the team event. 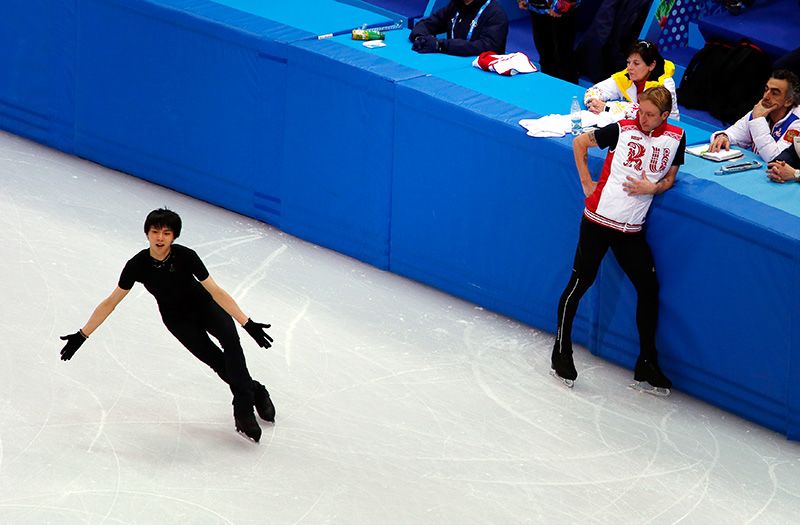 Plushenko had suffered a string of injuries since the 2006 Torino games. Indeed, an injury forced him to sit out much of the season leading up to the Sochi Olympics, including the European championships that served as the final qualifying round for skaters to make the Russian team. On the strength of his career to date, though, he managed to arrange a one-man Olympic qualifying test, earning a spot on the Russian squad with his still powerful moves. He had high hopes of standing atop the podium before the home crowd.

He did not let them down in his first outing on the ice, scoring a personal best of 91.39 points with rock-solid skating in the short program.

Hanyū, though, went beyond him. He flawlessly executed all three of his jumps, including a tough quadruple toe loop, and displayed masterful footwork in the steps portion of his routine. In his Olympic debut, the Japanese skater scored an incredible 97.98 points.

This was not enough to carry the Japanese team to victory, though. A strong Russian squad took the gold in the team event, leaving the Japanese off of the podium in fifth place. Hanyū, Plushenko, and the rest of the field turned to preparations for the men’s singles event to follow.

A Gold Medal; a New Start

The preparations did not go well for the Russian skater. Plushenko took a bad fall during a pre-short-program practice session, injuring his back and withdrawing from the competition. On February 13, Hanyū took first place in the short program with a world record score of 101.45 points. The next day he followed with another first-place finish in the free skating, taking his final score to 280.09 despite falling twice early in the routine. On Valentine’s Day, exactly 12 years after he had been transfixed by his Russian hero, Hanyū stood at the top of the skating world.

“It’s such a shame that Plushenko had to drop out,” stated the gold medalist. “But I’m so glad I got to skate against him in the team event. It was like a dream come true. I can’t thank him enough for all the inspirational performances he’s shown us in his career.”

Plushenko took the men’s sport to new levels of athleticism. Observers say that the Russian’s decision to press through injury and take the ice in Sochi was driven in part by his desire to put quadruple jumps back at the center of the sport, following American skater Evan Lysacek’s gold medal in Vancouver in 2010, won with only triple spins in his routines.

After those games, Plushenko and others argued that quadruple jumps should be weighted more heavily in the scoring, and the new scoring system introduced later that year implemented just that. Quadruple jumps were central to Hanyū’s routines at Sochi, and it may put Plushenko’s mind at ease to know that his crown has passed to an athlete who sticks quadruple toe loops consistently and even attempts the more challenging quadruple Salchow in competition.

Having cemented his reputation as the new “prince” of the skating world, Hanyū remains focused on his future: “My skating career is nowhere near its end.” Indeed, he is the second youngest male Olympic champion in history, with only Dick Button’s 1948 win at age 18 coming earlier. His gold medal, the first ever in the event for a Japanese man, seems likely to further inspire his efforts to be the world’s top skater.

“I have to say,” says Hanyū, “that I’m not satisfied with how I skated in these Olympics. But as a Japanese skater, I’m proud that I came in first. Now that I’ve got this gold medal, I feel like I’m finally at the start of my true career.”

His goal for that career, meanwhile, is simple: “I want to be a skater like Plushenko. A strong competitor who can skate without mistakes at any time, on any rink.” Hanyū spent 12 years preparing to take the ice at Sochi with his hero. The years to come will show whether we can view these Olympic Games as a ceremony where the old champion passed his torch to a new one.