The moment her performance finished, Asada Mao looked up and burst into tears. Then, in the midst of thunderous applause, she gave a little nod and with a beaming smile lifted her hands to the crowd.

Asada’s poor showing in the short program on the first day of the ladies’ single skating event in Sochi had left her well behind the field in sixteenth place. She bounced back in the following day’s free program, smashing her previous personal best of 136.33 with a score of 142.71 and rising to sixth.

“I felt tremendous pressure in the short program and I was afraid of performing the next day. It wasn’t that I was angry at myself afterward. I felt something I can’t put into words—I asked myself just what it was that I had done. But by achieving my best performance in the free skate, I was able to repay all the people who have supported me. That was the reason for my happy tears and smiles.”

It was a superb free skate program: Asada became the first woman to land eight triple jumps, including her signature triple axel. While she has hinted that this Olympics would be her last appearance in competition, this performance cements her as a skater who will linger long in people’s memories and the record books.

Dreaming of the Triple Axel

Asada Mao was born in Nagoya, Aichi Prefecture, on September 25, 1990. She started figure skating with her older sister at age five. An active little girl, she also enjoyed ballet and other dance, as well as gymnastics. In elementary school she was in the basketball club, and her speed made her a regular on the relay team. She has said she would have gone with track and field if she hadn’t dedicated herself to figure skating instead.

Asada’s greatest aspiration was to compete in figure skating at the Winter Olympics. She was in awe of the US skater Tara Lipinski, who took gold at Nagano in 1998 at the age of 15 years and 8 months. Athletic and lively, the young Asada threw herself into practice. It was while she was in elementary school that the triple axel became a major part of her daily thoughts. 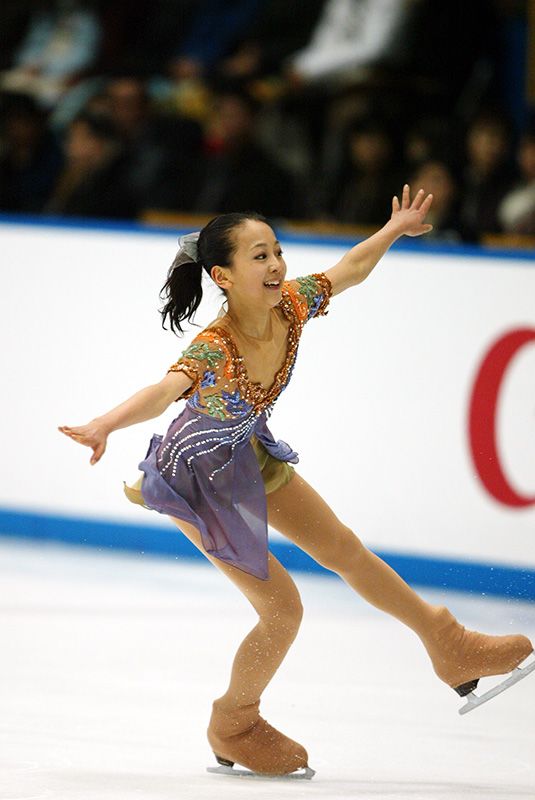 As the birthplace of Asada and seven other Olympic skaters, Nagoya is known as Japan’s “figure skating kingdom.” Children practicing on the city’s rinks are keenly watched by crowds of mothers. Asada was no exception.

When she began to show her jumping talent, she was taken on by coach Yamada Machiko. Yamada had previously coached Itō Midori, the 1992 Winter Olympics silver-medal winner who sparked the skating boom in Nagoya. After learning the basics of the six most common jumps, Asada mastered all of the triple jumps—including the most difficult axel—before she entered junior high school.

It was the triple axel, first successfully jumped in competition by Itō, that Asada worked on most. The most challenging of the six jumps in figure skating, the axel form is the only one with a forward takeoff, effectively adding an additional half-spin to every jump. Very few female skaters can perform it: the jump had only been landed in two different Olympics before Sochi, by Itō in Albertville in 1992 and by Asada in Vancouver in 2010.

Going Back to Basics

Athletes are always striving to do better. Asada’s three triple axels in Vancouver—one in the short program and two in the free—outdid Itō’s single success in Olympic competition to earn her a Guinness World Record.

However, after finishing with a silver medal four years ago, Asada decided on the drastic measure of going back to basics. “I’m disappointed with the result in Vancouver,” she noted. “I want to overcome that by putting on my best performance in Sochi.”

To improve her basic skating, she went to Satō Nobuo, considered the top Japanese coach in the sport. But going back to square one is not easy. Asada found that her jumping began to suffer, and soon she was making mistakes on all her axels.

Recovering jumping form after you lose it is not easy. She gradually improved some aspects, like her takeoff timing, but there was a period when her completion rate for the triple axel did not improve.

Sticking With Her Signature Jump

Including unnecessarily difficult jumps in your program and making mistakes on them is a major negative in scored competition. But Asada continued to jump triple axels no matter how often she ended up falling backwards onto the ice, hitting her hands and twisting her face in pain. Why? “Because I’m the only one who can do axels,” she explained.

Asada has the pride and instinct of a top athlete. At a press conference before the Sochi competition, she said: “I’ve looked up to Itō Midori since I was a child and I wanted to continue her triple axel tradition at the Olympics. I’m determined to stick with the axel in Sochi.”

From Disaster to Miracle

The free program started just 21 hours after Asada’s stumbling short program. Having composed herself in the morning practice, she skated to Rachmaninoff’s second piano concerto. This was the same piece Itō Midori used when she landed a triple axel in the free program in Albertville. Asada continued Itō’s legacy by successfully completing her opening triple axel, as well as all of her subsequent jumps. She also displayed great technique in her steps and spins.

Asada’s base score in the free program was 66.34, much higher than the winners of the gold, silver, and bronze medals, Russia’s Adelina Sotnikova (61.43), South Korea’s Kim Yuna (57.49), and Italy’s Carolina Kostner (58.45). Her performance component score, judged in five categories, was the third highest, behind Sotnikova’s and Kim’s, but this may have been affected by her appearance in the second group, said to be a difficult one in which to win points. If she had skated in the final group, her score may well have been higher.

Unbending in her convictions and refusing to give up no matter how often she fell, she sometimes appeared stubborn. But her love of the triple axel was what made her Asada Mao.

“I’ve got a kind of revenge on myself for Vancouver. I put on my best performance here.” When the competition was over, she looked happy that she had been able to give it her all. She’s a tough competitor on the ice, but her endearing attitude has won people’s hearts. That is Asada’s unique appeal.

(Originally written in Japanese on February 24, 2014. Banner photograph: Asada Mao in tears at the end of her free program in the Sochi Olympics ladies’ single skating on February 20, 2014. Photo courtesy of the New York Times/Aflo.)