The fifth consecutive appearance of the Japan men’s soccer team at a World Cup Finals tournament came to an early end on June 24. 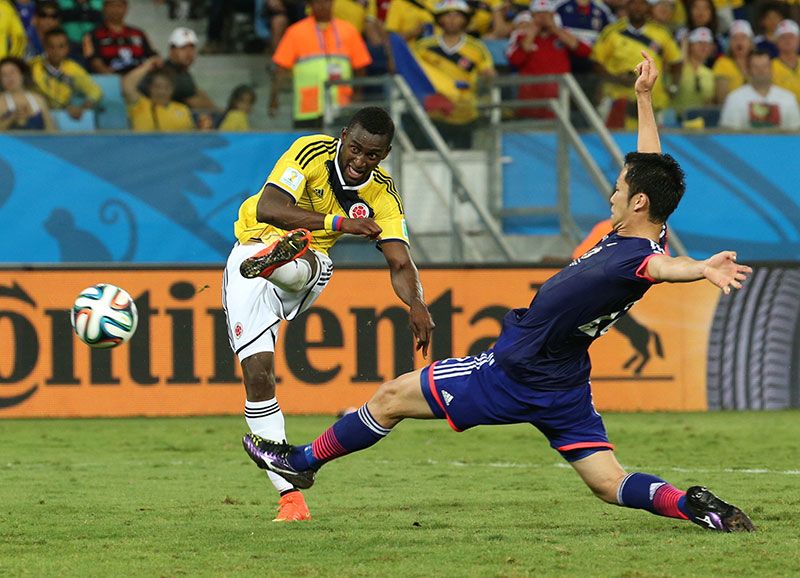 The team’s final record stands at one draw and two losses, meaning an exit at the group stage. Needless to say, this performance stands up poorly in comparison with Japan’s progress to the last 16 four years ago in South Africa and before that at the 2002 World Cup jointly hosted by Japan and South Korea. But more than that, the levels of expectation that stemmed from the presence of players like Honda Keisuke (AC Milan), Kagawa Shinji (Manchester United), and Nagatomo Yūto (Inter Milan)—all with experience at some of the world’s top clubs—mean that the disappointment this time is especially great.

But Samurai Blue fans must not lose sight of one thing that was decidedly different about the buildup to this year’s World Cup: it was the first time in Japanese soccer history that the players had openly aspired to become the world’s number one side. With Italian head coach Alberto Zaccheroni at the helm, the players of the national team made the trip to Brazil with high hopes. What does their performance ultimately tell us? 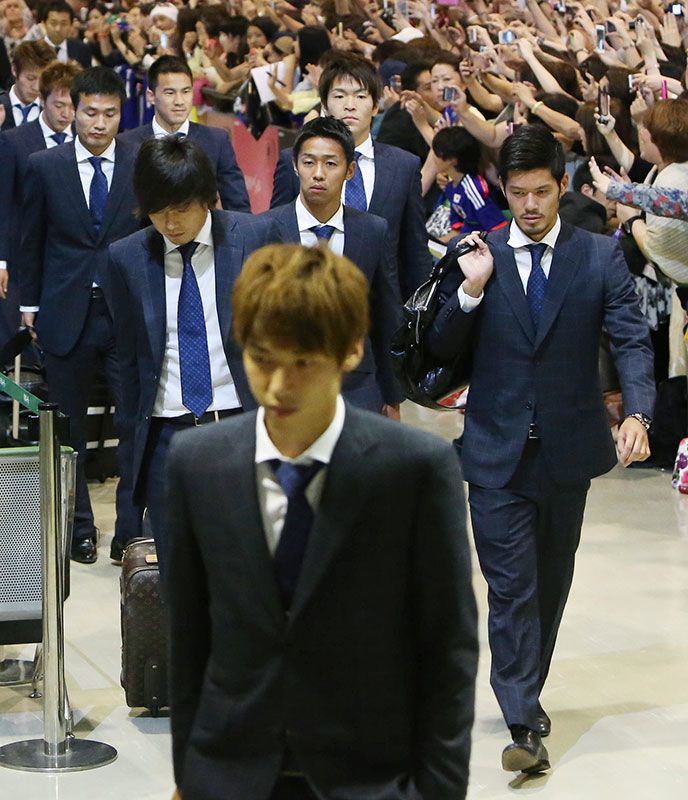 The players return to Japan after their group stage exit. (© Jiji Press)

Japan’s group stage began on June 14 against Côte d’Ivoire. The game started well, as Samurai Blue went ahead on Honda’s third career World Cup goal. But just as it seemed that the team might be able to capitalize on this early success, the players found themselves battling merely to preserve their slender lead, ultimately slumping to a 2–1 reversal.

Zacccheroni’s men were clearly shaken by the way they conceded two goals in just two minutes midway through the second half. This loss in their opening game would weigh heavily upon the players for the remainder of the tournament.

In the following fixture on June 19, Samurai Blue proved unable to break down a Greece side reduced to 10 men by a first-half red card, the game ending in a scoreless draw. And five days later, in a match Japan needed to win by two clear goals to have any realistic hope of qualifying for the last 16, the team battled bravely but went down 4–1 against Group C leaders Colombia.

Once the final whistle in that third match sounded, condemning Japan to a group stage exit, the players remained on the pitch. Nagatomo slumped to the turf and sat motionless for some time, only returning to his senses when Colombia midfielder Freddy Guarin, an Inter Milan teammate, came over to offer a consoling arm around the shoulder. Honda, meanwhile, trudged away, eyes vacant, lifting his face two or three times to mutter at the heavens. The squad had expected so much of themselves that the harsh reality of defeat seemed difficult to absorb.

A Lack of Intensity and Mental Strength

Japan’s three matches at this tournament all unfolded somewhat differently, but with a number of common threads. First was the mental fragility of the team.

This was especially prominent in the Côte d’Ivoire match, where the players’ nervousness was palpable. In postmatch interviews, several spoke of not being able to “play their own football,” which to my mind suggests that their movement was restricted by some kind of mental block.

The most enjoyable style of soccer, both for the fans and the players themselves, is a high-intensity passing game. The ball is won through aggressive pressing high up the pitch while movement, intricate passing, and attacking combination play break down the opposition and create chances to score.

But such a style requires the players to cover a lot of ground. In Brazil, Japan simply did not put in the necessary legwork. Although the players collectively covered a greater distance than their opponents in each of their three matches, even more was required. There simply wasn’t enough of the “intensity” about which coach Zaccheroni talked so often over the four years of his tenure. With this word the Italian helmsman referred to power and pressure—things that Japan lacked in Brazil, both in front of goal and in the way the players won and used the ball.

One player for whom hopes had been particularly high, but who finished the tournament goalless, was Kagawa. “We lost to ourselves,” he lamented after the final match. “This tournament only comes around once every four years, but we didn’t have the right mentality nor the strength as a team to play the way we wanted.”

Probably the player who gave the best personal performance was Nagatomo, who, shoulders slumped with disappointment, added: “We didn’t have that decisive intensity or precision when we had the ball, and as players we just weren’t all on the same page. It’s not about conditioning, though—it’s that we showed too much hesitation.” 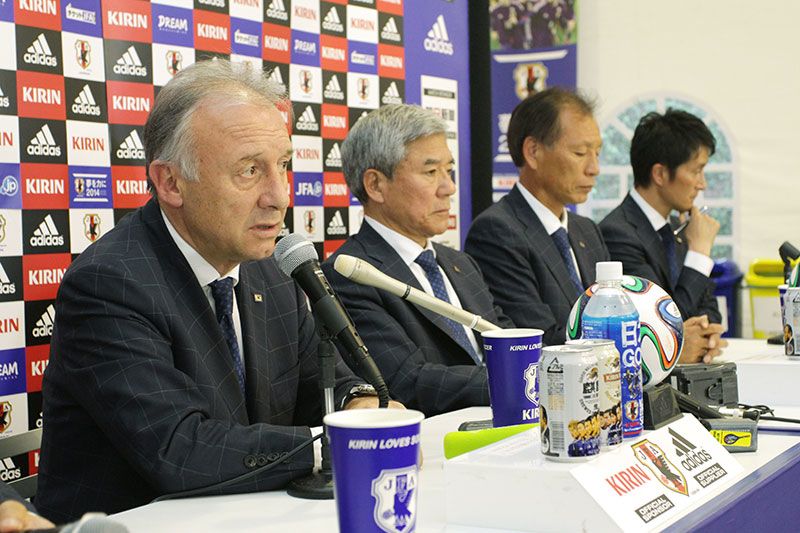 After Japan’s exit, Zaccheroni tried to offer some encouragement: “This team has its own identity now. That’s something it’s important to hold on to.” But just how clear an identity does the team really have? The responses from the players themselves would, I suspect, be somewhat mixed.

Captain Hasebe Makoto offered: “We weren’t able to accomplish what we’d been working so hard toward for the last four years. But now we need to decide whether to look for a new direction or to continue on the path we’ve been on up to this point. Thinking about Japanese soccer ten, twenty years from now, it’s my personal opinion that we should carry on this way.”

Holder of the Japanese record of 146 international caps Endō Yasuhito, now a veteran of three World Cups, agreed with his captain. “I don’t think that the end result this time means that everything was a total failure,” he said. “We have stuck with this style for the last four years and I think we have moved forward as a team, even if only one or two steps. Japanese soccer is about moving the ball quickly and playing an attacking game, and that needs to continue. There’s no doubt about that.”

As the Dust Settles, a Solid Foundation for Progress

This World Cup aside, the last four years have actually been highly fruitful for Samurai Blue. Triumph in the Asian Cup, along with away victories over France and Belgium, and a record of three wins and one draw in four games against chief Asian rival South Korea are just some of the team’s recent proud achievements.

The fact that many Japanese fans feel so aggrieved at the way their dreams were dashed in Brazil proves that they had dared to dream in the first place. What we saw from Japan this summer on the biggest stage of all may well have been a disappointment. But even in defeat there is a clear resolve among the players to stick to the principles that have brought them this far.

Even Honda, despondent in the aftermath of the Colombia game, sounded a note of positivity as he opined: “I feel we need to rethink our benchmarks, but there’s no plan to change our target of becoming world number one.”

In November 2005 I attended a game in Scotland, where Nakamura Shunsuke was at the time playing for Glasgow Celtic. Also present in the stands that day was legendary musician Rod Stewart, a man with a footballing past of his own and a long-term season ticket holder at Celtic Park. I sought him out after the match and asked for his opinion on Nakamura’s performance. “He had a good game,” the aging rock god replied, “made a few good tackles, didn’t he?”

But Nakamura hadn’t made any tackles. I was puzzled by this response, and asked a Scottish journalist what it could have meant. “That’s an old cliché people use when they want to say someone had a good game,” came the answer.

The tastes of fans and what they want to see on the soccer pitch vary from country to country. In Germany for example, there is a fondness for one-on-one situations and the relevant statistics are a feature of the local match reports. And for every country where frenetic physicality is valued, there is another nation where artistry and technique are prized above all else.

The right way forward for Japan is to further cement the attacking principles that have gained such a solid foundation over the last four years while also addressing the team’s longstanding weaknesses and introducing a greater degree of variation in attack. There is a pressing need, too, to foster the mental toughness and tactical adaptability that are required to emerge victorious.

The confidence in these methods is reflected in the high targets Japan’s players set for themselves and the way the supporters bought into these aspirations as they cheered their team on. For Japan, this is the legacy of the Brazil World Cup.