The Furious Theater of Women’s Professional Wrestling in Japan

It is not well known, but Japan has a unique heritage of women’s professional wrestling.

The birth of the sport now known in Japan as joshi puroresu came in 1948, only three years after the end of World War II. The spectacle began as entertainment for drinkers in the minor theaters, cabaret clubs, and strip joints of the nation as an erotic performance in which contestants would strive to capture the opponent’s garter belt. Such entertainment was soon forced underground by the attentions of the police, but feminine grappling made a comeback in Japan as fully fledged professional wrestling when noted American exponents Mildred Burke and Mae Young were brought to this country for a series of events in November 1954.

Several earlier promotions were brought together in 1968 under the banner of All-Japan Women’s Pro-Wrestling, and women’s wrestling became an occasional feature on television throughout the 1960s. Joshi puroresu events of the day often featured female competitors performing songs in the ring, and even taking on male opponents of slight stature.

Rescued from the Doldrums by the Beauty Pair

Moving into the 1970s the sport began to lose popularity, and for a time it even seemed as though the major promotions might sink into bankruptcy. What saved All-Japan Women’s Pro-Wrestling was the emergence of superstar duo Beauty Pair, comprising wrestlers Jackie Satō and Maki Ueda. Their November 1976 single “Kakemeguru seishun” (Rushing Spring) didn’t make a huge impact on its initial release, but gathered steam the following year to sell a whopping 800,000 copies. Viewing figures for female wrestling saw an almost instantaneous increase. Broadcasters met this demand by including weekly events in their primetime schedules.

Satō, who projected the air of a belle in male drag, gained a particular following, and women’s wrestling—which had once been mere titillation for drinkers—saw its audience shift to one mainly composed of schoolgirls. For these new, younger fans, the songs were a bigger draw than the bouts themselves, and though Beauty Pair’s musical offerings could at best be described as somewhat amateurish, for many it was more than enough to see the imposing form of Jackie Satō singing and dancing.

In the decade that followed, the partnership of Nagayo Chigusa and Lioness Asuka took this popularity to the next level as the duo Crush Gals. But these two were not just about churning out hit singles—they also had the wrestling skills to wow spectators with their displays on the mat. 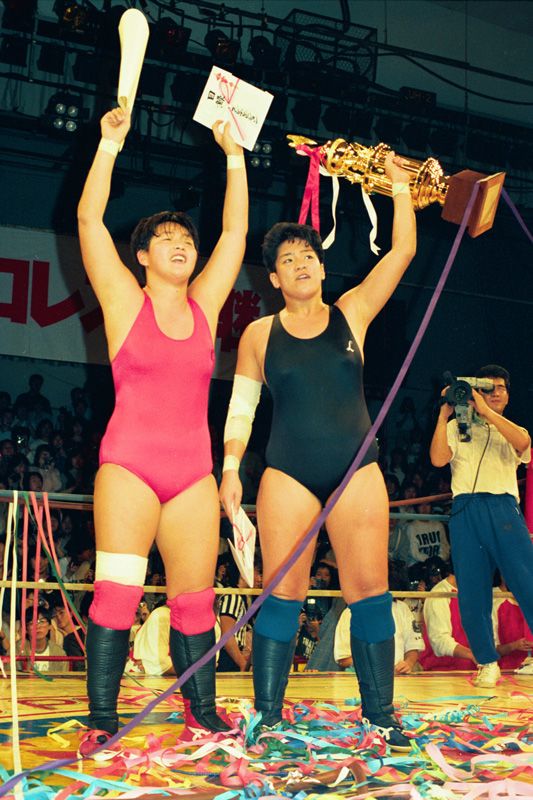 Nagayo Chigusa is possibly the single greatest genius in the history of women’s professional wrestling. The sport typically involves fairly simplistic storylines revolving around the conflict between heroines and villainesses, but Nagayo transformed her own matches into a whirlwind of excitement and suspense, driving spectators wild as she toyed with opponents in the ring.

Asuka partnered the prettier, more youthful Nagayo with a spectacular arsenal of throws and kicks. Together they gave their all against a host of formidable opponents, who were often bigger, stronger, and not ashamed to break the rules with all manner of fiendishly underhand tactics.

In one 1985 bout at Ōsakajō Hall, Nagayo was badly cut when opponent Dump Matsumoto stabbed her in the forehead with a fork. Drained of strength, she slumped to defeat, and immediately afterward made good on a prematch promise by allowing her head to be completely shaved. The 15,000 fans, who had crammed into the arena to watch these shocking events play out from start to finish, wailed with anguish before many also succumbed to tears.

Through such scenes, reminiscent in some ways of Christ's crucifixion, the rich sense of theater that Nagayo Chigusa brought to the world of joshi puroresu had a massive impact. And in turn, besotted with their idol, more and more young girls began to dream of becoming wrestlers themselves.

Each year, All-Japan Women's Pro-Wrestling holds an audition to select new recruits. In 1985, the year that the Crush Gals were at the peak of their powers, the organization received some 3,000 application forms. By the time of the final draft, the 200 hopefuls who had been invited to participate in physical trials had been whittled down to an intake of just 10.

But the Crush Gals boom gradually subsided, and the two members eventually slipped into retirement. They left behind a roster of elite physical specimens who, devoid of Nagayo’s charisma and dramatic flair, had no option but to turn to a brand of wrestling that pushed their athletic gifts to the extreme.

Harsh Reality of Life Beyond the Mat

In the golden age of women's wrestling in Japan, some 250 events were held each year, and the stars even went to work on days when no matches were scheduled. A dozen or more wrestlers would board a bus and engage in promotional duties around the clock. But such an indentured lifestyle brought with it much stress. In a harsh hierarchical system reminiscent of the military, the apprentice kōhai were assigned to a mentor, or senpai, and bound to do their superior's laundry and other menial tasks.

At the same time as wrestlers developed a close bond with their fellows, they were also rivals. Friend or not, as soon as a rookie wrestler made it into the spotlight, the rest of her comrades would be consumed with jealousy. Professional wrestling is often dismissed as a pantomime, in which the results of the matches are predetermined. But there are exceptions, with this uncertainty bringing more than a frisson of excitement to the women's game. And as long as an opponent was not so seriously injured as to become unable to fulfill subsequent professional engagements, once in the ring acts of alarming brutality became acceptable.

The wrestlers are divided into factions. In a setting where a significant proportion of the competitors are homosexual, on occasion tangled romantic rivalries have also been known to come into play. Athletes denied the chance to participate in the main event, or who had found their amorous advances rebuffed, would take out their frustration on their younger rivals or love interests. Dangerous maneuvers and full-on kicks to the face sometimes resulted in broken jaws and even backs. There were also cases of wrestlers plummeting from four-meter steel fences directly onto an opponent's chest, or dropping a foe from a second-floor balcony onto the desks arrayed below.

For much of the 1990s, joshi puroresu was regarded as the sport’s most dangerous incarnation, showcasing a brutality that at times made spectators want to look away. But all in all, this combination of savagery, nobility, and a certain innocent purity added up to a frightfully compelling spectacle.

But as Japan’s economy slumped into recession, wrestling fans became less and less keen to shell out for expensive tickets. What remains of the sport in the twenty-first century is severely diminished in scale. Every year in the early nineties saw multiple joshi puroresu events that drew crowds of over 10,000 to arenas across the country, and a smaller number of stadium shows that attracted gates in the vicinity of 50,000. Most events nowadays play out at venues with a capacity of no more than 200.

The wrestlers themselves have also dwindled in number and their athleticism has also declined. Very few female wrestlers nowadays make their sole living from the sport, with most needing to take on part-time jobs in order to pay the bills.

Stars of the New Breed

Yet joshi puroresu continues to provide kicks that you simply cannot get from other sports.

Two wrestlers I particularly recommend provide a great contrast: the orthodox skills of Satomura Meiko, who encapsulates all the best qualities of Japanese women, and the thoroughly clownish antics of comedienne Hirota Sakura. A search for their names on YouTube provides a sense of two compelling female figures from Japan. 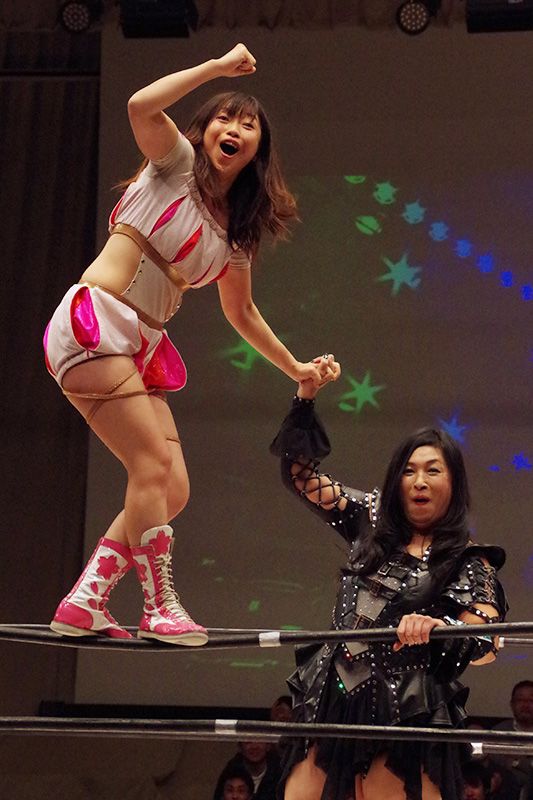 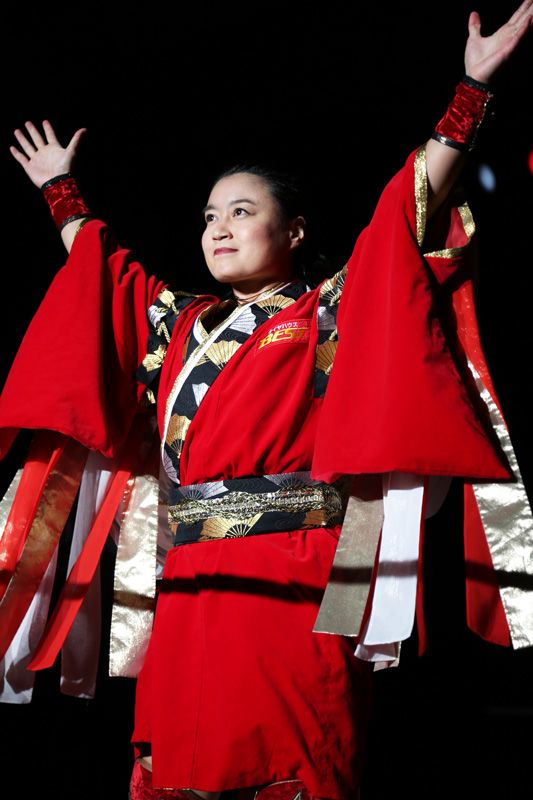 The shrines and temples of Kyoto, the nation's many hot spring resorts, the maid cafes of Akihabara, and Kichijōji's famous Ghibli Museum are all fine destinations for sightseers. But during a trip to Japan, I also recommend taking in a joshi puroresu event. Audiences are guaranteed a warm welcome from the radiant smiles on the faces of the strong, athletic, Japanese women who take to the ring brimming with passion and ideas.