Dogwoods for Cherries: The Other Sylvan Centennial in the US-Japanese Relationship

Washington DC’s beloved cherry blossoms are a well-known symbol of US-Japanese friendship. Japan’s gift 103 years ago of the trees that stand along the Potomac River is an oft-told tale. Less well known is the US gift of flowering dogwoods to Japan three years later in reciprocation.

The gift from the United States whetted Japanese interest in flowering dogwoods, and the trees now beautify settings throughout Japan. But of the 60 saplings in the 1915 gift, only one tree remains. It stands on the grounds of Tokyo Metropolitan Engei High School, a horticultural school in the Fukasawa district of Setagaya, Tokyo. The dogwood occupies a spot slightly apart from the ginkgo trees that line the school’s entry walkway. It towers some eight meters tall―twice the height of the dogwoods commonly seen along roadsides and elsewhere in Tokyo.

Engei High School hosted a ceremony on April 10 to mark the centennial of the gift of dogwoods. Among the dignitaries in attendance was the US ambassador to Japan, Caroline Kennedy. Taking a spade in hand, she planted a dogwood sapling as part of the ceremony.

Also getting into the centennial spirit was Japan Post. It teamed with the US Postal Service in Japan’s first-ever paired issuance of commemorative postage stamps with another nation.

The historic dogwood tree on the grounds of Engei High School and a close-up of dogwood blossoms.

The US government’s gift of 60 dogwood saplings consisted of a shipment of 40 white-blossoming dogwoods and a separate shipment of 20 pink-blossoming trees. Accompanying the white-blossoming dogwoods on behalf of the US government was the agricultural botanist Walter Tennyson Swingle (1871–1952). In his greeting, he praised the Japanese for their strong aesthetic sense and compared the American love for dogwood blossoms to the Japanese affection for cherry blossoms.

Japan’s dogwoods found homes in Hibiya Park, in Koishikawa Botanical Garden, and at 14 other sites, including Engei High School. The high school received two trees, which thrived there. They were the only trees found in a 1990 survey conducted nationwide to locate the original 60 dogwoods. One of them toppled in a 1996 typhoon, leaving only the single surviving tree.

Engei High School received its dogwoods presumably because of a former principal’s role in Japan’s cherry tree gift to the United States. Kumagai Yasozō (1874–1969) was the founding principal of the high school, which opened in 1908. He oversaw measures for ensuring the safe arrival in Washington of Tokyo’s 1912 gift of 3,020 cherry saplings.

Ohio’s gift, presented in 2000, comprised 150 saplings, of which two were planted at Engei High School. The school’s principal, Tokuda Yasunobu, thus hailed the tree planted by Ambassador Kennedy at the centennial ceremony as “our third-generation dogwood.”

The Japanese named the flowering dogwood hanamizuki because it belongs to the family, Cornaceae, known in Japan as mizuki and because it exhibits prominent blossoms (hana). The trees blossom in April and May in Japan, as in the United States. What we generally regard as the “flower” consists of four petal-like leaves that radiate outward beneath a small flower cluster.

Munemura Hideo, the president of Engei High School’s alumni association, notes the popularity of the dogwood as roadside foliage. He reports that the dogwood is second only to the ginkgo in the number of trees planted along Japanese roadways.

There are numerous reasons for this popularity. Dogwood trees are of less-imposing size than ginkgoes and poplars and are resistant to insect pests. Their blossoms provide a continuation of floral beauty just as the cherry blossoms have scattered, and their rich summer foliage furnishes welcome shade. Dogwoods don’t put out roots in a manner that damages asphalt roads and they are easy to care for and are thus easy on municipal budgets.

In an aside, Munemura suggests a possibly evangelical factor in the US gift of dogwoods. He cites a legend that identifies dogwood as the wood used in the cross on which Jesus Christ was crucified. In the legend, God curtails the dogwood trees’ height so they might never again be used for that purpose.

Dogwood trees are indeed (and fortunately!) too small to yield pillars or beams for crucifixions. But the hard wood makes excellent skewers, which Japanese use in broiling fish and other food items. 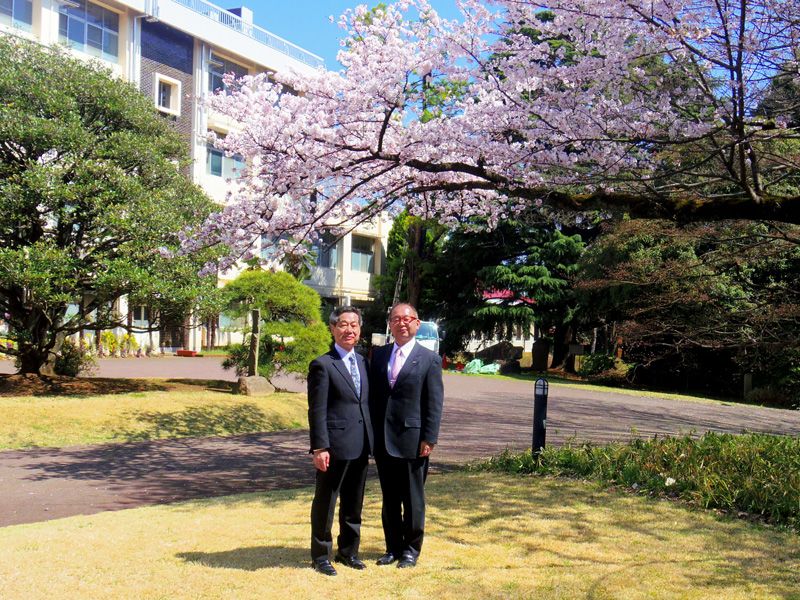 Tokuda Yasunobu (right), the principal of Engei High School, and Munemura Hideo, the president of the school’s alumni association.

Japan Post teamed with the US Postal Service in marking the dogwood centennial with joint issues of commemorative postage stamps; this was the first stamp design collaboration between the two nations. The Japanese version is a set of 10 stamps that feature images of dogwood and cherry blossoms and famous government buildings in Japan and the United States. Two of the stamps in the set feature designs by the US Postal Service: one a rendering of cherry blossoms and the Lincoln Memorial and the other an image of dogwood blossoms and the US Capitol building.

Dogwood blossoms and the US Capitol building (stamp designed by USPS)

Cherry blossoms and the Lincoln Memorial (stamp designed by USPS)

“Hanamizuki” is the title of a 2004 hit by the J-Pop singer and lyricist Hitoto Yō. The song exercised such powerful social impact that it even ended up in a high school textbook used throughout Japan. The textbook, Genius English Communication II, notes the iconic position of dogwood and cherry trees in US-Japanese relations.

Although the lyrics suggest at first glance a simple love song, the textbook explains that “Hanamizuki” actually has a deeper meaning. Hitoto wrote the song after the terrorist attacks of September 11, 2001.

“Since its release in 2004, ‘Hanamizuki’ has become a well-known pop song in Japan,” continues the textbook. “Interestingly enough, however, few listeners recognize in the lyrics Hitoto Yō’s message of peace, believing it is merely a love song.”

Hitoto has tapped the imagery of the dogwood blossoms memorably. Most important, she has broadened the meaning of the imagery. Hitoto has transformed an icon of US-Japanese friendship into an appeal for world peace.