Japan Forfeits 30 Years to the Gyrations of the Yen

What was once called Japan’s lost decade has now persisted for much longer than 10 years. Despite hopes that the policies of Abenomics would generate a virtuous circle of recovery, turmoil overtook the world economy before they could do so. The yen appreciated, stock prices fell, and it does not seem likely that the negative interest rate of the Bank of Japan will resuscitate the economy.

Japan’s lost decade is usually thought to have begun in 1991, when a land-price bubble collapsed. It would be better, however, to count the lost years from 1985, when the speculative bubble began to inflate. Without the bubble, there would have been no collapse or the aftereffect of long-term stagnation. The country has already forfeited three decades.

Japan became the world’s top exporter of industrial products in 1985. The limits of export-led growth were, however, already becoming apparent, as exemplified by mounting trade friction between Japan and the United States. The Plaza Accord that unleashed the unprecedented appreciation of the yen also took place in 1985. This is when Japan’s economy began its years of wandering at the mercy of a gyrating yen.

The Catalyst: The Plaza Accord

The research of Harvard University Professor Dale Jorgenson and others discloses that the yen was consistently undervalued against the dollar prior to the Plaza Accord in terms of purchasing power parity. A yen that was estimated to be undervalued by 13% in 1985 became overvalued by 28% in 1990 and by 75% at its peak in 1995.

In the first half of the 1980s, the forceful tightening of monetary policy by US Federal Reserve Chairman Paul Volcker to rid the economy of inflation led to high interest rates and a strong dollar in the United States. On September 22, 1985, the finance ministers and central bank governors of Japan, the United States, Britain, Germany, and France gathered at the Plaza Hotel facing Central Park in New York City, where they agreed to coordinated intervention in foreign exchange markets to correct the strong dollar by increasing the value of nondollar currencies. Minister of Finance Takeshita Noboru and Bank of Japan Governor Sumita Satoshi participated from Japan.

At the time of the accord, $1 traded for about ¥240. The intention of Takeshita and others was to let the yen appreciate to about ¥200/$1, but the yen did not stop there. At the start of 1987, the yen fell below ¥150/$1. The Louvre Accord of February 1987 to halt the depreciation of the dollar failed to do so, and the yen strengthened to ¥120/$1 by the start of 1988. Intervention by currency authorities to sell dollars for yen had no effect. In just three years’ time, the dollar’s value had fallen by half. 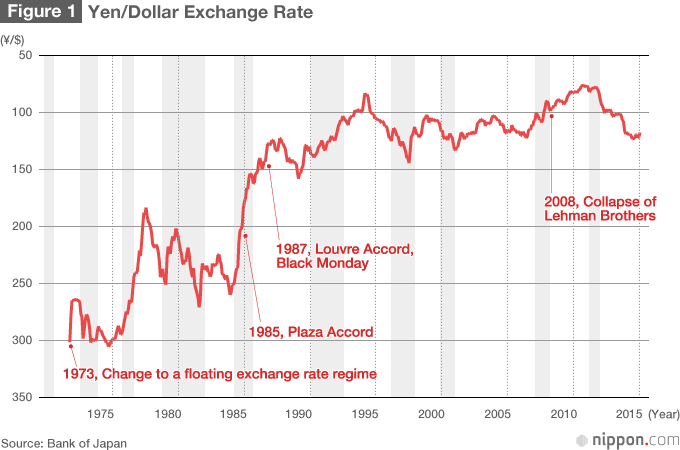 Japan’s exporting industries cried out in agony. To respond to the slump induced by the strong yen, the government and the Bank of Japan sought to promote domestic demand. The BOJ reduced the official discount rate five times in 1986 and 1987. The government reversed austere fiscal policies and expanded public works spending.

While the economy began to recover toward the end of 1986, Japan erred by overreacting to Black Monday, when US stock prices collapsed on October 19, 1987. The BOJ hesitated to reverse an accommodative monetary policy from concern about its adverse impact on the world economy. The official discount rate remained at an all-time low of 2.5% for two years and three months, and banks’ aggressive lending to companies fueled the rise of land and stock prices.

The Massive Failure of Investments

Thomas Piketty’s Capital in the Twenty-First Century includes a chart that can be understood at a single glance. It is a graph that depicts the ratio of private-sector capital to national income for advanced economies. Japan’s ratio forms an extraordinary spike, shooting up from under 500% in 1985 to about 700% in 1990. Piketty indicates that the largest bubble to inflate between 1970 and 2010 was without question Japan’s bubble of 1990. 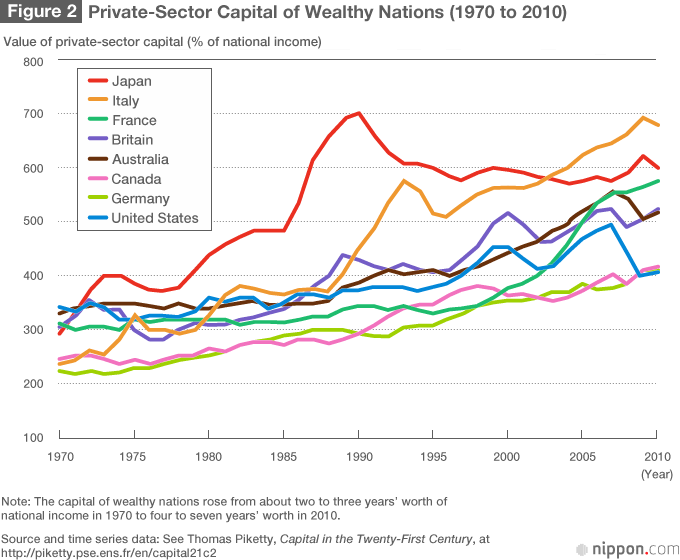 What the bubble represented was the massive failure of investments. The act of investing is one where a desirable future is imagined and where resources are invested toward its realization. Japan, however, had no sure vision of the future at that time. Rather, the nation simply chased after the lead runners of Europe and the United States for many years in an economic marathon.

It was 1979 when Ezra Vogel published Japan as Number One. As inflation and stagnation beset advanced economies in the aftermath of the oil crises earlier in the 1970s, Japan was the first to escape this mire thanks to the success of the manufacturing sector in dramatically reducing the energy intensity of production.

Now that Japan had advanced to the head of the pack, though, there was no one left to guide it forward. In his 1985 Chika kakumei (translated as The Knowledge-Value Revolution), the economist and author Sakaiya Taichi argued that Japan should transition from an industrial society of standardized mass production to a knowledge-intensive society where the value of knowledge reigns supreme. Had this route been chosen, a Silicon Valley might have sprung up in Japan.

What actually transpired was a land-price revolution where real estate prices surged upward. Excess liquidity encouraged many companies to engage in financial engineering, to invest in real estate, and to develop resorts and channel large investments into their core businesses. With the collapse of the speculative bubble, what came to be known as the three excesses—excess fixed assets, excess employment, and excess debt—fettered Japanese companies for a long time.

The failed policies and aimless wandering from the collapse of the speculative bubble to the financial crisis have been written about in dozens of books. Here I will focus on the relationship between the gyrations of the yen and macroeconomic policy.

Under a floating rate regime, higher fiscal expenditures funded by the increased issuance of government bonds would invite the appreciation of the domestic currency and reduce exports through higher interest rates and the inflow of capital from abroad. As a result, the effects of higher fiscal spending would be offset by currency appreciation. The reason the yen surged upward immediately after the Great East Japan Earthquake was market participants’ anticipation that fiscal expenditures would be increased to fund reconstruction efforts.

During Japan’s lost years, monetary policy that should have been effective became less so due to poor timing and half-baked measures, while lavish public works spending with doubtful effects resulted in the massive accumulation of government debt.

As noted above, the excessively long period of monetary easing during the years that Sumita was BOJ governor gave rise to a speculative bubble. When the BOJ turned to tighten monetary policy in May 1989, Sumita and his successor, Governor Mieno Yasushi, raised interest rates five times in just 15 months. Rapid tightening followed by a delay in loosening monetary policy quickly crushed the bubble and deepened the economic wounds. Monetary policy proved to be effective in loosening and tightening, but adversely so.

Insufficient monetary easing after the collapse of the bubble prolonged deflationary conditions, which is typified by BOJ Governor Hayami Masaru’s precipitous August 2000 reversal of a zero interest rate policy reinstated half a year later, in March 2001. Also, following the subprime mortgage crisis and the demise of Lehman Brothers, Japan’s accommodative monetary policies could not keep up with the aggressive quantitative easing by the Federal Reserve in the United States, which served to sustain the appreciation of the yen and deflation.

Government efforts to address the strong yen through increased fiscal spending began with the emergency economic measures decided by the administration of Prime Minister Nakasone Yasuhiro in 1987, with total outlays of ¥6 trillion. Following the collapse of the bubble, emergency measures exceeding ¥10 trillion centering on public works spending were repeated by the administrations of Prime Ministers Miyazawa Kiichi, Hosokawa Morihiro, and Murayama Tomiichi, regardless of the ruling political party.

If the Mundell-Fleming model is correct, it is reasonable to think that Japan’s expansion of fiscal expenditures due to fears of a strong yen contributed to the further appreciation of the yen. But other factors were also likely at play. Public works spending was viewed as a vote-getter and had great appeal for politicians. Moreover, fiscal authorities who disliked the issue of deficit-financing bonds are thought to have prioritized public works spending that could be financed with construction bonds, instead.

In an article titled “Japan’s Road to Deep Deficit Is Paved with Public Works” appearing in the March 1, 1997, edition of the New York Times, Japan’s wasteful public works spending was reported with amazement, citing the example of a futile “agricultural airport” way out in the sticks.

Japan’s overreliance on public works spending resulted in the mass production of nonessential and non-urgent social overhead capital and became a factor increasing the public debt to more than ¥1 quadrillion. The number of construction workers climbed from 5.3 million in 1985 to 6.85 million in 1997. Their sharp decline in subsequent years meant that many workers lost their jobs. 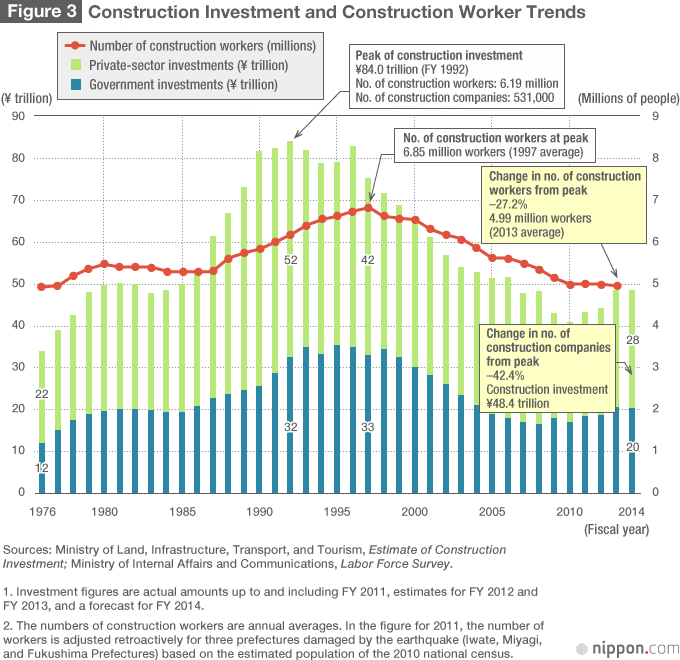 Japan was not the only nation where a speculative bubble burst. By examining the situation in Sweden, where a bubble deflated around the same time, and the situation in the United States following the subprime mortgage crisis, we can identify how they were able to overcome postbubble slumps.

First of all, their governments intervened to accelerate the disposal of bad debts and to inject public capital into banks so as to restore confidence in the financial system. Then, to circumvent deflation, they undertook decisive monetary easing and the depreciation of the currency.

Japan was slow to act in disposing of bad debts, and financial system turmoil throttled economic activity. Insufficient monetary easing failed to correct the excessively strong yen, and companies losing international competitiveness sought to reduce costs, thereby enabling deflation to take hold. The belated monetary easing “of a different dimension” by BOJ Governor Kuroda Haruhiko did achieve the depreciation of the yen, but the dislocations of the global economy since the start of 2016 have diminished its effect.

Macroeconomic policies must come together with growth strategies. Japan’s successful experience as an industrial nation is interfering with its adaptation to globalization and the spread of information technology. A potential growth rate of less than 1% and the massive savings surplus of the corporate sector speak to Japan’s inability to plan its future.

The Davos forum of 2016 was organized around the theme of the fourth industrial revolution. The gathering was guided by an awareness that all industries and nations are being swept up in revolutionary changes driven by such technological innovations as artificial intelligence, robots, and the Internet of Things. This is nothing other than a knowledge revolution broadly understood.

The error Japan made 30 years ago of confusing the value of land for the value of knowledge must not be repeated.