The Importance of Being Mishima Yukio

Culture Nov 24, 2017
On November 25, 1970, the celebrated author Mishima Yukio shocked Japan with his ritual suicide. Damian Flanagan argues that his death went beyond a nationalistic call to arms or the final act of a madman, carrying real literary significance and shedding light on Mishima’s final artistic aims.

The Shocking End of an Author

November 25 this year marks the forty-seventh anniversary of the so-called Mishima Incident—one of the most shocking happenings of postwar Japanese history. What happened in the space of 80 extraordinary minutes that bright morning in 1970 has been minutely chronicled, yet still resounds in controversy and enigma.

The events, at least, are clear: Mishima Yukio, Japan’s greatest postwar literary talent, led four young cadets of his private army, the Shield Society, into a pre-arranged meeting with a general at a Self-Defense Forces facility in Ichigaya, Tokyo. Expecting nothing more than some pleasantries, the general was stunned when Mishima’s men suddenly seized, gagged, and threatened to kill him unless all the personnel on the base were immediately summoned to hear the author speak. After repeated scuffles with officers attempting to break into the hostage room, Mishima eventually strutted out onto a large balcony outside the room and addressed up to 1,000 military staff on the parade ground below.

Mishima hectored them about the need for constitutional reform and fulminated that the “Peace Constitution” did not even recognize their existence. Intending to speak for a half-hour, he was immediately confronted with a barrage of abuse (“Madman!” “Idiot!” “Japan is at peace!”) and gave up after only seven minutes. He retired to the general’s room, where he began his meticulously prepared ritual suicide. He plunged a short sword deeply into his abdomen and excruciatingly pulled it across his stomach before his attendant and probable lover Morita Masakatsu attempted to perform kaishaku, beheading Mishima with a long sword to end his agony.

Unfortunately, Morita’s swordsmanship was hopeless, and he repeatedly missed Mishima’s head, striking him agonizingly on the shoulders instead. Another of the cadets—an experienced kendō practitioner—then stepped in and expertly performed the kaishaku. Morita himself then performed ritual suicide and was in turn decapitated. When the police entered the room shortly afterwards, the heads of Mishima and Morita were resting side by side on the carpet.

News of the incident spread like wildfire across the mass media in waves of miscomprehension and misreports. Some people, when they heard the name “Mishima” constantly repeated on the radio and television, assumed that he had won the Nobel Prize for Literature. Instead, that evening’s edition of the Asahi Shimbun—the paper’s top-selling edition ever—carried a photograph of Mishima’s severed head.

An explosive outpouring of frantic analysis followed, offering diverse opinions: Mishima had died in the noblest of political protests. No, he had simply gone insane. The writer’s desire to die a heroic samurai death at the peak of his powers and to indulge his lifelong sadomasochistic impulses were also inevitably mentioned. 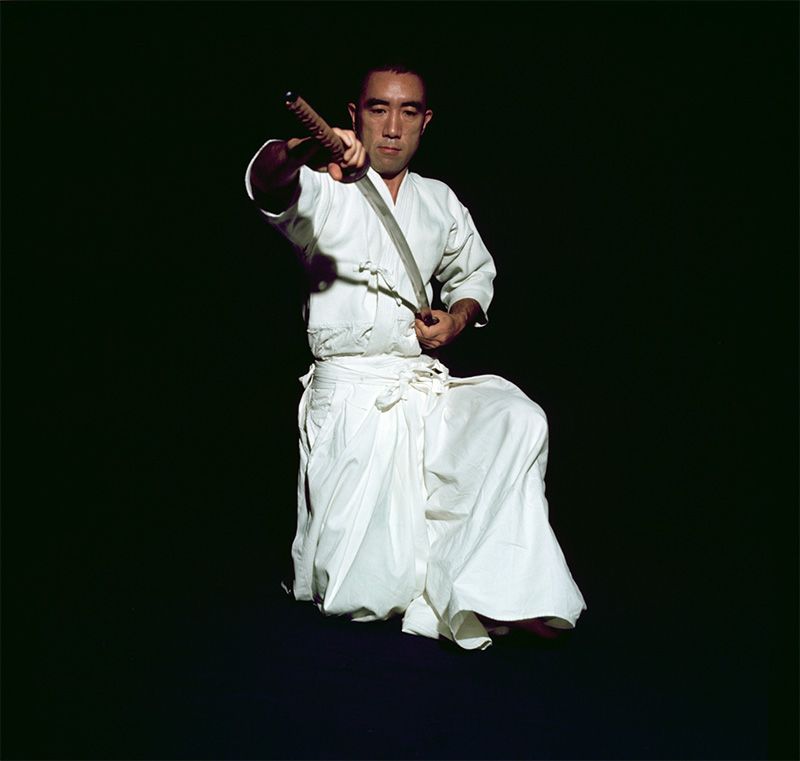 In his later years Mishima dove deeply into Japan’s military past and the samurai ethos underpinning it. (© Jiji)

The ostensible reasons for Mishima’s dramatic suicide—a demand for the legal recognition of the Japanese military and a reform of the American-imposed “Peace Constitution”—are today policy objectives of the conservative Abe Shinzō and his Liberal Democratic Party, which has just won an overwhelming electoral victory. Indeed, in a grim irony showing how things have come full circle, three years ago a protestor set himself on fire, objecting to just the constitutional reform Mishima was calling for.

Although he only became interested in the idea in the last years of his life, Mishima took constitutional reform seriously and set up a study group on Japan’s Constitution within the Shield Society. Yet many have seen his posturing on this issue as a charade to effect his own spectacular samurai-style death. Mishima had written in works like the 1969 Wakaki samurai no tame ni (For Young Samurai) of reviving samurai ideals in modern Japan and had died with a hachimaki band around his head proclaiming shichishō hōkoku, or “seven lives to give for the emperor.”

Whatever your perspective on the incident, the one thing that seemed clear was that it was a grim, terrifying moment of high tragedy. Mishima was known in life for his great sense of humor and his infectious laugh, but it seemed as if in this final event all humor deserted him. As the writer Yoshida Ken’ichi memorably said of Mishima, he might be laughing with his voice, but his eyes were always serious.

Looking for the Comedic Side

That is one way of understanding Mishima, but it is not the only one. In fact, it makes just as much sense to turn that equation around and see things the other way—whenever Mishima was staring at you in deadly seriousness, he was also laughing. Like Friedrich Nietzsche, a favorite author—Mishima’s mother left a copy of Nietzsche on her son’s altar so he could read him for all eternity—Mishima understood that the most profound ideas could not just be fused with comedy, but that comedy is intrinsic to the highest forms of philosophy, as it is to the human condition itself.

Where, then, was the comedy in the Mishima Incident? Actually, everywhere, if you knew where to look.

Mishima had a long-standing interest in ritual suicide, a subject he described in detail in his 1961 short story “Yūkoku” (Patriotism), which he turned into a film in 1965 with himself in the lead performing the suicide. In preparation for the Mishima Incident he read up on historical acts of seppuku. His editor at Shinchōsha, Kojima Chikako—for whom he was serializing his “life work,” the Sea of Fertility tetralogy—recalls how when she called to collect his monthly manuscript he would regale her with comic stories of seppuku that had gone bizarrely wrong.

There was the samurai who had started to insert a sword into his stomach, but had discovered it to be blunt and so decided to have it sharpened, putting off his death for another day. Or the samurai who had committed seppuku without kaishaku and had lain there for hours. When his body was discovered by junior samurai, they began talking about him, only for the seemingly dead corpse to bark out, “Don’t dare speak about me in that way!” This type of thing would send Mishima into hysterics.

Still, it’s hardly Oscar Wilde, is it? But in fact Wilde, along with the Japanese writer’s lifelong devotion to the Irish playwright who lived from 1854 to 1900, was a key part of the 1970 suicide. Mishima’s obsession with Wilde’s 1891 play Salomé—the story of the beheading of John the Baptist at the request of King Herod’s stepdaughter Salomé and its alluring depiction of sadomasochistic eroticism—positions the entire Mishima Incident in an entirely new light.

Mishima first encountered Oscar Wilde and his play Salomé, illustrated by Aubrey Beardsley for its 1894 English translation, in his preteen years. He would later recall the enormous impact it made on his imagination.

“I was probably eleven or twelve and saw an Iwanami pocketbook edition of Wilde’s Salomé. Beardsley’s illustrations intensely attracted me. Taking it home and reading it, I felt as though I had been struck by lightning . . . Evil had been unleashed; sensuality and beauty had been liberated; moralizing was nowhere to be seen.”

Later, Mishima had the opportunity of going to see Richard Strauss’s Salomé at the Metropolitan Opera House in New York when he made his first overseas trip to America in 1952.

As well as being an outstanding novelist and short story writer, Mishima was also a prolific dramatist, writing more than 80 pieces for the stage, in a variety of genres including Western plays as well as nō and kabuki works. He also adapted and directed plays and occasionally appeared in them himself in bit parts. Yet when in 1960 he realized his lifelong dream of putting Wilde’s Salomé on stage in Tokyo, he declared:

“It has been my dream for the last twenty years to direct Salomé. I would only be slightly exaggerating to say that I joined the theater just so I could direct Salomé one day.” 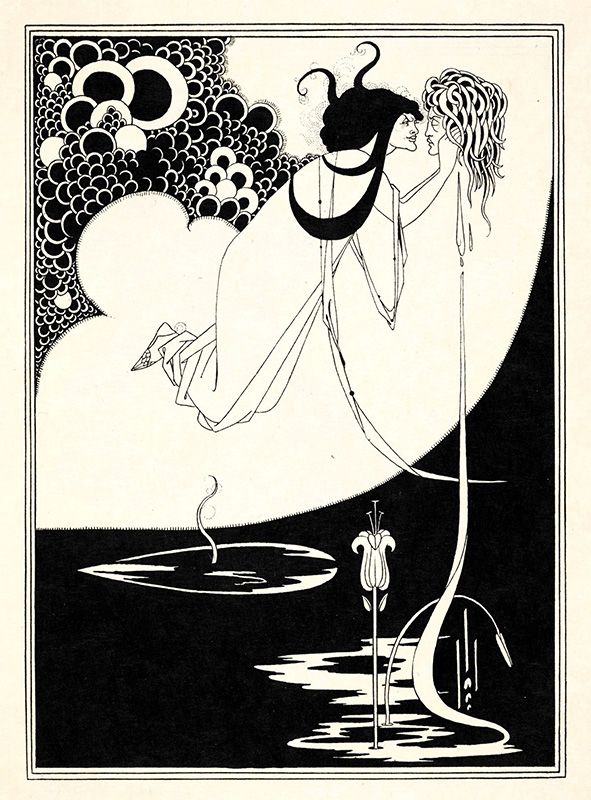 Wilde himself selected the young artist Aubrey Beardsley to create the images for his play’s first English-language edition.

Immediately before the Mishima Incident, he was preparing another production of Salomé to open in Tokyo in the spring of 1971. When on stage, only a few months after Mishima’s death, the severed head of John the Baptist was lifted up and kissed by Salomé, the audience could not fail to link its significance to the incident that had just rocked Japan.

The eyes were deadly serious, but the voice rang out in high laughter. It was a pattern throughout Mishima’s life that he wished to act out in person the arresting visual stimuli—from the Martyrdom of St. Sebastian to samurai seppuku deaths—that had beguiled his imagination as a child. But perhaps no image mattered more to him that the severed head of John the Baptist in Wilde’s Salomé.

Rather than seeing that shocking image of Mishima’s severed head on the carpet as the appalling conclusion to his call for constitutional reform or his desire to die like a samurai, we can view it as Mishima’s longstanding ultimate objective, the moment when he himself was transformed by the stroke of a lover’s blade into a real-life John the Baptist.

It’s not funny, most would say; it’s deeply disturbed. But this was Mishima’s ultimate joke on life and the power of imagination itself, profoundly informed by his love of Oscar Wilde. It was a comedic representation of the importance of being Mishima Yukio.