A Piece of Cake

A few years ago I began regularly crossing the country from my main residence in Yokohama to live part time in Nagasaki. Spending long stints in the historic Kyūshū city, once the center of Japan’s foreign trade, has rekindled my appreciation of its famed kasutera sponge cake. Widely recognized as a symbol of Nagasaki’s role as the gateway of Western culture, the Portuguese-inspired sweet, known as castella in English, remains a steady draw for tourists and a vital revenue source for the local economy.

Judging from the enthusiasm of visitors to Nagasaki from neighboring Asian countries, castella is hugely popular in the Sinosphere. Members of Chinese tour groups commonly return to passenger liners docked at the city’s port weighed down with paper bags from well-known castella makers. Foodies from Taiwan and Hong Kong, too, can frequently be found peppering staff at Iwanaga Baijuken, a castella shop established in 1830, with questions about ordering from overseas and whether the specialty eggs used in the sweet are for sale.

Castella have even crossed over to neighboring countries. In Taiwan a growing number of chain and specialist stores offer “Japanese-style” and home-grown versions, and Hong Kong also has a locally produced rendition. The cake is such a part of local food culture that when a Taiwanese friend received a Nagasaki-style castella a few months back as a gift she asked me to explain how it differed from the kind she had grown up eating.

I had to admit that I did not know for certain, but the addition of raw milk stood out when I perused the ingredients list of a Taiwanese castella she emailed me.

Castella traditionally contain no dairy products or baking powder whatsoever. Older shops in Nagasaki continue to make the sweet by hand the old-fashioned way with just eggs, flour, starch syrup (mizuame), and sugar. To create the spongy texture, cooks whip the eggs, flour, and fine sugar into a frothy batter, then add mizuame to give the cake its delightful stickiness. A coating of coarse sugar is sprinkled in the bottom of the rectangular baking pan prior to pouring in the mixture, giving a pleasing crunchiness to the finished dish.

Castella is not native to Japan, but has evolved over the centuries in accord with local tastes and can now safely be considered a Japanese sweet. Traditional versions remain popular, but like the ubiquitous manjū sweet bun, which has been shaped into countless versions since crossing over from China hundreds of years ago, castella is continually evolving. Creative confectioners are constantly creating new varieties featuring exotic flavors like chocolate, honey, matcha, and strawberry. Just the other day I even found a store in Nagasaki offering castella made with collagen powder aimed at beauty-conscious patrons. Nagasaki-style purists still insist, though, that a cake must be made in the tried-and-true fashion to be called a kasutera.

The Road to Wagashi

The predecessor of the castella, a dish called pão de ló, was introduced to Japan by Portuguese missionaries in the sixteenth century. While making their rounds the priests would offer the luxurious sponge cake as a gift to prospective converts and sick church members. The confection proved to be so popular that Japanese traveling to Portugal to study propagated the recipe after returning to Japan.

Several theories exist as to the name kasutera. According to one it derives from the Spanish region of Castile, while another suggests it comes from the tendency of Portuguese chefs to shout castelo (castle) as they vigorously beat eggs for pão de ló into stiff, citadel-like peaks. 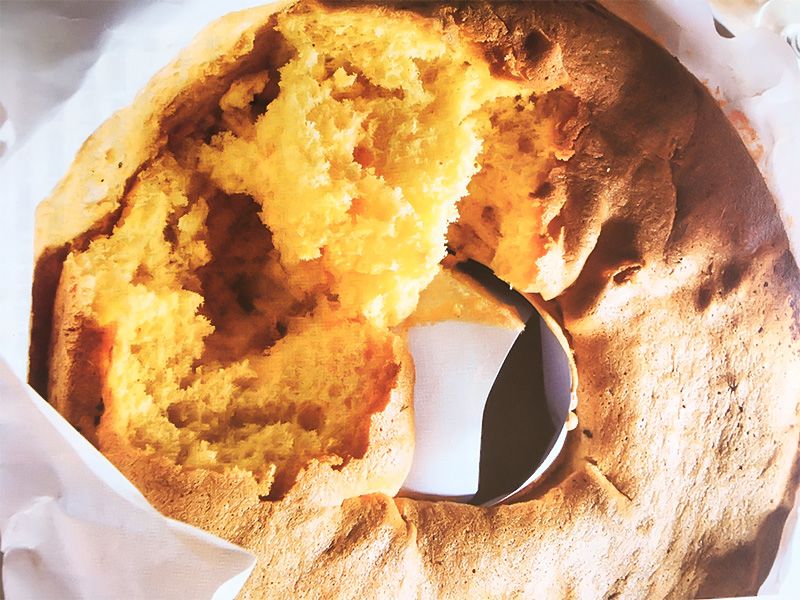 Pão de ló has a different shape and texture than its descendant, the Japanese castella.

Making castella was a demanding, labor-intensive process for early Japanese bakers. First ingredients had to be measured, mixed by hand into a foamy batter, and carefully poured into specially designed molds. Chefs then baked the cakes in make-shift ovens, small kiln-like structures heated with charcoal from above and below, while repeatedly prodding the mixture with a bamboo pick to keep air pockets from forming and to make sure it baked evenly.

Influenced by local tastes, later chefs introduced starch syrup to add a moist stickiness and coated the bottom of the pan with coarse sugar for a slight crunchiness contrasting the spongy texture of the cake. Creative developments like these gradually transformed the castella from a European edible into a Japanese sweet.

Shops like Fukusaya, a Nagasaki confectioner founded in 1624, continue to create castella in the traditional fashion. Each batch is made by a single baker who oversees each step in the process, from mixing ingredients to cooking.

When castella first reached Japanese shores, sugar was a luxury item imported mostly from China. From the early Edo period (1603–1868), though, the Dutch East India Company brought in greater quantities of the sweetener as demand rose, trading it for Japanese copper and silver. Initially carried as ballast aboard Dutch merchant ships, sugar eventually accounted for an estimated 30% of Dutch imports to Japan. Japanese developed such a sweet tooth that in 1759 an amazing 1,375 tons of sugar—an amount equivalent to a whopping ¥2.4 billion in today’s money—passed through the trading outpost on the island of Dejima in Nagasaki Bay. The Edo shogunate eventually ramped up domestic production and imposed high tariffs to offset its dependence on imported sugar, but it remained a lucrative product for Dutch traders.

Much of Japan’s imported sugar originated in Batavia, the capital of the Dutch East Indies in what is now Indonesia, and came to Nagasaki via Tainan in Taiwan, then a Dutch colony. From there it traveled across the country to markets in Osaka. Sugar consumption was highest in the Kansai area and the capital of Edo. A significant amount, though, remained in Nagasaki, becoming castella and also serving as a form of payment by Japanese and foreign merchants to courtesans in the brothels of the Maruyama district, who would trade the valuable commodity for silver. 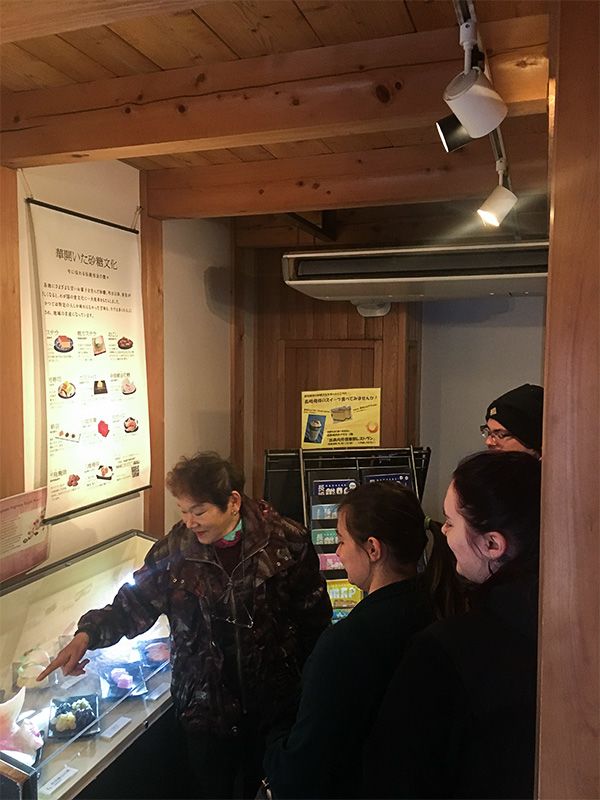 Visitors to the old Dutch trading outpost on Dejima look at an exhibit about the history of sugar in Japan.

Sugar inspired new varieties of sweets and also became a staple ingredient in Japanese cuisine. As a costly additive strongly associated with its port of origin, it inspired the reproachful phrase “Nagasaki must be far away,” aimed at cooks suspected of skimping on the sweetener.

During a trip to Portugal several years back I visited the historic bakery Fábrica de Pão de Ló de Margaride, once the purveyor to the Portuguese royal house, in the Porto district in northeast of the country. Established in 1730, the cake shop—now under the guidance of its seventh-generation head—continues to make pão de ló the traditional way. 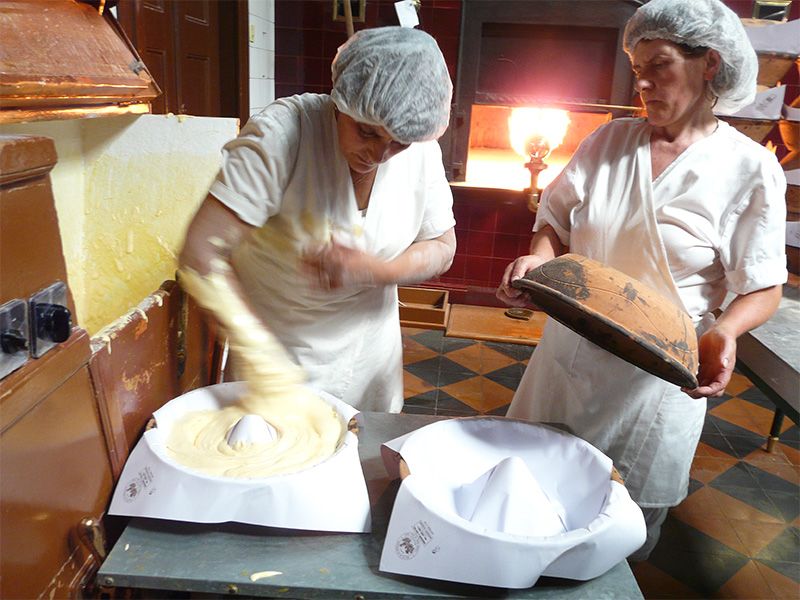 As might be expect of the precursor of the castella, the dish contains only eggs, sugar, and flour and is baked in an old-style oven. Taking a bite of the shop’s pão de ló my mouth filled with a wonderful egg aroma. The texture of the dish, though, was not moist like a castella but crumbly, something I attributed to a difference in the batter.

I had brought along a castella from Nagasaki as a gift. Anxious to learn how it would be received in the land of its ancestry, I nervously offered each of the kitchen staff a piece. Judging from their smiles and excited responses, they approved of what Japan had done to their native dish. This experience helped me appreciate castella’s long evolution from a European dish to a Japanese sweet.

Japanese innovation has not yet finished with the castella, though. As modern tastes change, lighter, spongier varieties with less sugar have emerged to challenge their richer predecessor. Whether an old-style Nagasaki kasutera or a new rendition, though, I hope that foreign visitors to Japan will try the sweet at least once during their trip.

Tourists often flock to outlets of well-known castella makers, such as those located inside department stores, but I recommend that visitors to Nagasaki also pick up bundles of cheap end pieces available at grocery stores and markets in the city. Perfect for snacking, they are as tasty as the fancy boxed version they are trimmed from. 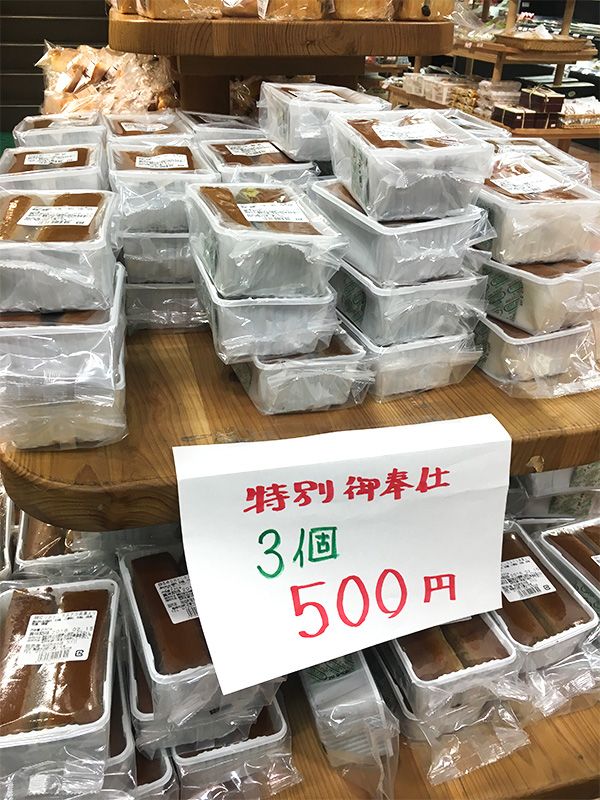 Castella can be a pricy gift item, but it’s also available for casual snacking. Three small cakes sell for just ¥500 in this affordable shop.

Older Nagasaki residents say the best way to enjoy kasutera is with a stiff cup of tea or a glass of milk. No matter what your preference, though, castella offers up a flavorful history of Nagasaki.