“Isle of Dogs”: A View from Japan

Wes Anderson’s new film Isle of Dogs is a stop-motion animation with canine heroes set in a near-future Japan. While the dog puppets speak English, the human characters speak Japanese—but their words go untranslated for American audiences. For those who do understand Japanese, however, the jumbling of two languages cooks up a delightful confusion.

The story takes place 20 years from now in the city of Megasaki, where dog flu is starting to proliferate among the canine population. Claiming that it could spread to the people of the city, Mayor Kobayashi issues a decree banishing all dogs to a waste disposal site known as Trash Island. As a first step, he sends the Kobayashi household bodyguard dog Spots into exile.

Some months later, on an island full of exiled dogs, a stray called Chief leads Rex, King, Boss, and Duke in a dominant pack. The main action begins as Atari, the mayor’s adopted ward, arrives in search of his beloved Spots.

Anderson lists Kurosawa Akira and Miyazaki Hayao among the Japanese filmmakers he respects. Mayor Kobayashi’s appearance in the film is modeled on the character played by Mifune Toshirō in Kurosawa’s High and Low (1963), down to his suit and hairstyle. Yet there is no part of the story that seems particularly influenced by the Japanese director. In the 2015 documentary Hitchcock/Truffaut, Anderson enthusiastically analyzes the pleasures of Alfred Hitchcock’s films. There is very little about his style, however, that recalls the Hitchcockian thriller. While Anderson appreciates and has taken hints from directors from around the world, he has an established approach and view of the world that makes it hard to detect any level of cinematic influence beyond homage.

For long-time followers of Anderson’s work, his citation of Miyazaki Hayao is surprising, or even puzzling. There is none of Anderson’s black humor in Miyazaki’s films and their brands of fantasy are entirely different. Miyazaki’s works transform familiar scenery into mysterious worlds through imaginary beings like Totoro or the Cat Bus. By contrast, in his animations Anderson tell stories of animals with distinctly human mannerisms amid intricate, artistic backdrops. Given their disparate styles, it is incongruous how prominent talk of Japanese directors’ influence has been in publicity for Isle of Dogs. 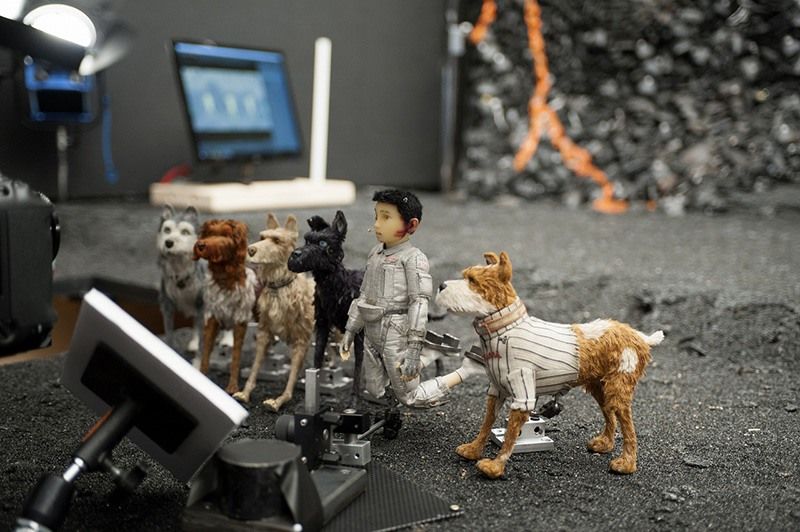 Creating the stop-motion animation used in Isle of Dogs is a time-consuming process requiring minute changes in the puppets’ positions between each shot. (© 2018 Twentieth Century Fox Film Corporation)

The film takes place on the imaginary waste island and in Megasaki, which reflects contemporary Japan despite the near-future setting. Iconic aspects of Japanese culture like sumō and taiko drums appear on screen, but it is the startlingly realistic reproduction of everyday aspects of street life, like boarding houses and ramen shops, that catches the eye. While there is some exaggeration to fit the animated style, it is never dishonest or inaccurate. By contrast, the island where the dogs are isolated is entirely fictional. The dogs are the main characters here, and they speak English and have English names, so there is little sense that this is a Japanese location.

Some have criticized Isle of Dogs as politically incorrect. The age now increasingly demands that creators consider other countries’ cultures and take care to avoid errors and disrespect. If they fail to do so, they can expect to have their errors pointed out on social media.

When setting a film in another country, it is probably impossible to achieve 100% approval along these lines. Given these circumstances, I think it is important for a filmmaker to thoroughly study that culture and take a careful and respectful stance, while at the same time having the courage to work freely and make imaginative leaps.

A good example is this year’s global blockbuster Black Panther. The Hollywood movie was set mainly in a fictional African country, and won plaudits for successfully fusing aspects of various localities and cultures across the continent with contemporary American culture. But even Black Panther was also criticized for featuring customs that are now obsolete. Both arguments have their merits, and I think there is no way of avoiding mixed reactions.

I did not personally think there were any PC issues with Isle of Dogs, but I felt there may have been some problems with the handling of language. The dogs are portrayed speaking English and they perceive the Japanese spoken by humans, which is not subtitled, as a foreign language. There has been criticism that the simple words of Japanese characters compared with the complex English conversation of the dogs leads to stereotyping. As there is a limit to how much subtitles or dubbing can do when two separate languages are flying back and forth, I think Anderson should have considered the difficulty of working outside his native language.

There may also be some Japanese viewers who feel uncomfortable with the idea of an American director using Japan as a setting for a story where sick dogs are forcibly isolated. However, if they see the careful depiction of Japanese culture present throughout, they will understand that the country is not being looked down on. The movie tells the tale of a hardened stray who learns to care again through meeting a boy who loves dogs. Above all, Anderson’s puppet world is thoroughly charming.

Both creators and viewers should be sensitive to political correctness. It is necessary to draw attention to prejudice as something for filmmakers to avoid. At the same time, if someone makes creative leaps based on a deep fascination for another country, misunderstanding and stubborn lack of acceptance of that person’s motivations are unsophisticated responses.

Written, produced, and directed by Wes Anderson. At the 2018 Berlin International Film Festival, Anderson won the Silver Bear for Best Director for his work on the film. The all-star cast includes Bryan Cranston, Bill Murray, Edward Norton, Scarlett Johansson, Greta Gerwig, Frances McDormand, and Ono Yōko. As well as co-writing and acting as a consultant on the Japanese language, Nomura Kun’ichi provided the voice of Mayor Kobayashi. The film opens in Japan on May 25, 2018.

(Originally published in Japanese on May 24, 2018. Banner photo: A scene from Isle of Dogs. © 2018 Twentieth Century Fox Film Corporation.)