Table Tennis Diplomacy that Brought the Koreas Together

Culture Jun 12, 2018
Ogimura Ichirō may have been short in stature, but he was a giant of sports diplomacy. A world table tennis champion more than 50 years ago, Ogimura’s experiences abroad shaped his worldview and contributed to his efforts to usher China back onto the world stage and bring together North and South Korean athletes to create their first-ever united team at international competitions.

Prior to the start of the 2018 World Team Table Tennis Championships this May in Sweden, players from Japan and Sweden played a friendly match to mark the 150th anniversary of diplomatic relations between the two countries. But the most important reason that players exchanged rallies may have been to honor the achievements of one Japanese man, Ogimura Ichirō. 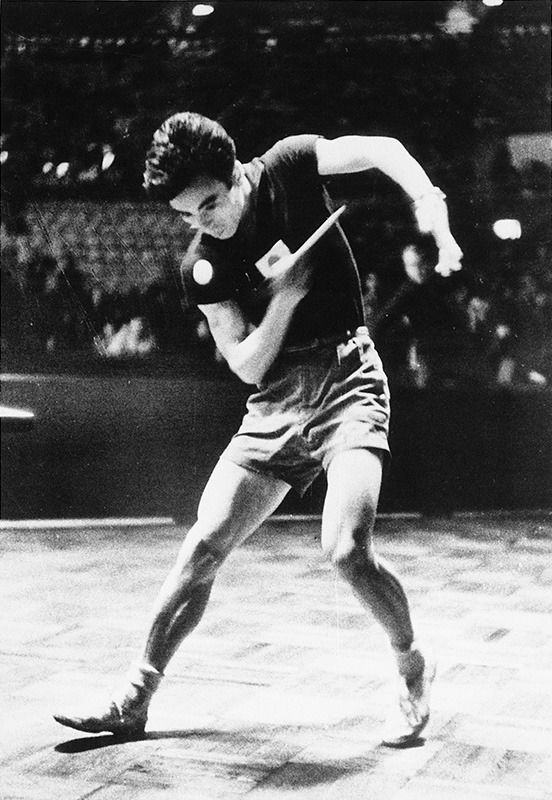 Ogimura was 21 when he took part in his first World Table Tennis Championships in 1954 at London’s Wembley Stadium, playing in both the individual and the team competitions. He went on to win a combined 12 individual and team titles. After retiring as an active player, he contributed his talents through coaching and became the third chairman of the International Table Tennis Federation in 1987. His outstanding knowledge and dynamism earned him the titles of “Mr. Table Tennis” and the “Ping-pong Diplomat.” He continued to travel the world for his sport until his death in December 1994 at the age of 62.

Why would someone like Ogimura from far-off Japan be remembered in Sweden? The answer is that this ace Japanese player was recruited by the Swedish Table Tennis Federation to help build up its players. Some voices within the Japan Table Tennis Federation had disapproved of Ogimura’s going to Sweden in December 1959, saying there was no need to share the skills Japan had built up over long years. But Ogimura retorted that if Sweden developed strong players, it would simply be up to Japan to work all the harder to best them.

The first team training sessions led by Ogimura took place in a small town on the outskirts of Stockholm. Over a dozen of Sweden’s best players had assembled, and just as Ogimura himself had been taught, he led the players in warm-up calisthenics before the start of play. The players started complaining that they were there to practice table tennis, not do calisthenics. Local newspapers also criticized Ogimura, saying that even though he might teach table tennis skills, there was no advantage to having him in Sweden. One by one, the players left, until only one remained, a 17-year old named Hans Alsér.

After spending six months touring table tennis clubs around the country, Ogimura returned to Japan. But the results of his coaching became evident when the baby-faced Alsér, who had faithfully stuck with Ogimura’s training regime, defeated several seasoned players and won the Swedish national championship in 1960. Soon after, Swedish players began clamoring to train under the Japanese coach.

Hearing this, Ogimura invited Swedish players to his training base, the Musashino Table Tennis Center in Kichijōji, Tokyo. Among them was Stellan Bengtsonn, who became the first Swedish player to win the men’s individual competition, at the World Table Tennis Championship in Nagoya in 1971. Two other outstanding Swedish players, Jörgen Persson and Jan-Ove Waldner, also trained with Ogimura, laying the foundations for Sweden’s excellence in the sport.

One wonders what was behind Ogimura’s determination to pass on his skills to players in other countries. 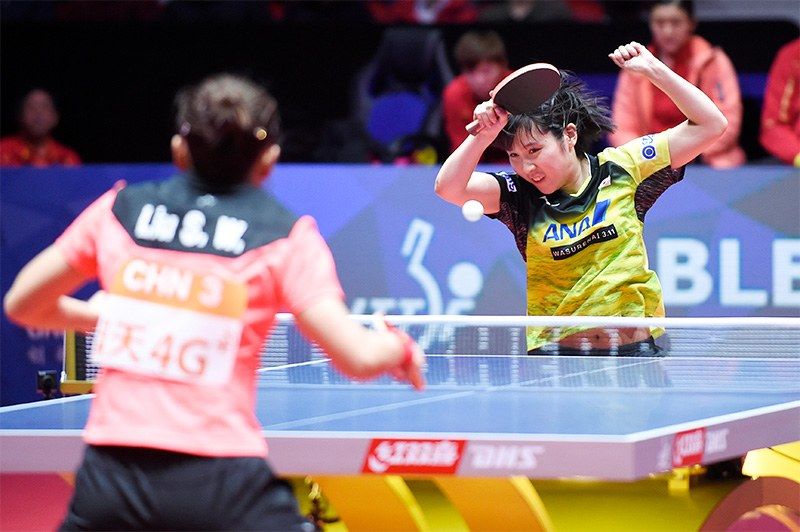 Sweden, a powerhouse in the sport thanks in part to Ogimura’s help, hosted this year’s World Team Table Tennis Championships. Japan’s Hirano Miu plays against her Chinese opponent at the April–May 2018 tournament. (© Chiba Itaru/Aflo)

Ogimura began playing table tennis as a high school student in April 1948, less than three years after Japan’s defeat in World War II. A scrawny youth, Ogimura was so taken with table tennis that classmates teased him, saying he had “fallen in love” with the sport. Not content just with practicing with fellow players at his school’s gym, Ogimura would continue practicing far into the night at the Musashino Table Tennis Center. Just five years later, he would become a world champion. 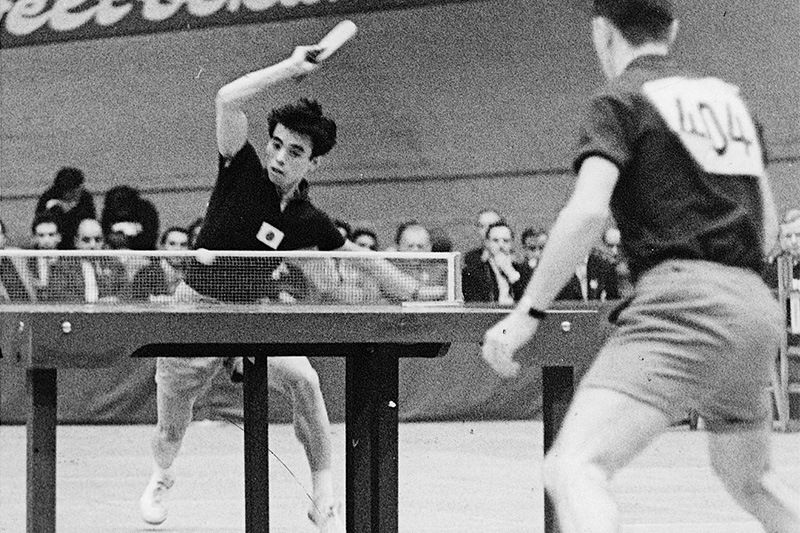 But on his first trip abroad representing Japan, in London in 1954, Ogimura would not experience pride in his country and joy at winning. Anti-Japanese sentiment was strong in Britain at the time, and Ogimura was greeted by a chorus of boos when he appeared on the court. He also experienced other indignities: during his warm-up sessions, the lights on the court were sometimes dimmed, and he was refused service at restaurants and barber shops. Although Ogimura returned to Japan with a champion’s trophy, he couldn’t help but relate his hurt and puzzlement to Uehara Hisae, the owner of the Musashino Table Tennis Center and a trusted supporter. “The level of dislike for Japanese that I experienced abroad was quite unexpected. I wonder why Japanese are so unpopular.”

It was this painful experience, in fact, that motivated the young Ogimura to turn his gaze to the broader world. This outlook most likely influenced his later achievements, as he came to believe that the small plastic ball, volleyed back and forth, had the power to overcome past conflicts and mistrust.

Even China, which has long dominated table tennis, is indebted to Ogimura.

“Great achievements in table tennis helped Japanese regain their confidence after their defeat in the war. We Chinese, with a similar physique, might also be able to succeed if we practice diligently. That’s why I’d like you, Ogimura-san, to use your skills and experience to tell the Chinese people about table tennis and what a great sport it is.”

So spoke Chinese premier Zhou Enlai to Ogimura in the spring of 1962. China was by then already an upcoming table tennis superpower, having won the men’s team championship at the World Table Tennis Championship in Beijing the previous year and breaking Japan’s six-time winning streak. But according to Zhuang Zedong, three-time world champion and a national hero in China, Ogimura’s technique and outlook were the best instruction that Chinese players could have hoped to profit from. 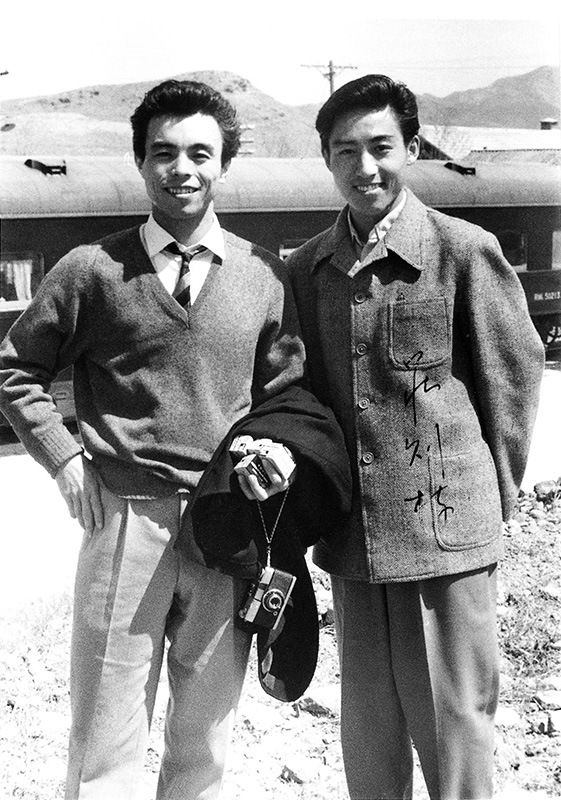 The close connection between Ogimura and China would produce unexpected results  following the World Table Tennis Championship in Nagoya, Aichi Prefecture, in 1971 (which would also see Stellan Bengtsonn, one of Ogimura’s star pupils, win a championship).

After 1967, China, shunned by the international community due to the excesses of the Cultural Revolution, had dropped out of the two preceding World Table Tennis Championships. However, Ogimura worked behind the scenes to arrange for China’s return to the international table tennis scene in Nagoya. By that time, Ogimura was no longer active in the Japan Table Tennis Association and was working for a trading company. Attending a trade fair in Guangzhou, he looked up table tennis contacts and reconnected with premier Zhou, urging him to send Chinese players to Nagoya.

When China did participate in Nagoya, Chinese player Zhuang Zedong and the American Glen Cowan struck up a friendship that contributed to US President Richard Nixon’s historic visit to China the following year, in February 1972, and to the resumption of diplomatic relations between Japan and China in September of the same year.

Ogimura Ichirō, the first Asian to head the international federation of a sport with its roots in Europe, devoted his strongest efforts to promoting unification of South Korea and North Korea, separated since the 1950–53 Korean War, through sports.

Asked why this issue was a priority with him, Ogimura answered that if the United States, Britain, and the Soviet Union had decided at their February 1945 summit in Yalta to carve Japan up into separate entities, he would have done all he could to reunite his own country.

Out of a belief that the 1991 world championships to be hosted by Japan in Chiba offered a perfect chance for promoting unification, Ogimura visited South Korea 20 times and traveled to North Korea 15 times to plead for a unified team from the Korean peninsula. When sports authorities from the North and South clashed over the location of training camps, Ogimura immediately got in touch with local government heads in Japan and proposed that Japan host joint training camps in three cities: Nagano, Nagaoka in Niigata Prefecture, and Chiba). He also brought the matter before the ITTF and, after securing agreement from the other countries, made it possible for the North and the South to compete under the unified name of “Korea.”

Addressing the team’s players, Ogimura announced that the team would be given every consideration up to the day before the tournament began, but that once the matches started, they would be treated no differently than any other athletes. In other words, Ogimura was telling the team about self-respect as competitors. In the end, the 1991 games saw the first ever unified Korea team defeat China, which was gunning for a ninth straight win in the women’s team championship, and emerge as world champions. The sight of the white flag depicting the Korean peninsula in blue rising along the center pole, and hearing the strains of “Arirang,” a folksong beloved by all Koreans, rather than the national anthem of the North or the South, was truly a highlight of Ogimura’s table tennis diplomacy. 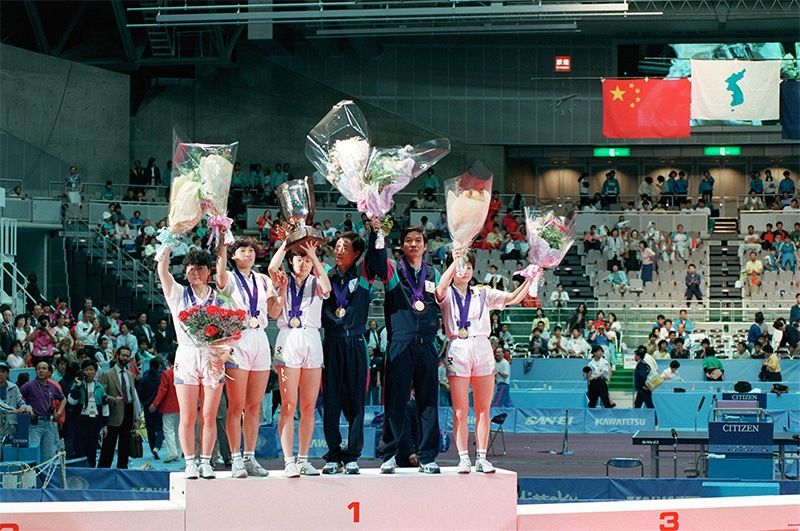 The unified Korea team beat the Chinese women’s team to win the team championship at the World Table Tennis Championship at Makuhari Messe, Chiba, in 1991. The white flag depicting the Korean peninsula in blue rises along the center pole. (© Jiji Press)

Fast-forward to 2018, when the women’s teams from the two Koreas, both having advanced to the quarterfinals, decided to compete as a unified team at this year’s Table Tennis Championships in Sweden. Although the Panmunjom Declaration of April 27, 2018 (just before the tournament kicked off on April 29), had indeed touched on fielding unified teams at international sports competitions, the ITTF’s hasty and unreasonable handling of the issue—allowing the unification of the teams in mid-tournament and effectively guaranteeing the Korean athletes at least a bronze medal—disregarded established competition rules and fell far short in fairness. It certainly gave the impression that politics prevailed over sports in this instance.

When asked about the relationship between sports and politics when the unified Korea team participated in the world championships in 1991, Ogimura replied that sports should be independent from politics, something that he firmly believed throughout his life. He held that while sports cannot influence politics, politics can help create a climate for compromise without bending the essence of sport. That is something that athletes can accomplish.

It is no coincidence that the name Ogimura Ichirō, so well known in Sweden, has given new impetus to reevaluating the relationship between sports and politics following another world tournament held in that land.