Japanese are extraordinarily curious to hear what foreigners think of their country. I have called Japan my home for the past 27 years, but even now when making new acquaintances I am almost invariably asked how I find Japanese life or if I enjoy living in Kyoto. At the same time, though, I have also found that people regardless of their background readily embrace outdated stereotypes of foreigners. For me this means that although I am Malian, I am seen first and foremost as African. As such, I am assumed to not speak Japanese, which I do, and that I find living in Japan alien and a constant struggle, which I do not.

Several years ago the Japan Association for African Studies, of which I am a member, held a symposium on the state of Japan-Africa relations. The aim of the event was to have African participants point out what they felt was wrong with the relationship. When it was my turn to speak, I felt compelled to confess my discomfort at the general premise of the symposium. I did not understand how we could in all seriousness talk about Japan’s relations with “Africa” as if it were a united whole and not a huge continent consisting of 54 sovereign nations. In my view, the focus needed to be on Japan’s relationship with each individual country.

I mention this to point out the discrepancy in Japan’s approach to Africa. On the one hand Japan is presumably interested in how it is perceived in different African nations, even as it takes a broad continental view with regard to relations. This inconsistency is largely due to a fundamental lack of understanding about Africa. For example, I often have people say to me in all honesty that they have visited countries like Morocco and Egypt but have not yet been to Africa.

Many in Japan seemingly think Africa is a single country that exists south of the Sahara Desert. I have long pondered why such an abstract idea persists despite Japanese visiting the continent in greater numbers. A major factor is the limited availability of reliable information. Material about Africa is often unobtainable, inaccurate, or simply does not reflect reality. The same is true about information that Africans have on Japan. Most Africans build their image of the country from information gleaned on-line or over the airwaves, but this rarely produces a well-balanced understanding of the country.

In April 2001, the US magazine Time ran a special edition titled “How the World Sees Japan” in which author Ian Buruma penned the thought-provoking cover article “Why Japan Cares What You Think.” In the piece Buruma makes an important point about Japan’s relations with less-developed countries.

"What do you think of Japan?” is the first question any Western celebrity arriving at Narita airport is required to answer . . . as though a mere glimpse of Narita's airport lounge would elicit any interesting thoughts at all. . . .

Why do Japanese care so much about what Westerners think of their country? I say Westerners, because the views of fellow Asians or Africans are not nearly as eagerly sought. Great media careers in Japan have been based on the so-called "blue-eyed view" of Japan, but never the “brown-eyed view.”

As Buruma points out, Japanese interest in Western assessments of its national achievements has long played the important role of affirming Japan’s position among the leading powers of the world. By looking to countries it saw as advanced, Japan found a model for reshaping its own society. Such attitudes linger on today so that even now, Japan does not put much stock in the way African nations view it, because they are in a region that is still struggling to modernize. In fact, their evaluations may only serve to illustrate just how far they trail Japan.

Communicating Outside the Box

When I tell Japanese about my research on residential environments in Mali they are often moved by the similarities to Japan’s past. For example, courtyards in Mali are traditionally multipurpose spaces, serving as kitchens and areas for family members to come together and eat. Recently, more families are living in apartment complexes and courtyards have come to be lively communal areas where residents interact. Many people have told me that such shared spaces were once also common in Japan, although most have been lost as communities developed. I am always impressed by the sense of nostalgia people feel at the resemblance. 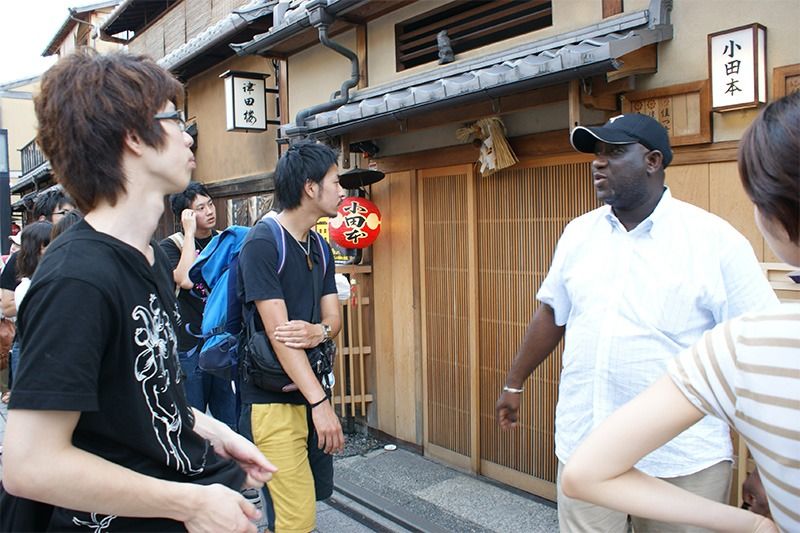 Sacko conducts field work with students for a class on Kyoto’s townhouses.

This illustrates the tendency in Japan to feel there is little to learn from the current state of African countries and instead focus on how things are dissimilar. Just as with the symposium I mentioned above, though, I want to avoid Japan emphasizing only differences based on the underlying notion that Africa is underdeveloped.

I often find when I give talks about Mali that I am expected to describe its unusual customs and emphasize how far behind Japan it is developmentally, as if it were a stand-in for all of Africa. I try to impress on people that Mali is an extremely complex country with 23 distinct ethnic groups. Disappointingly, though, my attempts to describe the diversity of Malian culture frequently fail to change people’s preconceptions. Following a presentation the moderator will regularly thank me for an interesting talk on Africa, not Mali, and then ask me to describe things like the eating and sleeping habits of Africans.

As the world becomes increasingly interconnected, Japan needs to move away from relying on antiquated perceptions of Africa and strive to build individual relations with countries on the continent. What African nations expect most from Japan is open and genuine relations.