History Culture Sep 12, 2018
In the last days of the Tokugawa shogunate, five samurai from the Chōshū domain secretly traveled to Britain. The knowledge and linguistic ability they acquired helped make them central figures in Japan’s modernization under the Meiji government.

Japan is now considered a highly developed country and one of the world’s economic powers. While it passed through several historical stages to reach this point, the modernization process after the Meiji Restoration of 1868 was crucial. How was it achieved? The small group known as the Chōshū Five played a key role in laying down the infrastructure that formed the foundations of a modern state.

Study Abroad in the Last Days of the Shogunate

On June 27, 1863, five samurai from the Chōshū domain (now Yamaguchi Prefecture) covertly left Japan by ship from Yokohama for Britain at a time when it was extremely difficult to travel overseas. Itō Hirobumi, Inoue Kaoru, Inoue Masaru, Endō Kinsuke, and Yamao Yōzō would go on to become leaders of politics and industry in Meiji Japan. The aim of their voyage was to study Western technology and thereby become “living instruments”—in the words of Inoue Kaoru—to effectively advance the jōi movement to expel foreigners, which was then championed by Chōshū, and prepare for international diplomacy.

The five began by learning English, visiting various facilities, and studying analytical chemistry at University College London. Itō and Inoue Kaoru cut their studies short after a few months, however, and went back to Japan when news came of the 1863–64 bombardments of Shimonoseki in Chōshū by the joint naval forces of foreign countries seeking control of the Shimonoseki Straits. The other three samurai remained to attend further scientific lectures, with Endō returning home at the start of 1866. Inoue Masaru received a diploma from University College and is thought to have made visits to inspect railways and mines. Yamao traveled to Glasgow, where he worked as an apprentice engineer in the shipyard by day and studied technology at Anderson’s College at night. Both went back to Japan, arriving at the start of 1869. 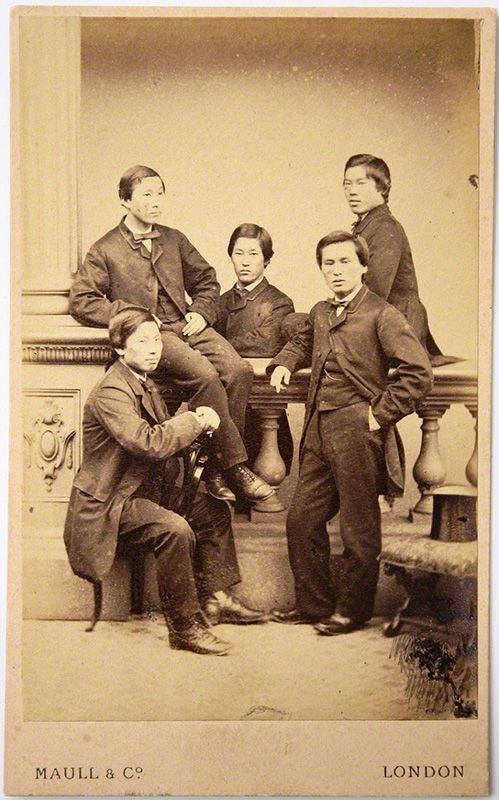 Itō Hirobumi and Inoue Kaoru: The World of Politics

After their British sojourn, Inoue Kaoru and Itō Hirobumi rose within the Chōshū political system. When the Meiji government was established, they put their overseas experience to work as bureaucrats on the front lines of diplomacy at the ports that had been opened to foreign trade. They later became high-ranking officials in the Ministry of Finance, which was responsible for modernization projects in addition to financial and civil administration. During this time, Itō overreached his position by making a suggestion about the replacement of domains by modern prefectures, for which he was heavily criticized and demoted. Both Itō and Inoue offered to resign over the issue of centralization of power, but their valuable experience in Britain served to protect them. Ultimately, Inoue’s active efforts contributed to the successful switch to prefectures and a centralized system of government on August 29, 1871.

Inoue rose to the position of vice-minister of finance, introduced annual budgets for ministries, and established the groundwork for the present budgetary system of making decisions based on revenue assessments. Although he resigned in May 1873, he returned to government some years later, following another trip overseas from June 1876. He became a councillor in July 1878, a position in which he was involved in government decisions. Itō, meanwhile, began the first of two foreign study periods in late 1870. After honing his political skills, he climbed to the position of councillor in October 1873.

Although they were not consistently successful, both men advanced within the Meiji government not only due to their roots in Chōshū—one of the leading forces in the new administration—but also through applying what they learned overseas and their knowledge of policy. They later became important politicians; Inoue was Japan’s first minister of foreign affairs and also served as home minister. Itō went on to establish the cabinet system and become the country’s first prime minister. He played a major role in the introduction of a number of political and administrative innovations that continue to this day through his involvement in the enactment of the Meiji Constitution and the creation of the national assembly in 1890. 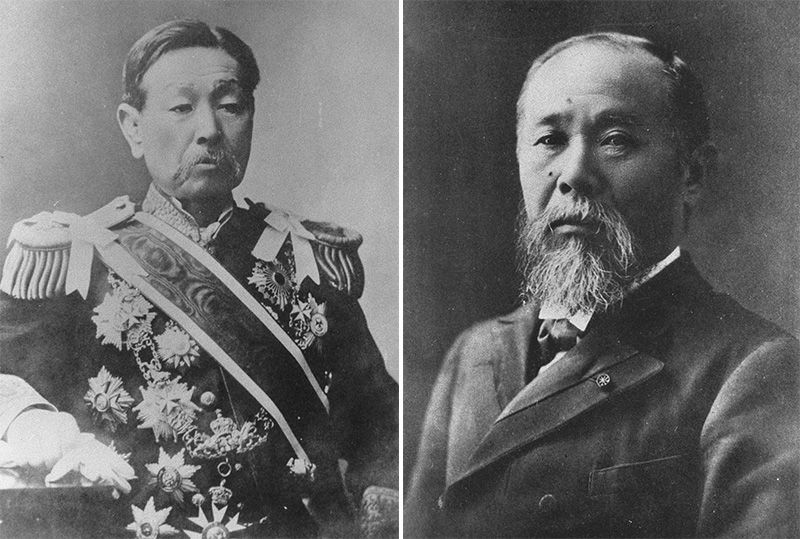 Following his return to Chōshū, Yamao Yōzō joined the Meiji’s government’s ministry of popular affairs in 1870, where he began by taking charge of the Yokosuka shipyard. However, the ministry's energetic promotion of modernization work drew criticism at a time when funds were limited, and soon became a political issue. Yamao sought to put a distance from this political strife, proposing the establishment of a ministry of industry that could independently focus on modernization projects. He successfully pushed through to completion this idea of a central office for overseeing government projects in such areas as rail, mining, lighthouses, telegraphy, and shipbuilding. 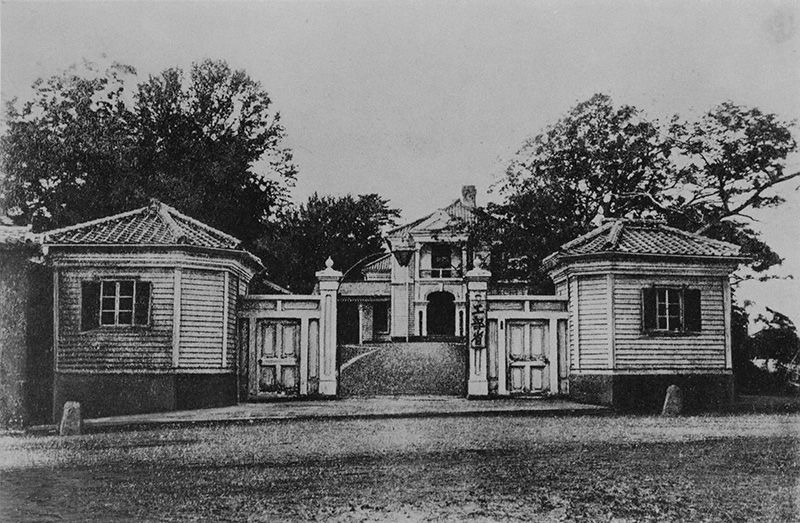 The front of the ministry of industry building. (Courtesy of the Postal Museum Japan)

Yamao effectively became the central figure in the new ministry, devoting himself to pushing forward various modernization efforts. As the new government was still establishing systems and practices, he was able to get away with actions like refusing to spend time in his ministry office and ignoring orders when making policy decisions and securing funds. He contributed to the inception of basic transport and communications infrastructure in Japan, such as the first train service between Tokyo and Yokohama in 1872 and the connection by telegraph of Tokyo and Nagasaki in 1873. At the same time, he strove to establish organizational structures and to provide opportunities and training to talented workers. He particularly focused on the development of engineers, founding the Imperial College of Engineering (now the Faculty of Engineering at the University of Tokyo). He thus made considerable contributions, both as a member of government and in the private sector, in this field of education.

Yamao rose to lead the ministry before he left in October 1881. He later filled other positions, such as heading the legislative bureau, but never matched the achievements of his time at the ministry of industry. By this stage, the government was not so actively involved in modernization projects.

After Inoue Masaru got back to Chōshū, he was given responsibility under the Meiji government for the Japan Mint and mining operations in 1869. In both organizations, foreign advisors were leading modernization efforts and he was picked for his likely ability to work together with them. In the first half of the Meiji period (1868–1912), the government hired many Western specialists at its ministries and educational institutions to aid in Japan’s assimilation of the latest technologies and systems. In 1871, Inoue took charge of the railway division within the ministry of industry, which was also dependent on foreign experts. His linguistic ability and scientific knowledge spurred on cooperation and the nascent rail industry made great strides. After Tokyo and Yokohama were connected in 1872, a link between Osaka and Kobe followed in 1874, and Osaka–Kyoto service kicked off in 1877.

“Shiodome yori Yokohama made tetsudō kaigyō o-norizome shonin hairei no zu” (Crowds Gather to Admire the First Passengers on the First Rail Service from Shiodome to Yokohama). This woodblock print commemorates the first train journey between Shinbashi, Tokyo, and Yokohama in 1872. (Courtesy of the Museum of Logistics) 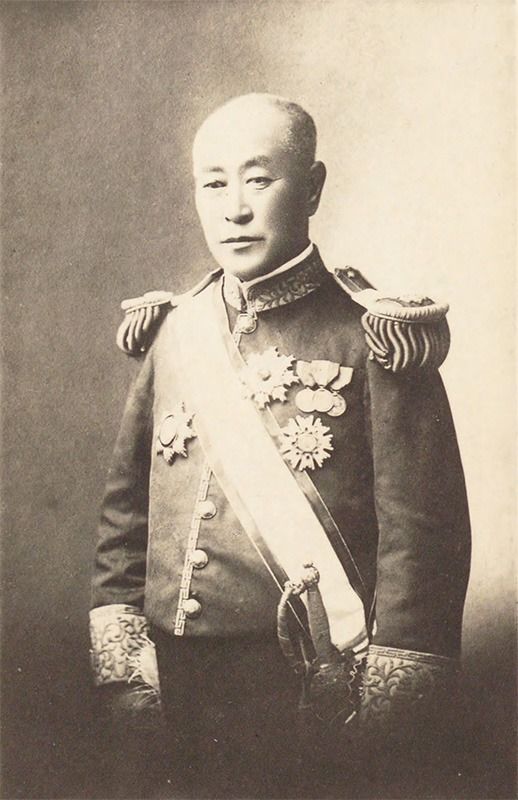 Inoue hired workers with experience of foreign study and trained engineers internally to achieve technological independence for the rail industry. As a result, the number of highly paid Western experts dropped, and the technocrats whose only ability was to communicate with them no longer had a role. Later, the next generation joined up from the Imperial College of Engineering and the Faculty of Science at the University of Tokyo. They supported the further expansion of the rail network: The Tōkaidō Line from Shinbashi in Tokyo to Kobe was completed in 1889 and the Shin’etsu Line between Takasaki and Naoetsu on the Japan Sea coast in 1893. This required the adoption of such technologies as bridge construction over major rivers and rack-rail sections in mountainous areas.

Eventually, however, Inoue and the other early technocrats became the old guard. Inoue retired in March 1893. In the early Meiji period, he was a big player, able to use his knowledge to push through policy, but the development of modern politics and administration left him behind the times. Following his departure, the rail network continued its smooth expansion.

Endō Kinsuke was not immediately able to make a major contribution after his return to Chōshū from Britain. In early 1868, however, under the new government he headed the forerunner to the customs house in Hyōgo Prefecture. Later he became a senior official in a group managing logistics and trade. Both jobs were based in free ports with many foreign merchants, and so were suited to Endō, due to his English ability.

In 1870 he moved to a management role at the Japan Mint, which started operations in April of the following year. With imported Western machinery, Endō—effectively a technocrat—worked with the guidance of foreign experts to produce a modern currency.

At the same time, the relationship between the foreign specialists and Japanese officials was not always well defined, which made life hard for Endō. In August 1874, before he left the mint he terminated the contracts of many of the Western advisors. They were no longer so necessary, as Japanese engineers had quickly mastered the processes involved. After this, the Japanese workers took on most of the mint responsibilities. Endō returned as head of the Japan Mint in November 1881. As with the government railway service, a new generation of graduates joined the mint from Imperial College of Engineering and the Faculty of Science at the University of Tokyo. Endō retired in June 1893, a pioneer in the creation of Japan’s modern currency.

The Chōshū Five and Japan’s Modernization

The members of the Chōshū Five applied their various talents to support the Meiji government in its task of building a modern state. They were involved in introducing such essentials as a rail network, a mint, bodies for training engineers, the budget system, the cabinet, and the first Constitution, making the most of their overseas experience and the understanding of policy that came from it. Where necessary, in technological fields, they switched naturally from working with foreign advisors to Japanese engineers who had studied overseas to those who had completed their education domestically.

There are many reasons for Japan’s modernization after the Meiji Restoration. Yet the existence of talented men like the Chōshū Five, who devoted themselves to their duties in different parts of the government, must be a leading factor.

From elsewhere in the world, this may seem like nothing more than the story of an island country in East Asia. It can be instructive, however, in reconsidering the modernization of one’s own nation. It is also important not to forget the achievements of the advisors from various Western countries. The more actively they passed on knowledge of technology to Japanese students the greater the chance of them losing their positions as surplus to requirements. Nonetheless, their efforts helped Japan to modernize—a contribution that remains highly thought-provoking in today’s society.

(Originally published in Japanese on September 4, 2018. Banner photo: The Chōshū Five. Courtesy of the Hagi Museum.)