The Ban’ei Horse Races of Hokkaidō

The Tokachi Plain in southeastern Hokkaidō is agricultural country, a vast area of dairy farms and fields of wheat, potatoes, and soybeans. When the early farmers cultivated the land here they relied on powerful draft horses known as Ban’ei horses that were treated as part of the family. In 1946, the first Ban’ei races were held. The tradition, a test of strength and stamina in which the horses pull heavy sleds, has fostered a horseracing culture in the Tokachi region—especially in the city of Obihiro, the only place that still hosts the races—that is very different from thoroughbred horse races, where speed is the deciding factor. In recognition of the event’s place in Hokkaidō history, Ban’ei horseracing was designated a Hokkaidō Heritage by the prefecture in 2004.

Ban’ei race horses are large animals weighing between 800 and 1,200 kilograms, often referred to as banba horses. They are very different from fast thoroughbred horses weighing only half as much at 400 to 500 kilograms and nothing like the small dosanko horses native to Hokkaidō. The first banba horses were imported into Japan to meet demand among early Hokkaidō farmers for strong, sturdy horses.

Banba horses trace their origins to the Percheron breed of northwestern France, the Breton horses of the Brittany peninsula in France, and a Belgian breed originally from Belgium and crossbred in the United States. The banba horses of today are crossbred descendants of these imported breeds and now considered a unique Japanese breed in their own right.

A Test of Real Horsepower

The race course at Ban’ei Tokachi in Obihiro is a straight 200-meter track with two obstacles along the way: a gradual 1-meter high rise and a steeper, 1.6-meter slope. The Ban’ei horses pull 450-kilogram iron sleds bearing additional weights as they make their way to the goal. The track holds 11 races per day, from 2:00 in the afternoon to after 8:00 pm at night. There were 568 registered horses with 20 registered jockeys as of August 31, 2018.

The jockeys ride on the sleds, guiding their horses with thick, heavy reins. (Some may be concerned that the horses are whipped, but the jockeys do not use whips. Instead, they use the ends of the reins to urge their horses forward, says Obihiro Racecourse PR Director Tokuda Naoko.) The sleds are weighed down according to the age of the horse, with 2-year-olds pulling the lightest sleds and older horses the heaviest. The heaviest sled weighs in at one ton and is only used in the last race of the season, the Ban’ei Kinen.

Jockeys will often pace their horses, stopping them to rest between the two obstacle slopes as part of their strategy. Unlike thoroughbred horseracing, where horses can win by a nose, the Ban’ei races require the horses to pull their sleds completely across the finish line, a unique rule in global horseracing traditions. The Ban’ei races are an integral part of Hokkaidō’s early history and the powerful horses are an impressive sight as they strain to reach the finish line.

The spectator stands set up along the length of the race track offer exciting, close-up views of the horses as they stop and start on their way to the finish line. Spectators shout words of encouragement as the horses struggle to climb the obstacle slopes. Horsepower has always been an important requirement for these sturdy work horses, and it is strength, not speed, that is the deciding factor in these races. 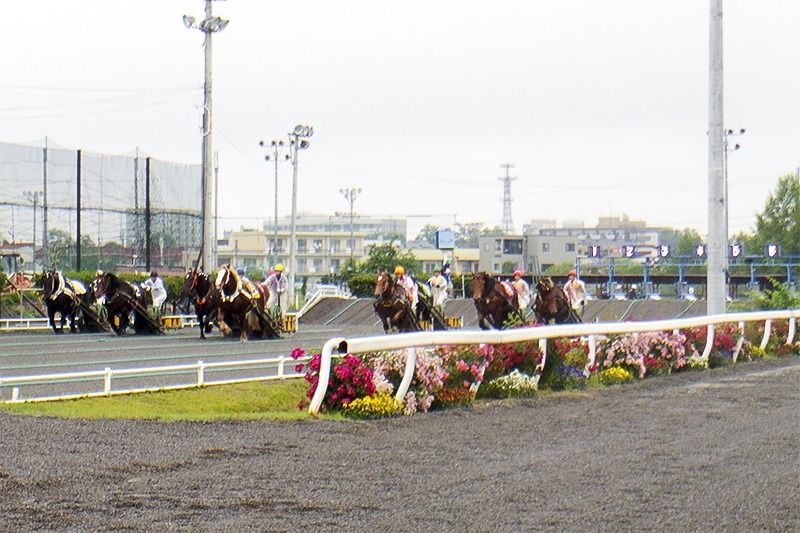 At the starting line. 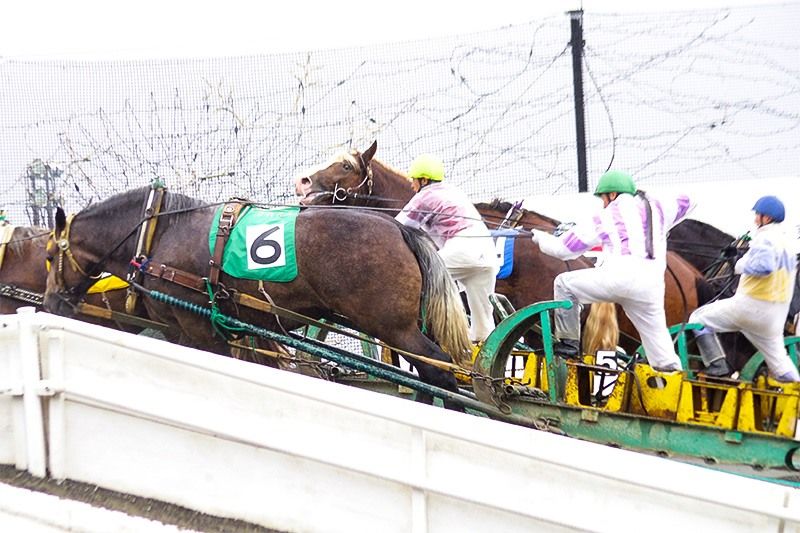 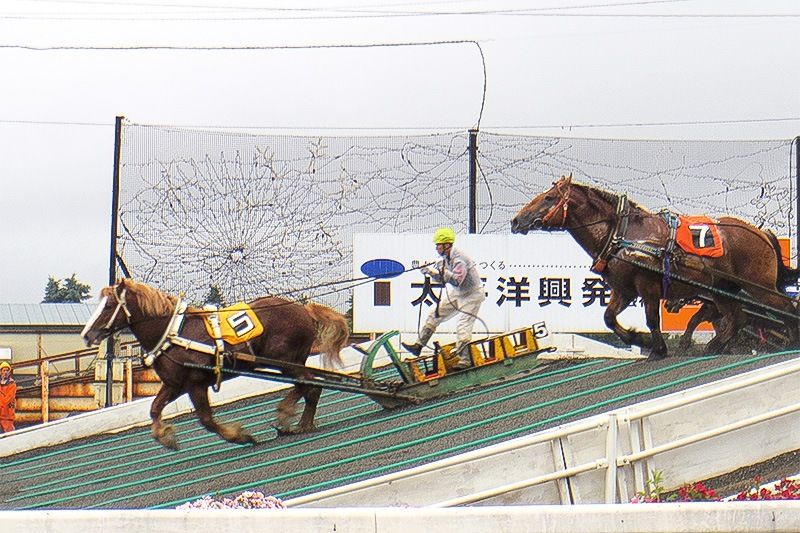 There is no final spurt in this race of power.

Reviving from a Precarious Past

The first Ban’ei races took place in the four regional cities of Obihiro, Asahikawa, Kitami, and Iwamizawa in 1953. Betting ticket sales exceeded ¥20 billion in fiscal 1977. By fiscal 1991, at the end of Japan’s economic bubble years, sales were up to ¥32.2 billion, and the annual number of spectators at the races was 840,000. These figures soon dropped, however, as the Japanese economy began to stagnate, and it was not long before the racetracks were operating in the red. In 2006, the cities of Asahikawa, Kitami and Iwamizawa closed their Ban’ei racecourses.

Obihiro, however, persevered, and with the support of Ban’ei horseracing fans throughout the country and corporate sponsors, moved in 2007 to revive the races. The city of Obihiro has a number of tourist attractions, prominent among them the confections produced by a local company, the Rokkatei Confectionary Company, but visitors are certain to find a side trip to the racetrack well worthwhile.

In March 2012, Mayor Yonezawa Norihisa of Obihiro declared that the Ban’ei horse races, with their strong following of fans, were an important cultural heritage of Hokkaidō’s history of development and a vital asset in the revitalization of the region, and that he would ensure that the unique races continued.

The Ban’ei races were given new life with donations from Rakuten, Softbank and other leading corporate groups.

Since 2007, when it became the only city holding the races, Obihiro has been carrying out major PR campaigns focused on local events. The local Ban’ei Tokachi racecourse offers a beginner’s betting booth for visitors unfamiliar with racetrack betting procedures, as well as backyard tours on race days. For those who do not participate in the betting on races, there are regular events held within the racecourse grounds, as well as a petting zoo where visitors can observe the horses up close.

Races are generally held on Saturdays, Sundays, and Mondays. A road-heating system keeps the race track clear even in the winter months, and races are held regularly, except in cases of heavy rain. In June 2007, lights were installed for night races, and an online betting system now allows fans to place their bets from home.

Thanks to these efforts to promote the races, sales for the 2012 fiscal year were ¥10.4 billion, the first year-on-year climb since Obihiro started to hold the races on its own. Sales have continued to expand with the introduction of online betting, climbing to roughly ¥21.9 billion in fiscal 2017, a 36.1% increase over the preceding year and setting a new record for the fourth consecutive year. 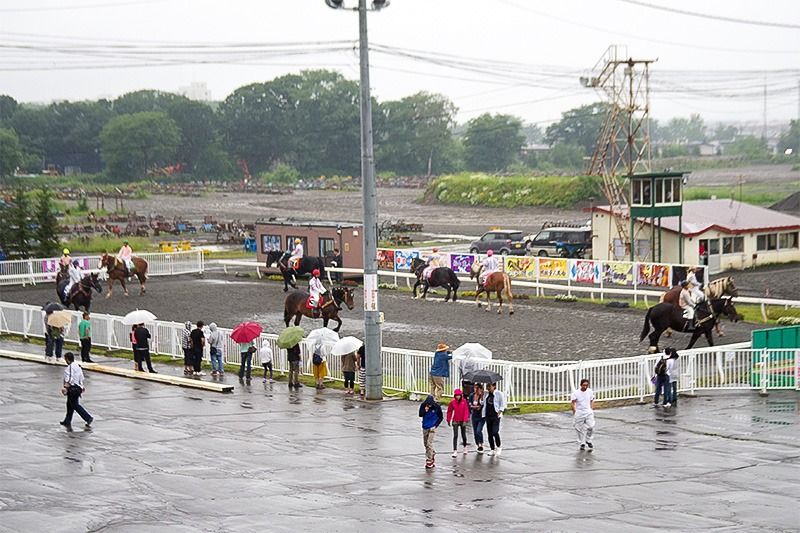 A paddock in the rain.

The grand prix of the Ban’ei races is the Ban’ei Kinen race of 4-year-old and older horses. This fiscal year the big race will take place on Sunday, March 24, 2019. Started in 1968, this is the only race in which one-ton sleds are used. The grand prize, which had at one time dropped to ¥3 million, has been steadily increased as the races flourish, and in fiscal 2017 was back up to ¥10 million. The grand prize for this year will be the same amount.

Today the sturdy banba horses are no longer used to plow fields or haul logs and coal. The Ban’ei races are now the only place where one can experience the history and culture represented by these fine creatures.

(Originally published in Japanese on September 12, 2018. Banner photo: The Ban’ei Horse Races at the Obihiro Racecourse on April 20, 2018. © Jiji. Other photos by Nagasawa Takaaki.)