Zombies in Japanese Entertainment: No Stopping the Undead Spread

The new zombie comedy Kamera o tomeru na (One Cut of the Dead) has inexorable momentum. The low-budget hit, directed by Ueda Shin’ichirō, opened in just two theaters in June 2018, but by September it was screening in more than 300 across Japan, according to listings on its official website. From the mix of small venues and cinema complexes, the film’s inherent entertainment value has clearly fueled the expansion. 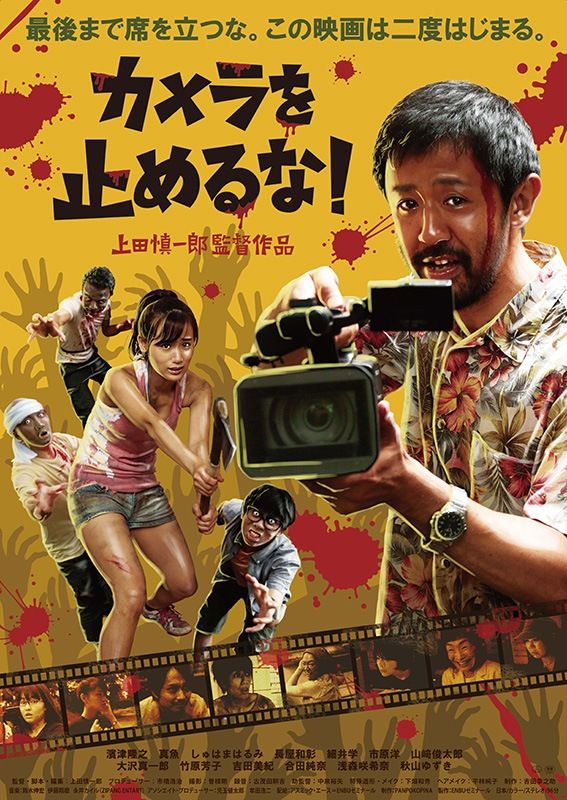 Poster for Kamera o tomeru na (One Cut of the Dead). (© Enbu Seminar)

One Cut of the Dead is about the actors and crew of a zombie movie shooting in a remote location; the first 37 minutes present a complete episode of zombie mayhem in a single cut. As depicted in the story itself, many Japanese zombie flicks are made on a low budget, so it is an appealing genre for independent filmmakers.

Every year, the Osaka theme park Universal Studios Japan holds Halloween Horror Night events. During set periods, zombies lumber around the park. Here too, minimal outlay is required, as there is no need to build any special facilities. With only a cast of actors and the makeup to produce the perfect decaying look, it is easy to transform the space from its familiar atmosphere to one befitting the spooky season. Halloween events have boomed in popularity in Japan over the past several years, and the sight of zombies lurching through the city streets around the end of October has become ever more common.

As the government talks about boosting tourism and revitalizing regional areas, the living dead have their part to play. For example, Hiroshima holds its Yokogawa Zombie Night in one of its traditional shopping districts in the Halloween season. A “zombie contagion facility” is opened outside Yokogawa Station where people can pay to undergo a gory makeover. The event, aimed at resuscitating the local economy, will be held this year on October 26 and 27.

Zombies have their roots in the Haitian voodoo religion, half a world away. How did they become popular in Japan? Here is a short history.

The undead creatures are said to have made their big screen debut in the 1932 US film White Zombie. These were not the now familiar flesh-eating zombies, however, but corpses reanimated for use as laborers, based on the original voodoo conception.

George A. Romero radically changed zombies’ popular image in his 1968 film Night of the Living Dead. The first work of the “father of zombie movies” did not receive a Japanese release, though, and it was not until his Dawn of the Dead reached Japan in 1979 that the shuffling hordes became widely known among the country’s horror enthusiasts. Battles between human survivors and zombies gathered in a shopping mall left an indelible impression, creating many new fans of the genre.

Night of the Living Dead was inspired by Richard Matheson’s 1954 novel I Am Legend. In 1978, manga artist Fujiko F. Fujio—best known as the creator of Doraemon—announced a new work, Ryūketsuki (Bloodshed Beast), based on the novel. Although ostensibly about vampires, it was one of the first Japanese works to take up the theme of a clash of values—one regularly depicted in recent zombie movies that I discuss below.

Later artists were influenced by zombie culture in a range of works. One of these is Araki Hirohiko, the creator of the ongoing manga series JoJo's Bizarre Adventure, who learned a lot from Dawn of the Dead. Certainly, the first part of his series is very much like a splatter movie, with its vampires and zombies.

Zombies have also colonized other forms of entertainment, notably in the enduringly popular and influential music video promoting Michael Jackson’s Thriller. A cosplay event at the USJ theme park re-creates the iconic dance with thousands of participants. J-Pop star Kyary Pamyu Pamyu adapts it in the dance for her Halloween-themed song “Crazy Party Night (Pumpkins Strike Back).” There is even a kabuki play called Ōedo Living Dead featuring zombies in old Edo, the former name for Tokyo. 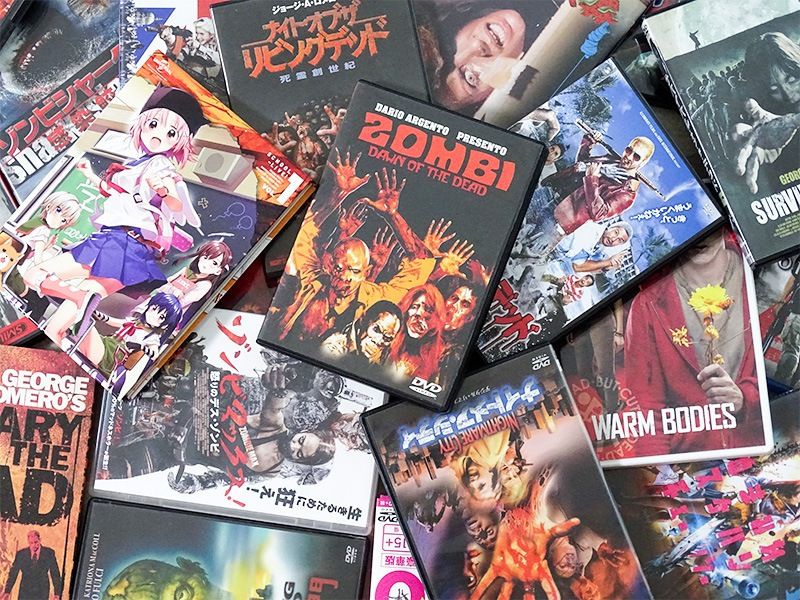 Zombie films steadily grew in popularity until the 1980s. A relative slump in the 1990s was followed by an unprecedented boom in the 2000s that continues to this day. One factor in the extraordinary spawning of titles was the release of the first in the Biohazard (marketed as Resident Evil overseas) video game series by Japanese company Capcom in 1996. The Capcom website shows that three of its five best-selling games are entries in this series. Dawn of the Dead was a big influence, and George A. Romero himself directed a commercial for Resident Evil 2.

A 2002 Hollywood adaptation was also a big hit, and subsequent entries in the series successively ramped up the scale. The sixth and final part was released in Japan in 2017. It is rare for zombie films to appear on Japanese terrestrial television, but the Resident Evil movies have been shown many times, attracting large audiences.

Around the same time, speedy zombies seen in the British film 28 Days Later and the American reboot of Dawn of the Dead gave the genre fresh bite. The standard image of lumbering undead creatures had made it difficult to portray fast action scenes.

Yet, was that the only reason for making zombies quick on their feet? There may be another explanation for the acceptance of the change among many creators and fans. I want to consider this from the perspective of the social background of recent years.

Japan’s efforts to increase tourism, mentioned above, are particularly focused on bringing in visitors from overseas. While tourism offers opportunities to interact with people from other backgrounds, it can also easily lead to friction. This is only natural when different cultures come into contact. The hate speech and prejudice seen in Japan and around the world in recent years are examples of attacks against people and values outside the mainstream that are becoming a social issue. As different values are expressed in society—by the minority and the majority, the big cities and the less populated regions, and people of different races and sexual orientations—antagonism and efforts to exclude are also growing.

Zombies could be seen as a metaphor for the invading values of the “other,” spreading their contagion through the population. If so, the connotation of their increased pace becomes apparent. It represents the speed at which values can be transmitted today.

This makes one think of the Internet. In Japan, the number of Internet users increased steadily from the 1990s into the 2000s. 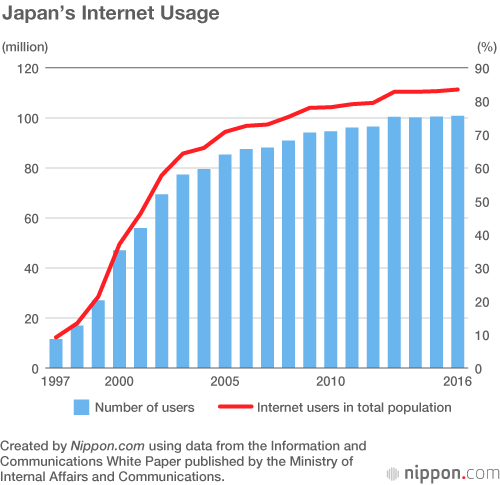 A particular world outlook can spread online at extraordinary velocity. One classic example is homegrown terrorism. There is the fear that a friend may suddenly drop out of contact, having succumbed to the infection of ideas—and that the next person to be carried away may be oneself. This is the same kind of fear as with zombies. 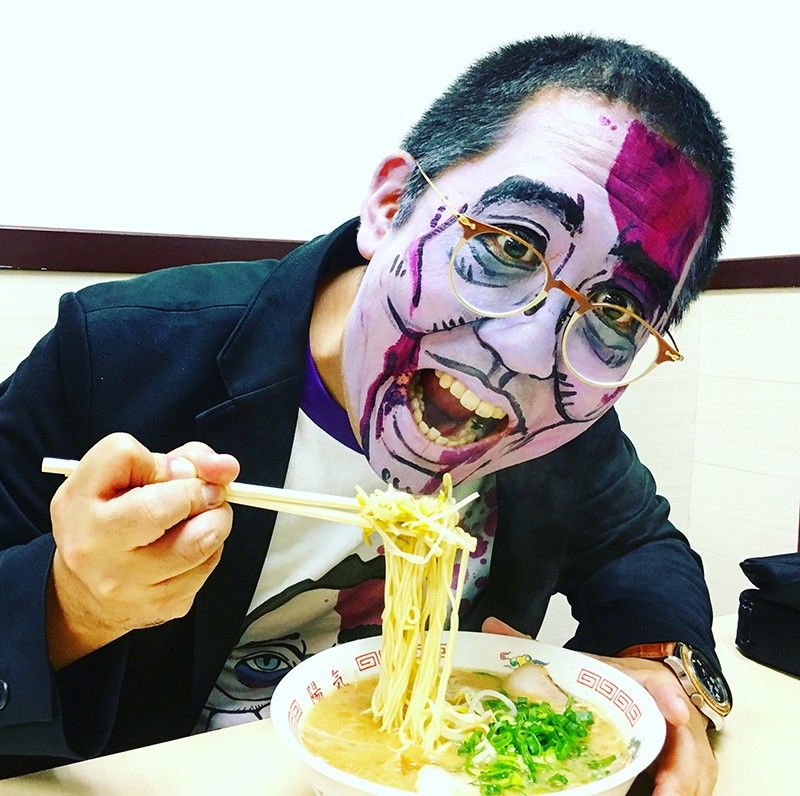 The writer eating ramen while wearing zombie makeup as part of Yokogawa Zombie Night in October 2017.

Monsters sharing some of the same characteristics as zombies have also been appearing in popular entertainment like Attack on Titan, Tokyo Ghoul, and Ajin. The creatures in them all resemble humans, but are entirely different in nature. In Attack on Titan, there are giants that eat humans, while the ghouls of Tokyo Ghoul only eat human flesh. The titular ajin are immortals that look like humans. All three of the well-received franchises have produced manga, anime, and live-action films.

All depict opposition and cooperation between humans and nonhumans. Each of the main characters exists on the boundary between the two groups, experiencing both of their values. Neither of the battling sides is depicted as irrevocably evil, and both include moderates and radicals.

In our present society, when living alongside people with different values is unavoidable, how can we get on with the “other”? Zombie films and other works reflect our repeated trial-and-error patterns of confrontation and coexistence. They will undoubtedly continue to hold the same fascination for viewers.