Eighty-year-old Ishihara Shintarō has put the cat among the pigeons again, announcing that he will resign from his position as governor of Tokyo in order to form a new political party and stand as a candidate in the next elections for the House of Representatives. Ishihara caused an international furor earlier this year with his plans for the metropolitan government to purchase the disputed Senkaku Islands. Now attention is focussed on the impact his decision will have on the movement to build a “third force” in Japanese politics, capable of taking on the Democratic Party of Japan and the Liberal Democratic Party.

This recent development means that the leaders of all three of Japan’s major urban centers—Tokyo, Osaka, and Nagoya—have now set themselves up in opposition to the established political parties. A new age is dawning in Japanese politics, with charismatic and directly elected leaders from major cities taking on the national government in the public policy arena. 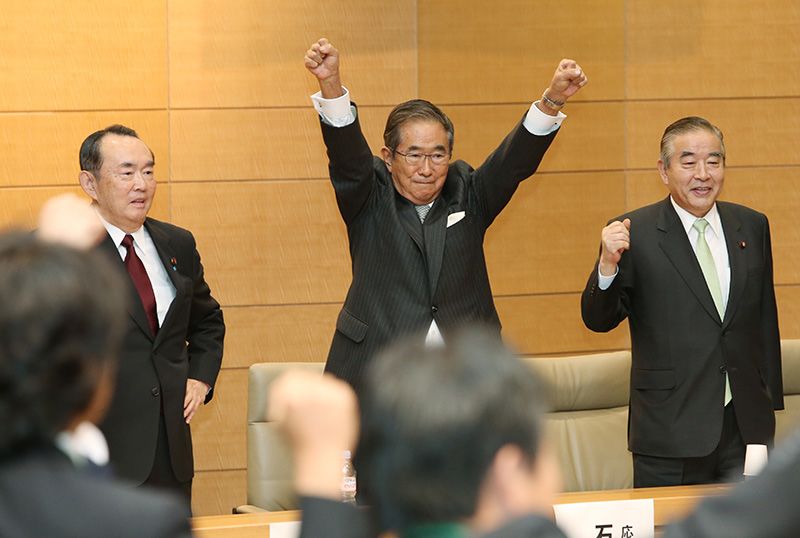 Ishihara Shintarō expresses his support at a meeting held by the Sunrise Party of Japan’s national campaign manager, shortly after announcing his resignation as governor of Tokyo. Photo courtesy of Jiji Press.

Ishihara’s announcement was not a complete surprise. Hiranuma Takeo and other Diet members have been mooting the possibility of a new party led by Ishihara for some time. But Ishihara’s sudden decision to resign after running the metropolitan government for 13 years since his election in 1999 took the media by surprise.

Ishihara says his decision to form a new party was prompted by a need to “shake up the centralization of power and reform the bureaucrat-dominated system that has prevailed since the Meiji era.” He is angling for an alliance with the Japan Restoration Party, led by Osaka Mayor Hashimoto Tōru. How voters will react remains unknown but the announcement has certainly succeeded in giving new momentum to the movement to build a third force in Japanese politics, after a period in which leadership tussles in both main parties had monopolized the media spotlight.

Campaigning for the election to decide the next governor of Tokyo officially begins on November 29. Results are expected on December 16. The government of the Tokyo metropolis is huge, with a GDP close to that of the Netherlands. Ever since Aoshima Yukio, one of the first of a new breed of charismatic “star politicians,” became governor in 1995, a certain degree of national fame has been more or less an unofficial requirement for anyone wishing to challenge for the office. This is particularly true in a short contest like this one. Many will be watching closely to see whether any of the parties support a candidate running on energy issues, in an attempt to win support by promising a nuclear power exit.

The ability of prefectural governors and city mayors to stand up to the national government comes from the way they are elected without support from the established political parties. Local leaders owe their positions to their personal popularity with voters. The old way of doing politics, in which local leaders relied on their close ties to the metropolis to help them rule the roost in the regions, is no more—a victim of fiscal pressure on the central government and dwindling budgets for public works projects. This is one of the reasons why reformist governors pushing for administrative reform and government regeneration first rose to prominence around a decade ago. Since then, a number of governors and mayors with national name recognition have sought to appeal to the electorate by striking an attitude of opposition to the political establishment.

Ishihara’s move follows the launch of the Japan Restoration Party by Osaka Mayor Hashimoto Tōru and Osaka Prefecture Governor Matsui Ichirō, and the Genzei Nippon (Reduced Tax Japan) movement spearheaded by Nagoya Mayor Kawamura Takashi and the governor of the surrounding Aichi Prefecture, Ōmura Hideaki. The leaders of all three of Japan’s major urban centers are now flag-bearers for new political parties. While the prime minister struggles against the limitations placed on him by the cabinet system and the log-jammed Diet, the directly elected “presidential-style” leaders of local governments dominate their local assemblies and have a powerful say in the media. The different ways in which the top jobs are filled at the national and regional level has given rise to a kind of role reversal, with regional leaders able to exercise far more power than their counterparts in the national government.

The Big Cities vs. the Regions?

But many questions remain for supporters of efforts to build a third force in politics. The first concerns policy discussions among the three major players. How much progress can be made in negotiations between Ishihara’s new party, Hashimoto’s Japan Restoration Party, and the Your Party block, led by Watanabe Yoshimi? The media has tended to concentrate on likely areas of contention such as energy policy—particularly attitudes to restarting the country’s stalled nuclear power stations and building new ones—and the leaders’ views on the proposed consumption tax hike. But even on decentralization and regional reform, where the three parties’ policies are expected to be close, the potential for friction remains.

It is likely that the three parties will agree to a proposal to introduce a new system of regional administration known as the dōshūsei (regional state system). This would scrap the 47 prefectures and reorganize them into a smaller number of larger regional blocks along the lines of the German Länder. But it will be much harder to reach agreement on the question of converting the consumption tax into a regional tax—another priority for Hashimoto’s party. Ishihara has previously dismissed the idea as “impossible.”

One option would be to scrap the current system, in which the regions are given allocations of funds from central government revenue, and divert the revenue from the consumption tax directly to the regions. But abolishing the regional allocation tax would likely lead to a debate about the issue of multiple rates of tax in different regions. Simply handing tax revenue over to the regions in which it is raised, however, would result in a dramatic imbalance in favor of the major cities. Even after a reform, therefore, some kind of fiscal adjustment mechanism will still be necessary. Ishihara has previously expressed reservations about whether it would be realistic to attempt to introduce a system of this kind under the present vertically aligned system of prefectures and municipalities.

Another factor to bear in mind is the potential for conflict between regions. The aggressive stance taken by the new parties led by regional local leaders has the potential to lead to antagonism between the major conurbations and rural districts.

Hashimoto has said he wants to increase the rate of the consumption tax to 11%. Of this, 6% would be used to correct imbalances in tax revenue among prefectures. Whether he insists on the introduction of the dōshūsei system as a precondition for introducing this new taxation regime will be one of the key points to watch. In either case, people in many regions are deeply skeptical and staunchly opposed to the idea of scrapping the regional allocation tax. This is particularly true of prefectures with a large number of under-populated communities.

Another pillar of Hashimoto’s policy platform is to bring about a formal change in the status of Osaka Prefecture. Hashimoto wants Osaka to be officially renamed as a “metropolitan district” (“to”) on the same level as Tokyo. Ishihara is adamantly opposed to this idea, and is on record as saying that the term should only apply to “the capital city: the place where the head of state and national parliament are.” These differences are also important factors that cannot be discounted.

And what position would Tokyo have under a new system arranged on the dōshūsei model? This is another important question in the context of the Tokyo gubernatorial elections.

In 2006, a report on regional government published by the government’s 28th Local Government System Research Council recommended introducing a system of regional, state-sized blocks to replace the current prefectural system. The basic position of the report was that the Tokyo metropolitan area would be incorporated as part of a new “South Kantō” regional block, although the option was also left open of creating an autonomous region out of the Greater Tokyo metropolitan area and the city’s 23 “special wards.” The way in which the function and role of the capital is defined will have a considerable impact on the system as a whole.

Regardless of how these local government plans develop, the fact that the 23 “special wards” of Tokyo do not have the same privileges and sources of revenue as other municipalities is an issue that deserves more serious attention. New parties led by regional leaders are having a growing impact on national politics. These developments, along with the election of a new governor in Tokyo, look certain to raise a wide range of issues in the realms of self-government and local autonomy across the country.