Society Culture Oct 13, 2011
The victory of the “Nadeshiko Japan” team at the FIFA Women’s World Cup 2011 in Germany has been one of the bright spots in a year marred by natural disaster. We chart the team’s progress from unpromising beginnings to the pinnacle of the world game.

The victory of the Japanese women’s soccer team at the FIFA Women’s World Cup in Germany this summer prompted national jubilation, turning the players into overnight celebrities and sparking an unprecedented wave of interest in the women’s game. For me, one player stood out above all the others—instrumental in the role she played not just as an inspiration to her teammates but as the driving force behind the women’s game in Japan as a whole. That player is midfielder and captain Sawa Homare, who returned from the World Cup as leading goal scorer and was voted the best player of the tournament. Fourth in the FIFA world rankings before the tournament began, the “Nadeshiko” (named after the Dianthus superbus flower, or Large Pink) were hardly outsiders. But their victory marked a first win in a major international tournament for any Japanese team, and brought consolation and solace to a nation still reeling from the effects of the March 11 earthquake and tsunami.

When the team left for Germany in late June, the press corps covering their departure from Central Japan International Airport consisted of just 10 reporters. Not a single fan was in sight. When they returned as champions several weeks later, after a thrilling victory on penalties over the United States in the final, there were hundreds of fans and some 260 reporters waiting to greet them at Narita Airport. The contrast with Japan’s first forays into international competition could hardly have been starker. Veteran forward Andō Kozue remembers the indifference that met the team on its return from the World Cup in 1999, when “not a single person was there to meet us.” This time, the squad became the first sports team ever to receive a People’s Honor Award. With Nadeshiko fever sweeping the nation, the team was suddenly swamped by interview requests—not just on their days off, when the players were often busy appearing on TV shows and filming commercials—but on training days too. Sawa, though, didn’t object to the attention: “In the past, women’s soccer in Japan always existed out of the limelight. If people are starting to show an interest in what we’re doing, that’s great.” Sawa threw herself into public relations work as if making up for lost time, showing no hint of tiredness despite her heroic exertions at the World Cup. 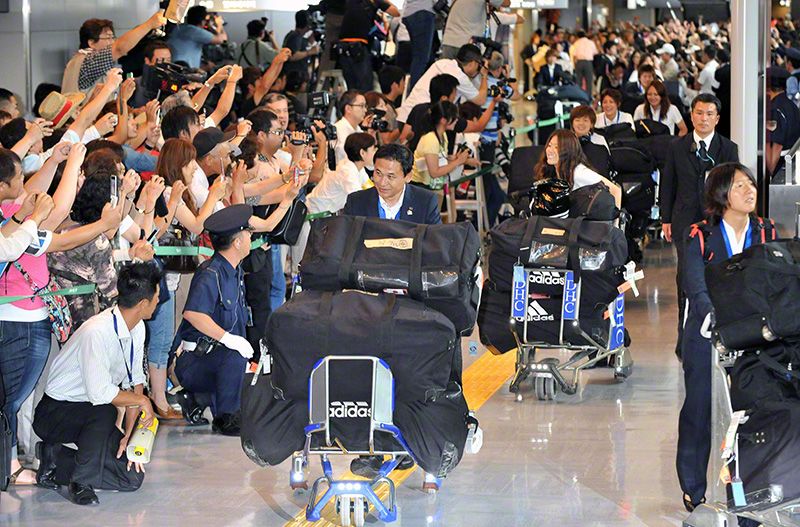 July 19. The Nadeshiko Japan team returns to a rapturous reception at Narita Airport after their victory in the FIFA Women’s World Cup 2011.

The Dynamo that Drives the Team

The journey of Japanese women’s soccer from humble beginnings to world champions took 45 years. The history of women’s football as an organized sport in Japan dates back to 1966, when the first girls’ team came together at an elementary school in Kobe. A succession of club sides and company teams started in the seventies, followed in 1979 by the All-Japan Women’s Football Championship. Teams were eight-a-side, and games consisted of 25-minute halves on playing areas one third smaller than conventional men’s pitches. In the early days, the rules were modified to ban chest traps, one of the basic skills of the game.

In the 1980s, the rules were brought in line with the men’s game, and the Japan Women’s Football League (today known as the Nadeshiko League) was formed. China hosted the first Women’s World Championship in 1991, later officially recognized as the first Women’s World Cup. Women’s soccer became an Olympic event at the Atlanta games in 1996. Japan was present at both these tournaments from the outset, making it through to the elimination rounds at the World Cup in Sweden in 1995 before going out to the United States in the quarter-finals. 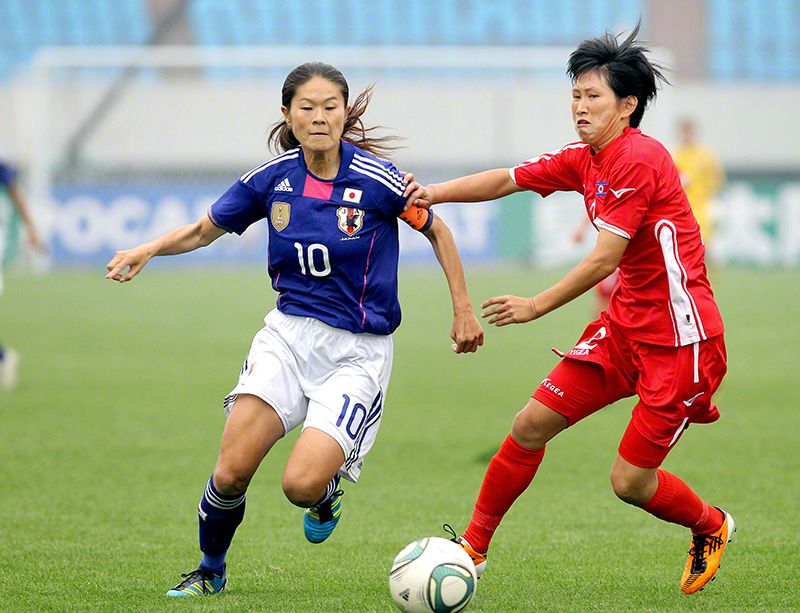 Sawa Homare dribbles past an opponent in Japan’s game against North Korea in the Asian qualifiers for the London Olympics.

Despite this early progress, Japan was eliminated at the group stage from both the 1996 Olympics and the 1999 World Cup in the United States. And because this latter tournament also counted as an Olympic qualifier, the team suffered the ignominy of missing out on the Sydney Olympics the following year.

Around this time, there was a dramatic drop in attendance figures at league games in Japan, and with the Japanese economy continuing to struggle, several leading corporate-sponsored teams folded, including Suzuyo Shimizu and Nikkō Shōken. The passion and excitement that had been building in Japanese women’s football began to cool, and the sport entered a period of hardship.

Sawa has direct experience of these years of toil and disappointment. In June 1999, her professional contract with NTV Beleza was cancelled. Not long afterward, Sawa took up the offer of a professional contract with the Atlanta Beat in the United States. She withdrew from Teikyō University and moved to the United States, only to face further disappointment when the Women’s United Soccer Association league folded in 2003. Sawa decided to return home to lift the Japanese women’s game out of its slump.

“When the Going Gets Tough, Look at My Back.” 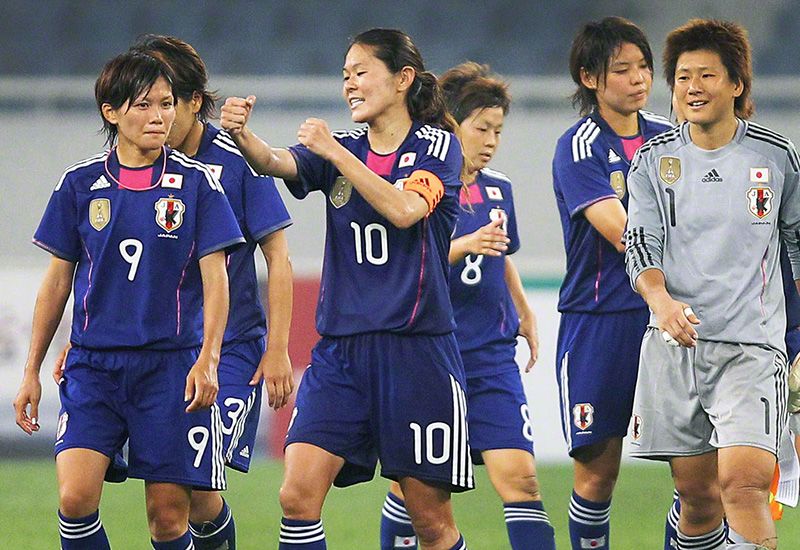 The team has gone from strength to strength under Sawa’s inspired leadership (pictured during Japan’s game against South Korea during the Asian Olympic qualifiers).

Japan finished fourth in the 2003 AFC Women’s Championships, which also served as qualifiers for that year’s World Cup. With just two qualification spots and a place in a playoff up for grabs, this result would normally have seen Japan miss out on World Cup qualification for the first time. But with China qualifying automatically as hosts, Japan jumped a spot into third place, earning a home-and-away playoff against Mexico, the third-placed team in the North, Central America, and Caribbean group. (The 2003 World Cup was relocated from China to the United States because of the SARS outbreak, but China retained its right to automatic qualification.)

Japan came away with a draw from the opening game in Mexico, and entered the decider at the National Olympic Stadium in Tokyo with the scores still level. Sawa headed home the winning goal and sent Japan to the finals. In the nick of time, Japan had clawed its way back to ensure qualification for its fourth consecutive World Cup.

Then team captain Ōbe Yumi, who was playing as a defender at the time, remembers the inspiration that Sawa provided to her teammates in the face of challenges from Japan’s Asian football rivals. “Teams like North Korea and China are driven by a special kind of hunger that goes beyond physical strength and technical skills—they are fighting for their quality of life and for the sake of their country. I think a lot of us were asking ourselves what we were really involved in the game for . . . what it was that drove us on. Sawa’s success in the States, and her drive, made her an inspiration. She was the benchmark that everyone else aspired to.”

Sawa played in all of Japan’s games at the Athens Olympics in 2004 and led from the front as the team qualified for the elimination rounds for the first time, eventually going out in the quarter-finals. At the Beijing Olympics in 2008, several other players began to make their mark alongside Sawa, including midfielder Miyama Aya and forward Ōno Shinobu. After defeating the hosts China in the quarter-finals, Japan finished fourth, just one win short of a place among the medals. Sawa’s words of encouragement to younger players during the tournament became legendary: “When the going gets tough, look at my back.” In 2010, Japan won the Asian Games for the first time, earning bragging rights as the best team in Asia. But the team had its sights set even higher.

Note: Table based on data from the Japan Football Association website.

From Asian Superpower to World Champions

In 2010, the Japan Football Association introduced an ambitious new system of sending designated players overseas in an attempt to bridge the skills gap between the best Japanese players and world powers of the women’s game like the United States and Germany. Inspired by Sawa’s early example in gaining experience overseas, the association announced that it would pay players an “allowance” of ¥10,000 a day to make it easier for other players to test their skills against the best by playing in Europe and the United States.

One of the people instrumental in proposing the scheme was JFA Director and NTV Beleza head coach Noda Akemi. Noda says many of her fellow directors were against the idea, claiming that it would deprive the domestic league of its best players and lead to a decline in the popularity of the sport in Japan. But Noda was adamant. “Even a year is enough to learn valuable skills. Even if there is a little impact on the domestic league, the experience of playing overseas will help our players to understand that they don’t need to be afraid of their foreign opponents.” Among the players whose skills benefited from this system were forwards Andō Kozue (FCR 2001 Duisberg, Germany) and Nagasato Yūki (FFC Turbine Potsdam, Germany), and midfielder Utsugi Rumi (Montpellier HSC, France). Several more have taken up the challenge this year, among them Sameshima Aya, who moved from the pro leagues in the USA to take up a place with Montpellier HSC in France, and Kumagai Saki, who will play for FFC Frankfurt in the German league.

Japan’s victory after extra time over host nation Germany in the quarter-finals remains a particularly vivid memory from the FIFA Women’s World Cup 2011. Despite being forced onto the defensive (Germany had 23 shots on goal against Japan’s 9), the Nadeshiko team managed to weather the storm and emerge victorious—thanks in large measure to the experiences of Sawa and the other players who had improved their skills and physical strength by competing regularly against tough foreign players during their time overseas.

The team’s next big challenge came with the Asian qualifiers for next year’s London Olympics, played in China in August and September. With interest in the team still at fever pitch in Japan, the media attention in the players at times threatened to interfere with their training. Head coach Sasaki Norio was left to lament the lack of preparation that saw his squad enter the qualifiers in less than ideal condition. “Ideally we would have liked to do more running work. But if I’d pushed them any harder we’d have ended up with injuries,” he said. Despite the challenges and distractions, the team’s confidence as world number one remained unshaken, and the Nadeshiko maintained their pride as world champions by finishing the tournament at the top of the rankings and ensuring qualification for the Olympics next year.

Nevertheless, there was no sign of complacency or arrogance. “We won’t stand a chance of a medal unless there is a major improvement from every single player,” Sawa says. “Many of squad who played in the qualifiers still don’t have a sound understanding of basic techniques or the team ethos,” she added, exhorting her young charges to even greater efforts in the challenges to come. Teams like Germany and the USA, still smarting from their first losses to Japan at the World Cup this summer, look likely to be Japan’s toughest opponents once again as the Nadeshiko aim to make it two major tournament wins on the trot. “We need to lift our game right across the board, so that any player in the squad can come onto the field and make a real contribution,” Sawa says. Japan’s captain and inspiration is now 33. Will the London Olympics next year mark the crowning achievement of her remarkable sporting career? 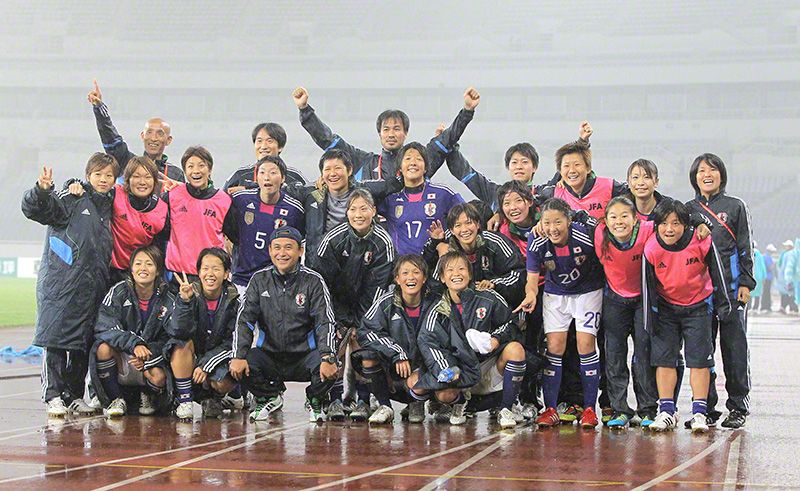 September 2011. After finishing the qualification tournament at the top of the rankings, the team looks forward to more winning performances during the Olympics next year.

(Originally written in Japanese. Photographs by the Hōchi Shimbun.)