Will Japan’s Budget Airlines Take Off?

Japan’s tourism and travel industry continues to hemorrhage in the wake of the March 2011 earthquake and tsunami, and international tourism has been especially hard hit. Last September the number of inbound international visitors was down 24.9% from the previous year, and while the month-over-month declines has begun to level off a bit, the situation remains bleak. Small wonder people are looking to Japan’s upstart low-cost carriers (LCCs) to give a much-needed boost to the travel industry and the economy as a whole. But LCCs face unique challenges in Japan, and it is by no means certain that those obstacles can be overcome. 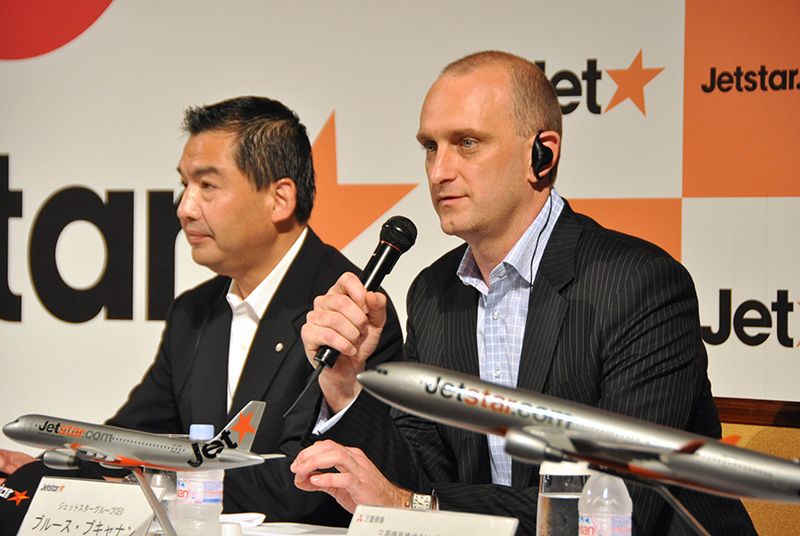 A number of systemic factors contribute to make air travel particularly expensive in Japan. One is Japan’s airport fees, which remain far above the international norm. Ground handling charges in Japan are about six times higher than in Australia and about eight times higher than those in Singapore, according to Bruce Buchanan, chief executive officer of Jetstar Group. Buchanan warns that if those fees are passed on to the customer, they could limit the appeal of budget airlines and prevent demand from taking off. The airline industry has lobbied hard for lower fees, and some relief could be on the way; Kansai International Airport has begun construction of an LCC terminal, and Narita International Airport has similar plans. But the impact on fees remains to be seen.

Another potential problem is the no-frills approach of budget airlines, which requires customers to take responsibility for their own trip. LCCs expect travelers to buy their own tickets online, find their way to the gate, and walk to their airplane on their own. But in Japan travel agencies have continued to play a major role in ticketing and other travel arrangements. Cognizant of this distinctive feature of the Japanese market, the new budget airlines have resigned themselves to selling a relatively large percentage of their tickets through such agents, at least for now. But since such added distribution costs are anathema to budget airlines, the LCCs are no doubt counting on the market to mature quickly. The question is whether Japanese travelers will oblige. 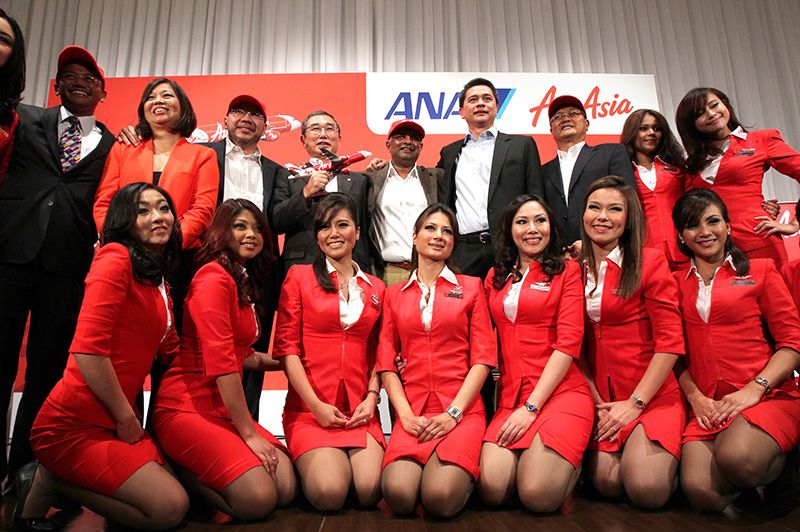 Japan’s LCCs must overcome internal challenges, too. To one degree or another, the three new budget carriers are all offshoots of the big Japanese airlines—in essence, a means for the major carriers to expand into budget air travel under a different brand: Jetstar Japan, formed by JAL and Australia-based Jetstar; AirAsia Japan, a joint venture of All Nippon Airways and Malaysia’s AirAsia; and Peach Aviation, a joint venture led by ANA. This is a perfectly understandable approach. From the viewpoint of the overseas companies, teaming up with Japanese airlines is a logical way to penetrate a market that erects high barriers to foreign participation (a situation by no means unique to Japan). The Japanese airlines doubtless saw such partnerships as a sound preemptive strategy for dealing with potential competition from the powerful LCCs.

The problem is that big airlines have a dismal track record in this market segment. In fact, Jetstar—a low-cost subsidiary of Australia’s Qantas—is one of the very few success stories. And it has yet to be seen whether Jetstar can maintain its managerial agility and creativity as the company continues to expand.

Most experts agree that two of the biggest obstacles facing budget subsidiaries of conventional airlines are contamination and cannibalism. 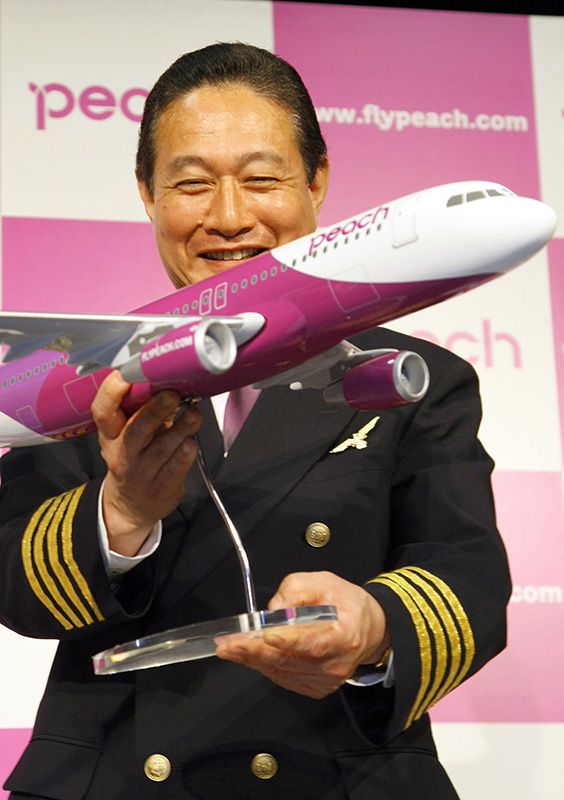 Peach Aviation CEO Inoue Shin’ichi dons a pilot’s uniform at the public christening of his new LCC, based at Kansai International Airport. Inoue was previously an executive at ANA, which launched the budget airline (May 2011). (Photo: Sankei Shimbun)

Contamination occurs when the parent company is too involved in the subsidiary’s management, influencing it by means of seconded personnel and other connections. Without true independence from the parent company, an LCC is likely to lose its all-important flexibility, agility, and capacity for innovation. Industry insiders say that the way to ensure independence is to create a completely separate work environment, so distinct from that of the parent company that employees are scarcely aware of the connection. In this respect, Peach Aviation has a long way to go.

Cannibalism, conversely, occurs when the two airlines fail to differentiate their markets and start competing over the same routes, cutting into each other’s sales. In the worst case, this can end with the collapse of both companies. Out of the five routes for which AirAsia Japan has applied, four (Narita to Sapporo, Fukuoka, Naha, and Seoul) overlap with ANA’s network. Jetstar says that it holds consultations as needed to avoid cannibalism among its group companies, but the larger the group grows, the more difficult it becomes to maintain this sort of balance.

Another major challenge is to clearly differentiate the no-frills budget brand from the full-service parent brand. This means building a corporate culture devoted to the budget concept, and one wonders whether this is possible in the Japanese market. Japanese companies are extremely service oriented, and Japanese employees at every level make a virtue of going above and beyond the call of duty to accommodate their customers. The danger is that this impulse will conflict with the LCC imperative of cutting costs by eliminating frills.

One must also ask whether Japanese travelers are willing to take the added risks associated with LCCs. One of these is the risk of route closure. LCCs are inclined to make quick judgments on profitability and will not hesitate to abandon routes considered unprofitable. To be sure, JAL and ANA are expected to move more quickly to jettison unprofitable routes now than they had in the past, when they routinely kept local routes open at the behest of the Liberal Democratic Party. Even so, the big airlines are bound to be more dependable in this regard than LCCs.

Perhaps a more serious risk for Japanese travelers is the tendency of LCCs to cancel underbooked flights to save money. For Europeans enjoying a month-long vacation from work, a delay of a day or two may not make that much difference. But for Japanese families trying to make the most of a weeklong vacation, every hour counts. Under these conditions, one flight cancellation can wreak total havoc on travel plans. If the LCCs’ proclivity for last-minute cancellations carries over into the Japanese market, travelers in Japan will begin to shy away from budget carriers. 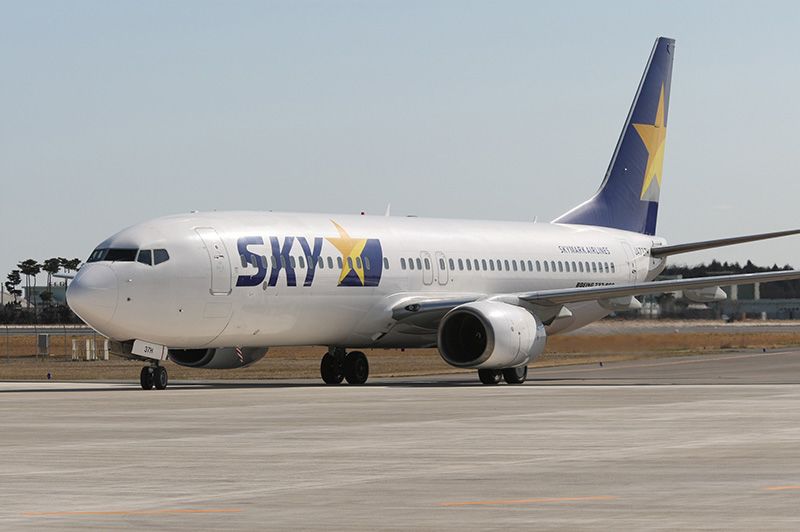 Skymark, Japan’s most successful independent startup airline. The carrier is expanding its Narita-based network, with new flights to Hokkaidō (Shin Chitose and Asahikawa) launched last October, and flights to Fukuoka and Naha scheduled to begin in late 2011 and early 2012, respectively. (Photo: Sankei Shimbun)

We have discussed the management issues concerning the LCCs launched by major carriers, but what about homegrown independent budget airlines? The problems facing independent LCC startups in Japan can best be understood by looking at Skymark, which entered the market back in the late 1990s. Despite Skymark’s relatively long record as an independent carrier, it has made little progress achieving economies of scale and consequently has been able to offer only modest savings to travelers. It has yet to make serious inroads at Tokyo’s Haneda Airport, Japan’s most profitable hub for domestic and regional flights; departure and arrival slots there are still limited for the carrier, while JAL and ANA continue to enjoy preferential treatment in their allocation.

Skymark’s latest strategy is to expand its network of domestic flights centered on Narita. As part of this campaign it began offering flights from Narita to Hokkaidō last October at a rate comparable to the price of a bus ticket. But whether Skymark can induce travelers to abandon Haneda for Narita—almost 60 kilometers from Tokyo Station—is open to question. And it struggles with similar problems in the Kansai region.

The Importance of Leadership

Finally, a crucial factor determining the success or failure of an LCC is managerial leadership. This is a quality embodied in CEOs like Tony Fernandes of AirAsia, Bruce Buchanan of Jetstar, and Nishikubo Shin’ichi of Skymark. For AirAsia Japan and Jetstar Japan, created through joint ventures with major Japanese airlines, the key issue is whether the management structure will permit the top executives to exercise that kind of leadership. For Skymark, by contrast, the question is whether Nishikubo, whose background is in information technology, can assimilate the advice of industry insiders even while exercising his own brand of leadership.