Why Rice Is Vanishing from Japanese Tables

Lifestyle Aug 22, 2012
Japanese families are spending more on bread than rice for the first time ever, according to recent government findings. Iwamura Nobuko draws on the survey her own team has administered for the past 15 years to explain the historical and cultural factors underlying this shift.

In 2011 Japanese families spent more on bread than they did on rice. This was the finding of the annual Family Income and Expenditure Survey, conducted by the Ministry of Internal Affairs and Communications. According to the ministry, 2011 expenditures for rice averaged ¥27,428 among nonagricultural households of two or more members, as compared with ¥28,318 for bread. It was the first time bread took a bigger bite than rice out of Japanese budgets since the survey was initiated in 1946. How should we understand this fundamental dietary shift?

In demographic terms, the reason the Japanese diet has shifted so markedly toward bread consumption in recent years is that those who have grown up with bread as part of their everyday diet now constitute a majority of the population. But how and why did Japanese children become accustomed to eating bread after World War II?

Historical circumstances are part of the explanation. When Japan was under US Occupation and facing severe food shortages after World War II, the United States provided food aid in the form of flour made from surplus American wheat and made it the staple of the subsidized lunches provided at elementary schools in urban areas. After the Occupation, Japan continued importing surplus US wheat and using it for the government’s school lunch program, which was extended to all elementary schools and then (with the 1954 School Lunch Law) to all junior high schools. During the 1960s, bread-based school lunches spread to every part of the country.

Today, practically all Japanese people up to the age of 60 or so have grown up with bread as a component of at least one of their daily meals. In fact, the only households that spent more on rice than bread in 2011 were those headed by adults aged 60 and older, attesting to the critical role school lunches played in the shift from rice to bread.

The Japanese government, from the late 1950s into the 1960s, also accelerated the shift away from rice with public information designed to persuade the public that a Western diet built on bread, meat, and dairy products was essential to build strong bodies. Sweeping policies to encourage a shift from farming (including rice cultivation) to other industries played a role as well.

And finally, amid a general enthusiasm for Western lifestyles, people embraced the custom of breakfasting on toast and juice at a Western-style dining table as somehow more elegant. Together, these factors helped trigger a major shift in the Japanese diet, beginning around 1960.

That said, these historical factors alone cannot explain the wholesale shift in Japanese dietary habits. A more fundamental explanation must be sought in the way contemporary Japanese families prepare and eat their meals.

The results of an annual survey of family eating habits that I have overseen since 1998 suggest that the declining role of rice in the Japanese diet is closely connected to two interrelated mealtime trends: a preference for meals that lend themselves to easy preparation and cleanup and a tendency for family members to take their meals separately.

Japanese families nowadays are more inclined to honor each member’s preference and convenience. Largely as a consequence, it has become increasingly common for family members to dine separately, eating the food they like at the time most convenient for them. The overwhelming majority of families approach breakfast this way and many eat weekday dinners separately once their children enter high school. 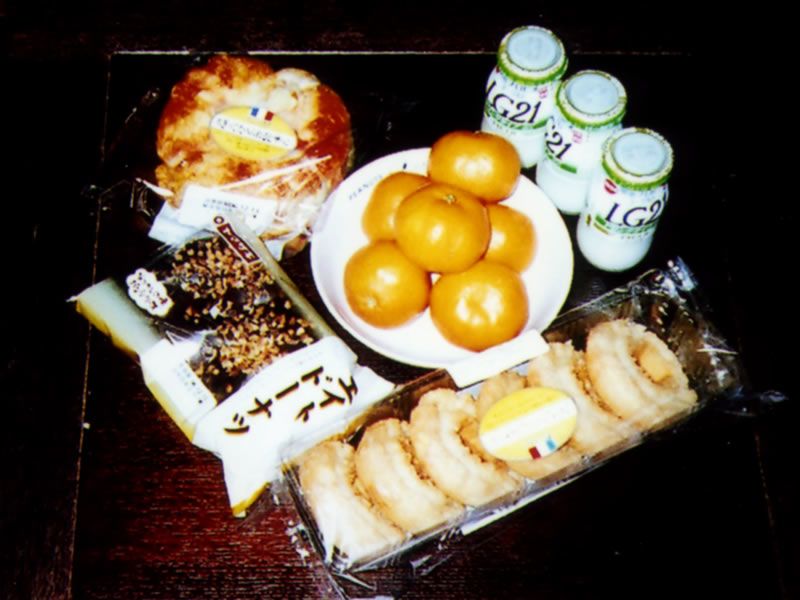 Ready-to-eat products are arrayed on a Japanese breakfast table, allowing family members to eat when and how they please. This particular family consists of a father, age 43; mother, 39; and two children, 13 and 7. Photo courtesy of Iwamura Nobuko.

The traditional Japanese “soup and three” meal—typically, miso soup and three side dishes, in addition to rice and pickles—is ill-suited to such individualized eating habits. For each meal, the rice has to be prepared or kept hot and soup must be cooked or reheated. Moreover, no rice-based meal is complete without a variety of protein and vegetable side dishes, which are time-consuming to prepare and may not appeal to every family member’s tastes. By contrast, bread and pasta lend themselves to quick, simple, one-dish meals in the form of sandwiches, meat-filled pastry, pizza, instant ramen, udon noodles, or pasta with prepared sauce, not to mention microwavable frozen dinners of various sorts.

It was about 10 years ago that respondents to our annual survey began agreeing with the statement that “meals based on [Japanese] rice are a bother because one has to prepare side dishes.” Since then, the shift away from traditional Japanese meals has progressed year by year. Clearly, convenience is another important factor in the decline in rice consumption.

There is no evidence that these changing consumption patterns reflect a fundamental change in Japanese taste where rice is concerned. To the contrary, the enduring popularity of Japanese rice is evident from brisk sales of convenience store onigiri (seaweed-wrapped “rice balls”) and from the success of “conveyor belt sushi” shops and restaurants specializing in gyūdon—a beef (gyū) concoction placed atop a large bowl (donburi) of rice. Moreover, rice continues to be the carbohydrate of choice at family meals featuring a variety of dishes, as 15 years of survey results show. However, as the number of dishes per meal declines, rice tends to be replaced by bread, noodles, or pasta.

We should note also that onigiri and donburi dishes are two ways in which Japanese rice can be transformed into a simple meal involving the absolute minimum number of dishes. Making onigiri involves little more than squeezing rice into a compact shape. Donburi can be prepared by topping a bowl of rice with something as simple as a fried egg, nattō (fermented soybeans), or kimchi; merely by adding the suffix -don to these and other convenient foods, one can elevate a quickly improvised dish to the status of a meal. In this sense, onigiri and donburi can be thought of as the rice equivalents of filled pastries and pizza. It is not surprising, therefore, that onigiri and donburi have come to occupy an increasingly prominent place among the dwindling rice-based meals eaten in Japanese homes.

As the foregoing suggests, a complex combination of factors, including historical circumstances in postwar Japan and a growing preference for simple meals eaten individually, have created the conditions for the dietary shift that has caused bread to overtake rice among household expenditures—yet another illustration of the truism that food is culture.