Japan and Russia: Breaking the Ice

Politics Economy Dec 11, 2013
Climate change is causing the ice covering sections of the Arctic Ocean to recede. This enables greater use of the Northern Sea Route, a shipping lane between Europe and the Far East that's about 40% shorter than the southern route that passes through the Suez Canal. Kitagawa Hiromitsu of the Ocean Policy Research Foundation argues that the new route offers Japan a rare opportunity to improve relations with its neighbor, Russia.

The Northern Sea Route, which mainly runs through Russian territorial waters, is defined by Russia as a shipping lane that extends westward from the Bering Strait to the Kara Strait, located at the southern tip of the Novaya Zemlya archipelago. During the summer, there is a two-week window of opportunity when the route is free from ice, allowing ships to pass safely through. 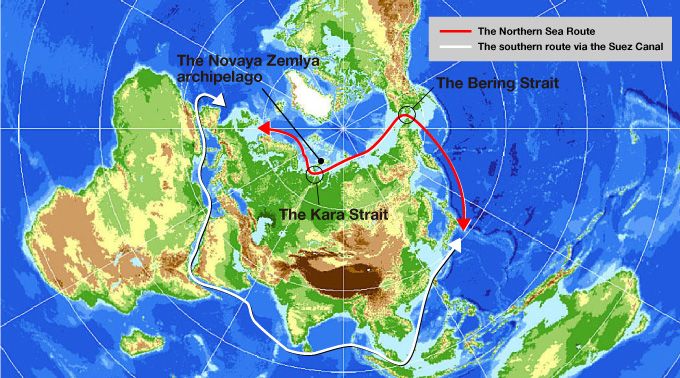 Norway, situated at the northernmost part of the Scandinavian Peninsula, has abundant natural resources, including oil. A ship departing from Kirkenes, Norway, bound for Japan via the Northern Sea Route, can sail east along Russia’s northern coastline, pass through the Bering Strait, head south along the Kamchatka Peninsula, and arrive at Hokkaido. This route is only about 40% as long as the alternative, southern route, which passes through the Mediterranean Sea and the Suez Canal, across the Indian Ocean, through the Straits of Malacca, and from there to Japan.

The shorter route means lower fuel costs for tanker ships, which have soared in recent years, and can also be expected to curb exhaust emissions, particularly black carbon, or soot, a byproduct of fuel combustion. In addition, by taking the northern route, ships can avoid the dangerous waters off the coast of Somalia and in the Straits of Malacca, where piracy is rampant. For all these reasons, the Northern Sea Route offers unmistakable economic advantages.

Due to instability in the Middle East, especially the ongoing unrest in Egypt, Western European countries are hastening to avail themselves of the Northern Sea Route. For the most part such efforts are still in the preliminary stages, but Western European firms that have used the Northern Sea Route appear to be working quickly to make it a viable alternative in the event the southern route becomes unavailable.

There are some disadvantages, however. For one thing, deep-draft supertankers have a hard time traversing the relatively shallow waters of the Bering Strait. Furthermore, the presence of ships passing through the Arctic Sea is likely to have adverse effects on the natural environment. It’s also difficult to set insurance rates for shipping via the northern route, since it hasn’t been used much in the past so risk factors can’t be definitively assessed.

Russian President Vladimir Putin has encouraged commercial use of the Northern Sea Route, pledging to turn it into a major artery for international transport. The use of Russian nuclear-powered icebreakers can alleviate risks and help curb any sharp rise in insurance rates. The icebreakers and their crews not only make sure the route is cleared, they can also render assistance if a tanker ship runs into trouble, such as by dealing with leaks or spills, making repairs, and mounting rescue operations. In light of conditions in the Arctic Sea, the availability of seaborne rapid-response support, as opposed to land-based support, would seem appealing to insurance firm providing coverage for ships.

At present, however, only about 100 ships per year use the Northern Sea Route, a trifling number compared to the approximately 18,000 ships that travel the southern route. Given the fact that the northern course is unusable in the winter months, there seems little likelihood that it could become a major shipping route on a par with the southern route anytime soon. Nevertheless, from the standpoint of energy security, the Northern Sea Route is an option worth considering for Japan as well.

Japan was granted observer status in the Arctic Council at a ministerial meeting held in Sweden in May 2013. This move, which enables Japan to regularly attend meetings among governments with interests in the Arctic, is a significant step forward. Although it does not have a voice in the organization, Japan can nevertheless lobby the members and gather information bearing on its national interests. I hope that Japan will be represented by members of the private sector who have strong credentials in the energy and distribution industries, and can stay with the organization for the long term, in order to help Japan move forward in the future.

Japan depends primarily on oil from countries in the Middle East and natural gas to meet its energy needs. For minerals, it relies heavily on imports from Australia. There’s no guarantee, however, that these countries will continue to meet Japan’s needs. The Arctic coastline doesn’t have much in the way of petroleum deposits, but it’s rich in natural gas and minerals, including iron ore. These resources are already being developed by business interests in India and China, which need vast quantities of resources to create domestic infrastructure. Japan is a late arrival. Unless preparations are made very quickly, by the time Japan really needs resources from the Arctic, they’ll all be spoken for.

Foreign businesses have been developing resources in the Scandinavian countries for some time. This has yet to occur in Russia, though, and there’s still room for Japanese firms to gain a foothold. Although the Russian economy has expanded rapidly since the dissolution of the Soviet Union, the perceived progress actually amounts to little more than a sudden influx of foreign currency derived from exports of the country’s abundant underground resources, which had previously been reserved for domestic consumption. This has prompted warnings from the International Monetary Fund over the country’s excessive reliance on exports of natural resources.

An analysis of data from the Russian government shows that the growth rates posted by major industries is directly proportional to investments made by the state. There’s no denying the soaring economic growth, but the linear relationship between investment and output reveals an economy wholly dependent on systematic state-sponsored investment, with precious little growth in private industry. Apparently motivated by concern over this vulnerability, Putin has shifted the focus toward exporting inexhaustible “commodities” such as electric power, instead of simply selling off Russia’s natural resources. This provides Japan with an opening: the need for Japanese technology.

Advanced technology tends to be associated with the IT and communications sectors, but it’s important to keep in mind that heavy industry is being transformed by technology as well. The development of oil and gas deposits beneath the ocean floor has only become possible thanks to technological advances. Japanese and Russian interests have collaborated on developing energy resources on and around the northern island of Sakhalin, and the Russians have been very receptive to Japanese private-sector investment. Given their interest in expanding the Russian economy while avoiding further reliance on oil and gas exports, Putin and those around him are apt to be especially keen on tie-ups with the Japanese, hoping that the latter’s passion for high-quality manufacturing will rub off on Russians.

China is currently Russia’s primary “customer” in terms of accessing the Northern Sea Route, but Russia can’t attain the kind of economic growth it’s aiming for by doing business with China. Yet China does constitute an enormous market that Russia can’t afford to ignore. That’s why Japan should make its own bid to take advantage of the Northern Sea Route now, while the appeal of its technological prowess still holds sway. This chance may not come again.

The most valuable advantage Japan can obtain through the use of the northern route is, of course, a portion of Russia’s vast trove of petroleum and other subterranean resources. At the same time, Japan will be benefiting from the superior skills of Russian seamen. Russian icebreakers are generally manned by highly capable crews who are far more experienced at navigating arctic seas than sailors anywhere else. It takes a great deal of skill to pilot a ship through the icebound Arctic Ocean. Even satellite technology can’t tell you how thick the ice is in any given location, so the person at the helm has to quickly identify and avoid the impenetrable older ice and steer for the newer ice, which will give way. That kind of skill only comes with experience.

The Scandinavian countries used to have crews who were equal to the Russians, but ice has been disappearing from the Baltic Sea due to the effects of global warming, and relatively few younger Scandinavian sailors have experience on icebreakers. There have been incidents in which Scandinavian icebreakers piloted by inexperienced sailors became trapped in the ice and had to be rescued by Russian ships. Even in Russia, highly skilled icebreaker pilots have dwindled in number over the years. While there are still some around, their skills should be put to use to enable safe and orderly passage on the Northern Sea Route.

The Northern Route to Better Relations

I propose that a shuttle transport operation be created to traverse the Northern Sea Route, staffed by seasoned Russian sailors, with due attention paid to the possible environmental repercussions. Designated base ports can be established on the Scandinavian Peninsula and in Japan, respectively, and sturdy vessels well-equipped to handle icy seas can make regular runs along the route. Cargo can be offloaded to regular ships at each base port for transport to its destination. This will provide a comparatively safe and economical way of carrying goods back and forth.

If Japan and Russia can become more closely linked by means of the Northern Sea Route, the bilateral relationship will surely change. It has to change. Provided Japan is sufficiently concerned to do something about this, Russia will be receptive. Political issues such as the status of the Northern Territories can be put aside, and the two sides can pursue a purely economic relationship. Preferably, as Japan and Russia grow closer, a resolution to the Northern Territories issue will emerge naturally.

(Originally published in Japanese on September 13, 2013.)