The Future of the Japanese Smartphone Market Following the Docomo iPhone

Economy Nov 19, 2013
NTT Docomo lagged far behind Softbank Mobile and KDDI in releasing Apple’s popular iPhone. How is this decision likely to affect the broader market?

The latest 5s and 5c models of Apple’s iPhone were released in Japan on September 20. With the new release, Japan’s leading mobile provider NTT Docomo has finally joined its two chief competitors, KDDI and Softbank Mobile, in carrying the popular phone.(*1)

When the iPhone was first announced in 2008, many people familiar with the Japanese market predicted that NTT Docomo would be Apple’s domestic carrier. These expectations were overturned, however, when Softbank CEO Son Masayoshi used his personal closeness to Steve Jobs to secure exclusive rights for his company. After three years, the deal came to an end in 2011, when KDDI was also granted a license to sell the iPhone.

Son’s first foray into the Japanese mobile market came in 2006, when he bought under-performing Vodafone Japan. He made deft used of his exclusive deal to bring about remarkable improvements in Softbank’s performance. So far the deal has brought operating profits exceeding ¥1 trillion. His dream of overtaking NTT Docomo as Japan’s number one carrier no longer seems far-fetched.

Shedding Users, Docomo Prepares for the iPhone Behind the Scenes

The iPhone outsells Android devices in Japan. But worldwide, Japan is something of an anomaly in this respect: the phenomenon of iPhone dominance is more or less limited to Japan and the United States. In that sense, Japan is perhaps Apple’s single most important market. Softbank marketed the iPhone aggressively during the three years of its exclusive deal. The debut of the phone on KDDI’s network in 2001 led to fierce competition on price and service. Both companies focused their main efforts on the iPhone rather than Android devices.

Unable to forge a licensing deal with Apple, NTT Docomo found itself hemorrhaging up to 100,000 customers a month to Softbank and KDDI. NTT Docomo responded by offering special deals on two globally popular phones from its summer 2013 lineup: the Samsung Galaxy S4 and the Sony Xperia A. In a desperate attempt to stem the flow, the company even offered discounts on these top-of-the-range phones to users who had still not upgraded from the conventional “Galapagos” phones popular before smartphone mania set in.

To differentiate its devices from the iPhone, NTT Docomo put major effort into promoting its streaming services, including movies, TV dramas, anime, and music. Additional content included shopping, lifestyle, and fashion sales in formats optimized for smartphones. The idea was to create demand for features not available on the iPhone.

Despite NTT Docomo’s efforts, however, the defections did not stop. Hence the decision to sell the iPhone. Until relatively recently, NTT Docomo had repeatedly claimed the company was unable to agree on terms with Apple. To all appearances the company was strongly resistant to the idea of introducing the iPhone. But in fact, behind the scenes it were preparing to combine forces with Apple.

The benefits of this partnership will not be limited to NTT Docomo. Apple will finally gain access to the largest customer base in the Japanese market, bringing an opportunity to increase sales further. NTT Docomo sells more than 16 million smartphones every year. If half of these are iPhones, Apple can expect to increase its sales in Japan by 8 million units.

A Harsh Winter In Store for Android Makers

NTT Docomo’s decision to carry the iPhone will have a big impact on Japanese phone makers. When NTT Docomo began its “top two” phone strategy, NEC Casio Mobile Communications announced that it would stop producing smartphones. Panasonic followed, announcing on September 26 that it will cease developing individual-use smartphones for the Japanese market. Given the long history of cooperation between NTT Docomo and domestic manaufacturers, these announcements likely made it easier for NTT Docomo to join the iPhone bandwagon.

The announcement will also come as a blow to the other domestic makers, including Sharp and Fujistu, as well as the “top two” makers Sony and Samsung. Staff at one Docomo Shop admitted that sales of Android phones had more or less ground to a halt within two weeks of the iPhone launch. The same shop has a waiting list of 400 iPhone orders and will struggle to clear the backlog by the end of the year. It is clear that the iPhone now makes up the bulk of NTT Docomo’s sales; Android makers should steel themselves for a tough domestic market this winter.

Over the long term, though, these effects will be minimal. It is even possible that the availability of a Docomo iPhone may actually help Android to thrive in Japan. NTT Docomo, Softbank, and KDDI cannot differentiate themselves unless they offer different lineups. KDDI is already strengthening its Android offerings. Previously, Sony’s and Samsung’s global flagship models were first available exclusively through NTT Docomo. For the 2013 winter lineup, however, KDDI released the Sony Xperia Z1 and the Samsung Galaxy Note 3 at the same time as Japan’s largest carrier. KDDI is also developing an original model, called Isai, in tandem with LG Electronics. This will allow the company to differentiate itself from the competition by offering an Android model unavailable from other carriers. 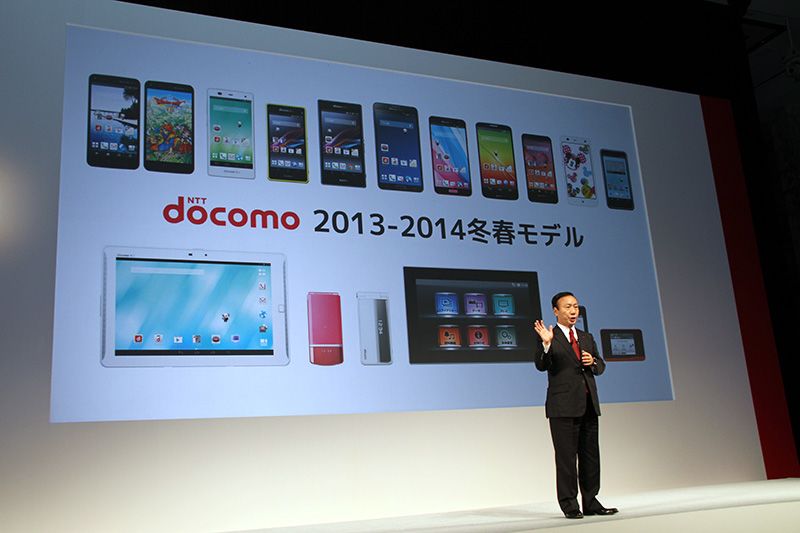 NTT Docomo’s 2013–14 winter and spring lineup, announced on October 10, continues to focus on Android, including 10 devices from Sony, Samsung, Sharp, Fujitsu, and LG.

Softbank did not announce any global models this winter, instead introducing three new phones from Sharp and one from Fujitsu .This made for a rather lackluster lineup of just four new smartphones. However, Softbank’s recent acquisition of a majority stake in US carrier Sprint puts Sharp in an important position. As Softbank prepares to take on the top two US carriers, Verizon and AT&T, Sharp’s long-standing relationship with Softbank will create opportunities. The four major US carriers—Verizon, AT&T, Sprint, and T-Mobile—all offer the iPhone. Softbank is hoping that Sharp’s expertise in LCD technology will help Sprint to differentiate itself from its competitors in the US market. The company plans to develop a single Android device for both countries.

While the popularity of the iPhone in Japan will surely continue to soar as more and more consumers make the switch to smartphones, don’t count the Android out yet: higher specifications and Japan-specific features including water resistance, TV compatibility, and simple interfaces for older users, will only be available on Android phones. Although the immediate future may be tough, manufacturers of these individually tailored smartphones will surely survive the long-awaited introduction of the Docomo iPhone.

(*1) ^ In Japan, the majority of mobile phones, including the iPhone, are sold directly by service providers and are locked to prevent usage with SIM cards provided by rival companies.—Ed.