Traditional Japanese Cooking in the Home: An Endangered Art

Culture Lifestyle Mar 5, 2014
Washoku, the “traditional dietary culture of the Japanese,” was recently inscribed on the UNESCO list of the world’s intangible cultural heritage. Iwamura Nobuko, a researcher into food and family life in modern Japan, looks at what “home cooking” really means for people in Japan today.

Washoku (traditional Japanese cuisine) has been in the headlines since December 2013, when the United Nations Educational, Scientific, and Cultural Organization (UNESCO) included it on the organization’s global list of intangible cultural heritage. Washoku as it is defined in this context does not refer to either the fancy multi-course meals available at traditional Japanese restaurants or the lighter fare served before a tea ceremony. What we are talking about here is traditional home-cooked Japanese food.

At the 200X Family Design Room, we carry out surveys to find out what kind of meals Japanese families are eating at home. Since news of the UNESCO listing broke, many television and newspaper journalists have been in touch for interviews. One of the questions they invariably ask is: “What is the current state of meals in the home?” This is not because they want to know about household diets particularly.

The reason for the question is that they are worried. Proud as they are to know that  washoku has been designated part of the world’s intangible cultural heritage, they are worried that washoku in the home today is little more than an echo of the past. One of the reporters admitted wryly: “I had curry rice for dinner yesterday, bread and coffee for breakfast this morning, and spaghetti for lunch.” His case is hardly exceptional.

When Mount Fuji was added to UNESCO World Heritage list in July 2013, we were able to celebrate without reservation. The case with washoku, though, is different. It feels like a warning to the Japanese people to rethink our diet.

The Shift Away from Washoku

I have now been studying Japanese family life through the medium of food for 17 years. By the end of December 2013 we had analyzed 7,413 food journal entries and 13,012 food photos from 353 households. These materials make it quite clear that washoku is appearing less and less frequently on the dining table.

But first we should define our terms. By washoku, I mean things like nizakana (boiled fish), o-hitashi (blanched greens with soy-sauce-flavored dashi [broth]), sunomono (vinegared food), aemono (vegetables, fish, or other food dressed typically with vinegar, sesame, or miso) and nimono (food boiled in dashi). All of these are becoming uncommon. Although western-style fried chicken is popular, Japanese tempura is rarely cooked at home nowadays. And chawanmushi (a kind of savory egg custard) has all but disappeared from home cooking, though it is still a fixture in restaurants.

The classic description of a typical Japanese meal defines it as consisting of ichijū sansai (“one soup and three side dishes”), where Japanese-style dishes such as those given above are typically served with rice and miso soup. This kind of meal is now extremely difficult to find in the average Japanese home, according to the data we have collected over the past decade. Instead, mixing and matching Japanese- and western-style dishes has become the norm: a bowl of cream stew next to broiled fish, Japanese-style nimono with bread, milk or juice alongside onigiri (rice balls), and so on. Instead of the traditional ichijū sansai, many people now prefer to eat one single plate of food, even for dinner.

Over the one-week period during which each household participates in the study, non-traditional dishes like curry rice, ramen, fried rice, noodles, and pasta almost always pop up on the menu. For breakfast, people are now far more likely to have bread than rice.

When and why did Japanese people begin shifting away from washoku? A common view is that Japanese palates and preferences changed naturally when new types of food started to enter the country as the economy grew. But is this really the case?

In fact, from the mid-1950s into the 1960s there was a deliberate attempt to make the Japanese diet more “westernized.” The government and private corporations worked together to move people away from the traditional diet centered on rice, sweet potatoes, and beans. Instead they promoted a western-style bread-based diet rich in animal proteins and fat. Meat, milk, and eggs were pushed as the new ideal.

This reform took place in the context of the 1955 agricultural surplus commodity agreement, in which Japan agreed to accept surplus agricultural commodities from the United States. The United States had already set its sights on getting the Japanese to embrace a diet that would be advantageous to its agricultural policies.

At the time, Japan was eager to “catch up” with the West, and many people were enthusiastic about the idea of adopting a more western diet. The agreement simply gave incentive for the government and organizations like the Japan Dietetic Association to join hands in westernizing the Japanese diet. Many Japanese embraced the idea of transforming themselves from a small and weak defeated people into a bigger, stronger nation.

A case in point is the dietary improvement campaigns conducted by the Japan Food Culture Association (affiliated with the Ministry of Health and Welfare). Older people in Japan still remember the US-funded kitchen cars that traveled around the country from 1954 to 1960 spreading the gospel of a western-style diet. In 1963, a television commercial that ran repeatedly featured a song that went: “Not enough proteins.”

The fiscal 1962 White Paper on the National Lifestyle welcomed the increased consumption of meat, milk, and eggs shown in the annual Family Income and Expenditure Survey. The increased consumption of processed foods and a general move away from rice were also seen as signs of “a more sophisticated diet.” Massive campaigns promoted by the public and private sectors gradually led the Japanese to replace traditional meals with western-style ones.

Growing Up with Instant Foods in the 1960s

I believe that the rise of instant foods also played an important part in accelerating this shift.

In 1960, instant noodles became all the rage. Instant coffee and instant curry blocks also appeared around the same time.

These successes fueled the rapid growth of the processed food market. Processed food products enabled housewives to prepare “exotic” non-Japanese dishes like spaghetti, curry, and beef stew. Western-style and Chinese dishes quickly became a regular part of normal Japanese life. With the help of the new instant products, anyone could cook like an expert. Without them, western-style food would have taken much longer to become part of the Japanese diet.

Meanwhile, consumption of the traditional seasonings that once formed the basis of the Japanese taste, such as dried bonito, miso, and soy sauce, began to decline, according to data from the Family Income and Expenditure Survey. 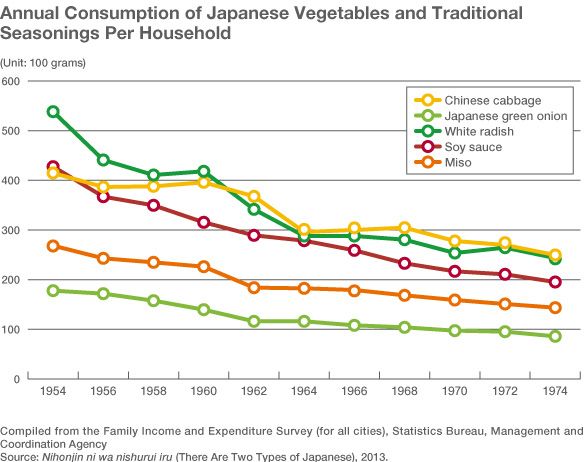 People who were born in or after 1960, when western-style dishes became prevalent in the Japanese kitchen, make up roughly 60 percent of the Japanese population. The oldest of them are now in their fifties. Members of this generation not only eat less washoku and prefer more western-style food than previous generations. Their repertoire of washoku dishes is also smaller, and when asked about to name the dishes they cook most often tend to name foreign dishes—commonly Italian, French, or “Asian.” Given that the practice of learning to cook anything at all at home is becoming less common, these people see washoku as more difficult and time-consuming to prepare than western-style dishes, which spread in Japan via simplified cooking methods.

Associated with the images of ofukuro no aji (comfort food, literally “mom’s taste”) and home-cooked food, washoku represents the epitome of a proper, well-balanced meal. The flipside of this is that it has increasingly been relegated to the status of food that people feel takes too much time and energy to prepare on a daily basis.

The irony is that washoku has been losing ground in the home in the age of convenience. It is precisely its image as homemade food, cooked-with-care, that has caused traditional washoku to lose out to western-style food in the Japanese home.

The decline of washoku in the home poses serious questions: What does home cooking signify for people today, and what are the real values of Japanese families when it comes to food and eating? The inclusion of washoku on the UNESCO list should provide us with food for thought on the future of our traditional cuisine.