Economy Mar 14, 2014
Softbank and Suntory Holdings are just two of the most prominent Japanese companies that have bought up major foreign corporations recently. What does this growing trend say about the overall condition of the Japanese economy?

A number of Japanese corporations have made headlines recently following mergers and acquisitions involving major foreign companies. In July 2013 communications giant Softbank paid $21.6 billion for Sprint Nextel Corporation, the third biggest mobile phone company in the United States. On January 13 this year, Suntory Holdings announced that it would acquire US spirits maker Beam, famous for the Jim Beam brand of bourbon, for $16 billion. In 2011, Takeda Pharmaceutical Company Limited bought the Zurich-based Nycomed for €9.6 billion, while in 2012 Daikin, a manufacturer of air conditioners, acquired Goodman Global, an American company, for $3.7 billion.

For Japanese companies facing a shrinking market and a declining population at home, buying up foreign companies is one of the few realistic growth scenarios still open to them.

Until recently, most Japanese companies were less than enthusiastic about acquiring foreign companies. Most foreign direct investment by Japanese companies involved relocation of production facilities overseas, which is quite different from simple acquisition of another company. Now that this shift of production facilities overseas has reached a certain level, the acquisition of foreign companies has the potential to help improve Japan’s deteriorating current account balance. But Japanese companies are used to a stable domestic market and tend to be conservative. At present, it remains unclear whether other companies will follow the lead of Softbank and Suntory and adopt a more positive overseas acquisitions strategy.

Trade Deficit Is Due to Structural Factors

As is well known, for most of the postwar period Japan has built its economy on the back of exports from its manufacturing industries. Thanks to the overwhelming international competitiveness of their products, Japanese manufacturing companies expanded confidently into export markets around the world, annually securing a trade surplus of more than $100 billion.

In the 1990s this was augmented by cumulative investment gains on foreign currency reserves, culminating in a situation in which Japan had a current account surplus approaching $250 billion.

Many people believe that the chief reason for the growing trade deficit was the increase in energy imports caused by the decision to shut down Japan’s nuclear power plants. In fact, this is not quite true. Energy-saving measures have been sufficient to deal with the loss of nuclear power, and in fact the country is not importing markedly more energy from overseas now than before the Fukushima Daiichi nuclear accident. The price that Japan is paying for its energy imports has indeed gone up—but this is because of the steep rise in the market price of liquid natural gas and crude oil. 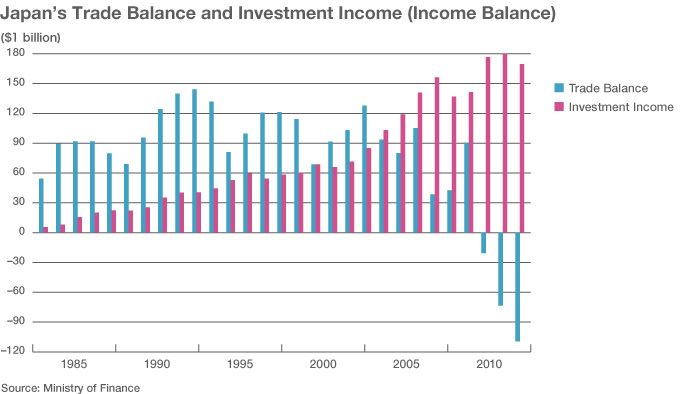 Also, in an increasingly globalized world economy, the increasing proportion of products manufactured overseas has also contributed to the export slowdown. Toyota, the country’s biggest automaker, already produces more than half its vehicles overseas. Meanwhile, electronics makers like Sony and Panasonic are importing more and more of their products and parts from elsewhere in Asia—a tendency that is likely to continue in the future. In other words, the trade deficit is due to structural factors and should be regarded as something that is most likely here to stay.

The shift to a current account deficit need not necessarily be a bad thing. But for a country like Japan, which has traditionally built its economic strategy on the assumption of an ever-expanding exports-driven surplus, such a sudden shift carries a number of disadvantages. A more gradual change would have been preferable by far.

Assuming that the trade deficit will inevitably continue to grow, the most effective method of reducing its effects is to increase investment income. At present, Japan has net external assets worth $3 trillion, including $1 trillion in foreign currency reserves. Many of these continue to be in US Federal Bonds and other financial products, a low-risk investment with correspondingly low returns.

By contrast, direct investment is riskier but offers higher returns. Simply converting a part of the portfolio now weighted disproportionately toward financial products would increase investment income substantially. Since the Lehmann Brothers crash and the fiscal crisis that followed, direct investment from Japan has been increasing. In 2011 Japanese companies conducted $80 billion of direct foreign investment. This increased to $100 billion in 2012. This is a marked increase from the 1990s, when the average figure was a mere $30 billion. And the most effective way of increasing direct foreign investment is to buy up a foreign company.

However, it is still too early to say whether more Japanese companies will look to acquire major foreign companies. The main reason for this is that direct investment in Japan by foreign companies is not keeping step with Japanese direct foreign investment abroad. At first glance, the two things may seem to have little to do with one another. But in fact they are closely related. In most cases, countries that are active in foreign direct investment tend to have open markets, and as a general rule, they also tend to attract a lot of investment from abroad.

At present, the Abe government is looking to ease regulations and reduce corporate taxes as part of its efforts to increase investment from overseas and stimulate the economy. However, some Japanese companies that benefit from the current restrictions are vehemently opposed to liberalization. And on the corporate taxes too, people have suggested that results of reform will be limited without a flattening out of the current system, with its myriad complexities and preferential treatments.

Japan is therefore not yet at a stage where it can be said definitely that increasing global direct investment is now firmly established as national policy. Nevertheless, it is likely that we will see a steady increase in acquisitions of foreign firms by cash-rich Japanese companies. At present, Japanese companies have cash holdings worth $1.7 trillion, but have not yet found an effective way to use them.

It will be interesting to watch how Japan’s big companies proceed in the years ahead, particularly those like communications giant NTT Docomo, whose overseas investment spending is currently on hold after it previously increased foreign direct investment to $10 billion, Fast Retailing Co., which remains highly dependent on the Japanese market despite the global success of its Uniqlo brand of clothing, and the supermarket leader Aeon, which is expanding aggressively into markets around Asia.