Nostalgia for the Pragmatic Conservatism of Tanaka Kakuei

Politics Economy May 14, 2014
Tanaka Kakuei is enjoying a resurgence in popularity, two decades following his death in 1993. The factors behind the revival are analyzed by J.F. Oberlin University Professor Hayano Tōru who covered the Shadow Shogun for 20 years as a political reporter.

December 2013 marked the twentieth anniversary of the passing of former Prime Minister Tanaka Kakuei. While no public memorial service was held in his honor, Kaku-san—as he is still affectionately remembered—remains a standard against which politicians are often judged. In fact, his popularity appears to be enjoying a resurgence, suggesting a certain nostalgia for the kind of “pragmatic conservatism” that he embodied and which seems sorely lacking in Japan’s political leaders today. 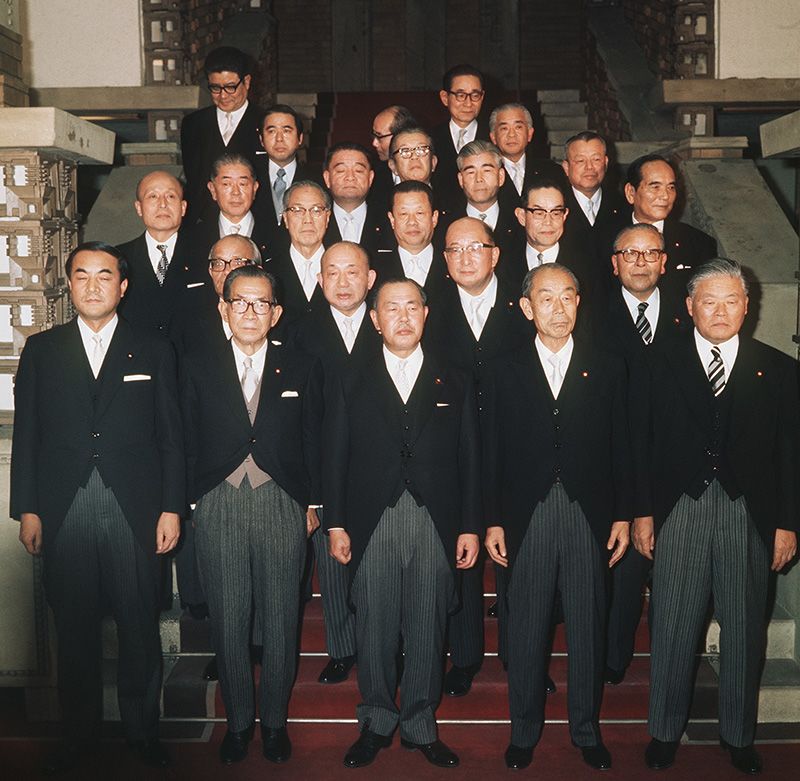 He was a man of the people, more often than not being referred to not by his surname but either as Kakuei or Kaku-san. In many ways, his rags-to-riches political career parallels Japan’s rise from the devastation of World War II to high growth and economic prosperity.

Born in 1918 in a poor rural village on the Sea of Japan side of Niigata Prefecture, he moved to Tokyo after graduating from higher elementary school at age 15, performing odd jobs before successfully launching an architectural firm. He entered politics following World War II and was elected to the House of Representatives, rising all the way to the top as prime minister in 1972. His meteoric ascent earned him the nickname Imataikō (modern-day taikō, or regent, after the sixteenth-century warrior Toyotomi Hideyoshi, who became known by this title after similarly rising from humble, rural origins to emerge as one of Japan’s most powerful generals).

He was adept at not only acquiring political power but also raising funds, prompting many to call him a plutocrat. He also accumulated great personal wealth, some of which may have been acquired illicitly and in the Lockheed bribery scandal he was arrested and indicted on charges of pocketing ¥500 million. Two lower courts found him guilty, but he died at the age of 75 in 1993 while appealing his case before the Supreme Court. Given his political career ended amid scandal and disgrace, why should he be enjoying a revival today?

Tanaka and Abe: A Study in Contrasts 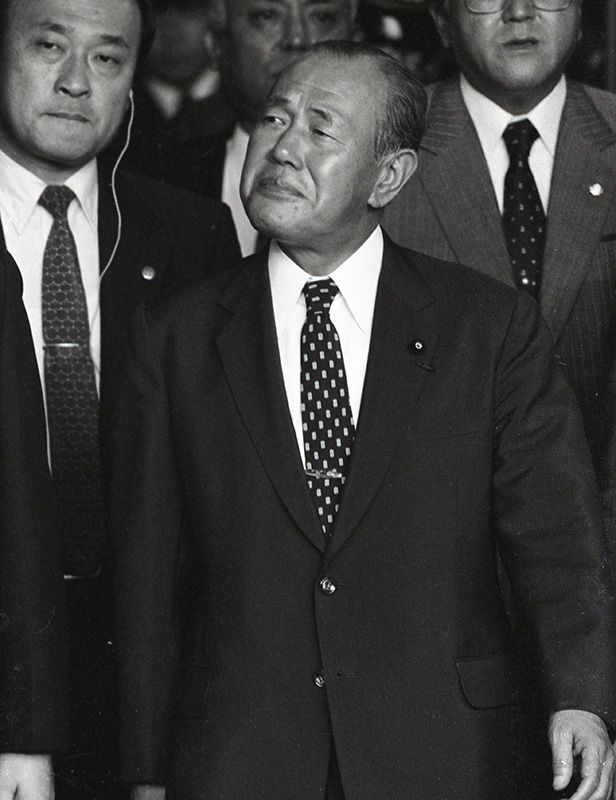 In October 1983, just after being handed a four-year sentence by the Tokyo District Court. (Photograph courtesy of Jiji Press Photo)

The immediate cause of the boom in popularity has been the publication of a number of books about him. One is by Satō Atsuko, the daughter of Tanaka’s lover, about her mother titled Aki: Tanaka Kakuei to ikita onna (Aki: The Woman Who Lived with Tanaka Kakuei). I also authored a book called Tanaka Kakuei: Sengo Nihon no kanashiki jigazō (Tanaka Kakuei: The Unadorned Self-Portrait of Postwar Japan) based on my coverage of the man at close quarters as a beat reporter. Another book is a memoir by his private secretary, transcribed by Mainichi Shimbun reporter Nakazawa Yūdai, titled Kakuei no oniwa-ban: Asaka Akira (Kakuei’s “Gatekeeper”: Asaka Akira). Others include Mori Seiho’s Tanaka Kakuei ni kieta yami-gane (The Dirty Money That Disappeared into Tanaka Kakuei) and Ōshita Eiji’s Tanaka Kakuei hiroku (The Secret Records of Tanaka Kakuei). The recent spate of “Kakuei books” may be an attempt—now that 20 years have passed since his death and his political influence has largely become history—to commit to writing both the honorable and dark sides of his legacy before they fade from memory.

But there may be another reason for the resurgence, namely, dissatisfaction, anxiety, or resistance toward the policies of Prime Minister Abe Shinzō, whose strident, confrontational political style contrasts sharply with the more accommodating, pragmatic approach of Tanaka Kakuei. There may thus be an element of nostalgia—a longing for the “good old days” when Kaku-san could be counted on to “fix” any problem.

What are some of the most salient differences between Tanaka and Abe? On the economic front, Tanaka focused on improving people’s lives, invariably starting off his campaign speeches with the declaration, “Politics is about livelihoods.” He believed that the role of politics was to drive the economy and make people more prosperous, and his speeches to eager listeners in rural areas would cite concrete plans for road construction or disaster countermeasures.

His trademark plan for remodeling the Japanese archipelago was, in essence, an attempt to narrow the wealth gap between urban and rural areas through infrastructure improvements, such as the building of new Shinkansen (bullet train) lines and expressways throughout the country. The plan sparked a speculation boom in real estate, which collapsed in the wake of the oil crises of the 1970s. But it also led to bold reforms aimed at more evenly redistributing the fruits of Japan’s high economic growth, such as exempting senior citizens from payment for medical treatment, increasing standard pension benefits to ¥50,000 per month, and raising the salaries of mandatory education schoolteachers 25% above those of ordinary civil servants.

The Abenomics plan of overcoming two decades of deflation, by contrast, is focused on improving corporate performance. It seeks to correct the overvalued yen and to boost stock prices through monetary easing, and, indeed, it has helped many companies post record profits. Abenomics seeks to trigger a virtuous circle of growth that would lead to higher employee salaries, but many smaller companies and those in outlying areas have yet to reap the benefits. They are the ones wishing that Kaku-san was still around to look after the poorer folk, not just the wealthy set sitting on corporate boards.

Normalization of Ties with Beijing 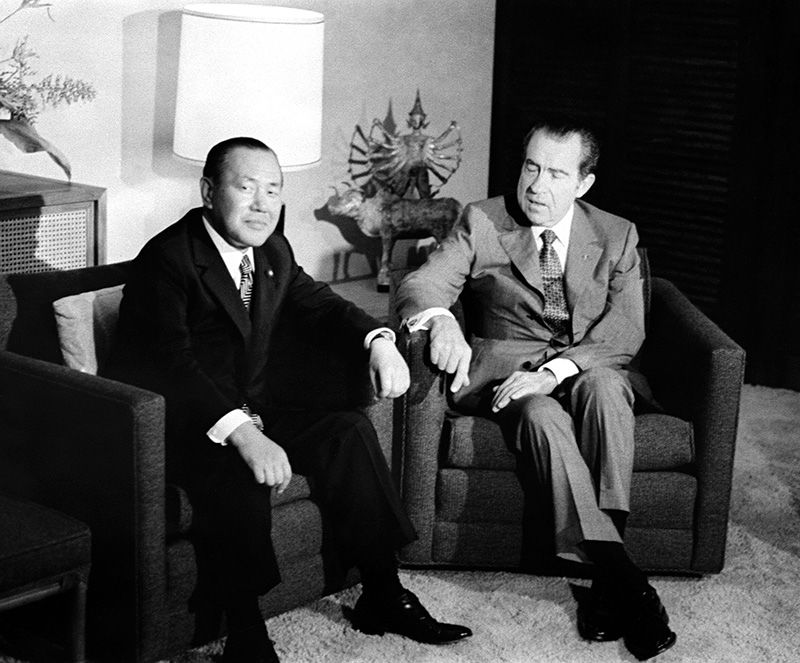 Tanaka meets with US President Richard Nixon in Hawaii in August 1972 prior to visiting China for normalization talks. (Photograph courtesy of Jiji Press Photo)

Tanaka and Abe also present a stark contrast in the realm of diplomacy. In September 1972, just two months after becoming prime minister, Tanaka, in a single stroke, negotiated a very difficult deal for normalization of ties with the People’s Republic of China—including Beijing’s renunciation of any claim for war reparations from World War II. Tanaka believed this was the perfect timing for such talks, as Beijing was feeling increasingly isolated due to its differences with Moscow. He also believed that the issue of wartime settlements needed to be resolved while the founding leaders of the People’s Republic—Mao Zedong and Zhou Enlai—were still in power. Tanaka’s instincts were on the mark. Had China insisted on reparations, they would no doubt have been for a vast sum. Only Mao and Zhou could have convinced their compatriots of the merits of renouncing such claims. At the end of a long negotiation session between Tanaka and Zhou, Mao joined the talks to seal the historical reconciliation by asking Tanaka, “Are you finished fighting now?”

A pair of pandas was subsequently presented to Ueno Zoo, and this became a symbol of strong Japan-Sino friendship. Bilateral trade steadily grew, and China developed into an economic power capable of repaying all official development assistance loans provided by Japan. Even after Tanaka’s arrest in the Lockheed scandal, Beijing continued to honor him as the man who “dug the well” to repair bilateral relations.

This contrasts sharply with the souring of relations today under Prime Minister Abe, not only with China but also South Korea. Territorial disputes over the Senkaku and Takeshima Islands have made bilateral summits all but impossible, and suspicions have deepened over Abe’s revisionist position on such historical issues as the Nanjing massacre and wartime “comfort women.” His December 2013 visit to Yasukuni Shrine, where Japan’s war dead, including Class A war criminals, are enshrined, infuriated China and South Korea—both of which suffered under Japan’s wartime aggressions.

Would Kaku-san have done things any differently if he were around today? During World War II, he was enlisted into the army and served in northeast China as a private. His main memories of the war were being beaten by his superiors without good reason, though, and he harbored no nostalgic feelings about the war. Being a resourceful politician, Tanaka would no doubt have been more sensitive about the feelings of the Chinese and Korean people and acted accordingly. History must not be used as a tool for trivialistic fault-finding or self-justification.

It seems that with the passing of East Asian leaders of Tanaka’s generation, the process of postwar repentance and reconciliation has faded from memory. This makes people all the more yearn for someone like Kaku-san who had the political stature to negotiate on even terms with the likes of Mao Zedong and Zhou Enlai.

I now receive many more requests to lecture about the man, thanks to the recent resurgence in his popularity. One of the points I emphasize in my presentations—and which often strikes a chord in my listeners—is that while he may have been tainted by scandal, he was nonetheless a stalwart defender of the postwar Constitution.

The 10-point policy platform he announced when he was running for LDP president includes a call to base Japan’s foreign policy on Article 9, rather than becoming a military power. His position on the pacifist clause, which renounces war as a sovereign right and the maintenance of war potential, was viewed positively by Chinese leaders and was one of the factors that facilitated the normalization process.

Since its inception in 1955, the LDP has sought to amend Article 9 and to revive the country’s armed forces, on the grounds that the pacifist Constitution was imposed on Japan by the Occupation authorities. On this point, Tanaka commented on a television program marking the twenty-fifth anniversary of the party’s founding that while the Occupation forces were indeed intent on keeping Japan weak, the Constitution and other laws of postwar Japan could not have been enforced or taken root had it not been for the wisdom of the Japanese people.

Thus, while appearing to pursue a constitutional amendment, the LDP has actually been content to live with the war-renouncing clause, which has allowed the country to focus its resources on economic growth, rather than on national security. Tanaka’s pacifism, again, was a pragmatic one, enabling the country to skimp on security costs. It was also a perfect match for the postwar era’s aversion to war and people’s desire for a more prosperous lifestyle.

Abe is less enthusiastic about the benefits of Article 9, labeling such thinking “mind control.” He is eager to alter the government’s interpretation of Article 9 and claim Japan’s sovereign right to collective self-defense, thus paving the way for a bigger role in addressing international security threats. His pacifist critics contend that this represents an attempt to shift Japan’s exclusively defense-oriented posture to one enabling participation in foreign wars and to relegate Article 9 to irrelevance.

The heightened tensions Abe points to are, in many respects, the product of his own confrontational political strategy. Tanaka would surely have stepped in to prevent the building up of such tensions with neighboring countries. Political leaders today, nearly 70 years since the end of World War II, seem less capable of keeping the big picture in mind in advancing their political agendas.

Perhaps owing to their formative bitter wartime experiences, prime ministers soon after the war—from Yoshida Shigeru and Kishi Nobusuke to Ikeda Hayato and Satō Eisaku—had an incomparably larger presence than their counterparts today. While he was among a generation of LDP leaders—including Fukuda Takeo, Ōhira Masayoshi, and Nakasone Yasuhiro—who were embroiled in intense intraparty rivalry, Tanaka was a man with a particularly big heart. His personal life was rich in drama, and he is remembered with great fondness.

There is no telling whether Kaku-san would actually be able to deal with the situation today any better. But the boom he is enjoying may be an indication that people are growing fundamentally uncomfortable with the direction Japanese politics is heading.

(Originally written in Japanese on March 27, 2014. Title photo: Tanaka at a press conference in July 1972, following his election as the twenty-seventh LDP president, prior to forming his first cabinet. Photo courtesy of Jiji Press)