Mongolia and Japan: Beyond Power Politics?

Politics Jun 20, 2014
For a country that barely registered on Japan's radar 25 years ago, Mongolia has been receiving a lot of attention of late, not only as the birthplace of all three reigning sumō grand champions but also as the broker of a potential breakthrough in Japan–North Korea relations. Historian Oka Hiroki puts Mongolia's evolving relationship with Japan and other regional powers in historical perspective.

For some reason the Mongols always seem to catch the Japanese by surprise. From the Japanese viewpoint, the thirteenth-century Mongol invasion materialized out of thin air, as did the more recent "invasion" of talented sumō wrestlers from Mongolia. Many here were equally surprised to learn that Mongolia had acted as an intermediary between Tokyo and Pyongyang regarding the abduction of Japanese citizens by North Korean agents in the 1970s and 1980s. 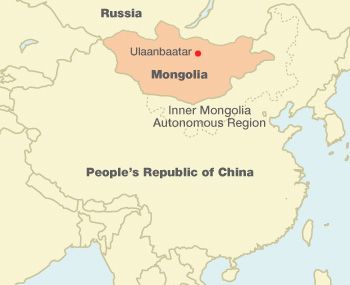 The emergence of Mongolia as a possible mediator in East Asia is one reason why the Japanese government has begun to place more importance on relations with that nation. But the driving factor behind this rapidly evolving relationship may not be Mongolia's potential value to Japan so much as Japan's potential value to Mongolia.

National security is by definition a matter of survival, the issue of paramount concern to every state. For Mongolia, the fundamental question has always been how to survive as a small, resource-poor nation (current population 2.7 million) sandwiched between two powerful giants, China and Russia. Ever since Outer Mongolia declared its independence from China over 100 years ago, Mongols have relied almost exclusively on one basic strategy, that of turning regional rivalries between much larger powers to their own advantage. At one time, Japan was one of the key players in this regional drama, vying directly with China and Russia for control of the area encompassing modern Mongolia. Then came World War II, the Cold War, and the collapse of the Soviet Union. How has Mongolia adapted to these events, and how does Japan fit into its security strategy today?

The Mongols' basic survival strategy came into play as early as 1911, when the nation took advantage of China's Xinhai Revolution to declare its independence under Bogd Gegeen Khan, the head of Tibetan Buddhism in Mongolia. Tapping into Czarist Russia's imperialist ambitions, the government of Bogd Khan secured a promise of Russian assistance in exchange for commercial privileges in a bilateral treaty signed in 1912.

After the 1917 Russian Revolution, Mongolia was occupied by Chinese forces seeking to regain lost territory and Russian White Guard forces fighting the Bolsheviks. The newly formed Mongolian People’s Party secured the backing of the Soviet government, and in 1921 the Mongolian People's Army and the Soviet Red Army defeated the Chinese and White Russian forces. In July 1921, a socialist state was established with Bogd Khan as head of state, though invested with limited powers. With the death of Bogd Khan in 1924, the country was renamed the Mongolian People’s Republic by the Great Khural (national assembly) and became a satellite state of the Soviet Union.

The Republic of China recognized the Mongolian People's Republic as an independent state in 1946, after World War II. Following the defeat of the Kuomintang and the birth of the People’s Republic of China in 1949, Beijing and Moscow embarked on a brief honeymoon, with the result that Mongolia enjoyed friendly ties with China during the 1950s. But relations between China and Mongolia deteriorated as tensions between the two communist giants mounted. The Mongolian People’s Republic gained admission to the United Nations as an independent state in 1961, though it remained a satellite state of the Soviet Union until 1990.

The High Cost of Russian Protection

On the face of it, the Mongols enjoyed some measure of success in their attempts to use great-power rivalries to further the cause of independence, but the costs of this strategy were high.

This policy continued under the early Soviet government. Then, having helped Mongolia eject the Chinese, the Soviet Union used the Mongolian People’s Revolutionary Party (as it was renamed in 1924) to export its communist revolution. In the 1930s, Stalinist purges carried out under Mongolia's Moscow-controlled one-party dictatorship resulted in the execution of tens of thousands, many on charges of spying for the Japanese.

The Price of Japanese Support

In Inner Mongolia, a frontier region of China that had never been fully integrated into the Chinese empire, Mongol separatists followed a similar strategy as they sought to turn the ambitions of Imperial Japan to their own pan-Mongolian ends. Ultimately, they, too, were to pay a heavy price for nominal independence under the protection of a major power.

Babuujab, a native of eastern Inner Mongolia who rose to the position of military commander under Bogd Khan’s regime, enlisted Japan's cooperation in the fight for Inner Mongolian autonomy after the governments of Russia, China, and Mongolia rejected the unification of Inner and Outer Mongolia in the 1915 Treaty of Kyakhta. This was the start of what came to be known as the second Mongolian independence movement.

In 1925, under the First United Front of the Kuomintang and the Communist Party of China, separatists in Inner Mongolia launched a revolt with the support of the Comintern and the Mongolian People's Republic. Although styled a revolution, the rebellion was oriented more to ethnic self-determination than to social transformation. When Japan's Kwantung Army invaded northeastern China in 1931 in a series of events known as the Manchurian Incident, some of the Inner Mongolian rebels allied themselves with the Japanese against the Chinese army. Once again, the aim was to harness Japanese power to gain Mongolian independence. The Inner Mongolian best known for his efforts to secure autonomy through collaboration with the Japanese was Prince Demchugdongrub, regarded by most historians as a puppet of Imperial Japan.

The Japanese puppet state of Manchukuo, founded in Manchuria in 1932, encompassed the eastern section of Inner Mongolia, an area the Japanese designated the Hsing’an (Xing’an) autonomous Mongol province. In 1936, with the backing of Manchukuo and Japan, Prince Demchugdongrub declared the independence of the remaining Mongol territories to the west, assuming leadership of the Mengjiang United Autonomous Government. Unfortunately, Mengjiang was never truly autonomous, let alone independent, and even the limited autonomy it enjoyed ended with Japan's defeat in World War II. Immediately after the war, regional leaders made a bid for unification with Outer Mongolia, but their hopes were quickly dashed. Even while designating Inner Mongolia an autonomous region, the Chinese government launched a brutal crackdown against the leaders of the separatist movement.

Notwithstanding the high price the Mongols paid for the assistance of major powers like Russia and Japan, it could be argued that their efforts bore fruit in the eventual emergence of a truly independent Mongol state, present-day Mongolia—so renamed in 1992, after the nation abandoned the Soviet model and adopted a multiparty presidential system. Because of this achievement, histories of Mongolia continue to treat the early leaders of the Mongol separatist movement as national heroes. Among those still honored is Khorloogiin Choibalsan, the Stalinist leader who oversaw the killing of thousands of Mongolian citizens in the purges of the 1930s and 1940s. To this day a statue of Choibalsan guards the entrance to the National University of Mongolia in Ulaanbaatar— not far from the National Library, where an image of Stalin stood until it was finally toppled in 1990.

The basic geopolitical conditions of Mongolia’s existence have not changed; it remains a small nation sandwiched between two giants, Russia and China. Today it enjoys friendly relations with China as well as Russia and pursues omnidirectional diplomacy, but it is searching for other powerful partners to enhance its security situation. The top candidates for this role are the United States and Japan. In a recent conversation with the author, a member of the Mongolian Academy of Sciences summed up the situation as follows: “Mongolia is looking to the United States for military security and to Japan for economic security.”

Of course, in today's post-imperialist world, Mongolia needs to offer new inducements for cooperation by highlighting its unique assets. Something that has come up time and again in my discussions with Mongolian scholars is the notion that Mongolia is uniquely positioned to act as an intermediary between Japan and Russia, given its long acquaintance with Russia and its understanding of Russian character. If we apply the same reasoning to North Korea, we begin to understand how Mongolia came to play the role of mediator in recent talks between Tokyo and Pyongyang concerning the abduction issue.

In the past, when the Mongols turned to Japan in their quest for independence or autonomy, there was always a mismatch between the two countries’ expectations of one another. To the Japanese, Mongolia was a country incapable of functioning independently, and so-called Mongolian independence was a sham, the product of self-interested Russian/Soviet machinations. Japan, following suit, treated Mongolia as a tool for advancing its own interests.

After a period of indifference, the Japanese have come to see Mongolia’s unique potential value as a mediator—aiding in the resolution of disputes with North Korea and other countries in the region—not to mention a supplier of natural gas and other resources. The question now is whether they can recognize and appreciate the kind of shared values that go deeper than immediate self-interest.

(Originally written in Japanese on May 13, 2014. Banner photo: Prime Minister Abe Shinzō gives a paperboard with the handprint of Mongolian sumō wrestler Hakuhō to President Elbegdorj of Mongolia in Ulaanbaatar on March 30, 2013. © Jiji Press.)