Science Technology Culture Mar 13, 2015
The Japanese word origami has long been part of the global lexicon, and this traditional paper-folding craft is now being applied to new uses in fields ranging from outer space to inside the human body.

The Origami Roots of the Honeycomb Core Panel

Origami, meaning “paper folding,” refers to the traditional art of making decorative objects of various sorts from a single sheet of Japanese paper (and to the objects themselves). The word, a compound of oru (to fold) and kami (paper), has been borrowed into English and other languages, and the art has fans around the world.

Left: The colorful folding paper decorations for the Tanabata festival are said to have inspired a typical manufacturing method for honeycomb core panels. Right: Honeycomb core structures can be seen in everyday uses like packaging. (Photos courtesy Hagiwara Ichirō.)

The techniques used in origami actually have a broad range of applications going far beyond making paper cranes and the like. Hagiwara Ichirō, a professor at Japan’s Organization for the Strategic Coordination of Research and Intellectual Properties, notes that the business uses arising from this art can be worth trillions of yen. It holds the key to a whole new field of innovation.

According to Hagiwara, engineers in Britain were inspired by origami when, in the years after World War II, they developed a widely adopted method for manufacturing honeycomb core panels for industrial use. Honeycomb cores are made by filling a flat space with short hexagonal tubes like the cells of a honeycomb. They are widely used in everyday items, such as cardboard packing materials. The Shinkansen bullet trains have aluminum honeycomb panels in their floors to damp vibrations. Similar panels are attached to the walls of rockets used to launch satellites, where they prevent the sonic vibrations produced by the roar of the idling engine from shaking the satellite apart.

It seems a bit ironic that this multi-trillion-yen technology for which origami provided the hint was commercialized not in Japan but in Britain. Professor Hagiwara goes so far as to call it “shameful” that Japanese engineers failed to take advantage of this traditional Japanese technique.

Hagiwara was originally a specialist in impact engineering, working at Nissan Motor in the field of collision research. He subsequently became a professor at Tokyo University of Technology, where he was responsible for collaborative engineering studies, a field that seeks to incorporate feedback from users, such as on the riding comfort of cars, into the product development process. But in 2002 he learned of the origami engineering initiative being pursued by Kyoto University’s Nojima Taketoshi (now a research fellow at the Meiji Institute for Advanced Study of Mathematical Sciences). Nojima had noted the lightness and strength of origami, along with its ability to be folded and unfolded, and he asserted that these qualities should be useful for industrial purposes. Hagiwara was attracted by this possibility, and he established an origami engineering research group of his own.

Hagiwara explains, “Feelings are important in collaborative engineering—for example, looking at the [spiral] arrangement of sunflower seeds and thinking it’s beautiful. And I believe that using beautiful things makes our brains more lively. When I heard Kyoto University Professor Nojima give a presentation about origami engineering in 2002, I thought, ‘This is it!’” 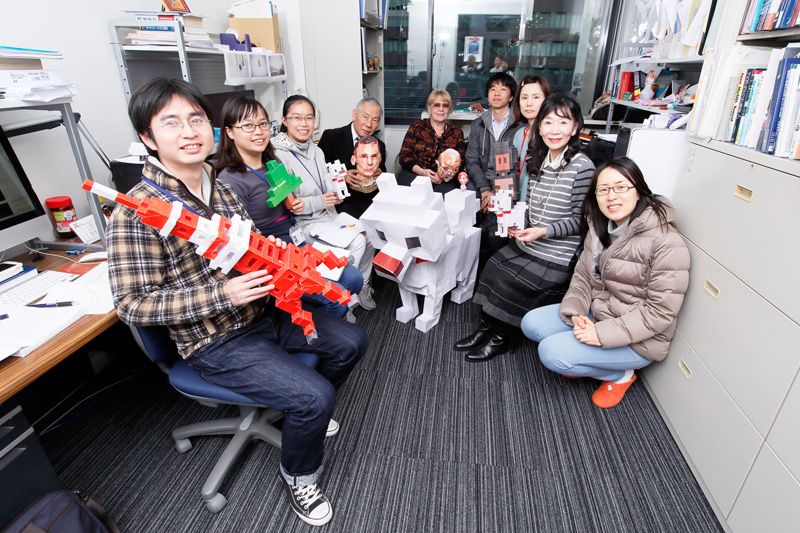 Meiji University Professor Hagiwara with some of the members of his team of 12 researchers from Japan, China, Russia, and Vietnam. (Photo by Yamada Shinji.)

Within Japan, origami still tends to be seen just as a traditional art, but Hagiwara notes that origami technology is drawing great attention from around the world. Nearly 300 people from 30 countries attended the Sixth International Meeting on Origami in Science, Mathematics, and Education held in Tokyo in August 2014.

One factor that has contributed to the growth of interest since the 1990s is the rise of “computational origami,” supported by the emergence of software applications to assist in design and simulation. In 2012 the US National Science Foundation provided $16 million to launch an origami technology research project. And innovative studies are progressing, as seen in an article on making self-folding robots with shape-memory polymer sheets published by a group including Eric Demaine, a professor of computer science and engineering at the Massachusetts Institute of Technology (Science, August 8, 2014). 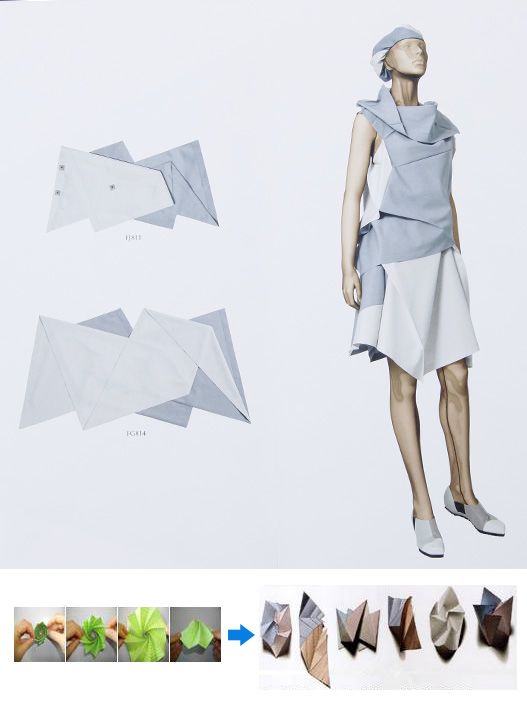 A dress designed by Issey Miyake, folded using an origami technique called makitori, or “coiling” (below). (Photo by Yamada Shinji [above]; courtesy Hagiwara Ichirō [below].)

Various initiatives to study and use origami are also seen in Japan. For example, world-famous fashion designer Issey Miyake has collaborated with Nojima to produce origami-inspired garments. These make use of origami coiling and conical folding models developed by Nojima, who found a hint in the mechanism by which morning glory buds spiral open into flowers.

The self-deploying structures seen in the world of nature, such as in shells, insect wings, and sunflower seed arrays, offer interesting topics of study for researchers in the fields of aerospace and mechanical engineering. In November 2014 the Proceedings of the National Academy of Science published an article by University of Tokyo Professor Saitō Kazuya and others titled “Asymmetric hindwing foldings in rove beetles”; it is hoped that further studies will lead to applications in areas ranging from deployment mechanisms for satellite solar battery paddles to daily-use articles like umbrellas and folding fans.

From Beverage Cans to Blood Vessels

The “Miura fold” on the left, created by Miura Kōryō, professor emeritus at the Japan Aerospace Exploration Agency (JAXA), unfolds and refolds simply by being pulled and pushed from opposite corners. Meanwhile, the diamond-cut pattern, which also originated in Miura’s space engineering research, is being used in beverage cans like the one on the right.

The “Miura fold” is well known for its use in the solar battery panels of satellites. On the everyday level, meanwhile, the “Yoshimura pattern” has become a familiar sight in Japan, where its diamond-shaped shallow folds are used on coffee and alcoholic beverage cans. Other everyday applications are seen in the designs of plastic beverage bottles that are easily collapsible when emptied and in the folding of automobile airbags. Research is underway on a variety of further applications, such as use of folded wood and steel panels in building construction,  artificial blood vessels (stent grafts) made flexible with folding techniques, and an origami model of the human lung to assist in investigating pulmonary diseases. 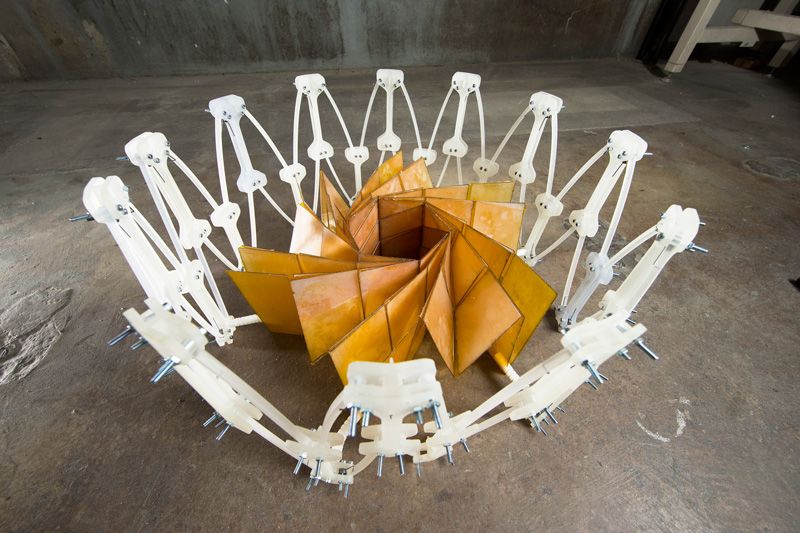 The US National Aeronautics and Space Administration’s Jet Propulsion Laboratory is working with researchers at Brigham Young University to develop a solar panel array that folds up like origami and deploys to 10 times its folded size. (Photo of prototype, courtesy BYU/NASA.) 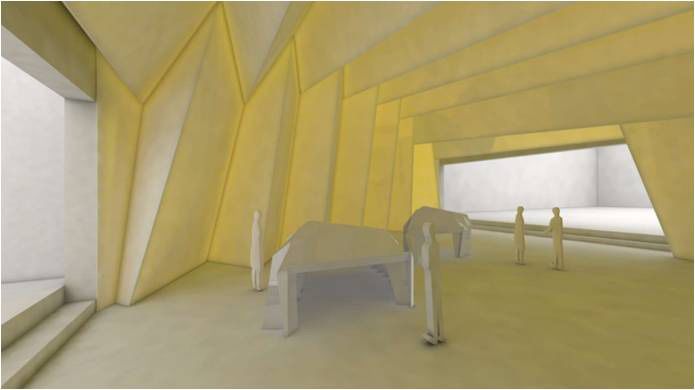 Japan’s origami technology is thus attracting attention in a wide range of fields, including medicine, transportation, construction, and aerospace. But so far the honeycomb core is said to be the only application that has led to mass production.

In November 2014 the University of Tokyo’s Saitō succeeded in demonstrating a new method for producing honeycomb cores. Up to now they have been made using multiple layers, but Saitō’s new method uses a single sheet with slits to produce the desired three-dimensional shape. This method facilitates the production of stronger, stiffer cores. Production costs are lower, and the method also makes it possible to produce curved panels, which are difficult to make using the traditional method. 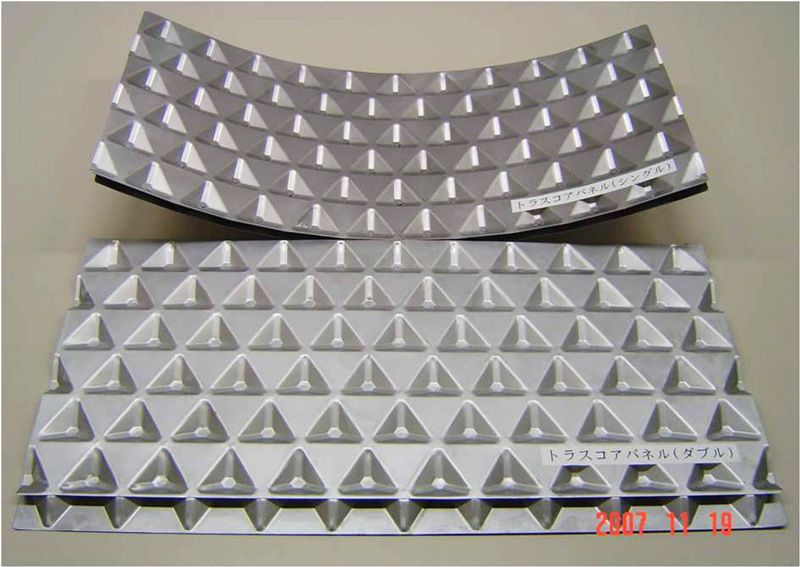 The truss core panels developed by Hagiwara’s team can be machine-pressed and curved; they are cheap to make and fire-resistant. (Photo courtesy Hagiwara Ichirō.)

Meanwhile, Hagiwara’s team at Meiji University has developed a “truss core” panel. This can be produced in curved shapes, and it is fire-resistant. When two panels are sandwiched together with the convex and concave parts reversed, the resulting combined panel has seven to eight times more stiffness than a flat sheet. Furthermore, production costs are said to be only about a third of those for regular honeycomb cores. The team is currently looking at a variety of possible applications, such as in solar panel heliostats, lithium battery boxes, and train floor assemblies.

Hagiwara’s team is also working on development of what they call the “origami 3D printer.” Unlike an ordinary 3D printer, which produces objects by adding layers, their system will print out an origami deployment chart based on 3D data. This should make it possible to manufacture products in the future without using expensive molds. The team is also considering development of industrial robots for welding and folding, so that their system will be able to produce 3D structures cost-efficiently using metal, plastic, and other materials.

Origami is an art with a long tradition, but origami engineering is still a young field of study. It will be interesting to see what sort of innovative concepts and technologies will emerge from the work now underway within Japan and around the world.