Next Up: The Wearable Era?

Economy Science Technology Mar 25, 2015
Amid the arrival of the Apple Watch and a new Microsoft operating system offering access to “augmented reality,” Japanese firms are envisioning new prospects for wearable electronic devices. A longtime advocate discusses these devices and explains why they may be the next big thing.

Google: Once More through the Looking Glass

In January Google abruptly halted individual sales of the Google Glass, its yet-to-be perfected eyeglass-style electronic device, which had been available in a trial version. Lightweight, much smaller than comparable gadgets, and equipped to perform advanced functions, the Google Glass had been expected to gain a secure foothold in the market for head-mounted devices.

Problems soon emerged, however. The Glass’s processor gave off too much heat and its battery ran out of power too quickly. There weren’t enough dazzling applications. The device, which is equipped with a miniature camera, made its wearers look dorky and vaguely ridiculous, and people around them objected to being filmed without their consent. At one time you might see a few Google Glass wearers at an electronics trade show in the United States or at an academic conference, but by mid-2014 they had virtually disappeared. The Glass had lost its shine. On top of that, Google encountered problems with processor supplies and had to account to its shareholders for the huge sums it had invested in research and development, all of which led it to stop selling the Google Glass to the general public.

Apart from an ongoing effort to develop industrial applications for the device, Google is rethinking its strategy for the Glass project, which has been moved into a separate division ultimately overseen by Tony Fadell, head of the Google subsidiary Nest Labs. Many observers view the Google Glass saga in a negative light, but I see it differently. It was clear from the start that developing wearable devices would be difficult, so the emergence of problems and the need to revise strategy are to be expected.

In Fadell, who displayed a deft touch in helping to launch the iPod during his tenure with Apple, Google is playing its ace in the hole. Among his considerable strengths is the ability to draw on Nest’s resources and expertise in developing sophisticated, Internet-connected household devices, especially the security-camera system known as Dropcam. Fadell can be expected to resolve the existing problems quickly and come up with an appealing new camera-equipped head-mounted device in short order.

Shooting for the Head

Meanwhile, as if to emphasize that the industry still has high hopes for wearable devices, Microsoft has chosen virtually the same moment to unveil its own eyeglass-style gadget, called the HoloLens. This device, which has transparent lenses, is designed to immerse the wearer in “augmented reality”—the real world plus holograms. With all the advanced spatial-recognition and image-processing technology at Microsoft’s disposal, one would expect the HoloLens to deliver a richly immersive experience for entertainment applications, three-dimensional modeling, and the like. The fact that Microsoft is launching such a major initiative is a momentous development for the wearable-device field and one that should have positive repercussions. 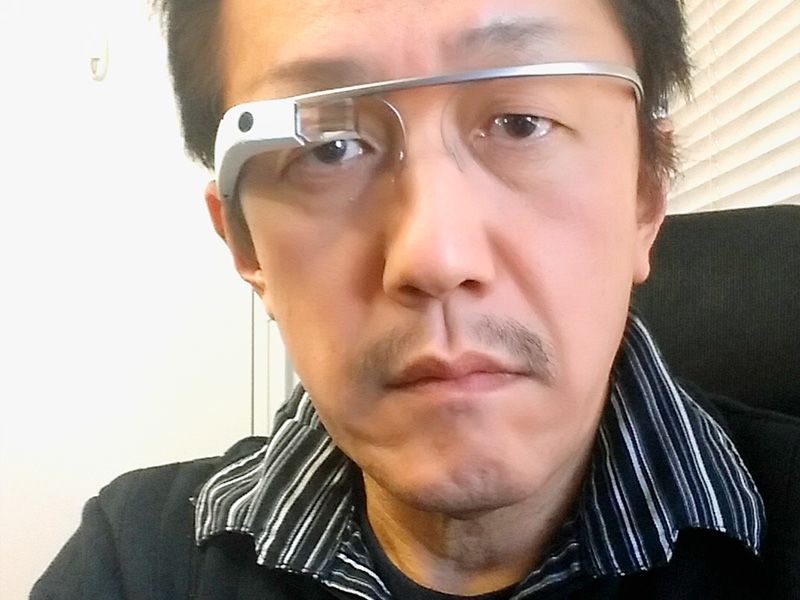 The author wearing the Google Glass, a device that can display information within a portion of the wearer’s field of vision. The author has been using such devices on a daily basis for the past 14 years. (© Tsukamoto Masahiko.)

In recent years the list of companies developing or producing head-mounted devices has come to include the American firms Vuzix, Recon, Osterhout Design Group, and Meta; the French firm Optinvent and the Italian firm GlassUp; and the Japanese firms Epson, Sony, Brother, Westunitis, and Brilliantservice. Major Japanese electronics manufacturers Hitachi, Toshiba, and Fujitsu have announced plans to develop comparable devices for industrial use.

The heightened hopes fueled by the arrival of the ultra-compact Google Glass, with its advanced functions and sophisticated technology, have created a beneficial ripple effect throughout the field; Vuzix, for example, is now listed on the NASDAQ stock exchange. This area of endeavor is finally starting to attract worldwide attention and generate widespread interest. Competition is heating up, with companies around the world exploring new types of applications and poring over specifications and configurations trying to find common ground. The year 2015 is apt to be a major turning point in this regard.

All Eyes on Apple’s Watch

Apple recently announced that a new product called the Apple Watch will officially go on sale in nine countries around the world, including Japan, on April 24. Rumors that Apple was coming out with a watch (originally expected to be called the iWatch) started circulating in late 2012. Since then any number of companies, including some American startups, have begun selling “smart” watches equipped with touch screens, acceleration sensors, and wireless communication capabilities.

In March 2014 Google introduced an operating system called Android Wear, designed for use with these new devices, and electronics makers including Samsung, LG, Motorola, ASUS, and Sony started selling watches compatible with the new system. While their principal feature is the ability to relay messages from mobile phones, they can also be set up to relay spoken instructions, record and manage input reflecting the wearer’s physical condition, and perform other functions. Sales of Android Wear–compatible watches have yet to reach the one-million mark, however, and the search continues for functions that would make them truly useful.

The Apple Watch seems to be reaching a bit higher. It’s available in a variety of designs, it’s powered by a new processor that promises greater practical utility, and it offers access to a powerful health-management program called HealthKit. To some extent, at least, it represents a promising departure from comparable devices of the past, but opinion is divided as to whether its functions and design will suffice to make the Apple Watch a hit. Until it actually goes on the market, that remains to be seen. The competition will be keeping a close eye on Apple Watch sales, which are sure to be seen as a crucial indicator of the future prospects for watch-type devices.

In addition to eyeglass-type and watch-type devices, all kinds of wearable gadgets have gone on the market in the past year or two, attached to or embedded in caps, rings, pendants, earphones, shirts, chest straps, shoes, and adhesive pads. Most are designed for specific uses, with an emphasis on practical considerations such as battery life and wearability.

New markets are already developing for wearable devices from a number of makers, including heart-rate-monitor chest straps for athletes, noise-cancelling hearing aids, devices that monitor the severity of head impact incurred by athletes playing contact sports, and devices that monitor exposure to ultraviolet light. As more of these newly conceived gadgets appear on the scene, new product categories are apt to emerge.

Ever since computers first arrived on the scene they have grown steadily smaller and increasingly powerful, and the ways they have been used have greatly changed. I regard wearable devices as the next stage in this sequence, as we inevitably progress beyond mobile phones and laptop computers. Many people are dismissive of the Google Glass, Apple Watch, and wearable technology in general, on the grounds that no one would want to wear such a thing, but I think that attitude reflects a lack of imagination. Thirty years ago people who were similarly dismissive of early mobile phones, cumbersome as they were, couldn’t imagine how popular such devices would be today.

However one feels about it, it’s clear that a great many wearable products are on the way and will continue to be a hot topic at trade shows and elsewhere. This will generate a host of business opportunities and might even spawn the kind of blockbuster success stories that became possible with the arrival of the Internet.

In this field the one true essential is continuity; sustained use of these devices will yield considerable knowledge and enable people to find beneficial uses for them. I have been an advocate for wearable devices for over a decade, having used them in my own daily life for the past 14 years. Japanese businesses have long specialized in turning out conveniently compact, innovative devices. What’s needed now is sustained, constructive effort.