Science Technology Jan 7, 2016
On December 7, 2015, the Akatsuki probe entered into orbit around Venus, five years after its first, failed attempt. The probe was launched by JAXA, the Japan Aerospace Exploration Agency, in 2010, a year when the successful return of Hayabusa from its mission to gather asteroid dust changed the attitude of the Japanese public toward space exploration.

NASA’s crewed Apollo Program missions, from Apollo 7 to Apollo 17, were all successful in various ways. Neil Armstrong’s “one giant leap for mankind” on the surface of the moon during the Apollo 11 mission was instant history and unforgettable. On the other hand, the drama of the Apollo 13 mission, when instrument failure forced the lunar landing to be abandoned, lay in how close it came to disaster before the astronauts safely returned to Earth. The original recording of its descent and later re-creation on screen in the eponymous film starring Tom Hanks have helped to fix the story in people’s memories.

By contrast, the other missions are not so memorable, despite the further successful moon landings, spacewalks, and long-term stays in orbit. One could say that they have been forgotten by the general public perhaps because their success was achieved so smoothly.

On December 7, Japan’s Akatsuki probe finally entered the orbit of Venus; the insertion was found to have been successful two days later. Akatsuki, meaning “Dawn,” was initially launched on an H-IIA rocket in 2010, but engine failure meant that its first attempt to orbit Earth’s neighbor came to nothing. Five years later it got a second chance, allowing Japan to follow the former Soviet Union, the United States, and Europe in getting a closer look at Venus. It is the first Japanese probe to orbit another planet.

The year 2010 having been a momentous one for the nation’s space program, many in Japan may not remember the Akatsuki launch on May 21. They must, however, recall the reentry into Earth’s atmosphere of the Hayabusa probe three weeks later on June 13. The Hayabusa capsule, which had completed a mission to gather dust from an asteroid, landed in the Australian outback, where it was recovered by a team of space scientists. The reentry itself was live-streamed in Japan on Ustream and Niconico, as well as by universities. Shōchiku, Tōei, and 20th Century Fox all produced films about Hayabusa and its unprecedented feat as the space program enjoyed an unusual boom. Under these circumstances, the attempt in December that year to get the Akatsuki into a Venus orbit caused unexpected interest, even though it failed.

The probe did not simply drift aimlessly through space in the five years that followed. Although its controls were damaged, its cameras and other observational equipment were still in working order, so it was able to gather scientific data while following an altered orbit with the aim of making a second attempt. Taking advantage of its positioning between the sun and Venus in March 2011, it was used to complete photometric observations of the planet. Then in June 2011, with the sun between Earth and Akatsuki, it transmitted radio waves to Earth with an ultrastable oscillator, obtaining data on how the waves were affected by plasma and solar winds emitted by the sun. The device was originally built for observing Venus, but was also fit for this purpose.

Even so, the five years spent voyaging through the solar system have taken their toll on Akatsuki. Its unplanned approach toward the sun exposed its equipment to high temperatures and there is no guarantee that these devices have not been damaged. Its main thrusters for inserting the probe into orbit were damaged five years ago and it now has to rely on smaller thrusters for adjusting its position. With these restraints, entering the orbit of Venus was like threading a needle. 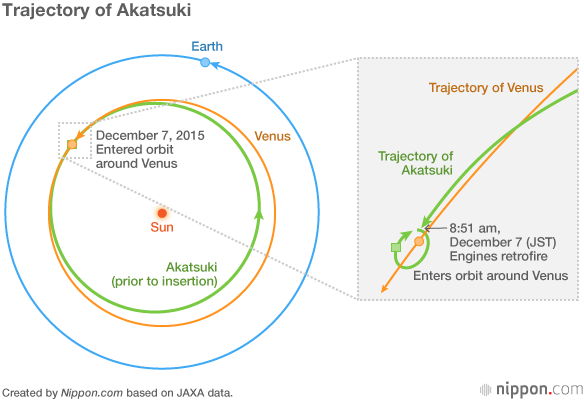 The Importance of Continuity 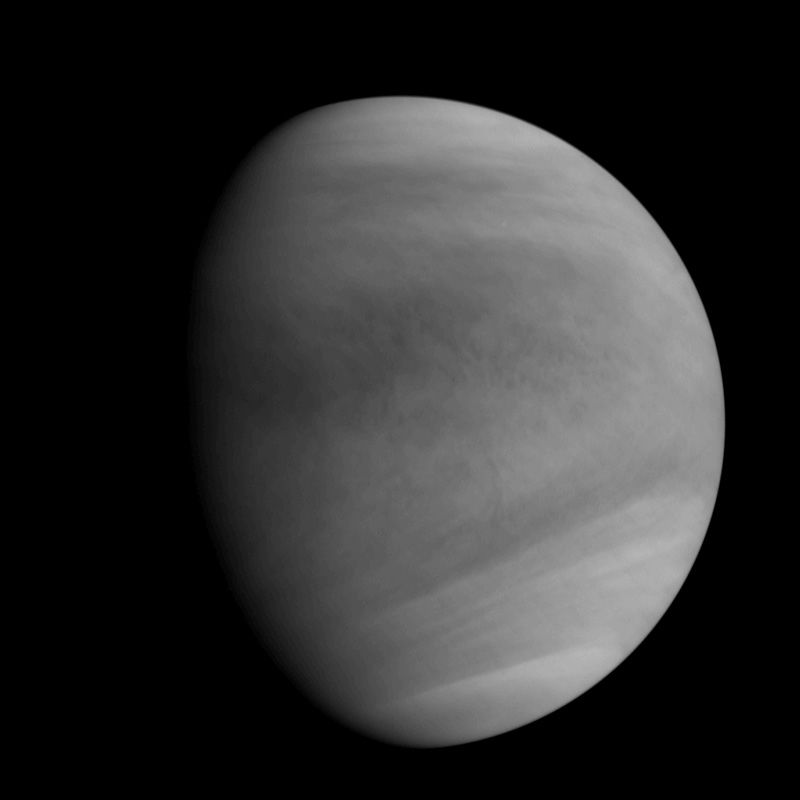 Akatsuki took this picture of Venus at 2:19 pm on December 7 (JST) from an altitude of 72,000 kilometers. (Photo provided by JAXA.)

The time lag between Earth and probes in space makes them particularly difficult to control. With machines of such complexity, problems caused by human error are also expected to some degree. These constraints mean that rapid decisions have to be made about whether it is possible to complete an objective—and, if not, whether an alternative objective can be completed. Hayabusa is a case in point. The mission faced endless difficulties, but each time the members of the operating team used all their knowledge to get it back on track, ultimately bringing the capsule back for its stirring return to Earth.

From another perspective, there was an undeniable need to tackle the design faults in the Hayabusa mission that led to the misfiring of the probe’s engine, problems with the sampling equipment, and the failure to deploy the MINERVA (Micro/Nano Experimental Robot Vehicle for Asteroid) rover. The lessons learned in the course of dealing with these issues must be applied to future design as an essential part of pushing development forward. A sense of project continuity is required so that young researchers and technicians, including graduate students, can build up and carry over experience from the design to the operational stage and decision-making skills honed through meeting any problems that occur. As the time between projects stretches out, though, it is difficult to acquire the abilities gained from actually working on a mission. Unfortunately, budgets are limited and space research has to carry on regardless.

Success Now a Matter of Course

Around two weeks before Akatsuki achieved orbit, an H-IIA rocket carrying a communications and broadcast satellite for Telstar of Canada was launched. It was the first time Japan had turned its space technology to business purposes by carrying another country’s commercial satellite. The rocket’s second stage LE-5B engine also used unprecedented re-ignition technologies, which have a similar effect to hitting the gas in a car to climb a slope after coasting down a straight road. This allows the rocket to travel much farther through space, where there are no “gas stations,” and deliver satellites much closer to a stable orbit. The launch was very significant for Japan’s space business, but as a smoothly executed success, it did not attract much attention.

The Selene lunar orbiter popularly known as Kaguya was launched four years after Hayabusa, completing an almost perfect mission. It too was largely ignored as a routine success. It is ironic then that the recovery efforts for Hayabusa were highly praised, resulting as they did from problems that arose during the mission.

The overshadowing of Kaguya by the Hayabusa story and the lack of interest in the Telstar launch may not necessarily be bad developments, although they must be vexing for those involved in space exploration. Japan regularly carries out routine launches—everything from probes and orbiters to cargo ships for the International Space Station—and individual projects are quickly forgotten. Now that smooth successes have become expected, the once regular failed launches and fruitless efforts to get satellites into orbit are a rarity. The media no longer grumbles about the waste of taxpayers’ money on equipment that ends up in the sea or as useless space junk.

A Spirit of Tolerance

Apollo 13 did not complete its objective of landing on the moon, but it was still regarded as a “successful failure.” President Richard Nixon praised the crew as well as the efforts of the ground controllers who supported them on their return, awarding them the Medal of Freedom. The mission seems to have changed the thinking of American society and how people viewed space exploration.

Japan’s investigation of Venus, our “morning star” and “evening star,” will soon begin. Akatsuki, however, only has a design lifespan of four and a half years, and has sustained damage. It will soldier on until it loses its remaining strength. If it meets some dramatic end, it may win people’s affection even if it cannot complete its initial mission. On the other hand, if it completes its mission and then one day communications from the probe quietly cease, this will be another expected success, after which Akatsuki may well be forgotten. 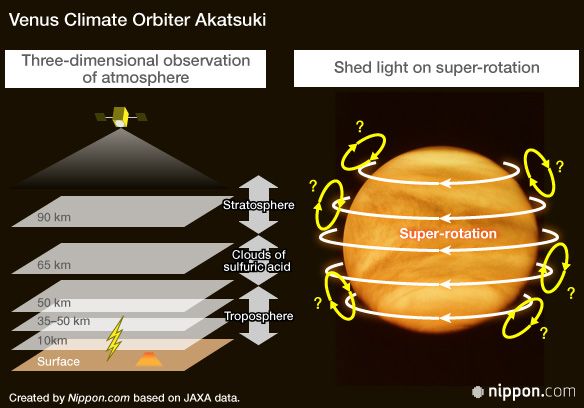 It remains to be seen what will happen. The story of Hayabusa in 2010, however—the year when Akatsuki was launched—was one that stirred people’s hearts, despite the mission’s many failures, and one that seems to have fostered a spirit of tolerance in Japan for the space program when it battles on through difficulties and errors. It could be said that this tolerance spurred on Akatsuki’s successful second attempt.