Economy Jan 3, 2017
Honda has begun taking orders for the new NSX in Japan for the first time in 10 years. While the original NSX was produced in Japan, this second-generation model is built to order at a specialized manufacturing facility in the United States, the NSX’s largest market. The development and production chiefs are both non-Japanese engineers who carry on the Honda spirit.

Honda announced a fully revamped second generation model of its NSX luxury sports car and began taking orders in Japan on August 25, 2016. The NSX, originally launched in 1990, is being revived about 10 years after production of the first-generation model ceased. Speaking on Honda’s aims in bringing back the NSX, President Hachigō Takahiro stated: “The joy of driving is an enduring theme at Honda, which we pursue in every age. The NSX does this and will lead to strengthening of the brand.”

The original NSX was developed and produced in Japan. The new edition of this supercar, in contrast, was developed by a joint Japanese-American team and is produced in the United States—something one may expect from a company like Honda, an early adopter of globalization in the automobile industry. The new model comes in two versions, a 3.5-liter, twin-turbo V6 gasoline engine and the HV, a hybrid vehicle that combines the engine with three motors. It has maximum power of 581 horsepower and maximum speed of 307 kilometers per hour (American specifications), providing same-level performance as its assumed competitors, the Audi R8 and the turbo Porsche 911 from Germany. The price in Japan is ¥23.7 million, also on a par with competing vehicles. 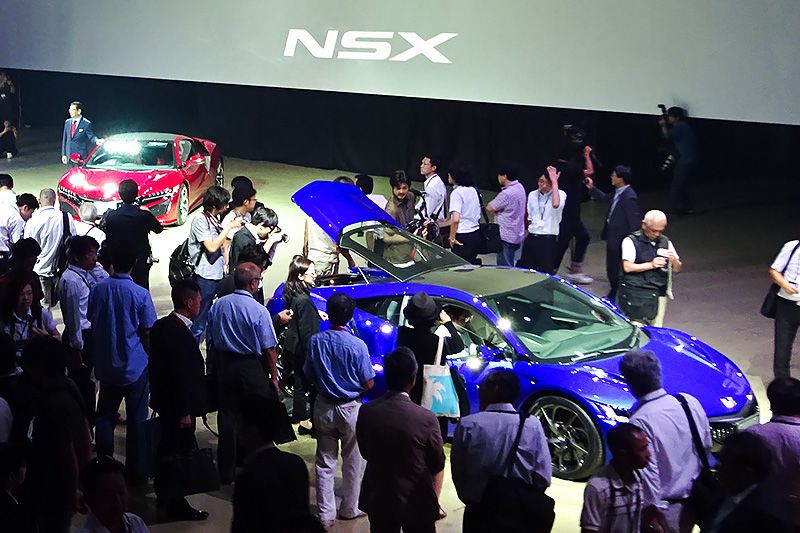 At the NSX launch event held at Tokyo Big Sight in August 2016.

The NSX HV, which adds two motors for the front drive and one motor for the rear drive, is a unique vehicle decidedly different from competing gasoline engine models. The motors on the NSX HV, in addition to providing propulsive force, are also used in steering control, refining performance and making the car extremely responsive to the driver’s movements. As a hybrid, it also beats rivals in fuel efficiency and environmental performance.

The company plans to sell 100 units a year in Japan, with deliveries to customers starting in February 2017. In North America, where demand is expected to be the greatest, it is being marketed as the luxury brand “Acura NSX,” with projected annual sales of 800 units. Deliveries started in June 2016. The first-generation NSX sold more than 18,000 units over 16 years, over half of them in North America—a key reason why the main development and production activities were moved to the United States. Honda plans to sell 6,000 units of the new model in the first three years in more than 50 countries worldwide. China, where the original NSX was not sold, is a promising market new market.

Non-Japanese Engineers in Charge of Development

Guests at the NSX launch event in Tokyo witnessed an unprecedented scene for a Japanese automaker: at President Hachigō’s introduction, two non-Japanese development and production engineers came to the stage for a presentation. The joint Japanese-American team responsible for developing the NSX was led by Ted Klaus of Honda R&D Americas, while the person responsible for production, Clement D’Souza, heads operations at the Performance Manufacturing Center in Ohio, a specialized manufacturing plant for the NSX. 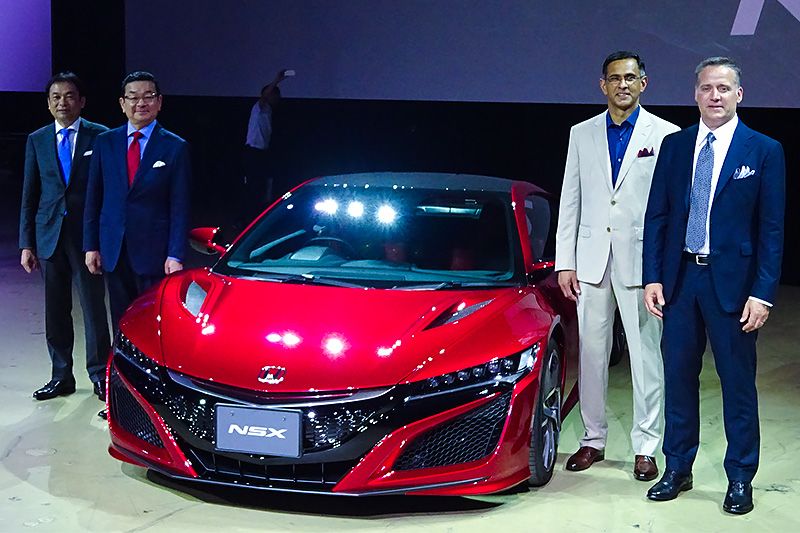 Japanese automakers have been setting up manufacturing plants in Western countries and throughout Asia for many years, but today they are also locating research and development operations in those countries. Locally hired engineers are being trained and given greater opportunities to participate in vehicle development and production technology, one reason being that local people are best positioned to develop vehicles that respond to the needs of each region.

Even so, it is unheard of for a Japanese automaker to entrust development responsibility for a strategic and global model like the NSX to a non-Japanese engineer. America-born Klaus, who was appointed chief developer in 2011 when the project was begun, is a veteran chassis developer who has been involved in the creation of many of the core Acura models for the North American market.

Carrying On the Honda Spirit

Klaus first encountered the NSX at the Detroit Motor Show in January 1990, where the original model was exhibited. “I thought, ‘that’s the kind of car I want to make,’ and began working at a Honda research center nine months later,” he says. After 20 years, being appointed development leader was the realization of his dream.

The brand-new specialized manufacturing plant for the NSX was built on the grounds of a mass-production plant in Ohio. The facility employs about 110 skilled workers who may rightly be called master craftsmen, selected from among the 10,000 employees working at the larger factory. D’Souza, who runs the operation of the special plant, was born in India and began working at Honda of America Manufacturing in 1989. Recently he has also directed production startup for the Accord, Honda’s flagship model in the USA.

Something the men have in common is two years spent in Japan, where they worked at Honda’s Automobile R&D Center in Tochigi Prefecture. “Observing Honda plants in all parts of Japan has been a great asset,” says D’Souza, for whom experiencing the “Honda Spirit” in the company’s home country was a key aspect in leading his career to where it is today. Of course, one of the reasons that the two men were given this opportunity for “Japan study” was that they were elite engineers in the company’s American subsidiaries.

US Move a Chance for Great Progress at Honda

Honda began American production in the state of Ohio in 1982. It was ahead of other Japanese automakers in taking the plunge and setting up production operations in the home of the mass-produced automobile, at a time when Japanese cars did not have a big presence there. This was an opportunity for Honda, the automaker that got the latest start in Japan, to make significant strides toward becoming a major player in the Japanese auto industry, alongside Toyota and Nissan.

In the more than 30 years since that time, the company has developed personnel who can lead joint teams in conjunction with the Japanese headquarters. At the launch event in Tokyo, Klaus enthused: “I was able to take the development of the NSX forward thanks to the help and opportunities I’ve received ever since joining the company”—a message that could be seen as a great compliment to his colleagues at Honda. In Japan, the NSX is marketed with the phrase “Only at Honda.” This is something that could be said of the firm’s global development and production system as well.