Economy Dec 9, 2016
CEATEC Japan, Asia’s largest IT and electronics trade fair, has shifted its focus to the Internet of Things. The author examines the backdrop to this change and uses the 2016 trade fair as a springboard for analyzing the strategies of Japan’s major electronics firms.

CEATEC Japan 2016, a trade fair of the electronics industry, was held from October 4 to 7 at Makuhari Messe, a convention center located in the city of Chiba, 40 kilometers east of central Tokyo. CEATEC 2015, the sixteenth to be held since the exhibition was launched in 2000, attracted the smallest number of attendees and exhibitors, raising doubts about its relevance. CEATEC 2016 was thus refashioned from a general IT and electronics trade fair into one centering on cyber physical systems and the Internet of things. Thanks to the shift in focus, exhibitions by 648 companies and organizations (531 in 2015) attracted 145,180 people (133,048 in 2015) to the trade fair.

Cyber physical systems gather data from the real world (physical space) through sensors and use big data analytics in cyberspace to energize and extract knowledge from this data. The resulting information and value is returned to the physical world to be used by industry and to solve social issues. The internetworking of all things through IoT provides the foundation for CPS.

One of the three CEATEC organizers is the Japan Electronics and Information Technology Industries Association. Its president, Nagao Hisato, explained the trade fair’s change of focus in the following manner.

By zeroing in on leading-edge technology in the form of CPS and IoT, CEATEC 2016 shifted to a trade fair better aligned with its name, which is short for Combined Exhibition of Advanced Technology.

Why did CEATEC shift its focus to CPS/IoT? The primary reason, as seen by the Japanese electronics industry, is that sensors for the CPS/IoT market will be a significant driver of growth in the years ahead.

The value of global production in the electronics and IT industry increased 1.5-fold over the last 10 years and is expected to reach ¥327 trillion in 2016. During the same decade, the share claimed by Japanese companies has trended at around ¥40 trillion, with production projected to be around ¥44 trillion in 2016. Clearly, Japan’s electronics industry is failing to keep up with global growth trends. 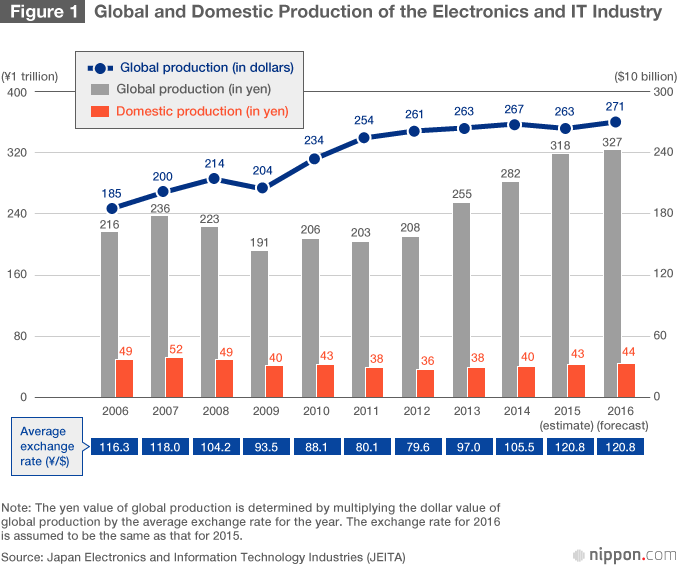 While the strong yen was a factor in the stagnant production of Japanese companies over the past decade, many industry observers also point to these companies’ lagging efforts to seek out growth sectors.

A JEITA survey discloses that, as of 2015, Japanese companies’ shares of the global production of the electronics and IT industry were 38% for electronic components, 31% for audiovisual equipment, and 15% for computers and IT terminals. While these shares are substantial, they are all for categories that are in decline. In the 10 years since 2006, the share of global production decreased by 4 percentage points to 6% for audiovisual equipment, by 4 points to 16% for computers and IT terminals, and by 2 points to 8% for electronic components. 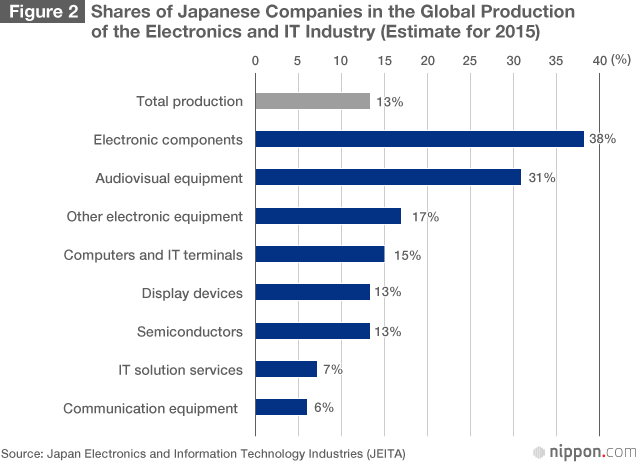 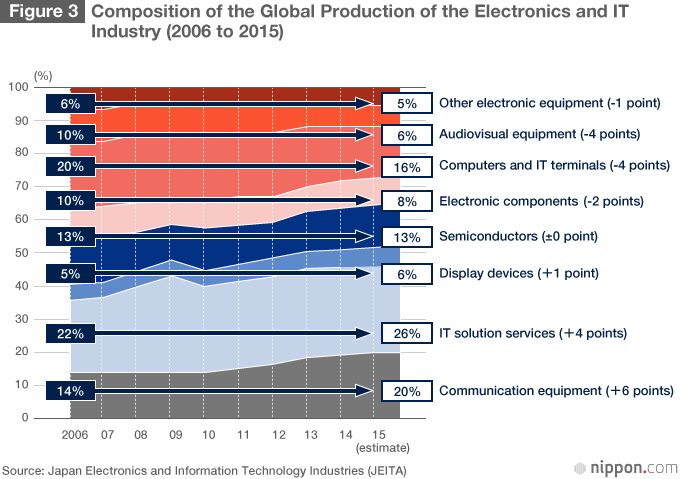 A common feature of many forecasts is the outlook that the sensor market will grow at an exceedingly rapid pace. JEITA reports that the global sensor market of 53.2 billion units in 2014 will expand at an annual average rate of 10% and become a market of 152.2 billion units in 2025, 2.9 times its former size. In value terms, annual growth will average 11%, and the market will increase 3.2 times to ¥9 trillion in 2025.

Japanese companies have many strengths in such areas as wearable terminals, wireless modules, and other IoT-related products and in artificial intelligence and robots that are essential for realizing CPS. If Japanese technology can be deployed in these areas, business opportunities will expand to peripheral sectors, which will further boost the growth potential of Japan’s electronics industry. A key issue going forward will be how to take advantage of growth sectors rather than depending solely on sensors. 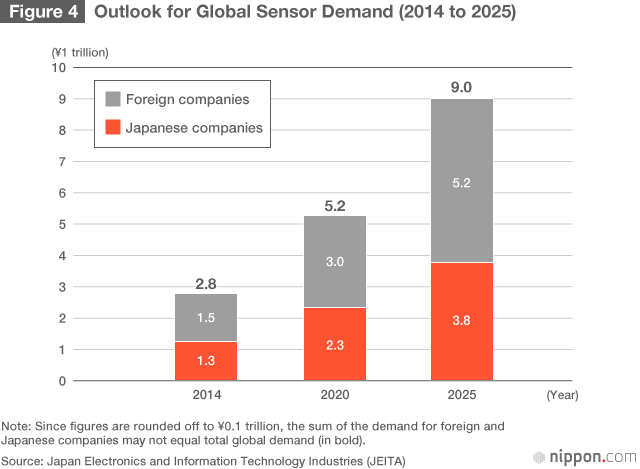 Japan as an IoT Pioneer

CEATEC 2016 presented a view of Japanese companies staking out their positions in relation to these growth markets.

Yamamoto Masami, chairman of Fujitsu and chairman of the Communications and Information Network Association of Japan, one of the organizers of CEATEC, remarks, “Technology has contributed to the progress of humankind and society through history. The steam engine and electricity unleashed the Industrial Revolution and gave rise to prosperous societies. IoT will have a similar impact on society. Japan is strong in technology and has achieved many innovations. As it has done in the past, Japan, I believe, should take the lead in pioneering the coming IoT age.”

Higashihara Toshiaki, president of Hitachi and chairman of JEITA comments, “Japanese engineers are highly skilled and Japanese equipment can be relied on to operate accurately, thus enabling the collection of high-quality data. In other words, Japan offers a hospitable environment for the application of CPS/IoT. Moreover, Japan has many strengths in sensing technology and in the implementation of knowledge extracted from such technology. CPS/IoT represents a major opportunity for the electronics and IT industry. While Japan is burdened with demographic and other social issues, I think it can contribute to the world by taking the lead in solving them.”

The convention center was filled with exhibitions showcasing Japanese technology, and many visitors were heard to say that there was much more to see than at CEATECs in the past.

Panasonic, for example, exhibited a makeup sheet using a noncontact skin sensor and special printing technology. This nano-level, ultra-thin sheet perfectly reproduces an individual’s skin tone and is able to conceal spots and freckles. The company also demonstrated a human body communication device enabling the use of natural gestures for authentication and communication, such as exchanging name cards with a handshake or unlocking doors without a key. 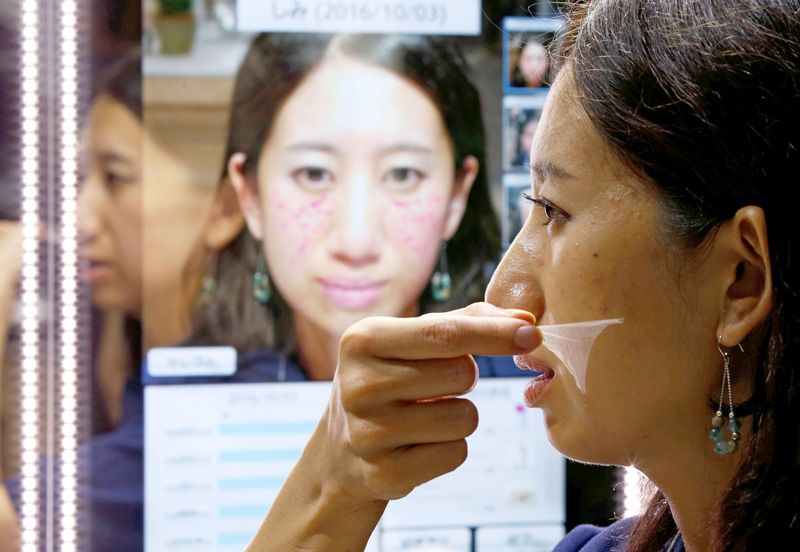 The makeup sheet exhibited by Panasonic. Sensors embedded in the mirror stand are used to analyze an individual’s skin condition, and a specialized printer prints a sheet that corrects for spots and pores. (Photo © Reuters/Aflo)

Sharp exhibited Home Assistant, a product embodying the concept of “AIoT Smart Home” that may begin shipping as early as the first half of 2017. This concept fusing AI with IoT represents Sharp’s efforts to embed artificial intelligence in things. The exhibition presented Sharp’s vision of smart homes where household electrical appliances are interconnected and can be operated by simply talking to them.

Mitsubishi Electric demonstrated a user interface for voice-activated drawing where spoken words are displayed as a finger is dragged across a screen, a small and high-precision air-quality sensor that uses a laser to detect fine particulate matter 2.5 microns or less in diameter, and next-generation driving-assistance technology featuring a hands-on 3D head-up display. 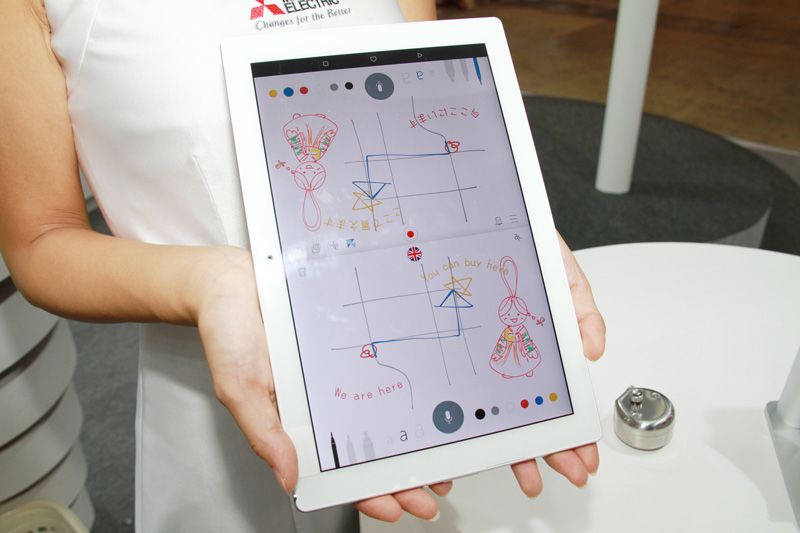 Mitsubishi Electric’s user interface for voice-activated drawing. Users can display their spoken words on a tablet or smartphone by dragging their finger across the screen while speaking. A multilingual translation function can be added to the UI to display text in another language.

Fujitsu demonstrated the collection of data while exercising using sensor modules embedded in shoe insoles. NEC exhibited ear acoustics authentication technology where individuals are identified by the acoustic characteristics of their ear canal.

As illustrated by the above examples, what stood out at CEATEC Japan 2016 were CPS/IoT-related exhibitions incorporating sensor technology. This is technology in which Japan excels.

If a CPS/IoT future is to be realized, however, partnerships transcending existing frameworks and industry categories will be essential. Major electronics firms will also need to strengthen their relationships with startups and other new companies. CEATEC 2016 included exhibitions from such industries as autos, finance, security, toys, travel, and distribution. Companies from these industries also had robots on display, highlighting their ties with the electronics industry. 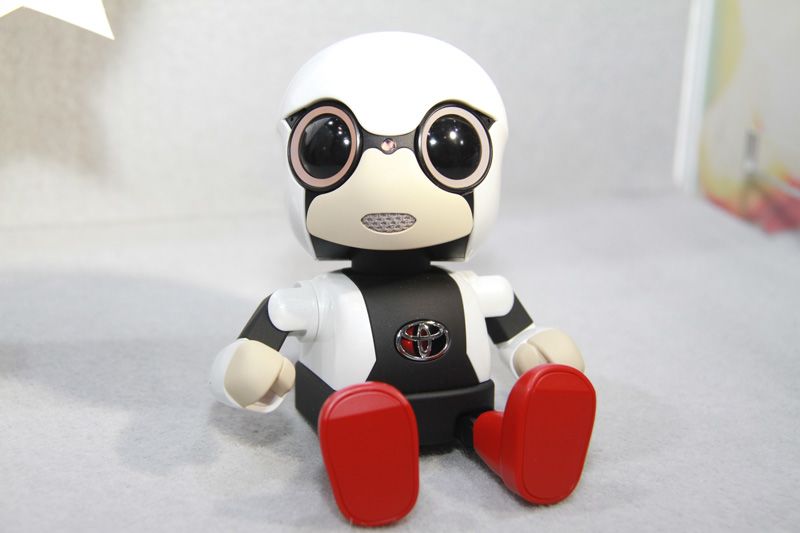 Toyota Motor exhibited Kirobo Mini, a communication robot that can fit in a cup holder in automobiles. The robot can record the preferences and memories of users and reflect them in future conversations. Kirobo Mini has a suggested retail price of ¥39,800 (excluding consumption tax) and is scheduled to appear in Toyota dealerships throughout Japan in 2017.