From Tomb to Museum: Transferring and Reconstructing the Kitora Burial Mound Murals

Culture Mar 9, 2017
A new museum displays murals from an ancient burial mound in Nara Prefecture that were painted some 1,300 years ago. Safely removing the murals from the tomb and reconstructing them was a complicated process that took 12 years.

The first mural was discovered in the ancient Kitora tomb in 1983. On the north wall, a survey team—using a fiberscope to view inside—identified a picture of Genbu, the black turtle-snake traditionally associated with the north. It is one of four originally Chinese mythological creatures that are connected with compass directions in Japan. A later survey in 1998 found the blue dragon Seiryū and the white tiger Byakko, corresponding with their traditional directions on the west and east walls, respectively. An astronomical chart was found on the ceiling.

In 2000, the Nara Prefecture tomb was designated a special historic site. The next year, researchers confirmed the presence of the fourth guardian spirit—the vermilion phoenix-like bird Suzaku—on the south wall. There were also pictures of the 12 animals of the Chinese zodiac on each wall. The discovery of Suzaku and the 12 zodiac animals painted as icons on plaster was unprecedented inside a kofun burial mound. Genbu, Seiryū, Byakko, and an astronomical chart had only previously been found as murals in the Takamatsuzuka tomb, also in Nara Prefecture. 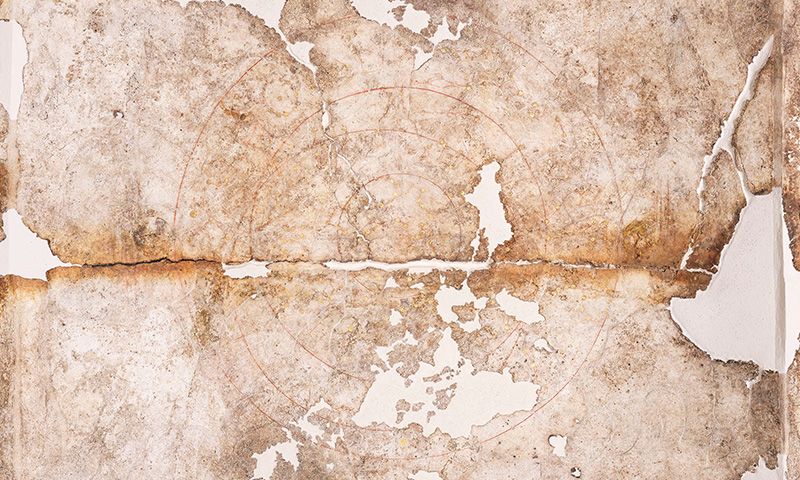 An archaeological excavation in February 2004 revealed the murals in full. At this time, however, the survey team found numerous places where the plaster was flaking off the walls to an alarming extent. These parts were first removed from the walls as an emergency measure. It was later decided to take out all of the murals to where they could be restored and preserved in another location. The 12-year process can be divided into three main stages: preventing further damage within the burial mound, removing the murals, and reconstructing them.

After this work was complete, from September 2016 the Shijin no Yakata (House of the Four Gods) museum in Asuka, Nara Prefecture, exhibited the astronomical chart, and the west and south murals with Byakko and Suzaku, respectively. The murals are on show during set periods, but the facility is open all year round. It features displays introducing the discovery of the tomb and inner walls, life-sized three-dimensional models, and monitors with high-definition images of the murals.

It took more than six years to take the murals out of the tomb after the initial decision was made in September 2004. In that time, the team took various measures to prevent further deterioration. The relative humidity within the tomb was almost 100%, and a sudden drop was likely to cause shrinkage and flaking of the murals as they dried out. To prevent this, a protective structure was built over the tomb, and both temperature and humidity were continually monitored.

At the same time, the moist conditions were perfect for microbes. Team members entering the tomb had to wear disinfected dustproof clothing and masks, and pass through an air shower to ensure they did not carry the tiny organisms in with them. Repair technicians also regularly checked the mural surfaces and took preventative action.

No Room for Error

The plaster removed in the initial stages was relatively thick and soft. The team was able to get by with spatulas and knives at first, but these were not suitable for the hard or very thin sections of plaster encountered later. It developed a diamond wire saw to cut these parts loose. 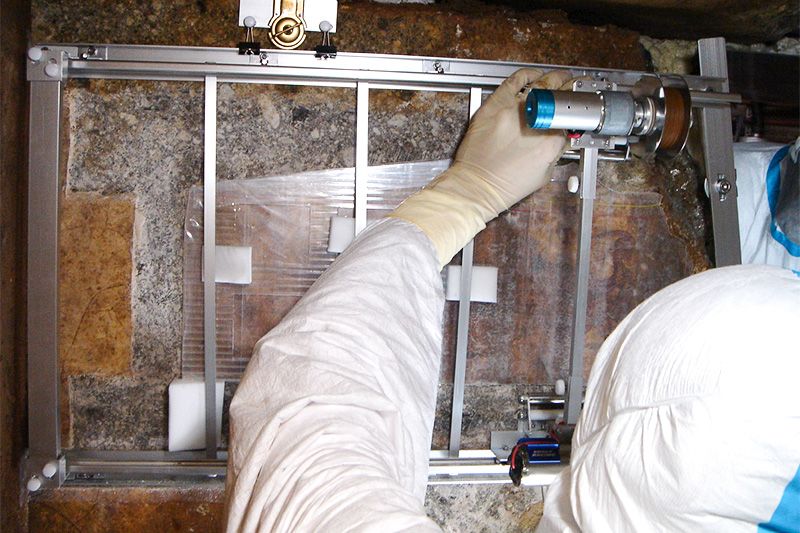 Removing the Suzaku mural with a diamond wire saw.

A diamond wire saw’s blade is coated with diamond dust, so it does not break even when cutting something very hard. Because it is thin, it also minimizes the amount of material lost through direct contact with the blade. By developing this kind of saw, the team hoped to be able to detach uniformly thin layers of plaster. As the plaster had been unevenly applied and the stone beneath was not flat, the team practiced repeatedly on mocked-up murals. There would be no room for error when working on the real thing. All these efforts paid off in the successful removal of the Suzaku mural, for which some sections of the plaster were no more than a few millimeters thick.

It was also essential to prevent the plaster from cracking after it was taken off the wall and during transit. The team made fiber sheets with adhesive to directly attach to the murals as a first protective layer. They were suitable to different thicknesses and positions of plaster, as well as curved sections on the ceiling. The sheets were made from a thin microbe-resistant fiber, and the applied adhesive could be dissolved again using an ethyl alcohol solution.

The team then fixed a second strong layer of synthetic material, which was transparent so it was possible to check the condition of the mural during removal. The curved sections of the astronomical chart in particular required a material that could be applied to fix the mural immediately after it had been set into shape and would be strong enough to support the plaster. The final choice was fiber-reinforced plastic, which is used following natural disasters and in other emergency situations.

The next stage was the reconstruction of the murals from a total of 1,143 fragments. Due to concerns about the strength of these pieces of plaster, they were reinforced with several protective layers on their undersides before being attached together on a firm backing. All of the various materials used had been selected through a long process of trial and error. 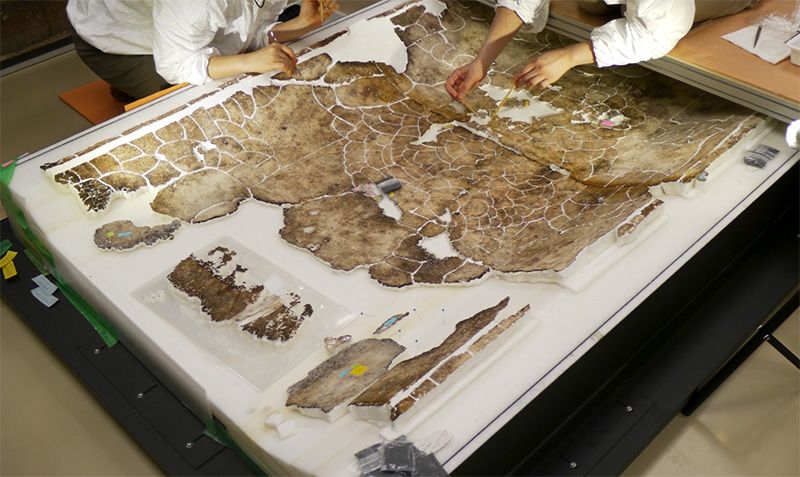 Reconstruction of the astronomical chart.

In 2009, the Agency for Cultural Affairs had decided “for the time being” to preserve and exhibit the murals in an appropriate facility outside the tomb. This left open the possibility of the murals subsequently being moved to a different setting. For this reason, the team decided it would be best if the reconstructed murals could also be separated again if necessary, and chose materials accordingly. 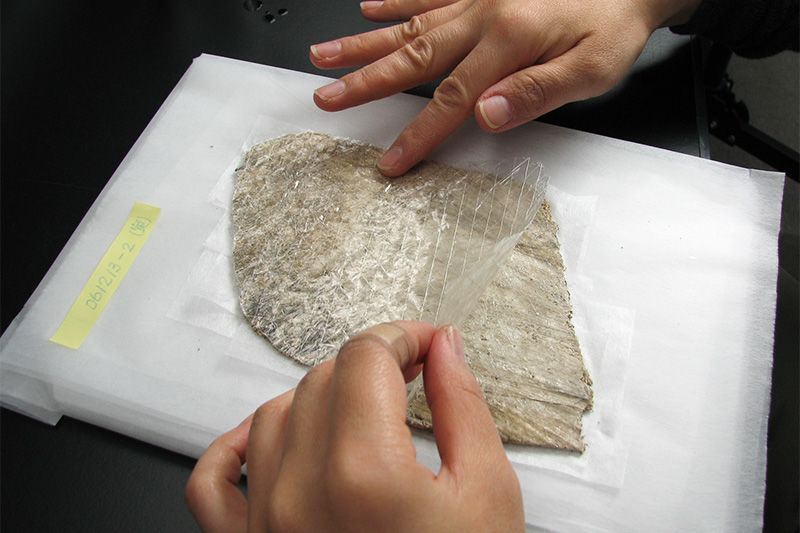 Taking off the backing from a piece of plaster.

The reinforcement for the plaster fragments can be removed, such as with solvent, when the time comes for the next restoration. The fragments were supported underneath by sheets made from polyarylate—a strong fiber used in bulletproof vests—attached to synthetic materials employed in the restoration of cultural properties. It took some time to develop a mixture ratio for filling gaps between the fragments that would be easy to remove and would not shrink after drying.

In many countries, mural restoration is carried out by specialist organizations. In Japan, however, there have been relatively few restorations of murals painted on plaster, so technicians from the Association for Conservation of Natural Treasures conducted most of the work for the Kitora burial mound. The ACNJ mainly works under the Cultural Affairs Agency to preserve and restore Nihonga paintings, written materials, and other designated cultural properties.

Paintings and written materials need regular restoration work, so the technicians involved in such projects always keep in mind that the task will need to be repeated in the future. In other countries, though, teams involved in mural restoration often focus on firmly fixing them in place and on minimizing the difference between the original and restored sections. By contrast, with Nihonga paintings, future restoration and dismantling are taken as a given.

For example, hanging scrolls consist of a surprising number of parts and are designed to be easily taken apart. The techniques used in this process were applied to putting the Kitora murals back together. Another method adopted based on the restoration of aging Nihonga paintings was attaching surface parts to thin sheets with glue that could be dissolved after work was complete.

The project to restore the Kitora murals involved close communication between team members with different skills. Those with a scientific background chose materials and methods, while others who specialized in the restoration of paintings decided whether they were appropriate. Their collaboration ensured the preservation of a priceless cultural treasure.

(Originally published in Japanese on November 28, 2016. Banner photo: Reconstructing the Kitora tomb mural from fragments. Courtesy of the Agency for Cultural Affairs of Japan.)