Insights from a Half-Century of Oceanographic Observations

Science Technology Jun 16, 2017
The Japan Meteorological Agency conducts oceanographic observations using two dedicated research vessels. Since 1967, these ships have annually measured the composition of seawater along the 137º east meridian, starting offshore from Mie Prefecture and continuing to New Guinea. This unique dataset, amassed over the past 50 years, contributes significantly to our understanding of environmental change.

The Importance of 137º East

During the same time each year, The Japan Meteorological Agency dispatches ships along fixed routes called transects throughout the northwestern Pacific. The most important of these runs, down the 137º E meridian, began in the winter of 1967, one year after the research vessel Ryōfū-Maru 2 entered service. In 1972, summer research cruises were added to provide seasonal observations. February of this year marked the completion of the fifty-first winter cruise along the 137º E meridian. 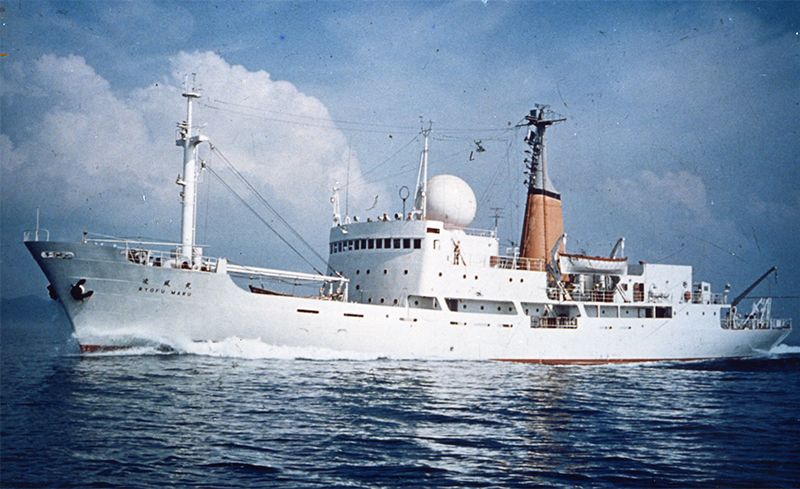 Dr. Masuzawa Jōtarō, who served as head of both the JMA and the Oceanographic Society of Japan, later noted that the 137º E transect was selected to cross representative features of the northwestern Pacific, such as the Kuroshio and North Equatorial Currents, thereby obtaining observations of large-scale variability with minimal local effects from islands and seamounts. Observations along the 137º E transect began as the Japanese-led Cooperative Study of the Kuroshio and Adjacent Regions (CSK), conducted under the aegis of the Intergovernmental Oceanographic Commission of UNESCO to better understand western Pacific circulation. 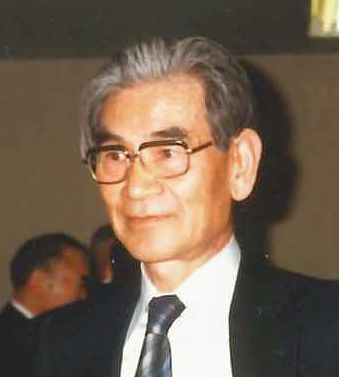 Dr. Masuzawa had once said of the 137º E transect that doubt lingered about whether annual measurements could clarify the long-scale, long-term oceanic variability in the northwest Pacific, believing that only after 30 years would the value of the observations come to light. Now that 50 years have passed, though, the data collected has led to over 100 scientific publications that greatly further our understating of not only the structure of the northwest Pacific, but also variability in physical and biogeochemical processes, as well as climate phenomena such as ENSO, the El Niño Southern Oscillation. Publications using this data have been in turn cited by the Intergovernmental Panel on Climate Change’s fifth Assessment Report, released in 2013.

Such long-term, continuous observations along a fixed transect are one of a kind. The JMA’s open data policy, which provides all data to any researcher, has been widely commended by domestic and international institutions. Dr. Masuzawa’s foresight is admirable considering the current threat from global warming and environmental change.

The 137º E transect extends for approximately 3,400 km between 34˚ north and 3˚north latitude, beginning southeast of Mie Prefecture’s Shima Peninsula, offshore from Daiōzaki, and finishing north of New Guinea. The ship is stopped and measurements made at every degree of latitude, an interval of approximately 110 kilometers, regardless of the time of day. The entire process requires about two weeks. Typical measurements are made to a depth of 2,000 meters, but for the deepest points, in excess of 6,000 meters, it takes approximately 5 hours to complete sampling. The sampled water is then analyzed during the four- to five-hour transit to the next station. 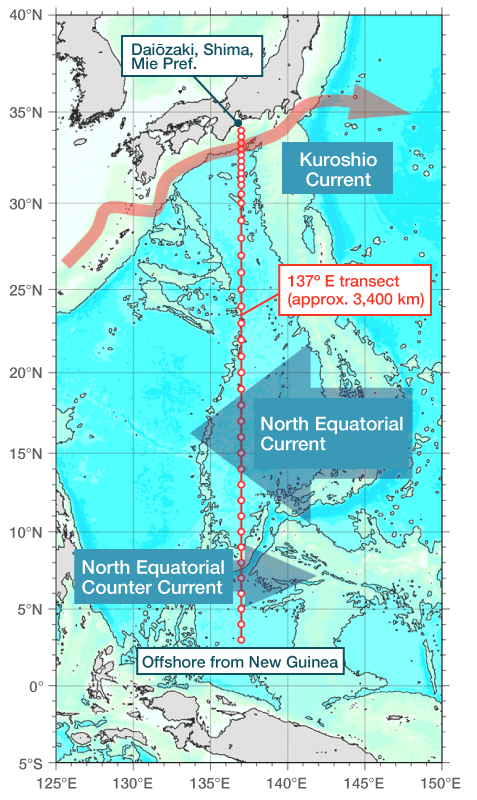 Sampling along the 137º E meridian has been conducted for over 50 years by the JMA.

As technology improves, new sampling devices and analytical instruments have been introduced, but five fundamental parameters have always been measured: water temperature, salinity, dissolved oxygen, nutrients, and chlorophyll a. In the 1980s, it became clear that there was a need to monitor the greenhouse gases responsible for global warming, and researchers began taking measurements of atmospheric and ocean surface layer carbon dioxide concentrations. This has built a trove of more than 30 years’ worth of valuable data. Investigators are also calculating seawater parameters such as dissolved inorganic carbon, total alkalinity, and pH, thereby highlighting variations in the carbon cycle, and are monitoring chlorofluorocarbons, too. 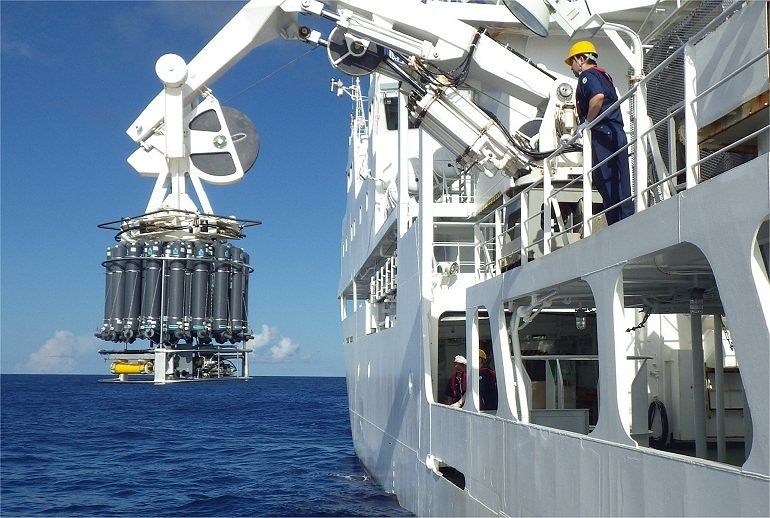 A CTD rosette used to measure conductivity (salinity), temperature, and depth with 36 Nansen (or Niskin) bottles for sampling seawater from discrete depths is deployed via a winch and cable. The device sends real-time, continuous data back to the ship, where researchers can trigger water sampling.

Based on these 50 years of measurements, the distribution of temperature and salinity in the northwestern Pacific water column appears to vary with periods of several years to a decade. This variability is related to offshore meanders in the path of the Kuroshio Current that flows along Japan’s southern coast, as well as to ENSO, which has a similar, characteristic timescale.

With continuous measurements made with increasingly high-precision instruments capable of producing high-resolution data, not only are the long-term, large-scale changes originally of interest to Dr. Masuzawa becoming clear, understanding of much shorter-term spatial and temporal variability has greatly improved. For example, the existence of a subsurface current flowing east to North America, the North Equatorial Undercurrent (or Cromwell Current), was recently confirmed. This current underlies the North Equatorial Current, which at 10º–20˚ north latitude flows westerly into the Kuroshio, forming the clockwise North Pacific Subtropical Gyre. There are likely to be similar discoveries in the future.

Additionally, these measurements have revealed long-term variability in concentrations of carbon dioxide in both the surface and underlying ocean. As ocean uptake of atmospheric carbon dioxide proceeds, internal concentration is increasing, leading to a decrease in pH (an index of hydrogen ion concentration that describes acidity) know as “ocean acidification.”(*1) Furthermore, seawater pH also varies periodically in relation to changes in ENSO and the subtropical gyre. 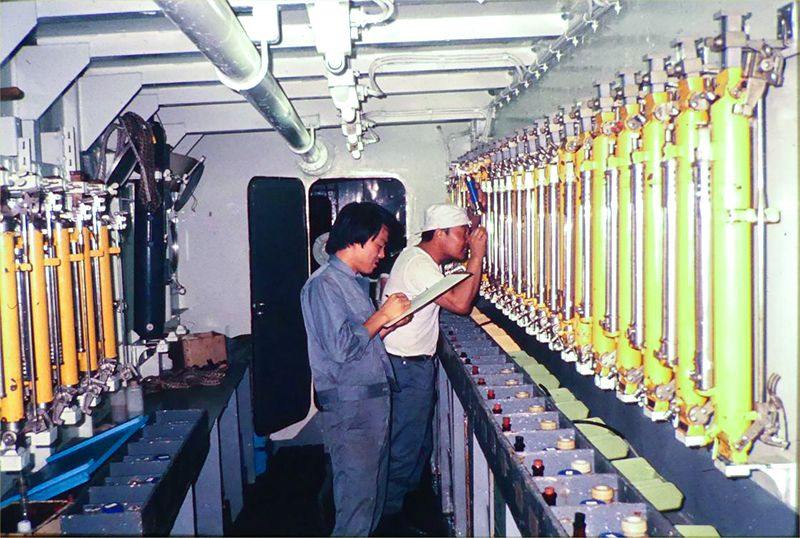 Researchers examine Nansen bottles and the reversing thermometers, which lock in the temperature measured at depth, that were used prior to the introduction of the CTD rosette capable of continuous, real-time measurements of the water column. Temperatures are read from the thermometers and water subsampled from each bottle. Temperature and salinity data are only obtained for the discretely sampled depths.

In recent years, ocean monitoring has increasingly been performed by automated platforms, such as satellites, or autonomous floats, such as Argo Floats, which are able to run for 10 days measuring seawater down to 2,000 meters. However, high-precision measurements of physical parameters like temperature and salinity, or biogeochemical parameters related to the state of carbon in the ocean, over the entire water column down to the sea floor still requires research vessels. Therefore, in this age of global warming, measurements from ships will remain fundamental to detecting subtle yet important changes to the ocean and furthering understanding of both its long-term variability, as well as the mechanisms responsible for that variability.

With increasing supercomputing power and the resulting elaborate, high-resolution numerical models, the detailed 137º E data has become the basis for understanding at much finer scales the three-dimensional nature and mechanisms of variability throughout the North Pacific. This data will also serve to access the validity of model predictions of future global climate and environmental change. Needless to say, much is expected from the 137º E transect.

At the same time, a number of other domestic and international ocean observation projects have started, with the 137º E transect included in the World Ocean Circulation Experiment carried out during the 1990s. In 1994, observations were performed at half the interval spacing (30 minutes of latitude), with measurements at each station extending to the seafloor. This was repeated again in 2010 and 2016. Today, the 137º E transect is included in both the Global Ocean Ship-Based Hydrographic Investigations Project (GO-SHIP) and the Global Ocean Acidification Observing Network.

The JMA intends to continue collecting this invaluable data along the 137º E transect. 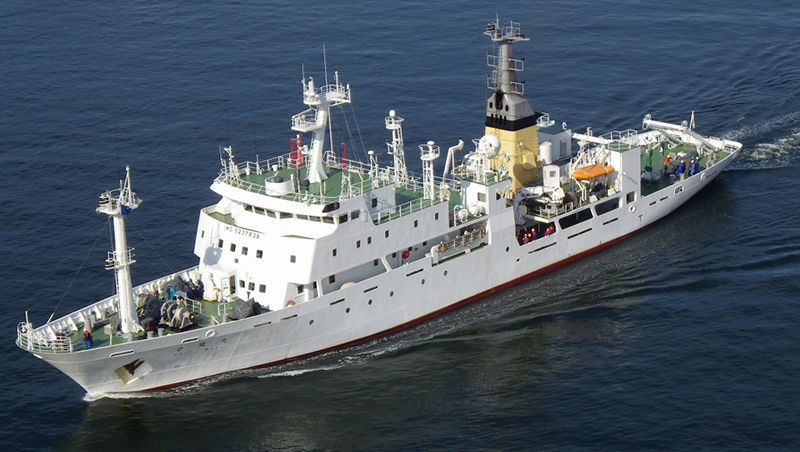 The JMA operates another research vessel, the Keifū-Maru 2.

(Originally published in Japanese on April 28, 2017. Banner photo: The Ryōfū-Maru 3, currently in operation. All photos courtesy the Japan Meteorological Agency.)

(*1) ^ “Ocean acidification” does not refer to a seawater pH below 7 (neutral), but rather indicates that the weakly alkaline (pH around 8.1) sea water is gradually becoming more acidic (lowering of the pH).