Lessons of the 1997 Financial Crisis in Japan

Economy Oct 30, 2017
Japan’s economy is still under the grip of deflation and low growth, a situation that can be traced back to 1997 when a financial crisis led to the abrupt contraction of the economy. Two decades later, this article reviews what actually took place in November 1997.

The Japanese Economy’s Most Dangerous Day

“This looks bad. People are forming lines in front of banks.” So went the phone call the Ministry of Finance received from the Bank of Japan the morning of November 26, 1997. The phrase “financial panic” began forming in the minds of ministry officials. At an early morning press conference held at the ministry earlier the same day, Finance Minister Mitsuzuka Hiroshi reported the failure of Tokuyō City Bank based in Miyagi Prefecture. He stated, “We are taking every step necessary to fully protect deposits and to stabilize interbank transactions. We will do our utmost to prevent further repercussions.”

At the time, it was not government policy to immediately tap the deposit insurance program to pay off depositors when a bank failed. Bank of Japan Governor Matsushita Yasuo, who met the press at the same time, emphasized this point and called for calm by saying, “We are not considering the early use of payoffs.”

The same month had already seen the successive failures of such well-known financial institutions as Sanyō Securities, Hokkaidō Takushoku Bank, and Yamaichi Securities. In comparison, Tokuyō City Bank was much smaller. Despite the careful vigilance required, the finance ministry, BOJ, and media had become accustomed to financial institutions failing and were caught napping. 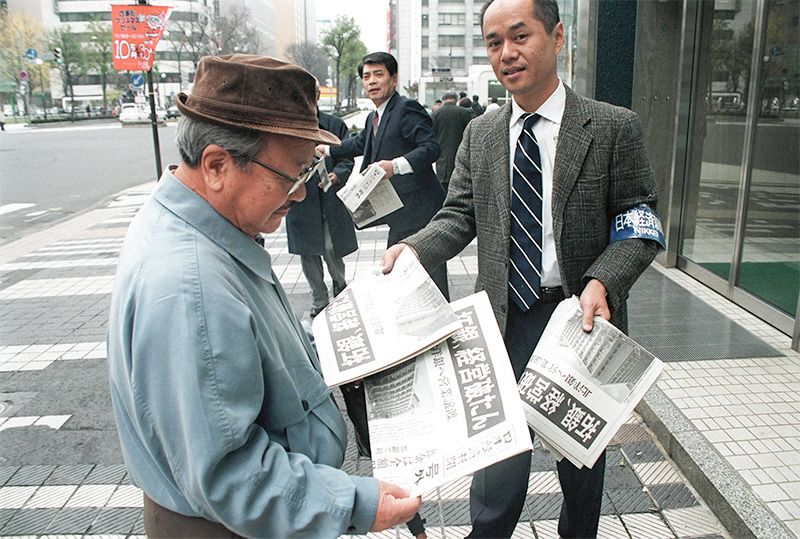 A citizen receiving an extra edition reporting the failure of Hokkaidō Takushoku Bank in front of the bank’s head office in Sapporo on November 17, 1997. (©Jiji)

People were lining up to withdraw deposits mainly from banks identified in weekly magazines as being at risk. The MOF and BOJ held an emergency meeting. For the time being, banks were instructed through the ministry’s local finance bureaus not to let customers stand in line outside their branch offices. Crowds filling the street would draw attention and create further uncertainty. “I remember providing detailed instructions to banks, such as to distribute numbered tickets or use their reception rooms,” remarked one person from a finance bureau.

The media were also perplexed. Many newspapers, news agencies, and TV stations were aware that lines were forming in front of bank branches around Japan. Reporting this, however, would risk magnifying citizen’s uncertainties and shaking markets. In the end, news media universally refrained from reporting the situation. There was no collusion or demands from authorities. Each outlet decided independently not to report anything.

Things began to settle down in the afternoon. Once it was evening, the MOF and BOJ received reports that depositors waiting in line before banks had dissipated like the receding tide.

In 1927, Japan suffered the Shōwa Financial Crisis.(*1) Triggered by a remark made by the minister of finance before the Diet, depositors rushed to withdraw cash from banks around Japan. Photographs have preserved scenes of crowds massed before bank branches.

The Japanese economy also went through multiple crises in the postwar period. In the 1970s, it was hit by US President Richard Nixon’s removal of the dollar from the gold standard and two oil crises. November 26, 1997, however, was the most dangerous day for Japan, and might have cratered the economy.

The Generation and Collapse of an Asset-Bubble Economy

Why did things go so wrong? During this period, banks’ management crises were usually caused by nonperforming loans. The problem of nonperforming loans, however, cannot be understood without knowing the history of the generation and collapse of an asset-bubble economy.

The famous Plaza Accord was concluded at the Plaza Hotel in New York in September 1985. At that time, the US was suffering from current account and fiscal deficits, and it hoped to overcome the situation through foreign exchange adjustments. This accord meant that the Japanese currency would strengthen. The yen traded then at ¥240 to the US dollar, and it rapidly appreciated to around ¥150 to the dollar one year later.

The appreciation of the yen was a serious blow for Japan’s economy, and particularly its exporting industries. As one of the steps taken to stimulate the economy, the BOJ eased monetary policy five times between 1986 and 1987. In 1987, land prices began to rise, and continued to climb between 1988 and 1990, spreading from large metropolitan areas to regional cities.

Led by land prices, stock prices also rose. At the end of December 1989, the Nikkei stock average stood at an all-time high of 38,900. The Japanese economy had surmounted a recession caused by the yen’s appreciation and was booming. Looking back, this period was the peak of the asset bubble.

In 1990, however, things turned for the worse. As land prices began to decline, the MOF issued new regulations on land loans, a move with grievous consequences. Land and stock prices began to fall. The asset bubble had burst. For banks with loans secured by land, the value of collateral fell below the value of loans, and companies making portfolio investments suddenly found themselves in financial difficulties. Through this process, banks came to hold unrecoverable or hard-to-recover nonperforming loans.

An Aversion to Injecting Public Funds

The first time the MOF issued an order for business improvement to a financial institution based on the Banking Act—the legal basis for bank management—was in 1988. “If the Banking Act was invoked, this would mean that the financial institution was at risk. That might raise concerns about creditworthiness. To avoid such a situation, we were cautious about invoking the act,” reflects an official who worked for the finance ministry’s Banking Bureau at the time.

The bad debt problem came to divide the Diet’s governing and opposition parties from an unexpected quarter. Rather than banks, the spark was provided by specialized housing loan companies. These were companies that borrowed funds from banks to lend as housing loans to individuals. To expand their business, they also escalated their real estate loans to companies. While banks made strict credit assessments in extending loans, by lending to specialized housing loan companies, they increased easier loans on their loan books.

These loans soured with the collapse of the asset bubble. Since specialized housing loan companies did not accept deposits, it should have been possible to dispose those that became insolvent through bankruptcy. What made the situation difficult were the loans housing loan companies made with funds raised from agricultural financial institutions. At that time, agriculture-affiliated Diet members had enormous power. Fearing the impact on agricultural financial institutions, they forced the government to approve a budget allocation of ¥685 billion in public funds to offset losses in December 1995.

This generated fierce opposition. Newspapers published editorials headlined, “This Cannot Be Allowed” (Asahi Shimbun) and “A Political Settlement Breaking the Rules” (Nikkei). Despite the growth of bad loans held by banks at the heart of the financial system and despite being at the threshold of a crisis, the use of public funds was no longer discussed at the MOF.

With public funds not an option, it sought to rescue the troubled Nippon Credit Bank with investments and loans from other companies in the same industry. This became known as the donation list method, which became a popular term at the time.

In March 1997, a press conference was held to announce that related parties had reached an agreement to merge the troubled Hokkaidō Takushoku Bank with Hokkaidō Bank. This agreement, however, fell apart, and Hokkaidō Takushoku Bank went bankrupt in November, bookended by the failures of Sanyō Securities and Yamaichi Securities. Immediately after, on November 26 the run on banks followed.

Faced with this crisis, the MOF began to develop a legal basis for the injection of public funds. There was no time to wait despite the Diet’s aversion to the use of public funds ensuing from the housing loan company affair. It was finally decided that, even if tax revenues were expended, the financial order must be maintained to prevent Japan’s economy becoming damaged beyond repair.

Financial Developments since the Collapse of the Asset Bubble

Subsequently, the Long-Term Credit Bank of Japan and the Nippon Credit Bank failed in 1998. What are the lessons to learn from the financial crisis that began in 1997? One former MOF official states, “Suppressed bankruptcies became reality. The failure of Sanyō Securities in early November was particularly painful since it caused defaults in the short-term call money market and an abrupt credit crunch. I don’t think the method of aiming for a soft landing by taking over troubled financial institutions while promoting economic growth was mistaken. The economy, however, took a downward turn after peaking in mid-1997. Japan demonstrated the deep wounds a financial hard landing can leave on the economy.”

There is strong sentiment that the government waited too long to inject pubic funds. Tanaka Takayuki, a Senshū University professor who formerly worked for the Long-Term Credit Bank of Japan, states from a professional perspective, “Japan should have promptly injected capital into banks when the asset bubble collapsed as the United States responded to the global financial crisis of 2008.”

(Originally published in Japanese on October 30, 2017. Banner photo: A long line of customers in front of the Shinjuku Branch of Yamaichi Securities in Tokyo on November 25, 1997. ©Jiji.)

(*1) ^ At a time when Japan’s economy was in recession and many companies and banks were weighed down by large quantities of bad debts, the minister of finance of the day carelessly stated at a Diet session in March 1927 that a certain private-sector bank was bankrupt despite its continuing operations. This caused financial uncertainties to spread, and many bank runs occurred. While calm appeared to have returned, financial uncertainties resurfaced, and Suzuki Shōten, a major trading house, went bankrupt.