The Japanese Economy in 2018: On Track for a Record-Setting Growth Streak

Confidence in the economy is surging among Japanese businesses large and small. According to the Bank of Japan’s December Tankan (Short-Term Economic Survey of Enterprises), large manufacturers’ overall assessment of business conditions improved for the fifth straight quarter, hitting an 11-year high of +25. The confidence index among small and medium-sized businesses reached +15, the highest level recorded since August 1991.

There are good grounds for their optimism. Real growth in Japan’s gross domestic product rose at an annualized rate of 2.5% in the July–September quarter, marking the economy’s seventh straight quarter of expansion. It was Japan’s longest quarterly growth streak since the government began compiling comparable statistics in 1994. In the December ESP Forecast, the consensus forecasts for real GDP growth (averaged from the predictions of 41 economists polled by the Japan Center for Economic Research) were 1.84% for fiscal year 2017 (ending March 31, 2017) and 1.22% for fiscal 2018. The forecast for inflation was a 0.64% increase in core consumer prices (excluding fresh foods) in fiscal 2017 and a 0.85% increase in fiscal 2018.

In its Indexes of Business Conditions, the government has pronounced the economy “improving” (its highest rating) for 13 straight months, from October 2016 to its most recent outlook in October 2017. For almost 18 months previously (from May 2015 to September 2016), it had deemed conditions “weakening,” as the yen’s rapid appreciation and other factors raised the specter of a stalled recovery. Now, with businesses in the catch-up phase of the inventory cycle, any immediate danger of a slump is past. In the absence of some major shock to the system, the positive outlook is expected to continue in the coming months. 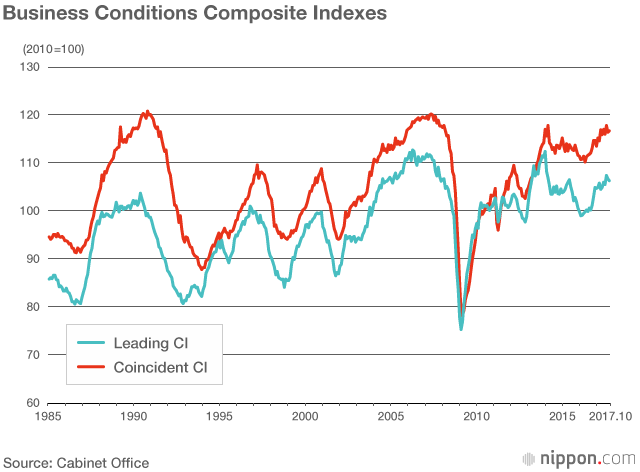 The 58-month period from December 2012 to September 2017 now ranks as Japan's second-longest expansion since the end of World War II, surpassing (in duration, at any rate) the so-called Izanagi boom of 1965–70. If the current “Abenomics expansion” continues through December 2018, as seems likely, it will match the postwar record of 73 months, from February 2002 to February 2008 (sometimes dubbed the Izanami boom).

In the December 2017 special edition of the ESP Forecast, economists were asked to choose up to 3 major risk factors (out of 11 possible responses) with the potential to blunt Japan’s economic growth over the next 6 to 12 months. The top four responses by far were “economic downturn in China” (29 respondents), “yen appreciation” (21), “rising international tensions/military clashes” (19), and “economic downturn in the US” (18)—all factors linked to the external environment.

Meanwhile, China’s business outlook seems to be improving. In a special November survey, the percentage of forecasters predicting that China’s Manufacturing PMI would fall below 50 (indicating contraction) in 2018 dropped markedly between August and November 2017. Thus, the likelihood of a major slump in China—the foremost concern of Japanese economists and businesspeople—seems to be receding, as a consensus emerges that the Chinese economy is heading for a gentle deceleration rather than a hard landing.

In fact, the global economy as a whole appears to have strengthened since the second half of 2016.

In the United States, real GDP grew at a brisk annualized rate of more than 3% in both the second and third quarters, putting to rest concerns that large-scale damage from the major hurricanes of late summer would blunt the economy’s momentum. In the coming year, the stimulative effect of the recently passed tax reform, as well as promised infrastructure spending, should help keep the US economy on its current growth trajectory.

In China, 2018 is unlikely to bring the sharp downturn many had feared. With the help of government spending, the economy is expected to remain on an even keel as growth slows to around 6.5%. The outlook has also improved somewhat for exporters of raw materials. Energy and metal prices have rebounded, and monetary easing policies have kicked in, causing forecasters to modify their earlier predictions of sluggish growth among economies dependent on exports of commodities. As a result, experts are forecasting stable growth in the global economy as a whole. In its World Economic Outlook, released last October, the International Monetary Fund predicted slow but steady improvement, with forecasts of 3.6% real GDP growth in 2017 and 3.7% growth in 2018.

In terms of other external factors, exchange rates have exhibited a high degree of long-term stability of late, aided by coordinated efforts by central banks to achieve and maintain a low rate of inflation (around 2%). Oil prices have been relatively steady as well.

Buoyed by these favorable global conditions, Japan can look forward to growth in exports, balanced by an increase in imports to meet domestic demand, as the economy expands in the coming year. The recent surge in inbound tourism (and associated consumption) can be expected to continue as well.

While the typhoons of September and October 2017 had a negative impact on economic activity, the appearance of the La Niña climate pattern for the first time in six years could have a salutary effect over the next few months. Although heavy snow is a risk factor, the colder-than-usual winters associated with La Niña generally herald brisker sales of winter goods.

One might even be justified in taking heart from the 2017 cherry-blossom season. In Tokyo, the first Yoshino cherry buds opened on March 21, about five days earlier than usual, and the trees did not reach peak bloom for another 12 days—4 days longer than average. In Japan, we are told, such early and extended cherry-blossom seasons correlate with economic expansions that continue for at least another year. Perhaps all those opportunities to view the cherry trees in bloom help restore the nation’s energy and optimism.

Jobs as the Key to Resilience

With all signs pointing toward modest but sustained expansion, the Japanese job market is steadily strengthening. The active opening-to-applicant ratio has continued to climb, reaching 1.55 in October 2017—the highest monthly figure since the 1.64 recorded in January 1974. Rounded to the first decimal place, the unemployment rate has remained at a steady 2.8% each month between June and October, but since August it has actually been under 2.80. These trends bode well for wage increases in the year ahead. If the major enterprise unions can secure a 3% increase in their 2018 spring wage negotiations, consumer spending is bound to rise in response.

Higher employment and better wages offer other benefits as well. The number of confirmed penal code violations has dropped steadily over the past few years, falling from 1.4 million in 2012 to less than 1 million in 2016. The trend continued in the first half of 2017, as violations fell to 45,100—a 7.7% drop from the same period in 2016. Suicides have fallen as well after soaring to more than 30,000 in the wake of the 2008 economic crisis; in 2016, the number of suicides fell below 22,000 for the first time in 22 years, and the figure for January–November 2017 is down 3.0% from the same period in 2016. With good jobs comes stability, and with stability comes the confidence needed to support sustained economic expansion.

The national mood is looking up, judging from the results of the Cabinet Office’s annual Public Opinion Survey on the Life of the People. In 2017, a full 73.9% of respondents indicated that they were basically satisfied with their current standard of living, the highest percentage tallied in the more than 50 years since the survey began asking the question.

The year to come is sure to bring challenges in the form of major weather events, international tensions on the Korean Peninsula and elsewhere, and other potential threats to growth, but most indicators suggest that the Japanese economy now has the resilience to overcome such temporary setbacks. Looking ahead to 2018, it is not unrealistic to anticipate another year of modest but stable growth fueled by a balanced mix of internal and external demand.

(Published in Japanese on January 4, 2018. Banner photo: A digital display in Tokyo shows the Nikkei Stock Average on December 29, 2017 before trading closes for the year. © Jiji.)