Shopping Bags in the Abyss: Addressing the Deep-Sea Plastic Crisis

Environment Science Oct 3, 2018
The discovery of plastic refuse in the darkest depths of the ocean illustrates the effects of human activities on even the most remote ecosystems on earth. Biological oceanographer Chiba Sanae describes what is happening thousands of meters under the sea.

Litter at the Bottom of the Sea

The impact of human activity, namely our heavy reliance on single-use plastic products, has reached even the deepest depths of the ocean. Recently, I helped publish “Human Footprint in the Abyss,” the first-ever paper documenting the extent of plastic pollution in marine environments at depths greater than 6,000 meters. The project involved researchers from the Japan Agency for Marine-Earth Science and Technology and the UN World Conservation Monitoring Centre, and was based in part on findings from JAMSTEC’s Deep-Sea Debris Database. Launched in 2017, the database compiles images and videos taken from 1982 through 2015, during 5,010 dives to depths of more than 100 meters, by deep-sea submersibles and remotely operated vehicles. 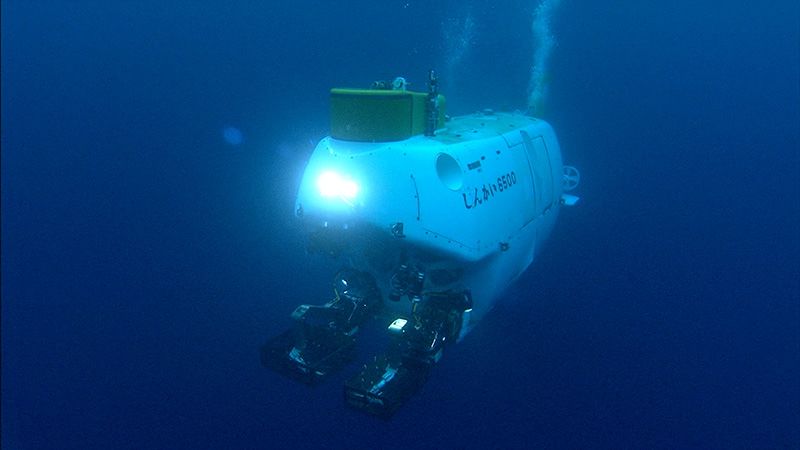 Our research found that 33% of debris observed at depths below 2,000 meters was macroplastics—plastic waste large enough to see with the naked eye—of which 89% was single-use items such as shopping bags. Below 6,000 meters, these ratios increased to 52% and 92%, respectively, conclusively illustrating that no part of the ocean, not even the unexplored abyss, is free from the spread of marine plastics.

The image that created the biggest media buzz was a plastic bag lying at the bottom of the Mariana Trench, more than 10,000 meters below the surface. This was not even a new finding, but was first observed during a 1998 survey. The information in the JAMSTEC database stretches back even further, dating from 1983, and shows that plastic pollution in the deep sea is far from a recent development but has been steadily accumulating for decades. 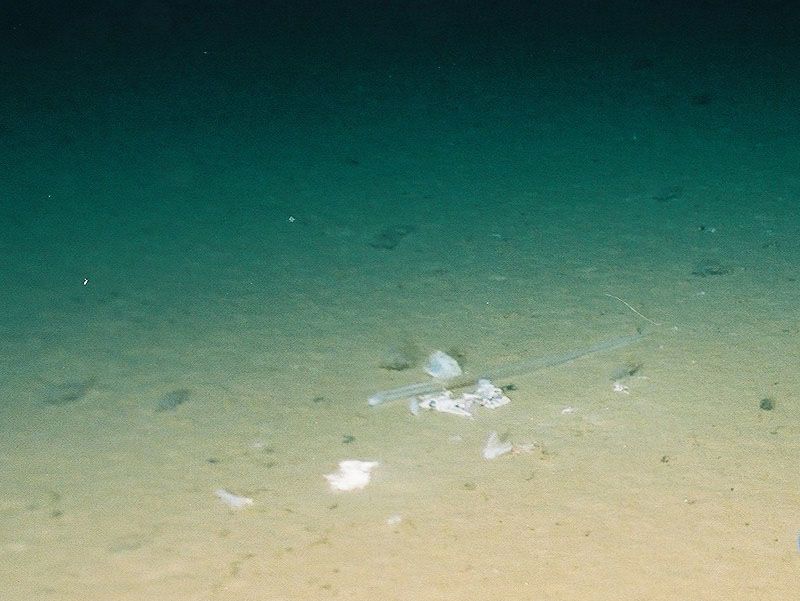 Pieces of a plastic bag lie at the bottom of the Mariana Trench at a depth of 10,898 meters. (Photo courtesy of JAMSTEC)

Too Deep to Reach

Over the last decade, research groups mainly in the United States and Europe have used trawl sampling and submersibles to gather information on deep-sea plastics. The results show a greater density of plastics and industrial waste like discarded fishing nets and used tires on sea floors near heavily populated coastal areas. Ocean geography is considered to be a factor in the dispersal of debris, with items collecting more readily in trenches and submarine canyons. Farther from land, though, litter was overwhelmingly lightweight, single-use plastics transported far out to sea by ocean currents.

It is well documented that surface debris concentrates in certain areas of the ocean to form so-called garbage patches. From there, complex vertical current mechanisms push normally buoyant plastics into deeper waters and eventually to the sea floor. The fact that plastic debris has been observed on the seabed at incredible depths suggests that the sea as a whole is awash in litter. Research on the different transport mechanisms in fact indicates that plastics are ubiquitous in every strata of the water column, from the surface to the deepest abyss.

The problem extends far beyond shopping bags, though, and includes a deluge of microplastics less than 5 millimeters in length. These miniscule pieces of debris find their way into the ocean in a variety of ways, including larger plastics that have broken down, microbeads used in cosmetics, and fragments of synthetic fibers from laundered clothing. Scientists are starting to grasp the global scale of the problem, but the remoteness of the deep sea poses a significant barrier to removal of plastic pollution. A recent study found high levels of microplastics on the Arctic Ocean seabed at depths of more than 5,000 meters. Currently, it is both technologically and economically impossible to collect debris at such enormous depths. 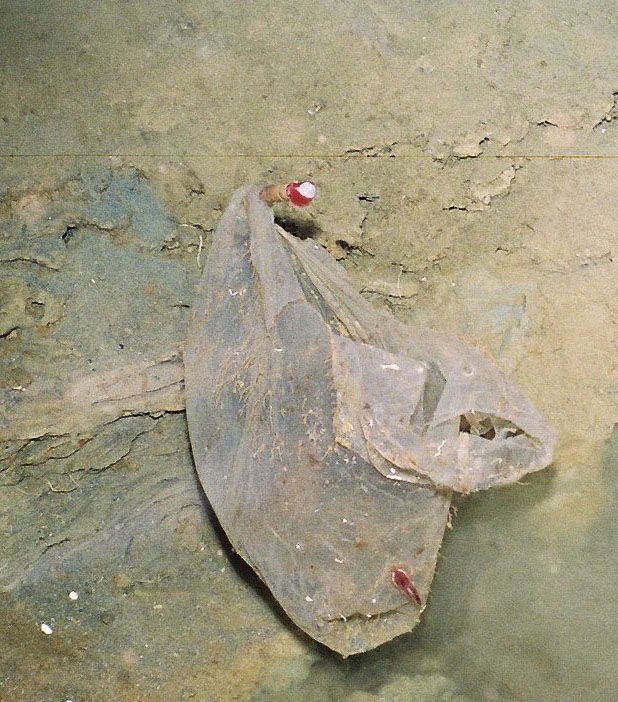 A plastic bag hangs from a deep-sea tube worm. The abyss-dwelling creature is of evolutionary importance for its ability to feed on minerals. (Photo courtesy of JAMSTEC)

Images of dolphins and seals tangled in fishing nets and stories of dead whales and sea birds with bellies full of plastic are moving illustrations of the impact marine plastics have on sea life near the surface. Deeper down, though, the effects of these pollutants are less well understood.

The oceans’ abyssal depths hide a treasure trove of genetic resources and biodiversity, including evolutionarily unique organisms that have yet to be studied fully. However, deep-sea species have slow growth rates, putting them at extra risk of extinction if ecosystems are damaged. The JAMSTEC database contains many troubling images of deep-sea creatures tangled in or living atop plastic debris. However, the remoteness and harsh conditions of the deep ocean limit the ability of researchers to observe the long-term repercussions plastics have on organisms and the ecosystems that surround them. 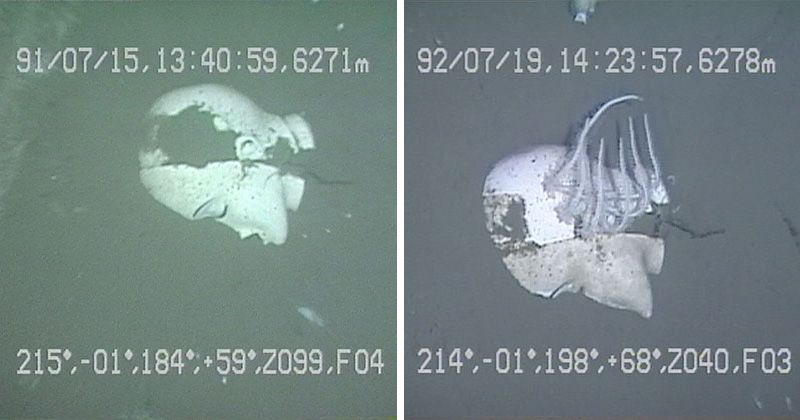 A mannequin head discovered at a depth of more than 6,000 meters was found a year later to have an unidentified deep-sea creature living on it. (Photo courtesy of JAMSTEC)

Our research uncovered the interesting phenomenon of creatures like sea anemones that attach to solid surfaces “hitching rides” on plastic waste and inhabiting areas with soft seabeds that would not ordinarily support them. This suggests that debris can disrupt fragile deep-sea ecosystems by providing platforms for invasive organisms to spread. Not all effects are observable, though. Scientists are still in the dark about the possible impact on species of chemicals emitted by microplastics. 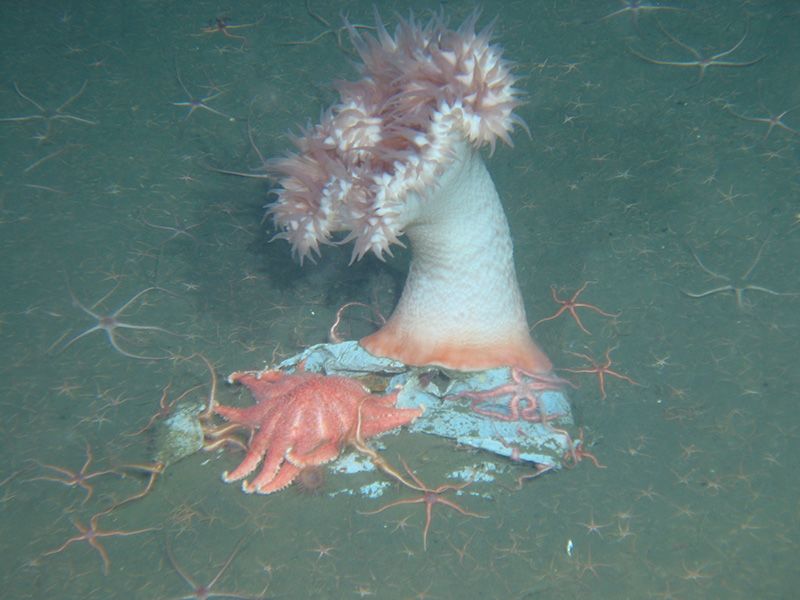 A sea anemone living on a plastic bag. Without a firm place to attach, such species would not be found on the soft, muddy sea floor. (Photo courtesy of JAMSTEC)

Stopping Plastics at the Source

Plastic debris poses a grave threat to the deep seas, but humans have the capacity to improve the situation. Although there is not yet an effective way to collect plastic waste that is already in the abyss, humanity can decrease the amount that reaches the oceans. One powerful rallying cry in the global drive against single-use plastics has been the slogan “reduce, reuse, recycle.”

The United Nations has been a standard bearer in protecting the oceans, making marine conservation one of the sustainable development goals of its 2030 Agenda. In June 2017 the body held its first-ever oceans summit to raise the awareness of the importance of healthy oceans. Then in December that year, at the General Assembly, it received strong commitments from member nations toward fulfilling the 2030 target of reducing plastic pollution. The UN Environmental Program is conducting a campaign to reduce single-use plastics called Clean Seas, and European and Asian nations that are major sources of marine plastics are rapidly rolling out production limits and taking legislative measures to address the issue. Regrettably, Japan is behind the global curve in its policies to reduce plastic pollution. I hope that as a nation deeply connected to the sea it will quickly take steps to rectify this situation.

In addition to international initiatives, bottom-up endeavors are gaining momentum. Recognizing the potential for innovation, businesses and entrepreneurs are steadily introducing new products and technologies, and civic groups are organizing local activities like beach-cleaning events that improve community literacy about plastic pollution. The media, too, has been influential in raising public awareness. In 2016 the documentary film A Plastic Ocean used startling imagery to create a powerful message about marine plastics, and in 2017 the visually spectacular Blue Planet II, narrated by the renowned British naturalist David Attenborough, was one of the most-watched science programs in Britain and the United States.

Compared to other pressing environmental concerns, governments and societies around the world have been relatively quick to address the problem of marine plastics. This is in part due to the highly visible—and entirely human-caused—nature of the issue. While addressing the complex mechanisms and ecological impacts of issues like global warming and ocean acidification can seem overwhelming, policymakers and the general public alike can readily link marine plastics to their own consumeristic behavior. If the “reduce, reuse, recycle” campaign proves successful, it will build further momentum toward eliminating marine plastics altogether.

Although the growth in public- and private-sector initiatives is a positive trend, governments still need to make greater use of scientific findings to create knowledge-based conservation and management policies. Preventing plastic waste from reaching the ocean and spreading around the globe is fundamental. However, greater emphasis is needed on understanding how debris is transported into the deep sea and collects on the seabed and how plastics degrade once they are on the ocean floor.

The vastness of the ocean makes it necessary for the international community to pool its resources to identify major sources of plastic pollution and the process by which marine plastics aggregate and reach the bottom of the sea. This includes prioritizing systems for monitoring and managing the ocean ecosystems at greatest risk, as well as the deep-sea ecosystems and their rich biodiversity. With so much still unknown about the effects of plastics on the deep-sea environment, the focus needs to be on creating knowledge-based approaches to get to the bottom of the issue.

Scientists studying marine plastics are not a unified lot. They are involved in diverse, and diversely funded, projects around the globe, utilizing varied techniques to study different aspects of the issue. However, researchers are beginning to collaborate in creating international frameworks for monitoring single-use plastics and microplastics and establishing data-sharing protocols. Going forward, such efforts by scientists will be crucial in forming effective approaches to reduce plastic pollution and assure the continued health of our oceans.